Trending
You are at:Home»Vegetables»Top 11 benefits of Rhubarb (Garden rhubarb) 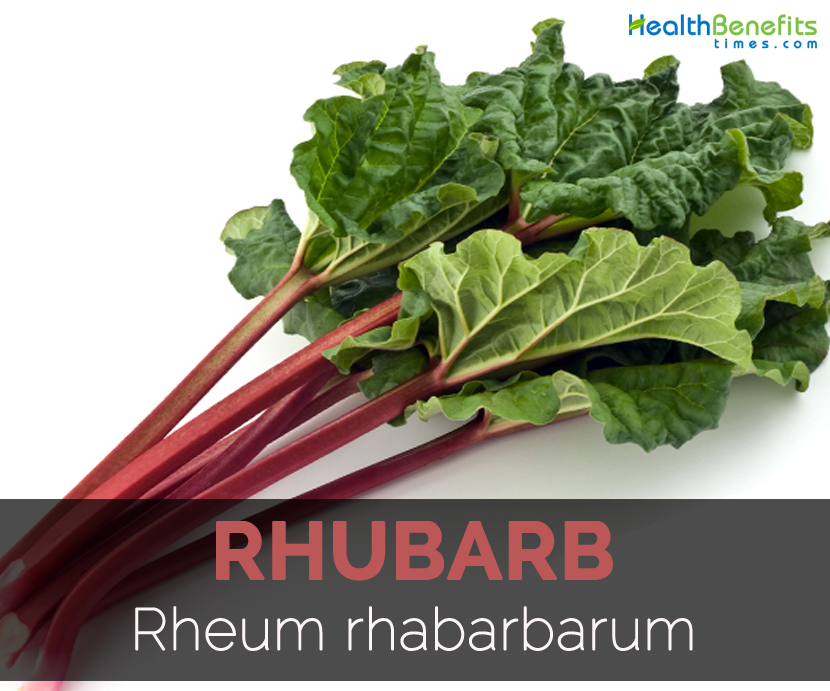 The plant grows up to 2-4 feet high and wide. The leaves are heart shaped, triangular and dark green of 30 cm as a diameter. The fleshy stems are red, pink or light green which is 12-18 inches long. The stalks are long, thin which resembles celery and grows up to 24 inches height and is deep red to light green. The hermaphrodite flowers are green white to rose red. Common varieties of Rhubarb are: Tilden, Victoria, Valentine, MacDonald, Crimson, Canada Red, Red Cherry and Ruby Red.

Rhubarb is native to Siberia. For over 5000 years, it is used as a medicinal plant in Asia. Rhubarb was the renowned vegetable in Asia but was not grown widely in the past. In the 1700s, it was introduced by European settlers which are mostly known as pie plant. In the Central Asia, Rhubarb is grown in wild. Over 2000 years ago, it was grown for its medicinal values. In the 16th century, Rhubarb got introduced to Britain and in 18th century, it became a food crop in the North America. Since 13th century, it was used for medicinal properties in Europe.

Rhubarb is rich in moisture among all the vegetable crops. It is low in calories due to which it could be added to the low caloric diets. Rhubarb is cholesterol fat and sodium free and an excellent source of Vitamin C and dietary fiber. It detoxifies the body and provides astringent properties. Other health benefits are discussed below:

Rhubarb is low in calories which help to lose weight easily along with the health maintenance. Only 21 calories is present in 100 grams of Rhubarb. Rhubarb has various organic compounds helps to burn down the fat and lose the weight. (1)

Rhubarb contains low amount of cholesterol and fat due to which its consumption has no threat to the cardiovascular ailments. It raises the HDL cholesterol levels as it possesses dietary fiber. It eliminates the cholesterol from the walls of arteries and blood vessels. Additionally, antioxidants found in Rhubarb eliminate the free radicals which lead to the harmful conditions and heart diseases. (2)

An adequate amount of dietary fiber in the body helps to regulate the digestive system. It bulk up stool and promotes the regular and smooth bowel movements. Traditionally, Rhubarb is used to treat constipation. It soothes the digestive ailments and constipation which can prevent from the various gastrointestinal ailments such as cramping, bloating and colorectal cancer. (3)

Rhubarb is a great source of Vitamin K which has a vital role in the neuronal and brain health. It eradicates the brain cells oxidation and promotes the cognition which helps to slow down the occurrence and growth of Alzheimer’s disease. (4)

Vitamin K prevents the brain from neural degeneration. It also promotes the repair and growth of bones along with the osteotrophic activities. Rhubarb contains the minerals and calcium which plays a vital role in the protection of bones.(5)

Antioxidants eliminate the free radicals from the body. Rhubarb has a good amount of lutein, zeaxanthin and beta carotene which acts as Vitamin A that helps to protect the eyes and skin from the harmful effects of the free radicals. The diet possesses antioxidants which slow down the cataracts, premature ageing, wrinkles and macular degeneration. In addition, the poluphenolic compounds prevents from the lung and oral cancer. (6)

Rhubarb contains an adequate amount of iron and copper which helps to enhance the new red blood cells production, raise the oxygenation of essential areas and increases the RBC count in the body. It also enhances the function and upgrades the overall metabolism of the body. (7)

Manganese is an aid for sprains and inflammation. It raises the superoxide dismutase levels due to antioxidant properties. The arthritis patients has low amount of Superoxide dismutase. SOD possesses anti-inflammatory properties which is essential for the arthritis patients. One should add manganese to the diet to raise the function and synthesis of SOD which helps to reduce the symptoms.(10)

Rhubarb is used for medicinal purposes in various countries. The roots are used as the traditional medicine. During Ottoman period, about 500 years back, Rhubarb was one of the vital ingredients for making medicinal paste. While the roots were investigated for the antimicrobial activities, the results were shown positive. (11)