Trending
You are at:Home»Herbs and Spices»Health benefits of Roman Chamomile 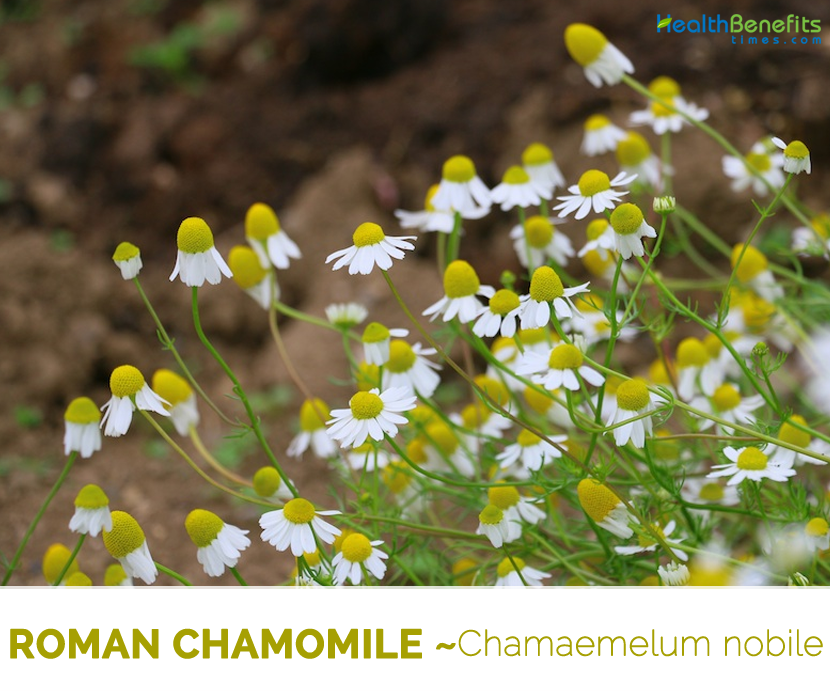 Chamaemelum nobile commonly known as chamomile, Roman chamomile, English chamomile, garden chamomile, ground apple, low chamomile, mother’s daisy or whig plant, is low growing carpeting hardy perennial plant found in dry fields and around gardens and cultivated grounds in Europe, North America, and in Argentina. C. nobile is, along with Matricaria chamomilla, an important source of the herbal product known as chamomile. Chamaemelum nobile is a member of the Asteraceae, or daisy family. The word chamomile, and the genus name Chamaemelum come from the Greek χαμαίμηλον (chamaimēlon), “earth-apple”,from χαμαί (chamai), “on the ground” + μήλον (mēlon), “apple”, so-called because of the apple-like scent of the plant. When crushed, the plant gives off a scent similar to that of apples or bubblegum, and this trait led to the origin of the common name; ‘chamaimelon’ means ‘ground apple’.

Roman Chamomile is a low growing carpeting hardy perennial plant that grows about 10 – 30 cm (12 inches) tall. It is found growing in dry fields and around gardens and cultivated grounds and prefers average, medium, well-drained soil. The plant has hairy stem and leaves are alternate, bi-pinnate, finely dissected, and downy to glabrous. The plant has solitary, terminal flower heads, rising 20–30 cm (8–12 in) above the ground; consist of prominent yellow disk flowers and silver-white ray daisy-like flowers. Flowering normally takes place from May to September. Fruit is cypselas obovoid, 1 – 1.5 mm long, smooth, with 3 faint striae on inner side, bald.

Flower heads may be dried to make chamomile tea, a soothing herbal tea that has been a significant folk medicine remedy for a variety of ailments including headache, colds, flu, stomach disorders and gastrointestinal disorders.

Recorded use of roman chamomile dates back to the time of the ancient Egyptians. It was used for fevers, skin care, etc. The word ‘chamomile’ comes from the Ancient Greek word ‘Chamomaela‘and means ‘ground apple’. It was probably named after its scent, as the plant has an apple like smell to it.

How to Take It