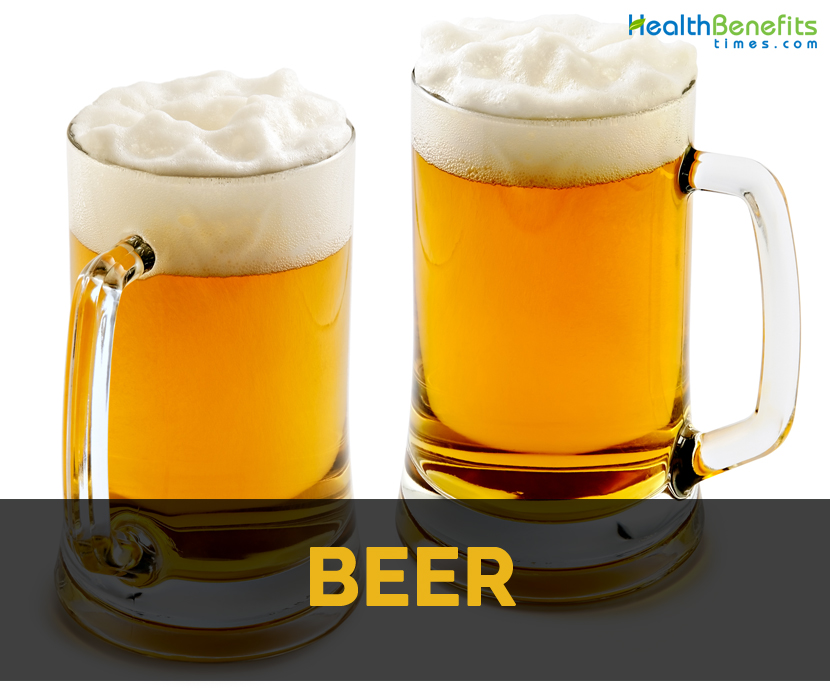 Beer is an alcoholic beverage which is made from the brewing method that contains the starch fermentation which is the derivative of malted barley, maize, wheat and rice. Hops are used as flavoring agent that acts as a natural preservative and adds bitterness to the beer. Brewing is the process which is used to make beer. It converts the source of starch to sugary liquid which is known as wort and this wort is turned into an alcoholic beer known to be beer by the fermentation process. The brewing process clarifies the fluid and gives a bright color to the beer. It is available in cans and bottles. The taste of the beer differs according to the varieties. Light and dark beers could be found in the market. Beer ranks the third position on the world’s popular drink after water and tea. It is regarded to be quite old fermented drink. Beer is the beverage which has low content of alcohol and has the ability to hydrate the body during summer season. Ales and lagers vary in the composition, color and content of alcohol. All types of beer use malt, water, yeast and hops as the basic components.

Beer is considered as the oldest beverage that dates back to 9500 BC or early Neolithic farmed cereal which was recorded in the history of ancient Egypt and ancient Iraq. It was figure out by archaeologists that beer was involve on the speculate that beer was instrumental in the development of civilizations. Before 5000 years, workers were paid in beer in the city of Uruk. The workers got limited supply of five liters of beer while building Great Pyramids in Giza (Egypt) that provides them nutrition with refreshment which is vital for the construction of pyramids. Beer reached to Europe as far as 3000 BC by Celtic and Germanic tribes. The early European beers contain fruits, various plants, honey, spices and narcotic herbs. Later hops was added that was mentioned in Europe Carolingian Abbot in 822 and Abbess Hildegard of Bingen in 1067 by.

Beer contains antioxidant properties that help to increase the density of bones, prevent coronary disease, dementia, lowers cardiovascular ailments and assist digestion. It possesses an anti-aging properties kidney stones, gallstones, diabetes, hypertension and osteoporosis. In Europe and North America, mostly the people prefer wines with meals. It contains more Vitamin B and protein in comparison to wines. While brewing beer, hops are used to brew beer that is the great source of flavonoids and possess antioxidant properties.

Xanthohumol is a flavonoid which is available in hops that is mostly used to brew beer. It also helps to prevent cancer such as prostate cancer. The study shows that it is an excellent source of polyphenols because of the grains which are used for the fermentation of beer. It also effectively fights with cancer such as red wine. (1)

Vitamin B6 is found in beer that helps to prevent the heat ailments by eliminating the buildup of homocysteine. It prevents the development of clots that blocks the coronary arteries. It has blood thinning properties. It should be consumed in moderate amounts which lower the chances of inflammation, atherosclerosis, buildup of plaque in the artery walls and blood vessels.

The consumption of beer in moderate amounts helps to raise the density of bones by preventing the chances of osteoporosis and fractures.

The study shows that moderate intake of beer lowers the chances of type 2 diabetes.

Beer is an excellent source of folic acid and Vitamin B12. Its deficiency results in anemia. The presence of Vitamin B12 is vital for the memory, concentration and normal growth.

The blood pressure could be reduced with a daily intake of beer in comparison to the people who consume other spirits or wines.

Beer has the ability to raise potency as well as the Vitamin E impact that acts as antioxidant in the body. It helps to maintain the skin health that also slows down the process of aging.

The daily intake of beer in the limited amounts affects the level of cholesterol and reduces the concentration of bile that also lowers the chances of gallstones formations.

The intake of the beer enhances the HDL cholesterol levels about 10 to 20% and also lowers the chances of cardiovascular ailments and dementia.

Beer is low in sodium and rich in potassium. It is an excellent source of magnesium that lowers the chances of kidney stones formation. Beer has silicon in it which the body absorbs and prevents the chances of osteoporosis.

Beer has diuretic properties which increases urination in people. It helps to eliminate the waste materials and toxins from the body.

Beer is an excellent source of soluble fibers that promotes the overall health. It cleanses the digestive tracts and is beneficial for the heart.

It is an aid for insomnia. The intake of warm beer before sleep helps to slow nervous system and relax.

The intake of beer hinders the level of the blood sugar. Livers help to convert glycogen which is reserved as glucose and released in the blood stream. Beer has alcohol that may obstruct in this process.  It generates the hunger pangs which makes the person to consume the food. It could result in weight gain. So meal should be consumed properly before taking beer.

Thought the beer has low nutrients it is packed with calories. This results in the burning of low calories than normal. Liver converts the alcohol of the beer into acetate. The acetate is burned by the body for the energy and surplus fat is remained in the belly or hips.

A beer possesses soothing properties. Beer slows down the release of antidiuretic hormones that assist to absorb the fluid by the body. The intake of beer results in the frequent urination. It is not beneficial for the athletics. The fluid is lost through sweat and urination.

Most of the beer contains malted barley that has gluten which is a protein. Some might be sensitive to gluten so they should choose the gluten free beer.

The limited intake of beer is helpful for the heart but the cardiovascular patients should avoid it because it worsens the condition of heart problems.

The high intake of beer for a day can result in pierce in the level of blood pressure. One should consume only two glasses of beer to maintain the control over the blood pressure level.

Some stimulants found in beer work with gastric acid that results in the gastro oesophageal reflux and also cause heart burn.

The excessive intake of beer provides a beer belly which is rigid and very troublesome to eliminate it. So the people should not drink beer who wants to have a slim waist.

The high intake of beer also affects the motor skills and nerves which could result in accidents.

Erythromycin and sedative interacts with the beer which could be harmful for the health. The antibiotics may also interact with beer which could result in the side effects such as vomiting and headache.