Trending
You are at:Home»Fruits»Facts about Sand Cherry ~ Prunus pumila 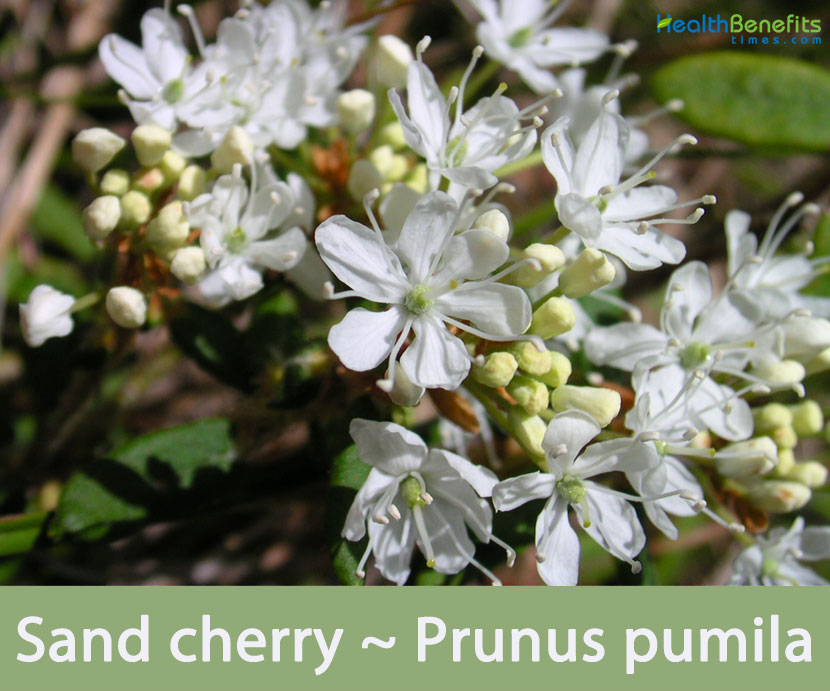 Prunus pumila, commonly known as sand cherry, is a North American species of cherry in the rose family Rosaceae. The plant is native to eastern and central Canada from New Brunswick west to Saskatchewan and the northern United States from Maine to Montana, south as far as Colorado, Kansas, Indiana, and Virginia, with a few isolated populations in Tennessee and Utah. It grows in sandy locations such as shorelines and dunes. Some of the well-known popular names of the plants are Dwarf American Cherry, Sand cherry, Western sand cherry, Eastern sand cherry, Great Lakes sand cherry and Sesquehana sand cherry.

Sand cherry is an unarmed, diffusely branched, low growing deciduous shrub that normally grows to 2-6 feet tall depending on the variety. The plant is found growing in sand dunes, calcareous rocky shores, beaches, outwash plains, cliffs, balds, or ledges, shores of rivers or lakes, talus and rocky slopes, inter dunal flats, in Upper Peninsula and Lower Peninsula, rocky ledges, pavements, and summits. The plant requires a well-drained moisture retentive soil. The plant grows in the wild on sandy, gravelly, and rocky soils, dunes, beaches, and outwash plains – sites are typically dry and excessively drained. It thrives in a loamy soil, doing well on limestone. It prefers some chalk in the soil but apt to become chlorotic if too much is present. The plant forms dense clonal colonies by sprouts from the root system. Stems are usually erect-ascending and sometimes decumbent.

Leaves are simple, leathery and alternate, 4–7 centimeters (1.6–2.8 in) long and up to 2-3 centimeters (1 inch) wide. The blade is narrowly elliptic or widest near the tip (obovate) depending on the variety, with a pointed tip and tapering at the base to a ¼ to ½ inch stalk. The upper surface is dark green and somewhat shiny, the lower surface lighter and smooth. Edges are finely toothed except near the base. 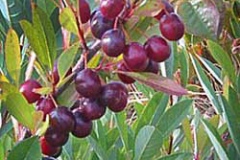 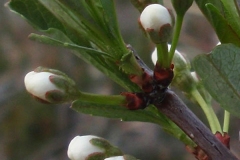 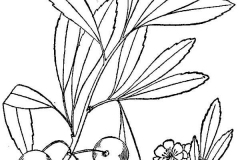 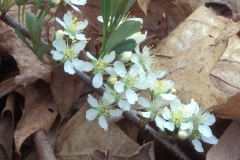 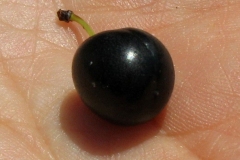 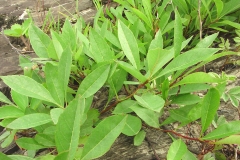 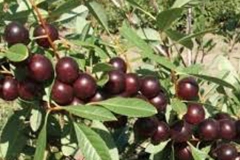 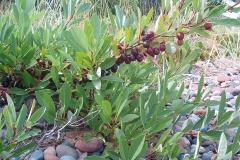 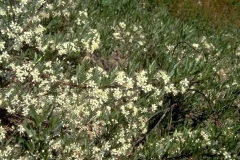 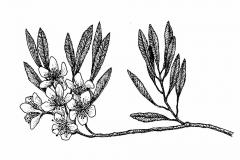 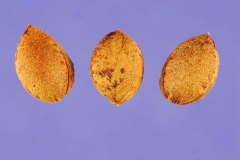 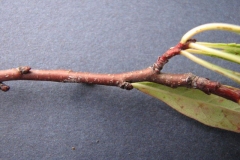 Numerous flat to convex clusters from lateral buds along the branches, each cluster a 1 to 3-flowered umbel (stalks all arising from the same point) and emerging before the leaves in spring. Flowers are about ½ inch across with 5 white, round to egg-shaped petals with a single slender style and a spray of slender, white, yellow-tipped stamens in the center. The 5 sepals are about 1/3 the length of the petals, lance-oblong, rounded at the tip, spreading, with several small glands along the edges near the tip. Inner and outer surfaces are smooth. Flower stalks are slender and hairless.

Fertile flowers are followed by a small shiny globose cherry 13–15 millimeters (0.51–0.59 in) in diameter. It is reddish purple ripening to dark purple or nearly black in early summer. Each fruit consists of a single hard seed inside.

Fruits S
Share. Twitter Facebook Google+ Pinterest LinkedIn Tumblr Email
Previous ArticleHow To Ensure That The Culture of Food Safety Is Maintained In Your Restaurant
Next Article What Are The Health Benefits Of Olive Oil?