Trending
You are at:Home»Herbs and Spices»Facts and benefits of Saw palmetto 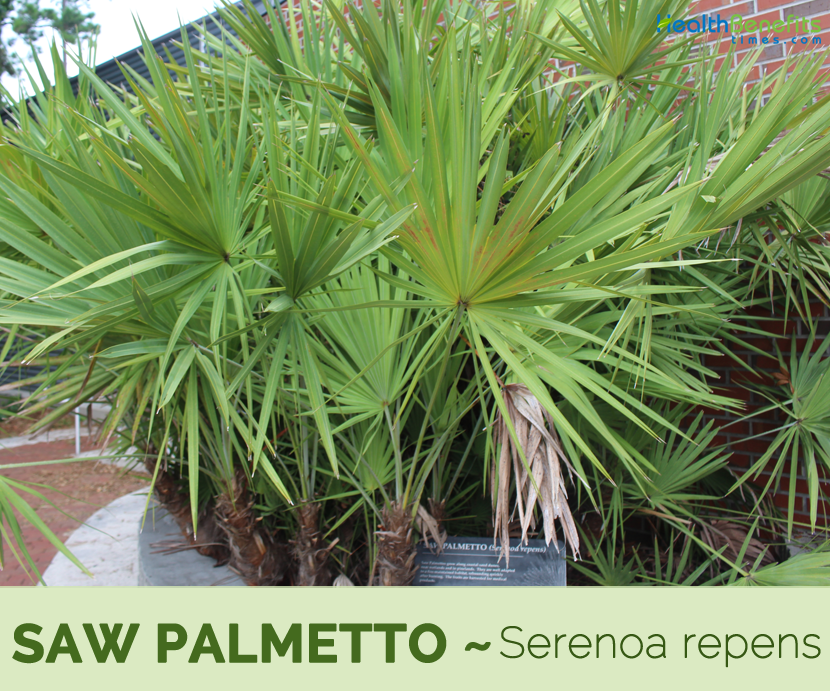 Saw palmetto is also known by its scientific name, Serenoa repens is a type of fan palm that usually grows together in clumps and it mainly grows along the Gulf Coast of the United States. Its common names are Scrub Palmetto, Silver Saw Palmetto, American dwarf palm tree, Cabbage palm, Sabal, fan palm, and scrub palm, Sabal Fructus, Fructus Serenoae, Sägepalmenfrüchte, Sägepalme and Old Man’s Best Friend. The plant is native to subtropical Southeastern United States, most commonly along the south Atlantic and Gulf Coastal plains and sand hills. It is the only member of the Serenoa genus that have been used for centuries as a tonic, topical cleanser against germs, and to remedy urinary and reproductive disorders in men. European and American settlers used saw palmetto for a wide range of ailments.

In the early 1900s, men used the berries to treat urinary tract problems, and even to increase sperm production and boost libido. Today, the primary use of saw palmetto is to treat benign prostatic hyperplasia (BPH), a non-cancerous enlargement of the prostate gland. It is also an ingredient in a number of prescription medications commonly prescribed by doctors in Europe.

Saw Palmetto is a hardy plant; extremely slow-growing, and long-lived, with some plants, particularly in Florida possibly being as old as 500–700 years. As a shrub, it grows to a height of 2 to 7 feet (0.6-2.1 m) and as a tree, it may reach 20 to 25 feet (6.0-7.5 m).The plant is found growing in Miami rock ridge pinelands, the dry pineland portions of Big Cypress National Preserve, and commercial plantations. It prefers dry, very well-drained soils, and avoids swamps and poorly drained river terraces. Saw palmetto may also grow on peaty and poorly drained sites. It has a creeping, horizontal growth pattern.

Leaves are fan-shaped, evergreen with a bare petiole terminating in a rounded fan of about 20 leaflets. The petiole is armed with fine, sharp teeth or spines that give the species its common name. The leaves are 1–2 m in length, the leaflets 50–100 cm long. They are similar to the leaves of the palmettos of genus Sabal.

Flower is yellowish-white, about 5 mm across, produced in dense compound panicles up to 60 cm long. Flowering normally takes place from April and July. Fruit is fleshy, elipsoid drupe, irregularly-spherical to oblong-ovoid, slightly wrinkled, being from 1/2 to 1 inch long and about 1/2 inch in diameter.  Fruits are green or yellow before ripening but become bluish or black as it matures. It is an important food source for wildlife and historically for humans. The plant is used as a food plant by the larvae of some Lepidoptera species such as Batrachedra decoctor, which feeds exclusively on the plant. The health benefits of saw palmetto come from its berries, or drupe fruit. Saw palmetto extract is derived from these berries and is extensively available over the counter in capsule or tincture forms. Saw palmetto is also an ingredient in a number of prescription medications commonly prescribed by doctors in Europe. The saw palmetto is particularly slow-growing, with some specimens living up to 700 years.

Saw palmetto is an outstanding herb for both men and women and is used by natural health practitioners to treat a number of ailments such as testicular inflammation, urinary tract inflammation, coughs and respiratory congestion. It is also used to reinforce the thyroid gland, balance the metabolism, stimulate appetite and aid digestion. This wonderful herb is becoming famous for its uses in hair restoration, prostate health, sexual vigor, breast enhancement and as a nutritive tonic.  Now, let’s take a closer look at the many health benefits of saw palmetto.

Prostate cancer is one of the main causes of mortality for men. This form of cancer is mainly dangerous because it is related with prostate enlargement, something that naturally happens as men age. Saw palmetto extract helps to reduce prostate enlargement by inhibiting dihydrotestosterone, which encourages cellular reproduction in the prostate. This lowers the chances of developing prostate cancer, eliminating painful urination and the discomfort that accompanies prostate issues. Saw palmetto is also known to speed healing and reduce bleeding in men undergoing prostate surgery.(1)

Because of saw palmetto’s hormonal impact on the body, some men have started using saw palmetto to stimulate hair growth as they age. Studies have shown a negative correlation between saw palmetto use and male-pattern baldness symptoms, so if your hair is beginning to thin out, consider some supplementation to wind back the clock. (2)

There are some benefits of saw palmetto for women, the most highly researched and admired health benefits are for men. Saw palmetto extract has long been known as a herbal treatment for impotence. Exact pathway that saw palmetto takes in terms of sexual organs and hormones is still somewhat unclear, but the research has certainly piled up showing that it can boost your sexual performance and increase virility.(4)

Saw Palmetto has been known to boost the immune system, particularly for mild conditions such as colds, coughs, and sore throats. Headaches and migraine sufferers have also claimed that saw palmetto works as an anti-inflammatory agent and reduces pain and discomfort. This is harmonized with saw palmetto’s other anti-inflammatory activities in the body, mainly in the urinary tract and gut.(5)

Urinary organs weaken with age, which is why incontinence is much more common in the elderly population. Research suggests that saw palmetto has strong chemical components that can strengthen urinary organs to prevent incontinence, and also improve the health of the kidneys. If you are at risk of developing kidney stones or already suffer from them, saw palmetto supplementation can be a great way to prevent future issues or treat current problems.(6)

Saw palmetto has been known to increase sex drive and libido in both women and men. Although the hormonal impact of saw palmetto mostly affects testosterone pathways, as a natural aphrodisiac, women can also get a bit more energy in their intimate steps with saw palmetto supplementation.(7)

According to NutritionalSupplementsHealthGuide.com Saw palmetto helps to reverse a condition known as hirsutism (which male-patterned hair growth in women). Hirsutism may be caused by an overabundance of male hormones, especially testosterone. It’s theorized that saw palmetto may block the overproduction of testosterone, thus alleviating unwanted hair, says SawPalmettoFacts.com.