Trending
You are at:Home»Herbs and Spices»Facts about Showy Rattlebox ~ Crotalaria spectabilis 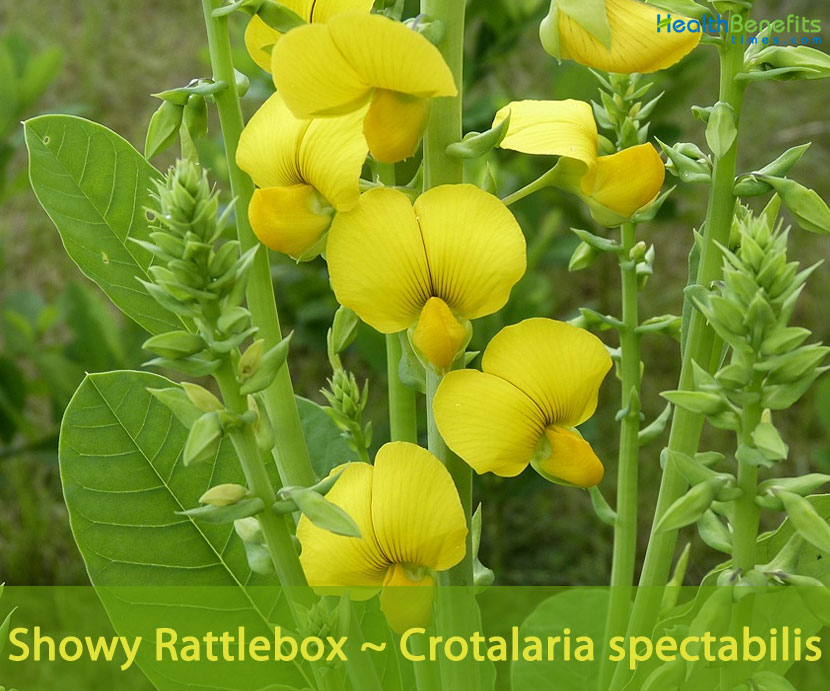 Crotalaria spectabilis commonly known as Showy rattlebox is an erect, much-branched plant belonging to Fabaceae ⁄ Leguminosae (Pea family). The plant is native to tropical Asia, but is now distributed pantropically. It has been planted widely and has naturalized in many tropical countries, including south-eastern United States, Hawaii, and Puerto Rico. Apart from Showy rattlebox it is also known as Indian rattlebox, Showy crotalaria, Yellow crotalaris, Rattlebox, Showy Rattlepod, Silent rattlepod, Greater rattlepod, cat’s bell and rattlepod.

The genus name Crotalaria is derived from the Greek word crotalon, which means castanet and refers to the rattling sound the seeds produce when the dry, inflated pods are shaken. The plant is harvested from the wild for local use as a food and medicine. It is often grown as a soil improver and stabilizer, having the added benefit of being able to reduce soil nematode populations. It is also often grown as an ornamental, valued especially for its long flowering season.  As a member of the legume family, it was carried to the United States to be used as a cover crop to help set nitrogen in dry sandy soils. Showy Crotalaria is toxic to livestock, as it consists of high levels of alkaloids, which commonly cause issues in cattle and horses in the southeastern states.

Showy rattlebox is an erect, summer herbaceous, much-branched annual to perennial plant that normally grows up to 2 m in height and 3.5 cm in basal diameter. The plant is found growing in Montane grasslands, along trails, forest margins,  as a weed of cultivated fields, open fields, open ground, roadsides, along railroad tracks, in pastures, wastelands, and disturbed areas. This plant grows best in full sun, is drought tolerant and doesn’t need a lot of water. The plant is supported by a tap and lateral system of stiff, tan roots.

The plant normally has a single stem. The lower stems are covered with whorled, short, shelf-like old leaf bases and stipule remnants. Leaves and fruiting branches are shed progressively upward after they mature so that foliage and branches are only found on the upper portion of the stem. The mid- and lower stem has a white, brittle, medium-hard wood with a 1.5-mm pith. The upper stem, branches, and foliage are green to yellow-green.

Leaves are simple, alternately arranged on the stem with persistent stipules. They are obliquely oblong-ovate, acuminate and measuring 3-10 mm long and 2-8 mm wide. The petiole is 2-8 mm long. The blade is oblanceolate to obovate, and measuring 8-14 cm long and 3-8 cm wide. The narrowest part of the leaf is attached to the stem and the widest part is at the tip. Leaves are generally smooth or hairless above while the lower surface is densely hairy (pubescent).

The inflorescence is 15-50 cm long which is rather lax and with many-flowered raceme. The bracts are persistent, cordate, measuring 10-20 mm long and 5-10 mm wide, and acute or acuminate. The pedicel is 8-13 mm long. The bracteoles are 1-2 mm long and lance-shaped. The hairless sepal is bell-shaped, measures 11-14 mm long, and with 5 unequal lobes which are longer than the tube. The petal is yellow.  The wings are obovate-oblong, and measuring 9-18 mm long and 5-9 mm wide. The keel measuring 10-14 mm long and 4-9 mm wide is rounded about the middle, with a short, incurved and twisted beak. The 10 stamens are united into one group by their filaments. The anthers are dimorphic, with 5 long, basifixed anthers on a short filament that alternate with 5 rounded dorsifixed anthers which are on a long filament. The ovary is narrowly oblong and hairless. Flowering normally takes place in between November and January. 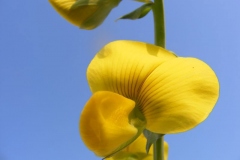 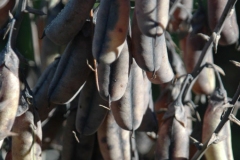 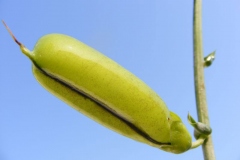 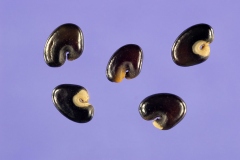 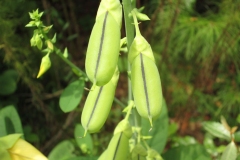 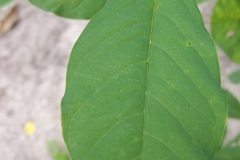 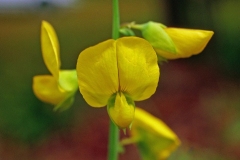 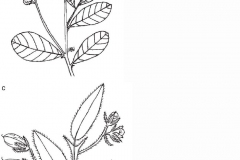 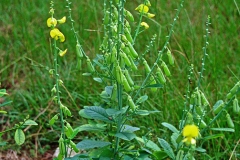 Fertile flowers are followed by cylindrical pods (legumes) measuring 4-5 cm long and 1.5-2.5 cm wide, which look inflated, that darken at maturity. Fruits are initially green in color, but as they mature, they turn brown to dark brown with 20-24 seeds.  When mature, seed may break free inside the pods and create a rattling sound when shaken; hence the name rattlebox. Seeds are kidney shaped, small, and brown to black at maturity measuring about 3.5 mm long and 4 mm wide, with the radicular side incurved. Seed are considered very toxic.

No widespread biological controls are utilized for showy rattlebox.

Small patches of showy rattlebox can be mechanically removed by hand. Remove plants prior to fruit ripening to avoid seed dispersal. Hand removal can be slow and labor intensive. In pastures, clipping can be an effective method of weed management to minimize exposure of grazing animals to plants that are toxic. Repeat as necessary to minimize likelihood of consumption by livestock and seed production. Care should be taken to prevent contamination of forages that will be fed as hay or silage to livestock with showy crotalaria. In feed grain crops, such as corn or soybean, care should be taken to avoid contamination of harvested grains with showy rattlebox seed. Sanitation should be used to prevent the movement of seed on tillage or harvest equipment from one field to other fields.

Physical controls are not widely used for showy rattlebox