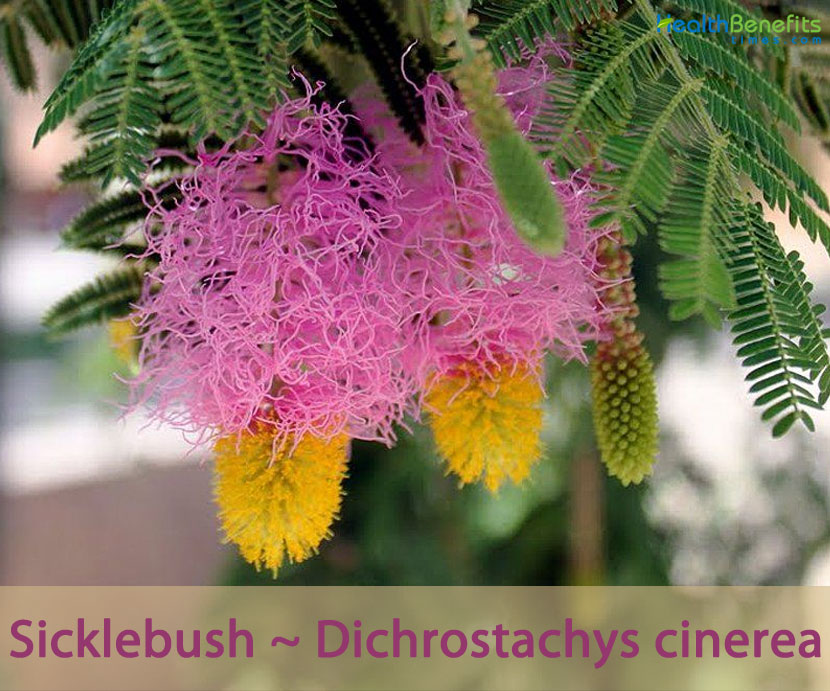 The generic name Dichrostachys means ‘two-colored spike’, referring to its two-colored inflorescence, from the Ancient Greek δί- (di-, ‘twice’), χροός (khroos, ‘color’), and στάχυς (stakhus, ‘ear of grain’). The specific name cinerea is from the Greek ‘konis’ and Latin ‘cineres’, referring to the grey hairs on the subspecies confined to India. The species is most commonly known as the ‘sickle bush’ derived from the curved shape of the pods. The plant is covered with spines and is occasionally suckering and thicket-forming. It is a true multi-purpose tree, providing food, medicines, fuel and various commodities. Bark, roots, and leaves are used in the treatment of dysentery, headaches, toothaches, elephantiasis, snakebites and scorpion stings, leprosy, syphilis, coughs, epilepsy, gonorrhea, boils, and sore eyes. It has a strong capacity for natural regeneration and used in soil conservation. Bark produces strong fiber used as twine. Debarked roots are used for racks and baskets. The wood is used as walking sticks, handles, spears, and tool handles.

Sicklebush is a highly variable thorny, deciduous or semi deciduous shrub or small tree that normally grows about 1 – 8 meters tall with occasional specimens to 12 meters with a rounded crown about 3 m wide. The crown is often umbrella shaped, sparse, flattish and rather untidy. Trunk may be twisted and is less than 23 cm wide.  When mature it may become deeply fissured and dark grey-brown. The plant is found growing in poor, occasionally clayey soils, in brushwood, thickets, hedges, teak forest and grassland to elevations of 1,700 meters. It often forms widespread thickets by means of root suckers. The plant succeeds in a range of soils from clays, through loams to sandy soils. It requires a well-drained soil and also succeeds in poor soils. It requires little water and full sun. Mature plants can withstand moderate frost, but young plants must be protected from frost. It grows fairly quickly and requires frequent pruning to keep it neat. Due to its size and very thorny nature, it is not suited to small gardens.

Bark surface is nearly smooth to rough or deeply fissured, dark grey to greyish brown, peeling off in strips, inner bark is thick, fibrous, yellowish white; crown open, with spreading branches; lateral twigs with sharp spines at apex, short-hairy. Prominent light Lenticels are present.  Lateral Branches tend to occur near the base and are spinescent (having or becoming spiny) and the single Spines are almost alternatively arranged and are not in pairs.  Each spine is up to 8 cm long and ends in a sharp point that may be slightly recurved.

This deciduous tree has alternate, bipinnately compound leaves similar to those of the acacia and is up to 20 cm long.  They may appear in a bundle on dwarf spur branches or are clustered on the spines.  There may be up to 41 pairs of olive-green leaflets. The leaflets may be slightly glossy above and dull below.  They are small up to 12 mm long and 3mm wide and obovate or lanceolate.  Leaves close up soon after picking and are best observed on the tree.  The hairy rachis has long, protruding thin glands between some of the pairs of pinnae. These glands end in a pinhead-like tip.  The petiole has no gland and is up to 5 cm long.

The impressive bisexual and sessile flowers are borne in leaf axils and are actinomorphic.  They are scented and found in pendulous, cylindrical bicolored spikes up to 8 cm long.  The flowers closest to the stem are infertile, pinkish-mauve or white and have protruding staminodes.  Color may vary even on the same tree. Flowers at the end of the hanging spike are bisexual and bright yellow.  This arrangement clearly indicates the distinctive difference between itself and the acacias.  Calyx is bell-shaped and has 5 Sepal lobes which end tooth-like.  Bell-shaped corolla has 5 non-overlapping petal lobes.  There are 10 yellow stamens in bisexual flowers and these occur in 2 whorls of 5 each.  These extend slightly beyond the petals.  Anthers have stalked glands.  There is a single Pistil (a unit of the Gynoecium, the female element of the flower, composed of the Ovary, Style and Stigma). Flowering normally takes place from September to June in Indonesia and October to February in South Africa.

Fertile flowers are followed by curled, twisted, sickle shaped and leathery indehiscent pod.  Each spike produces a mass of flat, coiled pods.  They are distinctive clustered together with many other pods. Fruits are initially green turning to dark brown, hard and up to 10 cm long and 1.5 cm wide before falling.  Each pod consists of up to 4 black smooth seeds.  Some seeds may have more than 1 embryo.  The flattened, glossy brown, compressed, ovoid to ellipsoid seeds, about 4-6 mm long and 3-45 mm wide is released when the pod decays on the ground.

The plant is native to Africa, Indian subcontinent and North Australia and introduced to the Caribbean and parts of Southeast Asia. In Ethiopia, the species is common in the Nechisar National Park. The tree was brought to the Caribbean in the 19th century. In Cuba, where it is known as El Marabú or Marabou weed, it has become a serious invasive species problem, occupying close to five million acres (20,000 km²) of agricultural land. Plans are underway to exploit it as a source of biomass for renewable power generation. 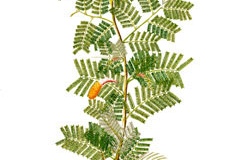 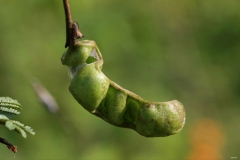 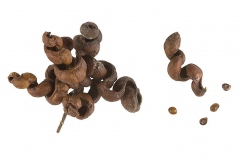 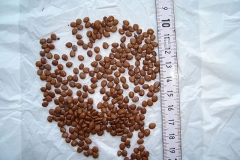 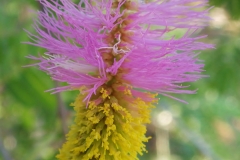 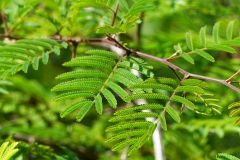 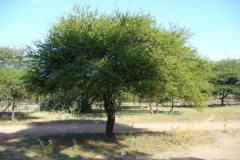 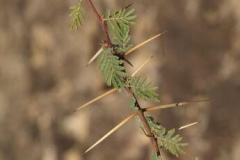 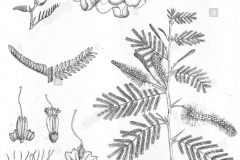 Traditional uses and benefits of Sicklebush