Trending
You are at:Home»Herbs and Spices»Health benefits of Silver Birch
Betula pendula, commonly known as silver birch, is a medium-sized deciduous tree, which is classified under Betulaceae family. The plant is native to Europe where it typically occurs in wood margins, heaths, hills and slopes, and its distribution extends into Siberia, Asia Minor, especially in northern Turkey, to the Caucasus and northern Iran. It has been introduced into North America, where it is known as the European white birch, and is considered invasive in some states in the United States and in parts of Canada.The tree can also be found in more temperate regions of Australia. It has been widely planted in Canada and the northern U.S. as an ornamental.

Some of the popular common names of the plants are Silver Birch, European white birch, Common Birch, Warty Birch, European White Birch, East Asian white birch, bed wen, birk tree, lady birch, lady of the woods and weeping birch. It is believed that the name “Birch” comes from the Indo-European word “bhereo”which means glossy white. The genus name Betula comes from the Latin”bitumen” (= mineral pitch, asphalt), because the Gauls often made a kind of bitumen from Birch sap. The epithet pendula refers to the drooping male inflorescence (catkins), up to 10 cm long and the overhanging branches.

Silver Birch is a fast growing, striking, medium-sized deciduous tree that grows about 15 to 25 m (49 to 82 ft.) tall (exceptionally up to 31 meters (102 ft.)) with a slender trunk usually under 40 cm (16 in) diameter. The plant is found growing in dry and moist forests, eskers, rocky hills, drained mires, various marginal scrub, also a park and forestry tree. It is best grown in medium to wet, well-drained sandy or rocky loams. The root system of the silver birch varies according to soil conditions. Tap root is formed on dry places (e. g. sandy dunes). Shallow roots develop on wet sites and on spoil heaps, mined land or bare land. The root system can be deep and lateral roots achieve even 40 m in length.

The bark is whiter than downy birch with scattered black fissures. The young twigs are typically covered in white ‘warts’, and feel rough to the touch. The bark becomes much more rugged with diamond shaped cracks as it gets older.

Leaves are alternate, simple, and 3-7 cm long, broadly ovate, triangular or rhomboidal, doubly and unequally serrate. The upper surface is dark green, the underside is brighter green. Young leaves with rare hairs are sticky. Petiole is up to 3 cm long. Leaves from sprouts are big, heart-shaped and hairy. Stipules are up to 8 mm long, falling early. The foliage is a pale to medium green and turns yellow/ brown early in the autumn and start to drop at the end of October.

Silver birch is monoecious and begins to flower at age 10 years if open-grown, and at age 20-25 years in a stand. Silver birch is monoecious, meaning both male and female flowers (catkins) are found on the same tree, from April to May. Male catkins are long and yellow-brown in color,and hang in groups of two to four at the tips of shoots, like lambs’ tails. Female catkins are smaller, short, bright green and erect. It fruits every year but full seed years occur every 2 to 3 years.

After successful pollination (by wind), Silver birch produces many small winged fruits (achenes) containing at least one seed without endosperm. The small 1 to 2 mm winged seeds ripen in late summer on pendulous, cylindrical catkins 2 to 4 cm (0.8 to 1.6 in) long and 7 mm (0.3 in)broad. The seeds are very numerous and are separated by scales, and when ripe,the whole catkin disintegrates and the seeds are spread widely by the wind. One tree can produce many thousands of seeds each year.

The word birch is probably anciently derived from the Sanskrit bhurga, “a tree whose bark is used for writing upon,” and the thin peeled bark has been used for this purpose. Via the proto- Indo-European root of bherag, it transmuted into the Old German birka. From its uses in boat-building and roofing it is also connected with the Anglo-Saxon beorgan, “to protect or shelter.” Bunches of birch sticks, or “fasces,” incorporating an ax were used as a symbol by Italian Fascists, supporters of Benito Mussolini. 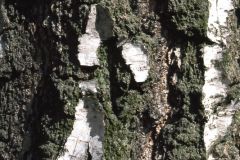 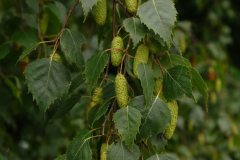 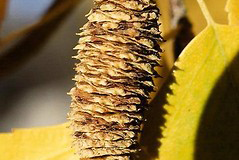 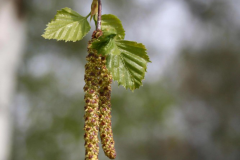 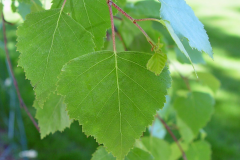 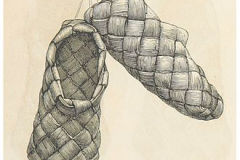 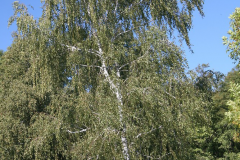 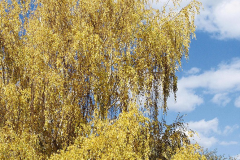 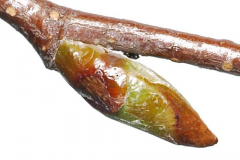 Birch leaves can be consumed in the form of a tea to help boost the body’s immune system. Leaves consist of antiviral and antibacterial properties that help protect the body against infection and also speed up recovery from any infection that you may have. Birch leaf tea also contains numerous natural antioxidants in the form of flavonoids and vitamin C which can further improve general health and help to reverse the damage done to the body by free radicals.

Drinking a few cups of birch tea made with the leaves and the bark can help to stimulate your digestive system and improved overall digestion. Because of its anti-inflammatory nature, it is highly effective in relieving digestive upset. The tea can also be used to relieve common digestive complaints like a cramp, abdominal pain, bloating and diarrhea.

Leaves also possess mild laxative properties meaning that they can be consumed to help relieve constipation and support more regular bowel movement. It has also been used throughout the centuries as a general digestive tonic.

Like many herbal teas, birch leaf tea may help promote a good night of sleep if you drink a cup or two before bedtime. The effects are probably mild and improbable to help you overcome more serious sleep issues,but if you are simply feeling a little on edge, it is worth giving it a go.

5. Beneficial for skin and hair

Leaves and the bark of birch tree consist of astringent properties making them an effective treatment for numerous skin conditions.Birch bark also contains excellent anti-inflammatory and antibacterial properties making it a good natural treatment for numerous inflammatory skin conditions. Conditions that birch may help treat include eczema and dermatitis.

To treat your skin with the leaves, soak birch leaves in a jug of water for at least a few hours and then strain the solution. Use the leaf water to wash your skin paying particular attention to the affected areas.Bathing in water infused with birch leaves is another effective way of treating the skin, prevent dandruff and to help strengthen your hair roots.

Birch leaves can also be added to a compress to treat the irritation or to relieve joint pain while you may also be interested in making your own oil.

Birch leaves can be used to make a tea or juiced to help treat inflammation or infection in the urinary tract. It may also help treat edema and flush the kidneys. Birch leaves have diuretic properties meaning that a tea made from them can help promote both the volume and the frequency of a person’s urination. This, in turn, helps to flush uric acid, toxins and excess fluids throughout the body. It can also help maintain good liver and kidney health and may even help eliminate unsightly cellulite.

Birch trees have spiritual importance in many historical religions and are related with elves in Gaelic folklore. As such, birches frequently appear in Scottish, Irish and English folklore in association with death or fairies, or returning from the grave.