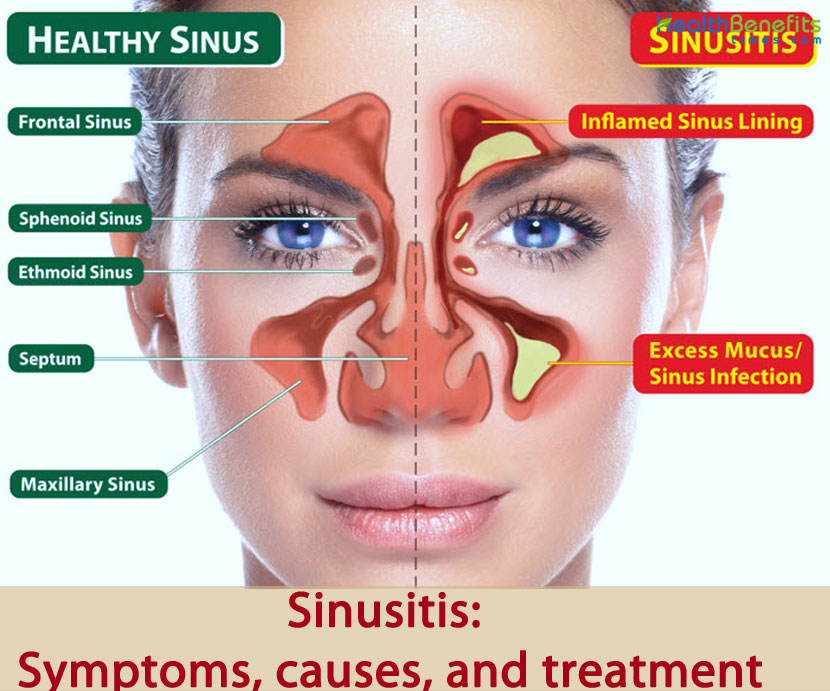 Sinusitis is one of the most common healthcare complaints in the United States. It is actually an infection or inflammation of the sinuses, the air-filled pockets in the bones of the face. Of all the human body’s mysterious components, the sinuses are among the most puzzling. Some scientists believe that the sinuses function mainly as mucus factories for the nose and throat. Others say these hollow chambers help warm the air we breathe, still others that they exist merely to lighten the skull.

All humans have four pairs of sinuses (below, right), which connect to the nasal passages through a series of holes and interconnections. Mucus forms on the surfaces of the sinuses, which are also covered with tiny hairs called cilia. When we breathe, the mucus traps dirt brought in by the air; then the cilia push the mucus out through tiny openings that serve as drains. These openings, known as ostia, are very small, in some cases measuring only a few millimeters across. While the frontal, sphenoidal, and ethmoidal sinuses have ostia at the bottom, the maxillary sinuses have their ostia at the top. Consequently, mucus has to drain upward from these cavities, against the pull of gravity. Given that humans walk erect, it’s not surprising that sinus problems are common.

Sinusitis occurs when the mucus-producing linings of the sinuses become inflamed, and by far the most frequent cause of this condition is blockage of the ostia. Once these openings are clogged, foreign material can’t get out, oxygen levels drop, and bacteria in the nasal cavity slither into the sinuses, causing the sinus walls to swell and fill with pus. If the infection doesn’t go away, the body sends in disease-fighting cells to kill the bacteria. Unfortunately, these well-intentioned bodyguards can themselves do considerable damage to the sinus walls. Defender cells can damage the cilia, the hair like structures that help expel foreign matter. Furthermore, scarring caused by the cells’ battles can result in the formation of sores. Large, mushroom-shaped growths called nasal polyps can also appear inside the nose, interfering with breathing and setting the stage for other problems. Almost invariably, the invading bacteria seek out and colonize adjacent sinuses. More than 40 percent of all sinusitis patients, are affected in more than one pair of sinuses.

The most common cause of blockage of the ostia is an upper respiratory tract viral infection, such as a common cold or the flu. These conditions increase secretions in the nasal passage ways, provoke swelling of the sinus walls, and cause the cilia to malfunction. Allergic reactions can have the same effect. Hay fever often leads to sinusitis, but allergies to dust, animal dander, foods, smoke, and other pollutants can also trigger reactions that result in blocked sinuses.

In some cases, the ostia are blocked by unusual anatomical features like preexisting nasal polyps, a deviated septum, foreign bodies, or tumors. Certain diseases, including diabetes and HIV infections, can create a predisposition to sinusitis. And people with poorly working mucus and ciliary functions, such as patients with cystic fibrosis, have a better-than-average chance of coming down with the condition. Sinusitis is also common among people with chronic tonsillitis and adenoid problems.

In most cases, doctors diagnose sinusitis based on their “clinical impression,” or the sum total of your symptoms, medical history, and the results of a physical examination. Some doctors prefer to verify this impression with a test called trans-illumination. In this procedure, the doctor shines a special flashlight into your nose and examines the roof of your mouth for signs of sinus congestion. Unfortunately, trans-illumination might not pick up an infection in a deep, distant sinus. Your doctor may also order an x-ray of your sinuses, but even this technique may not be sensitive enough to detect a deep infection.

Doctors often go ahead and assume you have sinusitis and prescribe medications accordingly. If your body doesn’t respond after several attempts, they begin other tests. An otolaryngologist (ear, nose, and throat doctor) may insert a tiny tube into your nose and examine the sinuses directly, a technique known as an endoscopy. A CT scan can show swelling in the deep sinuses and reveal any anatomic abnormalities, but even these scans are not always reliable.

The goal of most treatments is to open up the sinuses and restore proper drainage. If the sinuses are infected with bacteria, it is important to kill the disease organisms before they cause further damage or spread to other sinuses.

Before you start treating sinusitis, make sure you actually have it; sinusitis can be hard to distinguish from an upper respiratory tract infection, dental disorder, asthma, or even a headache.

The bugs that most often invade the sinuses are frequent residents of the nose and throat— Streptococcus pneumoniae and Hemophilus influenzae (H. flu). These pathogens usually respond to such tried-and-true antibiotics as ampicillin and amoxicillin. However, because certain strains of H. flu have developed resistance to amoxicillin, some doctors prescribe other medications, such as sulfamethoxazole and trimethoprim, cefaclor, and amoxicillin and clavulanate. More-expensive choices are loracarbef, azithromycin, and clarithromycin.

Treatment usually lasts 7 to 14 days for acute cases, and from 2 to 3 weeks for chronic or recurrent cases.

Many alternative therapies are attempts to relieve the pain of sinusitis and open the sinuses for drainage. Others aim to fight infection by boosting the immune system.

Applying gentle pressure to the face and hands can help ease the pain of sinusitis.

An acupuncturist will apply medium stimulation to various ear points such as adrenal, forehead, internal nose, lung, and near the sinuses to help drain the sinuses.

Inhalants of eucalyptus, pine, or thyme may help break up your clogged sinuses. You may also alleviate the symptoms by holding menthol or eucalyptus packs over your sinuses. Other suggestions: Gently swab your nasal passages with oil of bitter orange, or massage your face with essence of lavender mixed into vegetable oil.

The exact makeup of a prescribed mixture depends on whether the sinusitis is “hot” (acute or infectious) or “cold” (chronic or allergic). Either way, the preparation may include the Chinese herb ephedra (Ephedra sinica), a decongestant. (Do not use ephedra if you have hypertension or heart disease.) A number of other Chinese herbs are also helpful in relieving sinusitis symptoms. These include honeysuckle (Lonicera japonica), fritillary bulb (Fritillaria cirrhosa), tangerine peel (Citrus reticulata), xanthium fruit (Xanthium sibiricum), and magnolia flower (Magnolia liliflora).

A good healthful diet including fruits and raw green vegetables can help stimulate secretions and break up sinusitis. Nutritionists also suggest the following supplements to the diet: vitamin C, 500 mg every two hours; bioflavonoids, 1 gram per day; beta carotene (vitamin A), 25,000 IU per day; and zinc lozenges, 23 mg every two waking hours for up to one week. Stay away from foods that you suspect may trigger an allergic reaction.

♦ Inhale steam from a vaporizer, a humidifier, a mixture of hot water and vinegar, or even a cup of tea or coffee. Steam is one of the best and least-expensive remedies for unclogging sinuses.

♦ Use warm compresses on your nose to help open your sinuses.

Call Your Doctor If

♦ Sinusitis develops into an inflammation around the eye (orbital cellulitis), which could cause damage to the eye and facial nerves.

♦ the condition does not improve within seven days.

♦ Sinusitis recurs more than three times in a year, and periods between bouts grow shorter; you may have a chronic infection that could become serious.

It’s difficult to prevent sinusitis, but you can reduce your chances of having your sinuses become infected. First, avoid allergenic substances. Allergens that people don’t often think of include the dust in their beds and certain foods, such as dairy products and wheat. Whenever possible, avoid cigarette smoke. Note: People with diabetes, cystic fibrosis, and certain other diseases may be prone to sinusitis.

Stopping the antibiotic treatment prematurely may increase the infection’s duration or severity.

Besides antibiotics, many doctors prescribe inhaled steroids such as beclomethasone or triamcinolone to reduce inflammation and open the sinuses so they can drain. Decongestants can also reduce swelling and help unclog the sinuses. Most doctors prefer oral decongestants, including pseudoephedrine, over nose sprays like oxymetazoline because sprays can become habit forming if used for more than three days.

Drugs containing guaifenesin are used to break up hard, encrusted mucus, but they generally don’t work very well. Antihistamines are not usually prescribed for sinusitis because they tend to make mucus thicker and less able to drain from clogged sinuses. Antihistamines may provide some relief, however, if your condition is caused by allergies.

When sinusitis becomes chronic and other remedies fail, physicians may suggest a sinus washout or surgery. Washout procedures, in which the doctor uses a sterile saline solution to clean out the nasal passages, are rarely performed today. Instead, surgeons prefer surgical techniques such as antrostomy, which involves drilling a hole at the bottom of the frontal sinus to improve drainage. In another procedure, called endoscopic sinus surgery, physicians insert a tiny scope through the nose. Not only does the scope allow doctors to see the insides of the nasal cavities, but it also serves to open clogged passageways and remove dead cells from the sinus wall. About 80 percent and 90 percent of patients report moderate to complete relief of symptoms with endoscopic surgery. Extremely rare side effects of this procedure include meningitis, blindness, or double vision.