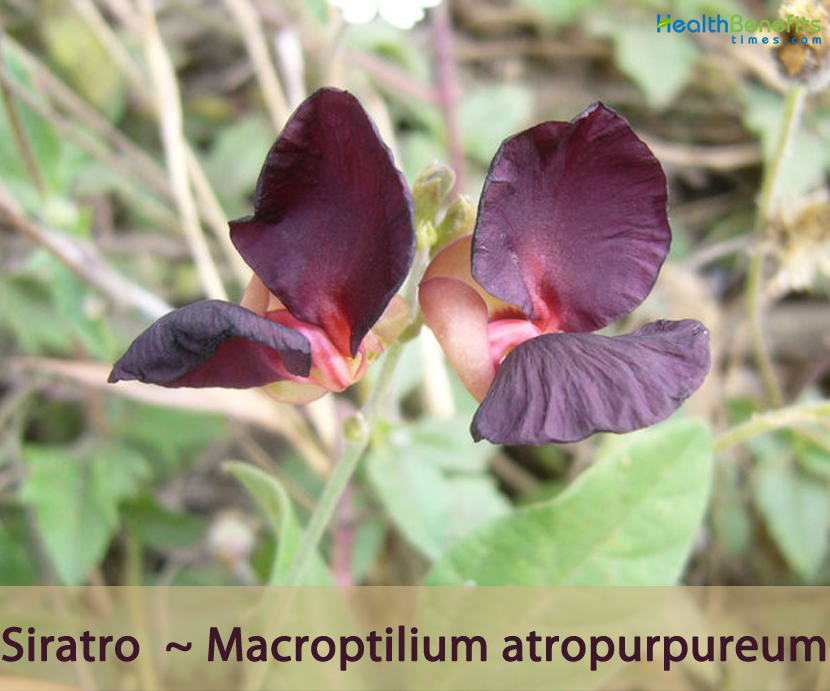 Siratro scientifically known as Macroptilium atropurpureum is a tropical herbaceous dicot belonging to the Fabaceae / Leguminosae (Pea family). The plant is native to Central America (i.e. Belize, El Salvador, Guatemala, Honduras, Nicaragua and Panama), and South America (i.e. Texas), as well as the Caribbean Islands. It has been known to grow in some regions of southern North America, including Mexico and the USA in states such as Arizona, Texas, Florida, and Hawaii, as well as coastal regions in Queensland and New South Wales, Australia, and scattered regions across Africa, Southeast Asia, Madagascar, India and the Pacific Islands. Few of the popular common names of the plants are atro, purple bushbean, purple-bean, siratro, surple bean, atro siratro, cowpea, macroptilium and phasey bean.

Genus epithet Macroptilium means large feather in Greek, a probable reference to the plant’s compound leaves. Species epithet atropurpureum means very purple, describing the plant’s very dark red, almost blackish flowers. It has been introduced for use as a food for stock to many tropical regions around the world. It has become an invasive pest plant in a number of areas, including the north-eastern coast of Australia. Rich in protein, M. atropurpureum is commonly used for cattle pastures intercropped with grass, used in hay, or as a ground cover to prevent soil erosion and to improve soil quality. Siratro is regarded as an environmental weed in Queensland, the Northern Territory, northern Western Australia and northern New South Wales. Siratro is also a problem in revegetation sites, where it smothers young trees and shrubs before they become established. It spreads by cuttings and seeds.

Siratro is a long-lived, trailing, climbing or twining, herbaceous perennial plant with creeping (i.e. decumbent) or climbing stems usually growing 2-3 m long. It stems may occasionally reach up to 5 meters or more long and up to 5mm in diameter; they scramble over the ground and grow into other plants for support. The plant is found growing in disturbed sites, waste areas, roadsides, fences, gardens, coastal environs, urban bush land, secondary forests, riparian forests, ungrazed areas, edges of mangroves, forest margins, watercourses (i.e. riparian areas) and plantation crops (e.g. sugar cane). It is mostly found in high rainfall tropical and sub-tropical coastal areas but is occasionally also present in warmer temperate regions and in wetter habitats in semi-arid and arid inland areas. The plant occurs on a wide range of soils ranging from dark cracking clays, to yellow and red clays, to littoral dunes, red sands and gravels. It thrives in friable soils, but declines fairly rapidly in hard-setting soils.  It is tolerant of moderate levels of soil Al and Mn, and better tolerance of salinity than most tropical forage legumes.  While preferring deep, well-drained soils of moderate fertility, some collections have been made at poorly drained sites and on infertile soils.

The plant has deep swollen taproot, up to 2 cm in diameter from which stems arise. The stems close to the ground may root from the nodes under favorable conditions

The stems are ribbed lengthwise and hairy (i.e. pubescent). The stem is cylindrical, full, creeping or climbing, branched, reaching up to 2 m in length. Older stems at the base of older plants are fibrous and about 5 mm thick, while younger stems are slender (1-2 mm thick) and green in color. Stems close to the ground may develop secondary roots, usually on light soils when the soil surface remains continuously moist for some weeks. Stem is densely hairy with white hairs.

The compound leaves are 6.5-12 cm long, each have three leaflets (i.e. they are trifoliate). These leaves are alternately arranged along the stems and borne on stalks (i.e. petioles) 2-5 cm long. Individual leaflets are 2-7 cm long and 1-5 cm wide and are almost oval (i.e. elliptic), egg-shaped in outline (i.e. ovate) or somewhat diamond-shaped (i.e. rhombic), but the two side (i.e. lateral) leaflets on each leaf are usually slightly lobed. They otherwise have entire margins and their undersides are usually densely hairy (i.e. pubescent). There is also a pair of small leafy appendages (i.e. stipules) 3-5 mm long at the base of each leaf stalk (i.e. petiole). The leaves are often covered with hairs.

The pea-shaped flowers are dark reddish-purple or reddish-black in color and several (6-12) are crowded toward the tips of long flower stalks (i.e. peduncles) 10-30 cm long. Each flower is 1.5-2.6 cm long and is borne on a very short stalk (i.e. pedicel) 1-2 mm long. They have a small upper petal (i.e. standard), two large side petals (i.e. wings) and two pinkish lower petals that are fused together (i.e. into a keel) and strongly twisted or coiled. They also have five small green sepals 5-10 mm long that are fused together at the base in to a short tube (i.e. calyx tube), ten stamens, and an elongated ovary topped with a style and stigma. Flowering occurs throughout the year but mostly during January to May. 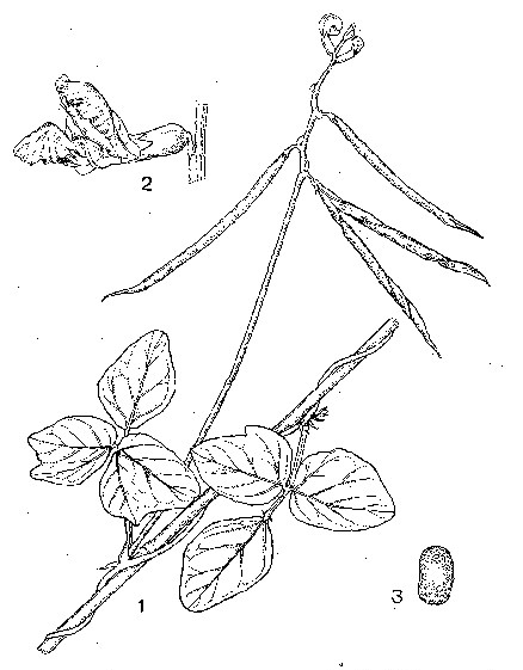 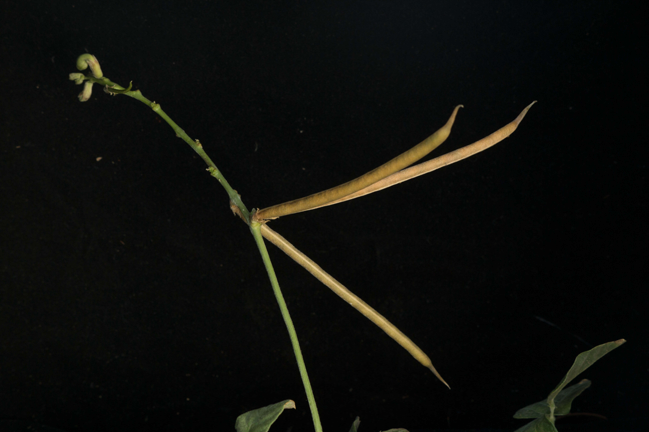 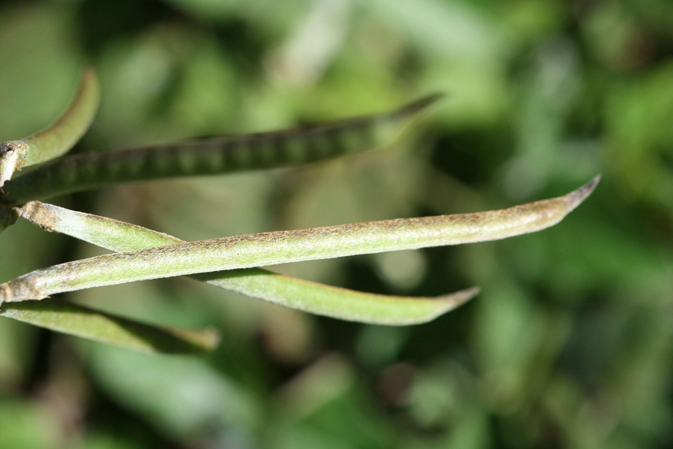 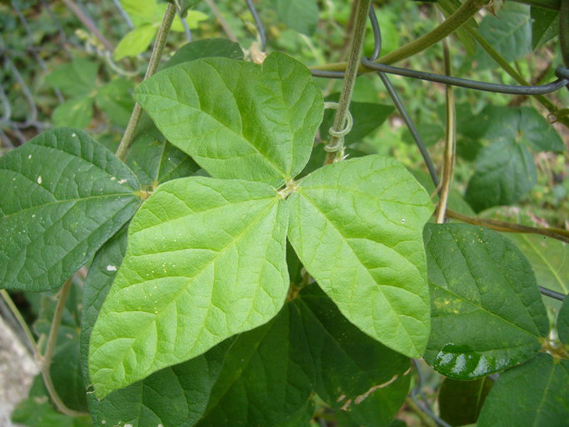 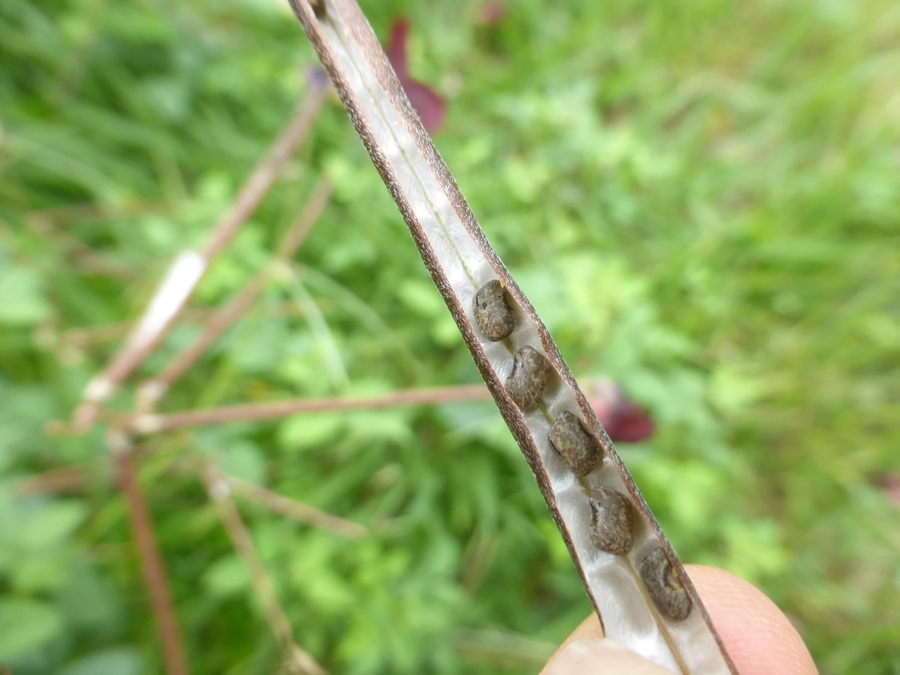 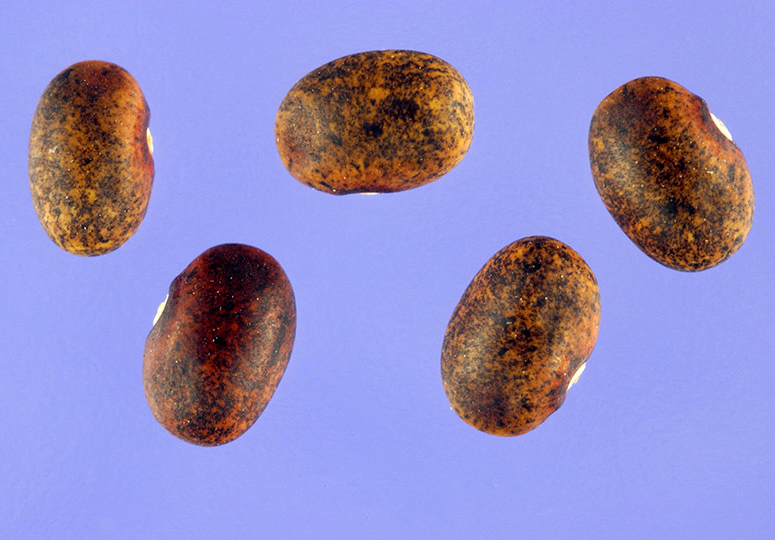 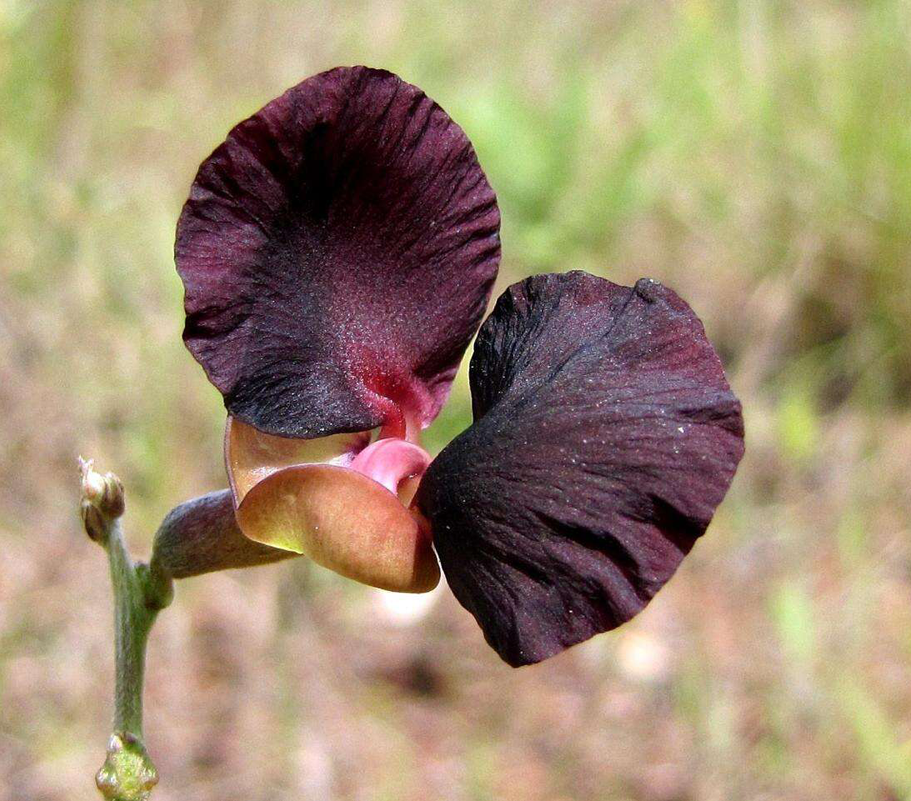 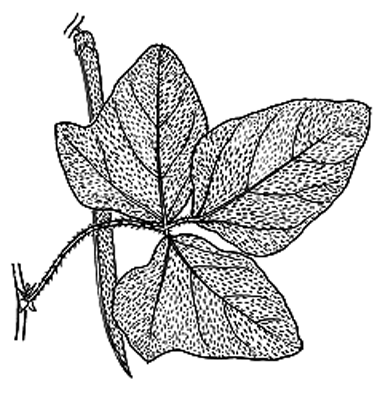 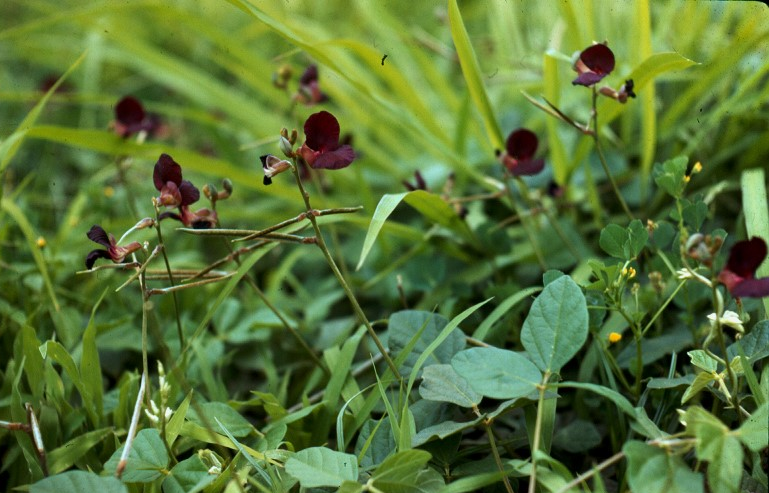 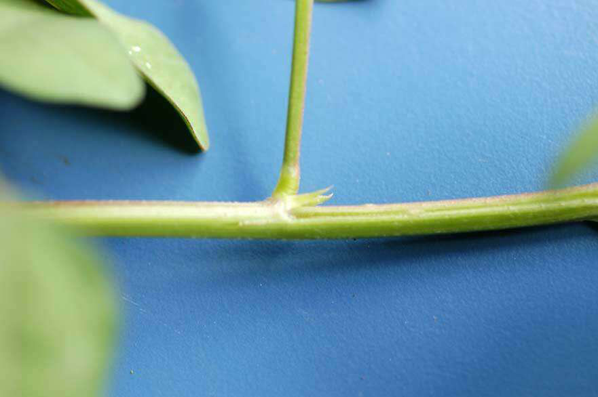 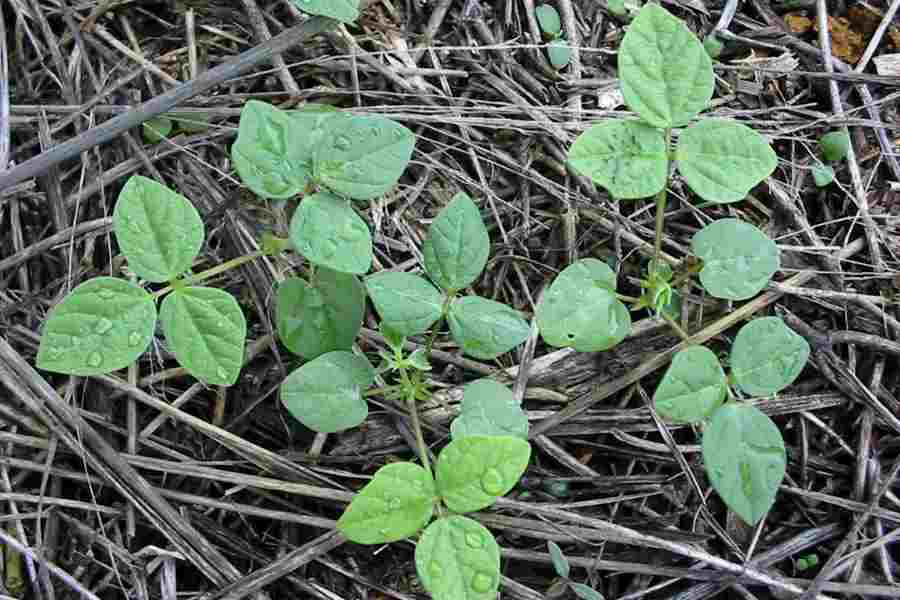 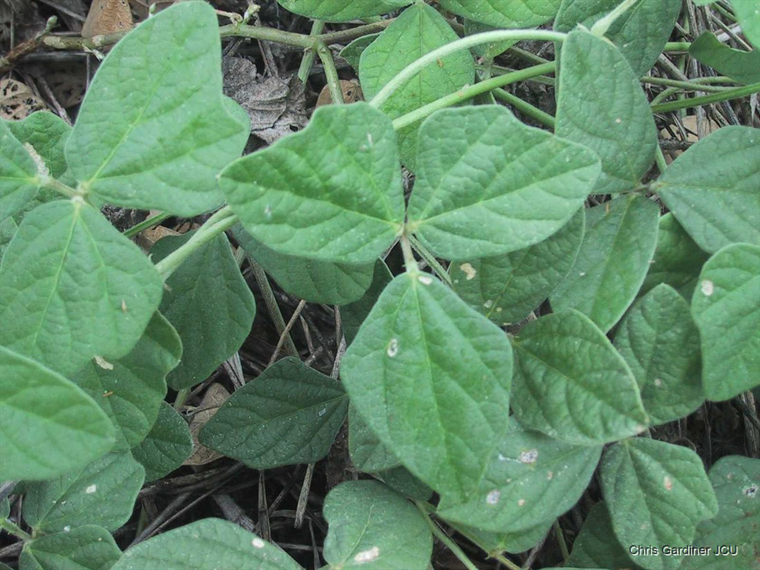 Fertile flowers are followed by long, straight and narrow (i.e. linear) cylindrical pods. They are initially green turning to brown in color as they mature. These pods are 5-10 cm long and 3-5 mm wide and are shortly hairy (i.e. pubescent) and split open when mature to release about 12 seeds. The seeds are about 4 mm long and 2 mm wide and are somewhat egg-shaped (i.e. ovoid) or slightly kidney-shaped (i.e. reniform) and speckled light brown and black.

Sown in areas with rainfall between 700-1,500 mm/ann. Leaf disease can be a problem in higher rainfall environments. It is relatively drought resistant, possessing a deep taproot and an ability to minimize evapo-transpiration through its hairy leaves.

Is adapted to a wide range of soils from friable sandy to clay soils including cracking clays in a wide pH range between 4.5-8 (water). It performs best in moderately fertile, friable soils, but responds to fertilizer, particularly P, S and Mo on poorer soils. It declines rapidly in hard-setting soils. It is intolerant of flooding or waterlogging.

Grows best in the subtropics and higher altitude tropics with day temperatures of 27-30ºC; growth is poor below 18ºC.  Leaves are burnt by light frost.  More severe frosts kill the plant back to the crowns, but plants recover with the onset of warm, moist conditions.

The plant is mainly used for permanent and short-term pastures.  While best suited to grazing, it can also be used for cut-and-carry or conserved as hay (usually with an associated grass), although the twining habit can make harvesting difficult.  Its value as a protein bank for dry season feeding is reduced by its tendency to drop leaf under very dry conditions.

It is also used for soil conservation (re-vegetation/stabilization of earthworks in cuttings and on embankments), and as a cover crop, fallow crop (including after lowland rice), or as a forage crop sown with upland rice. When used as a short-term ley legume in sorghum crops, the nitrogen benefit can persist for up to 3 crops of sorghum.  However, large populations of the twining legume can regenerate from hard seed in the soil, creating difficulties in grain harvest.

M. atropurpureum can be hand pulled, chipped or mowed. Removing the whole crown by grubbing is the most effective manual/mechanical control method.

In Australia, the herbicides triclopyr, picloram and glufosinate ammonium have been approved for the control of environmental weeds, including M. atropurpureum, in non-agricultural areas, bush land and forests (Queensland Department of Agriculture and Fisheries, 2016). M. atropurpureum is also susceptible to bentazone, 2, 4-Dichlorophenoxyacetic acid and 4-(2, 4-Dichlorophenoxy) butyric acid.