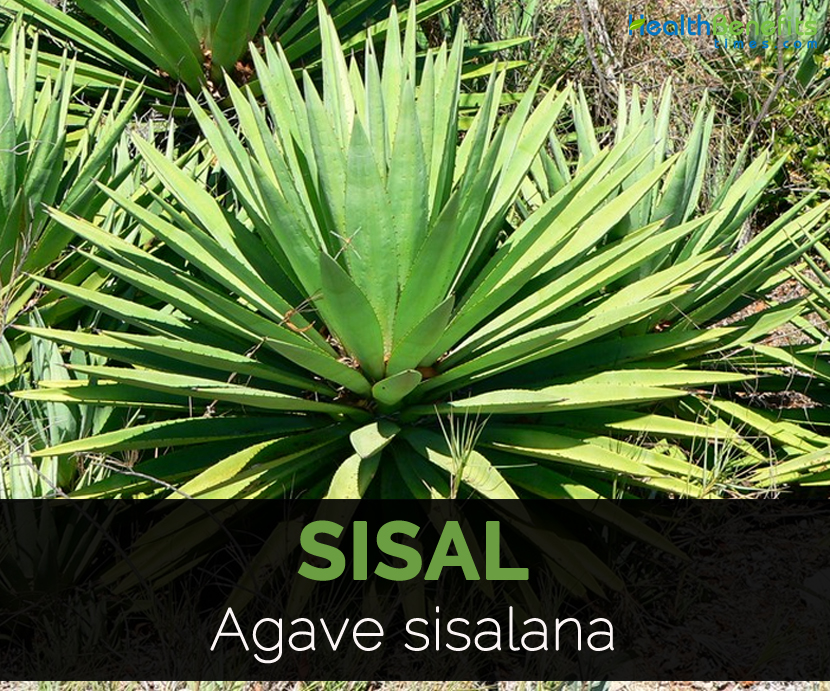 Agave sisalana, also known as Sisal is an agave which possesses a stiff fiber that is used for making rope, twine and also dartboards. This term refers to the plant or fiber which depends on context. Sometimes, it is incorrectly referred to as sisal hemp as hemp was used as a major source of fiber for centuries so due to this other fibers were named after it. The origin of the plant is uncertain. It is considered to be inherent of Yucatan. In 19th century, the cultivation of Sisal spread to Florida, Brazil and the Caribbean islands and also Africa, Kenya, Tanzania and Asia. In late 1930s, the first commercial plantings were made in Brazil and in 1948, the first Sisal fiber exported were made. Till 1960s, the Brazilian production accelerated and many spinning mills were established. Brazil is regarded as the world’s largest producer of Sisal. The cultivation of Sisal provides both positive and negative environmental impacts. Traditionally Sisal fiber is used for twine, ropes and also has other uses such as cloth, paper, hats, footwear, bags, dartboards and carpets. Sisal twines and ropes are employed widely for agricultural, marine, general industrial use and shipping. The fiber is used to make rugs, matting, brushes and millinery.

Agave sisalana is a robust and monocarpic herbaceous perennial plant having short thick stem measuring 120 cm by 20 cm. It has basal rosette of leaves which is 1.5 to 2 meters high. When young, leaves are glaucous, linear to lanceolate, straight and are about 100 to 150 cm long by 10 to 15 cm wide. Inflorescence is 2 to 8 meters tall, a panicle on a long peduncle and branching at upper half. Braches are widely spreading measuring 30 to 100 cm by 2 cm. Each branch bears 40 flowers and inflorescence branches after anthesis bears numerous bulbils. Flowers are erect, protandrous, strongly odorous and pale yellowish green. Tube is 1 to 2 cm long with obovate to oblanceolate lobes on an inner side of the top with tuft of haris. Fruit is an ellipsoid capsule in green that turns black when matured and contains 150 seeds. Seeds are thin, flat, black and rounded to deltoid.

Sisal is the leading material for agricultural twine due to its durability, strength, ability to stretch, resistance to deterioration in saltwater and affinity for certain dyestuffs. Besides twines, ropes and general cordage, Sisal is used in specialty paper, buffing cloth, dartboards, geotextiles, filters, carpets, mattresses, Macrame and wire rope cores. It is used as environmentally friendly strengthening agent to replace fiberglass, asbestos in composite materials in various uses including automobile industry. Low grade fiber has high content of cellulose and hemicelluloses which is processed by paper industry. Medium grade fiber is used by cordage industry for making baler, ropes and binder twine. After treatment high grade fiber is converted into yarns and used by carpet industry. Cat scratching posts, spa products, rugs, lumbar support belts, cloths, slippers and disc buffers are the products made from Sisal fiber.

Brazil is the largest producer of sisal producing 113,000 tonnes.