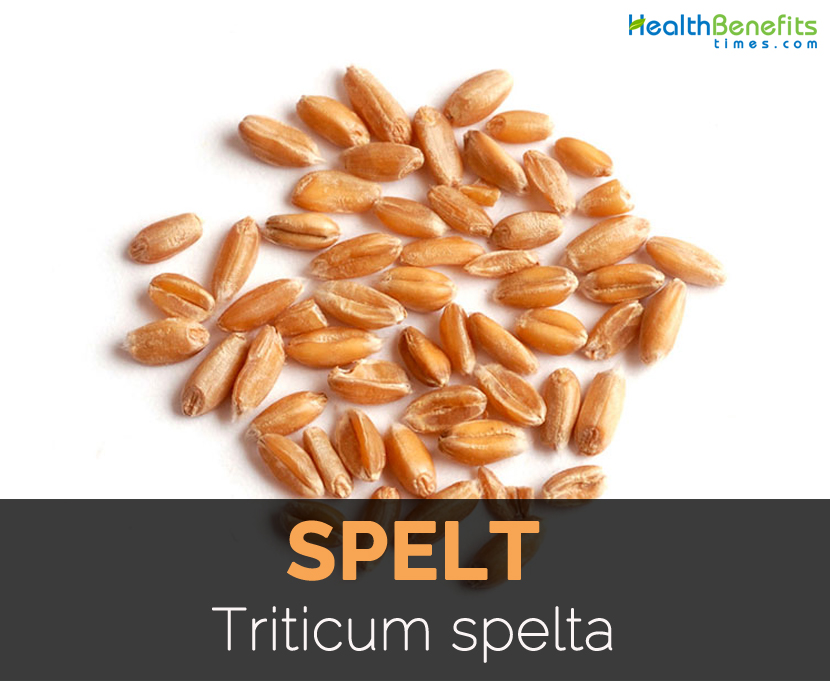 Triticum spelta is an annual grass in grass family Poaceae and is inherent to Mediterranean region and Southwest Asia. Spelt is one of the various species and numerous varieties of cultivated wheat and was an important grain in Europe from Bronze Age till medieval period. Through 1800s and early 1900s and cultivated in Mediterranean. In late 1800s spelt was brought to U.S. and production was increased in during early 1900s. Spelt has slender and loose spikes measuring 12.5 to 20.5 cm long. Each spikelet possesses two grains which is enclosed in glumes or husks after threshing. It is very hardy and is able to tolerate nutrient poor soils.

It is an ancient member of wheat family and an evolutionary hybrid of goat grass and emmer wheat. It has the similar appearance of wheat but the outer shell is hard before milling process. Spelt has nutty and slight sweet flavor. It is used in bread and cookies recipes but contains gluten. It is purer genetically and is tolerated by the patients having wheat sensitivities but is not free from gluten. Spelt are used in soups, stuffings, pilafs, salads and risottos. It is also used for baking purposes and for making bread. Spelt have high content of dietary fiber, copper, thiamin, dietary fiber, niacin, manganese, Vitamin B3, B2 and phosphorus. Spelt have high content of protein, carbohydrates, Vitamin B and E and low amount of amino acid called lysine. It has nutty flavor with low gluten in comparison to common wheat. Similarly it is used like common wheat in bread goods, bread and breakfast cereals.

The flour prepared from Spelt promotes blood circulation, immune system, builds up muscles, supports digestion and healthy bones. It is recommended to use spelt flour instead of wheat flour for those who suffers from blood pressure problems, brittle or weak bones, stress, diabetes and hypertension.

Spelt is a hybrid of domesticated tetraploid wheat such as emmer wheat and wild goat grass Aegilops tauschii. In the Near East, this hybridization took place and before the appearance of bread wheat in archaeological record 8000 years ago. The evidence has shown that spelt wheat is the result of hybrdisation of bread wheat and emmer wheat. Spelt have two different origins in Europe and Asia, single origin in Near East which is unresolved.

Evidence shows that spelt has been cultivated by ancient civilizations in Middle East and Europe thousands of years ago. It is mentioned in various Roman texts and Old Testament. In many Stone Age excavations, carbonated grains have been found throughout Europe. Till the end of 19th century, it was widely popular in Eastern Europe. German record which dated 1850 showed that about 94 percent of cereal acreage produced spelt and 5 percent produced bread wheat. Rapid developments in modern farming lead to rapid fall from favour of spelt. In mid-1980, it was rediscovered in Europe and since it has undergone a dominant resurgence in various parts of world. For this, the introduction of special machinery is a must which could de-hull individual spelt grains in marketing quantities which should be introduced into chain of production to make flour. This stage made it realized that taking lead in this renaissance that cost and time was far exceed advantages to both consumers and farmers of reviving this ancient grain.

Spelt is water soluble and could be digested easily than wheat flour. It is acceptable for people with wheat sensitivities and is a substitute for some people who are intolerance to gluten though it is not gluten free. It is suitable for those who have celiac disease or is allergies to true wheat. If one is not sensitive to wheat then also it could be added to the diet. Flour of Spelt has high content of protein and low calories in comparison to wheat flour. It has ample nutrients and is a great source of manganese, Vitamin B2, copper, niacin, protein, phosphorus and fiber. The outer husk is tougher than wheat.

Thiamine has various roles in the body. Vitamin B is required to convert carbohydrates into energy and to keep body systems in check especially when it involves in nerves, muscles and brain. It has limited role in immunity and helps to lower anxiety, stress which weakens the body’s defense against disease. Spelt contains these vitamin B which helps to prevent diseases. Spelt solo won’t safeguard from various viruses and bacteria which is responsible for sickness. Yet it contributes to maintain healthy for long term.

Spelt is an excellent source of iron which is a component of hemoglobin. Hemoglobin is found in red blood cells which help to carry oxygen rich blood from lungs to various body parts. The deficiency of iron makes one difficult for red blood cells to carry out oxygen to body parts. Foods rich in iron are red meat, beans, raisins, spinach and red food. As some foods are fortified with iron, spelt contains it naturally.

Spelt has various minerals which are essential to maintain bone health. It has zinc, selenium, phosphorus, magnesium and copper. These minerals are helpful to create and strengthen bone tissues. Increase an intake of minerals to maintain healthy bones which prevents the chances of osteoporosis and age related conditions which have negative impact on bone health.

Niacin helps to keep the body’s systems running. It has limited role in regulating hormones. To a precise, niacin interacts with adrenal glands which produce sex hormones. The foods rich in Vitamin B3 such as spelt are essential to be consumed because if hormones are out of sorts then life would be difficult. Being a great source of niacin, its regular consumption keeps the hormones in check both physically and psychologically.

The deficiency of fiber may result the people to experience digestive problems. Spelt has high content of fiber which prevents the chances of constipation, gas, bloating, diarrhea and cramping. It adds bulk to stool which makes the movement easier through digestive tract. It also speeds up the rate of nutrient absorption by the body and improves the quality of life.

The serving size of provides 100 percent daily recommended value of manganese which is a vital trace mineral which is essential for vital functions such as digestive enzymes, nutrient absorption, immune system defenses and bone development. The deficiency of manganese causes muscle aches, bone loss, change in mood and joint pain. Manganese is able to lower bone loss. Combine it with other minerals such as zinc, copper and calcium which help to minimize bone loss in older women who are prone to weak bones and bone fractures. Manganese prevents osteoporosis, pain and fractures.

Spelt has high content of riboflavin which helps to lower frequency and severity of migraine headaches. Two ounces of baked product which is made from spelt provides 75% of daily recommended amount of riboflavin. Riboflavin has a vital role which helps to convert food to energy for producing antioxidants in the body and metabolise iron into bloodstream.

Those who are not tolerant to gluten such as patients with celiac disease and non-celiac gluten sensitivity should avoid it.

Coarse-grind spelt (into cracked spelt). Measure 1/4 cup cracked spelt, in the pan, cover the spelt with 1 1/2 cups water along with a dash of salt. Bring to a rapid boil for 1 minute, stirring often. Then simmer for 5 minutes. Season to taste along with cinnamon, brown sugar and/or honey or anything else that sounds appetizing.An alternative of this recipe permits the chef to take the same components the night before eating – bring them to the boil for 3-4 minutes. Cover and let sit over night. The next morning, warm the cereal within the microwave or on the stove until warm and season to taste.

This recipe was shared by Rose E. of Arizona

Combine equal quantities of Spelt, Millet, Oats, Rice, Barley and Wheat (all whole grains) in a sealed container. For just one serving, take 1 ½ Tablespoons of the mixture, add roughly ¼ cup water, and put in a slow cooker (crock pot). I have my cooker on a timer that turns on at 3 am and shuts off at 6 am. Cereal is fully cooked and could be eaten any time. It may be heated up in the microwave oven if preferred. You may also add any fruit or sweetener you would like.

This recipe was shared by Carole Thompson of Idaho

Combine flour and sea salt collectively. Put yeast in very warm water to dissolve, then add honey and oil. Combine all components jointly. Knead lightly. Let rise until double, roll out and spread melted butter onto it. Sprinkle sugar over butter. I use fructose sugar, however, you may use brown sugar or granulated sugar. Dust cinnamon over sugar. Roll up and cut in about one inch increments. Place cut rolls in baking dish. Bake at 350 degrees for 15 minutes or until golden brown. Enjoy!