Trending
You are at:Home»Herbs and Spices»Health benefits of Spider Plant 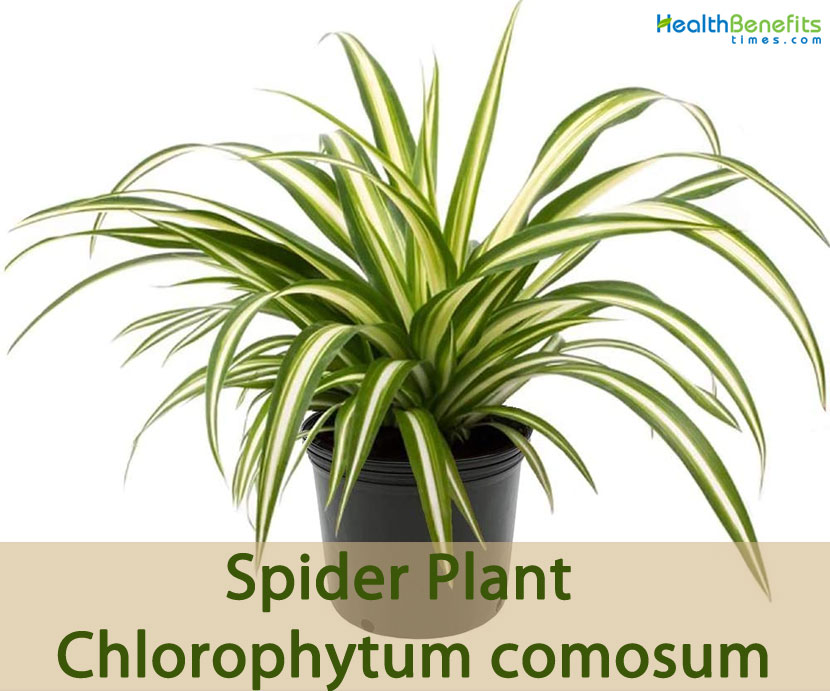 Spider plant scientifically known as Chlorophytum comosum is an introduced herbaceous plant belonging to Asparagaceae family. The plant is native to tropical and southern Africa. The Plant has been reported as introduced in Australia and the southern United States (Alabama, Florida, and Georgia). In Alabama it has been collected as an escape in Conecuh County. Some of the popular common names of the plant are Airplane Plant, Hen-And-Chickens, Ribbon plant, Spider-Ivy, Spider plant, Walking Anthericum, bracket plant, St. Bernard’s lily and tufted bracket plant. The Victorians called it ribbon plant, because of its variegated selections. The variegated sort called Vittatum, with a wide central band of white down the center of the leaf, is most common. Variety called Variegatum has a white band down the outer margin of the leaf. Gold variegated forms are also available.

Genus name Chlorophytum relates to the leaves of the plants and comes from the Greek words chloros meaning green and phyton meaning a plant. Although this may be true for some species, the vegetative parts are green and not yellow-green in C. comosum. The specific epithet comosum also refers to the leaves. Coma is derived from the Greek word kome, a tuft of hairs, and relates to the leaves arranged in a rosette. Variegatum has margins of white or cream. Vittatum has recurved leaves with a central white stripe and green margins. Spider Plant is a common houseplant often grown in hanging baskets. In warmer areas of the state it is sometimes planted as a groundcover in shady areas or as filler in flower beds. Several cultivars with variegated foliage are available.

Spider Plant is a grass-like evergreen, clump-forming, perennial, herbaceous plant that normally grows about 25-35 cm in height and 60-90 cm in width. The plant is found growing undergrowth of forested river valleys, mountainous regions and thickets, on steep embankments, flat terrain and cliffs. It was found growing in a disturbed urban woodlot on the slopes of a small stream. It grows on a variety of soils (volcanic or sedimentary) derived from sandstone, shale, dolorite or granite. The soils are usually slightly acidic.

Spider Plant has a dense root system consisting of thickened elongated white fleshy tubers and fine roots. The tubers have a conical shape at ends, their length being between 5 and 10 cm (2-4 in) and their diameter between 0.5 and 1 cm (0.2-0.4 in).

They are the characteristic shoots that grow sideways. From each nobe of the stolon, the spiderettes form leaves and roots. With spiderettes the plant spreads vegetatively and it is a way without difficulty to propagate the Spider Plant.

Vegetative stems are short and stout with very short internodes, while flower stalks are stiff, wiry, and lightly scabrous; viviparous plantlets form on the terminus of these stalks and produce fleshy aerial rootlets. Tiny green buds are largely encased in the rosette at the base of the plant, or elongate shortly after formation on the wiry arching flower stalks. Bark are not applicable.

Leaves rise directly from the rhizome to form a rosette. They are simple, without petiole, linear-lanceolate, of alternate arrangement and have a deep green color. The lamina is flat, with parallel ribs, entire or slightly undulate margined, leading to a pointed tip. The dimensions of the leaves vary in length between 20 and 45 cm (7.8-17.7 in) and in the width between 0.6 and 2.5 cm (0.23-0.98 in). Leaves of most cultivars are streaked with white to creamy yellow variegation, while the species type is green alone.

Individual flowers are star-like shape, greenish-white, borne on stalks (pedicels) some 4–8 mm (0.2–0.3 in) long. Each flower has six triply veined tepals which are 6–9 mm (0.2–0.4 in) long and slightly hooded or boat-shaped at their tips. Stamens consist of a pollen-producing anther about 3.5 mm (0.1 in) long with a filament of similar length or slightly longer. The central style is short and smooth about 3–8 mm (0.1–0.3 in) long with a tiny and capitate stigma.

Fertile flowers are followed by tiny triangular deeply lobed three-celled leathery capsule, 3–8 mm (0.1–0.3 in) long, on stalks (pedicels) which lengthen to up to 12 mm (0.5 in). Each cell bears 3-5 smooth and flat black seed 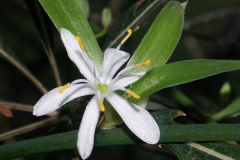 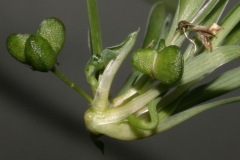 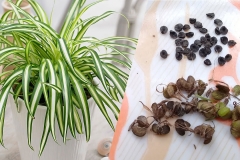 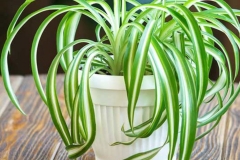 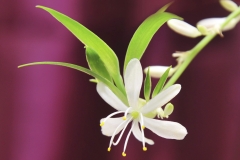 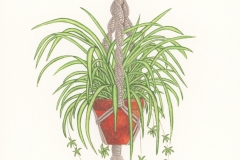 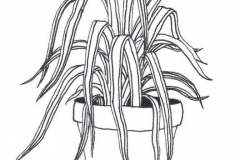 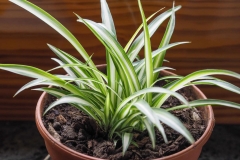 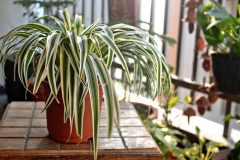 The roots of the Spider plants have wonderful medicinal value. In Chinese tradition, the roots of spider plants are used for the treatment of bronchitis, burn, and bone fracture. Listed below are few of the health benefits of using spider plant

Root extracts of spider plants are used to study the hepato-protective activity in rats. The extracts of the spider plant root help in reducing the inflammatory process of the liver thus help in healing.

Roots of spider plants have been researched against 4 different human cell lines mainly HeLa, HL-60, and U937 for different types of tumors. The root extracts, thus, helps in suppressing the tumor activity by apoptosis or death of the cell. Although further detailed experiments are yet to be done.

Spider plant absorbs water through its root and circulates through its stems and leaves. When water reaches the leaves; it will evaporate & increase the humidity. The increased humidity decreases the airborne disease like cold, cough, sore throat and flu. Whole plant extract of Spider plants helps in reducing the cough and thus relaxing the chest congestion. In Chinese tradition, the extract of the spider plant is used against bronchitis and cough-related problems.

Other Interesting benefits of Spider plant

There are some houseplants that can pretty much grow themselves; the spider plant is one of them. It can thrive well and easily adapt to various climatic conditions even when neglected for days, overwatered or under-watered. Spider plant grows well in both low light and part sunlight but it is suggested to keep this plant in a spot with bright indirect sunlight.

Spider plant is considered among the easiest air-purifying plants to grow. It is effective in removing harmful chemicals from the air, such as carbon monoxide, xylene, formaldehyde and toluene. According to NASA reports, the spider plant is among the top 3 types of houseplants that are great at removing formaldehyde, which is a common household chemical and generally found in manufactured wood products, plastic products, pesticides, leather goods, adhesives, clothing and drapes, etc.

According to the American Society for the Prevention of Cruelty of Animals (ASPCA), the spider plant is listed as non-toxic for pets. But it is still recommended to keep pets away from this plant and do not let them eat the leaves as that may pose a potential risk. The spider plant consists of chemical compounds that are said to be related to opium, which may give the pet an upset stomach, vomiting or diarrhea.

According to multiple scientific researches, adding the spider plant to hospital rooms speeds up the recovery rate of surgical patients compared to patients in rooms without the plant. The patients require less pain medication, do not suffer from blood pressure or heart rate issues, experience less anxiety or depression and are released from the hospital sooner.

Spider plant is a perennial with a high transpiration rate. It absorbs water through its roots and then circulates the moisture through stems and leaves. Once the water reaches the leaves, it evaporates into the air and increases the humidity. The increased humidity decreases the risk of several airborne diseases, such as cold, cough, sore throat and flu-like symptoms. Growing spider plants at home or office helps in keeping these diseases away and helps increase the concentration and productivity.

6. Removes Toxic Substances from Your Home

This houseplant is the easiest species to grow. It effectively removes harmful and poisonous chemical substances such as xylene, carbon monoxide, toluene, and formaldehyde from the atmosphere.

Tips for repotting your Spider Plant

Some additional points to Remember