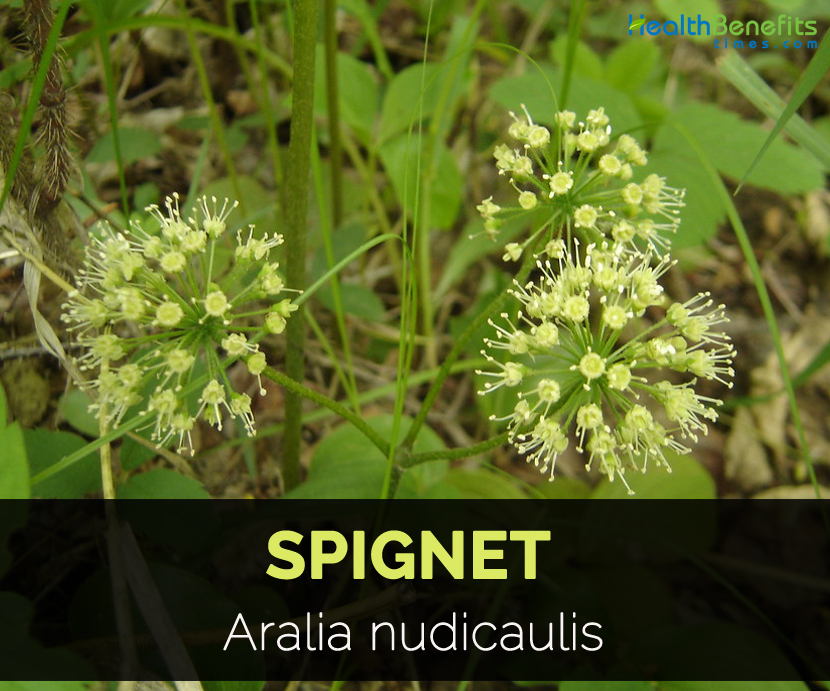 Spignet is also known from other common names such as Bamboo Brier, Wild Sarsaparilla, Rabbit Root, Shot Bush, Virginia Sarsaparilla, False Sarsaparilla, Small Spikenar, American Sarsaparilla and Wild Licorice. There are several species of Spignet, which are indigenous to Central America, southern Mexico, northern South America, and such West Indian islands as Jamaica. The common name Sarsaparilla is derived from the Spanish zara (shrub) and parrilla (little vine), known in the south as bamboo brier. The botanical name Aralia nudicaulis is derived from Latin and Greek: nudus, Latin for naked or bare and kaulos, Greek for stem. Aralia racemosa, American Sarsaparilla, is a member of the Ginseng family.

The Sarsaparilla of commercial use consists of very long roots having a thick bark of a greyish or brownish colour, with many slender rootlets, deeply furrowed longitudinally. When cut, sections show a brown, hard bark with a porous centre portion. The roots that have a deep orange tint are the best and the stronger the acrid and nauseous qualities the better are the properties of the root. Height 1–2 ft., bearing several bunches of yellowish-green flowers, followed by clusters of small berries resembling, to some extent, the common Elderberry. 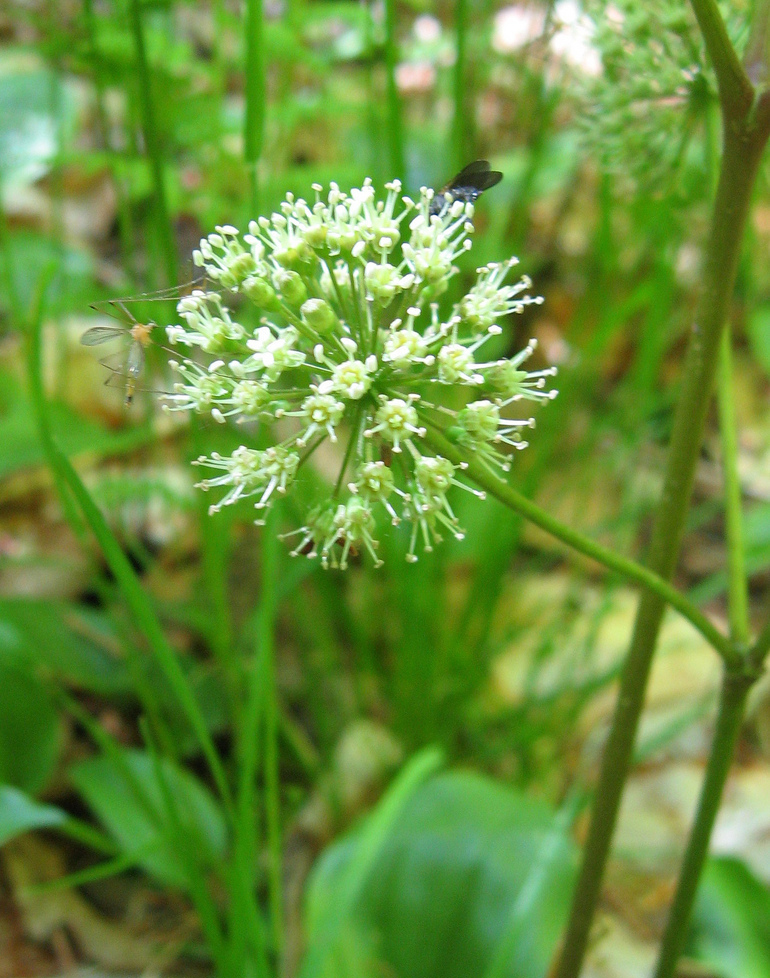 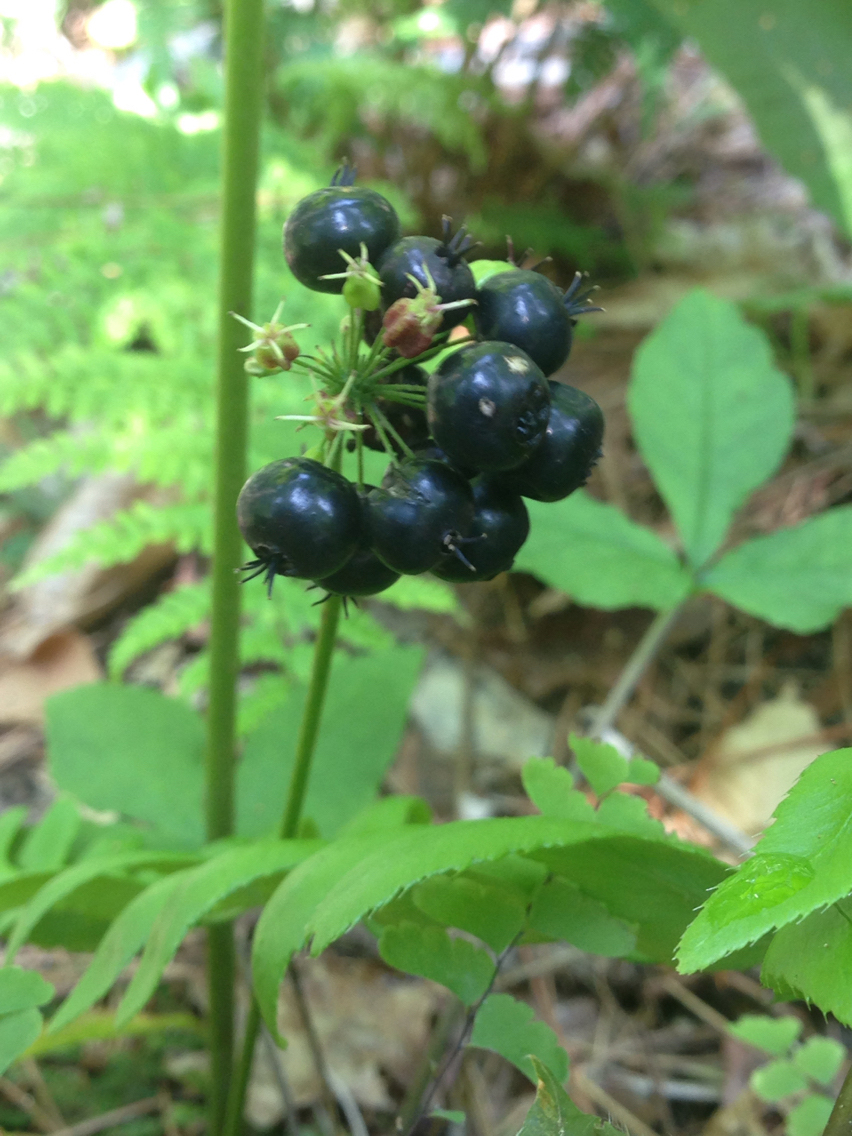 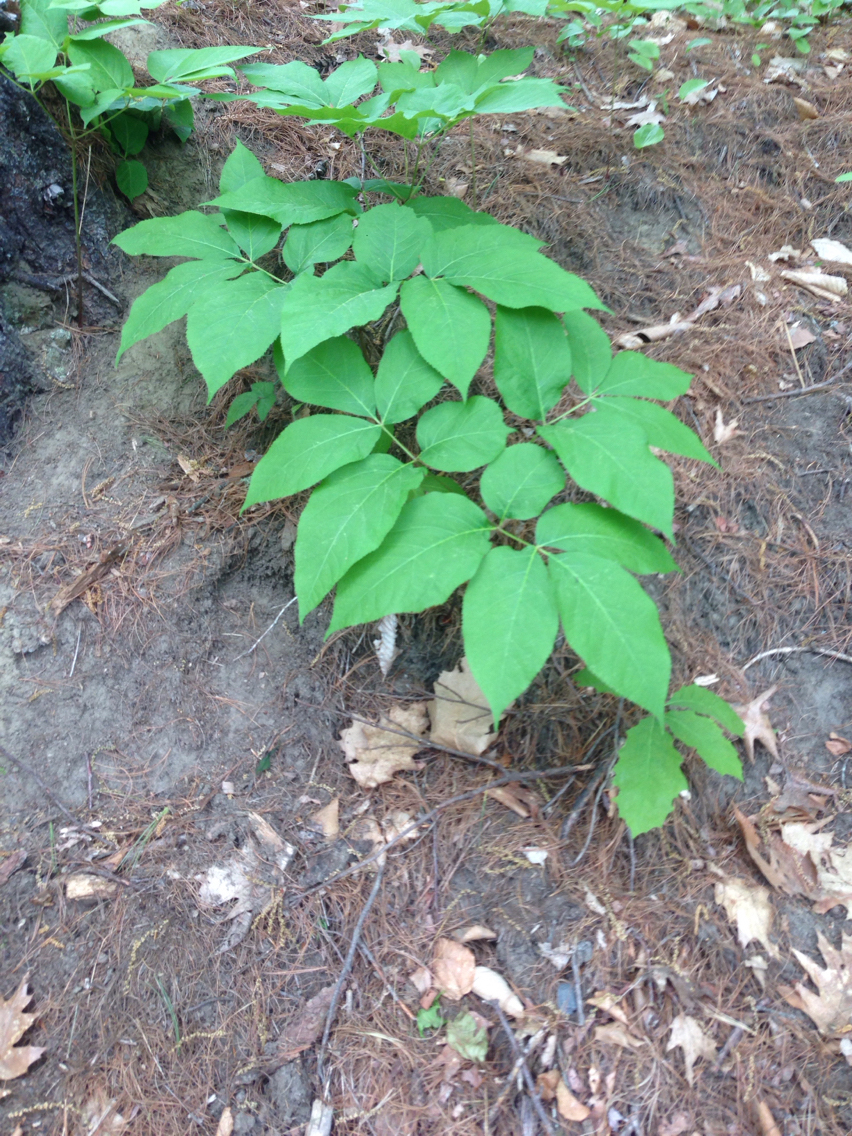 [Show thumbnails]
Chemically we know the root contains salseparin, a colouring matter, starch, chloride of potassium and essential oil, basserin, albumen, pectic and acetic, and the several salts of lime, potash, magnesium and oxide of iron. The taste is mucilaginous with scarcely any odour.

Stem is a single, short and swollen stem which gives rise to long leaf stalk about 12 to 14 inches tall. Stalk branches at the top into three parts each bearing 5 leaflets 2-4 inches long. Shorter stalk also arises from the stem and branches into three clusters of greenish white flowers in May to June. Flowers mature month into blue berries which closely resemble fruits of low bush blueberries ripening at about the same time. Stalk branches at the top into three parts. Leaflets are 2-4 inches long.

Native people used the root of Spignet for centuries for treating joint problems such as arthritis and healing skin problems such as eczema, psoriasis and dermatitis. Root is used to cure leprosy due to blood purifying properties. Later on it was introduced into European medicine and registered as an herb in United States Pharmacopoeia for treating syphilis.

Flowers are white in rounded clusters of greenish to white on top of leafless stem. Clusters are rounded and 3 to 5 cm wide. Flowers have tiny petals. The plant flowers on late May or June. After blooming, purplish-black berries appear and grow in clusters.

Leaves are single, long stalked and about 20 to 40 cm tall and rise above the flowers. It has 3 branching parts with 3 to 5 ovate leaflets. Younger leaves are red brown to red green color that turns to green during summer. The leaves turn its color to yellow or deep red as the temperature drops in autumn.

Antioxidants found in root and Spignet extract is useful for treating cancer. Though the research has not been convincing, early results shows positive associations between flavonoid and sterol contents of plant and lowers the spread of cancerous cells according to the study published in Anticancer research.

People with inflammatory problems such as arthritis, gout and aching muscles and joints, the active ingredients found in Spignet helps to alleviate those pains. It has various compounds such as parillin, saponins and other flavonoids which soothe those flareups within body and alleviate pain as well as discomfort.

Spignet increases libido of men and women for increasing fertility. This root extract has organic compounds that promotes flow of blood and boost sperm motility by increasing the chances of conception and improves overall sex drive.

Spignet suppresses appetite which means those trying to lose weight might get help with the addition of this supplement as it curbs cravings and prevents cheating on diet.

Spignet is used as a diuretic as it stimulates urination when consumed. People who want to detoxify their body can use it as it eliminates excess fats, toxins, salts and water from the body. Moreover, it helps to purify the blood by promoting overall health and lowers strain on liver and kidneys.

Spignet tincture, teas and supplements are used for treating coughs, flu and cold in several ways by preventing it from occurring in the first place by promoting immune function and eliminates bacteria. It treats the symptoms with its mucolytic effects and inhibitory effects on cough reflexes. The antioxidant and anti-inflammatory properties breaks mucus bones and makes mucus less sticky, bacteria and phlegm are passed out of the body more easily. In case of fevers, it lowers nausea and helps to regulate bowel function.

In the mid-1800s Sarsaparilla was something of a national phenomenon in the United States as a spring tonic to eliminate poisons from the blood and purify the system from all left-over infections of winter. It is dependably useful in rheumatism, gout, skin eruptions, ringworm, scrofula, internal inflammation, colds, catarrh, fever and to relieve gas from stomach and bowels.

When in need of an excellent antidote for deadly poisons, cleanse stomach with an emetic, causing vomiting, and drink copiously of the tea. As an alterative tea it is best prepared with Burdock (Lappa). One of the best herbs to use for infants infected with venereal diseases. They can be cleansed without the use of mercurials. Also wash the pustules of sores with a tea made of the root and administer inwardly by mixing the powdered root with food.

1 oz. of the root boiled in 1 pint of water, taken in wineglassful amounts three times a day. For colds, etc., it should be used as a syrup, 1 teaspoonful to 1 tablespoonful four times a day, depending on age and condition. Of the tincture, 20–40 drops four times a day.

As a strong tea for skin infections.

In the Russian Far East a shrub known as Aralia manchurian is used as a general tonic of Nastoika (with vodka) for physical and mental exhaustion.

As an appetizer and for dyspepsia, fever, skin diseases, syphilis, leucorrhoea, diseases of the genito-urinary tract, chronic cough, etc.

Powdered roots, 10–60 grains with milk. Also used as syrup and decoctions from the root.