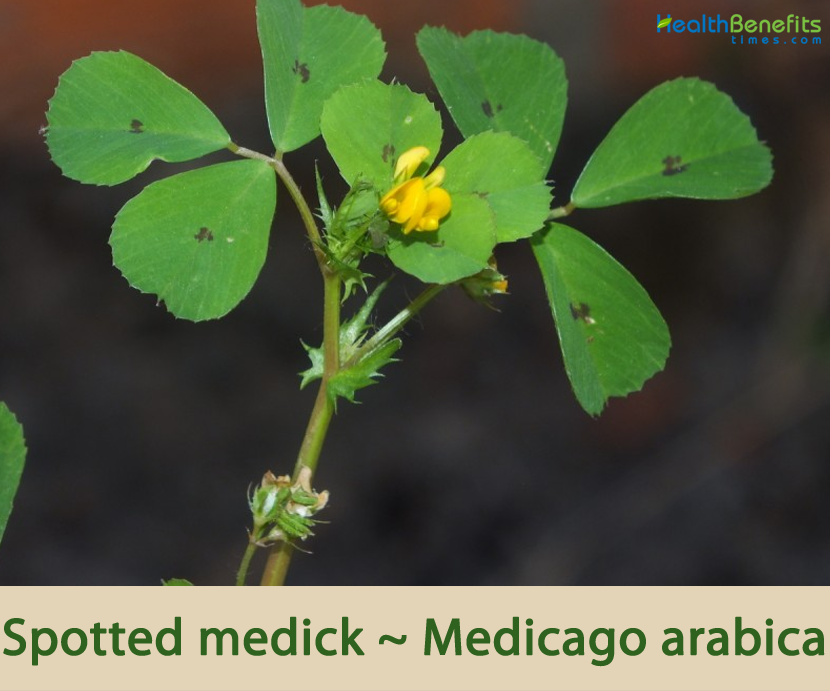 Medicago arabica, commonly known as spotted medick or burclover is a flowering plant in the pea and bean family Fabaceae / Leguminosae. The plant is native to Mediterranean region and introduced in North and South America and Australia. It is found throughout the world, usually on cliff top grasslands and grassy places. The plant is easy to identify because of the dark red blotch on each leaflet. The spot is anthocyanin, the same flavonoid that gives foods such as blueberries their color. But M. arabica is not edible. The plant forms a symbiotic relationship with the bacterium Sinorhizobium medicae, which is capable of nitrogen fixation.

Spotted medick is a native, prostrate or sprawling herb that normally grows about 2–6 cm tall. An annual, it is often found low to the ground mixed in with the grass. The plant is found growing in moist stream banks, grasslands, places, thin pasture, lawns, meadows and fields and disturbed areas including waste lots and roadsides. The plant grows in light, sandy and gravelly soils, particularly near the coast. Stems are decumbent or spreading, longitudinally ridged, sparsely hairy, hairs are simple and multi­cellular-glandular. The plant has one leaf per node along a hairy stem that is often red-streaked.

Leaves alternating along the stems are pinnately compound, with 3 leaflets each 0.4-4 cm long and 5–45 mm wide. Margins are toothed towards the tips. Upper surface is hairless, usually with a dark patch near the middle, lower surface is sparsely appressed-hairy, tips squared off or notched with a terminal tooth, stipules strongly toothed and hairy on lower surface. 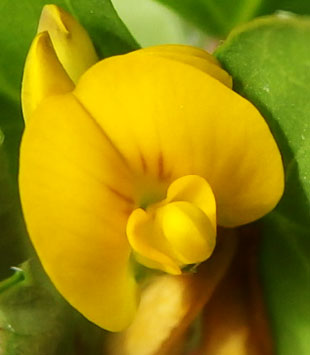 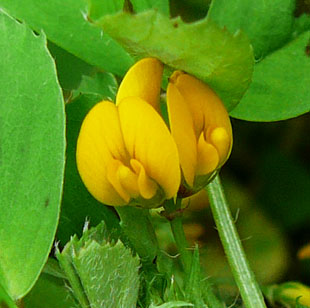 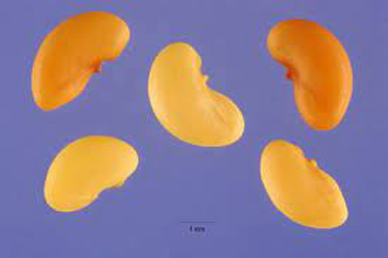 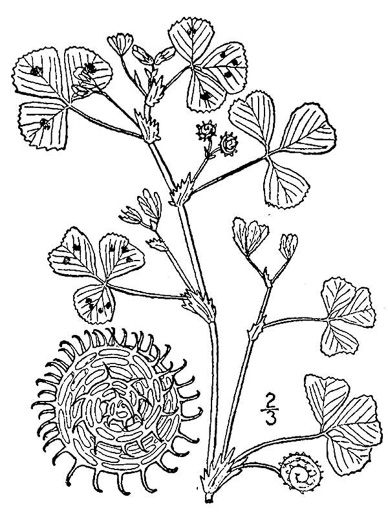 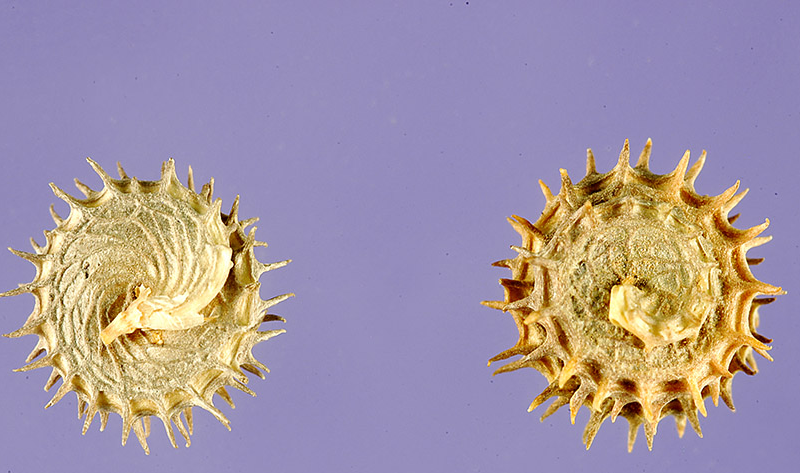 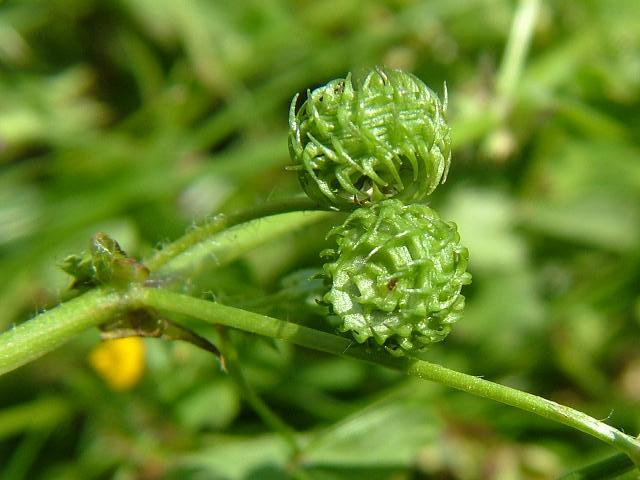 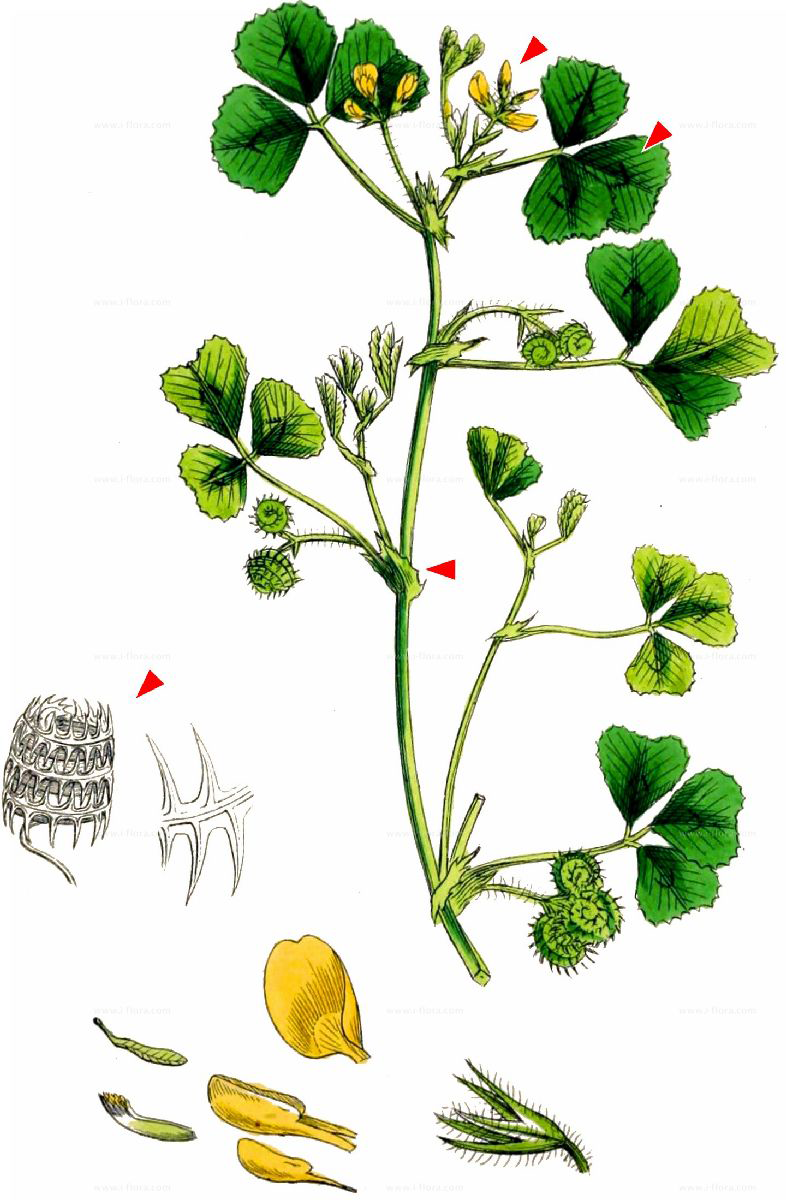 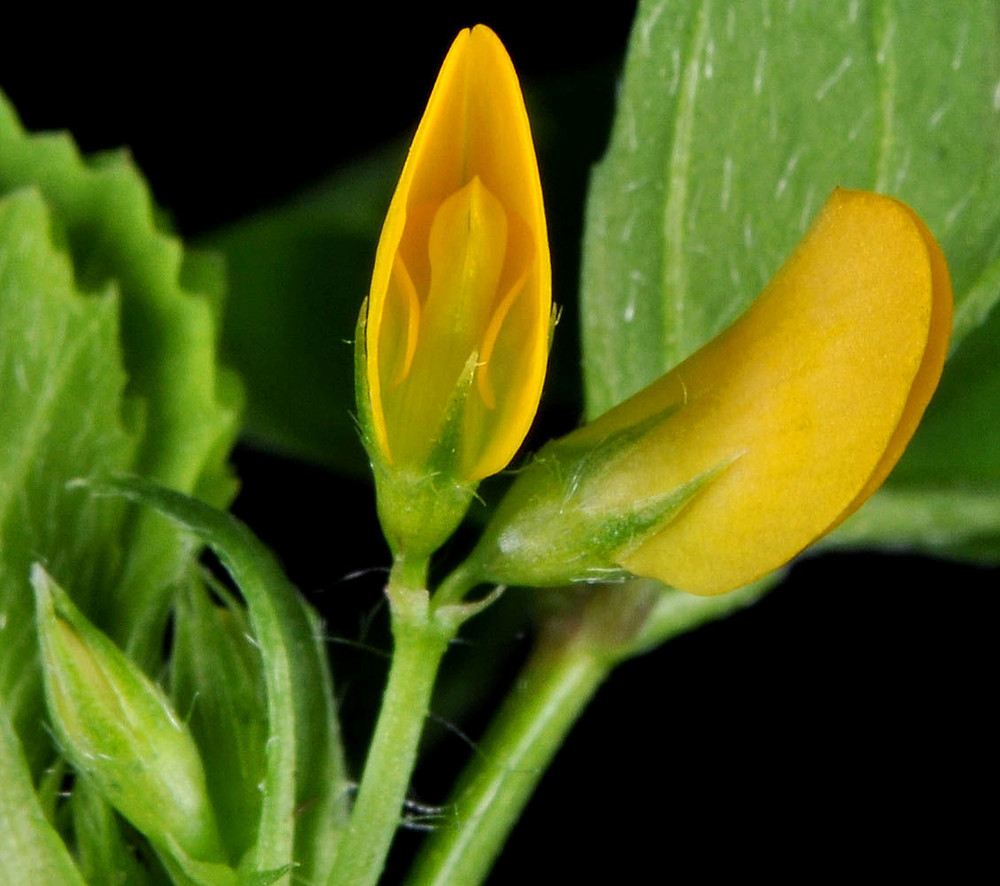 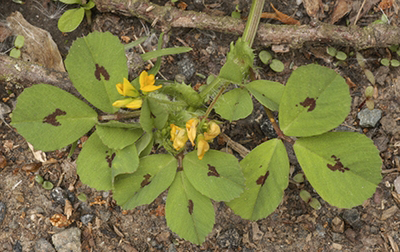 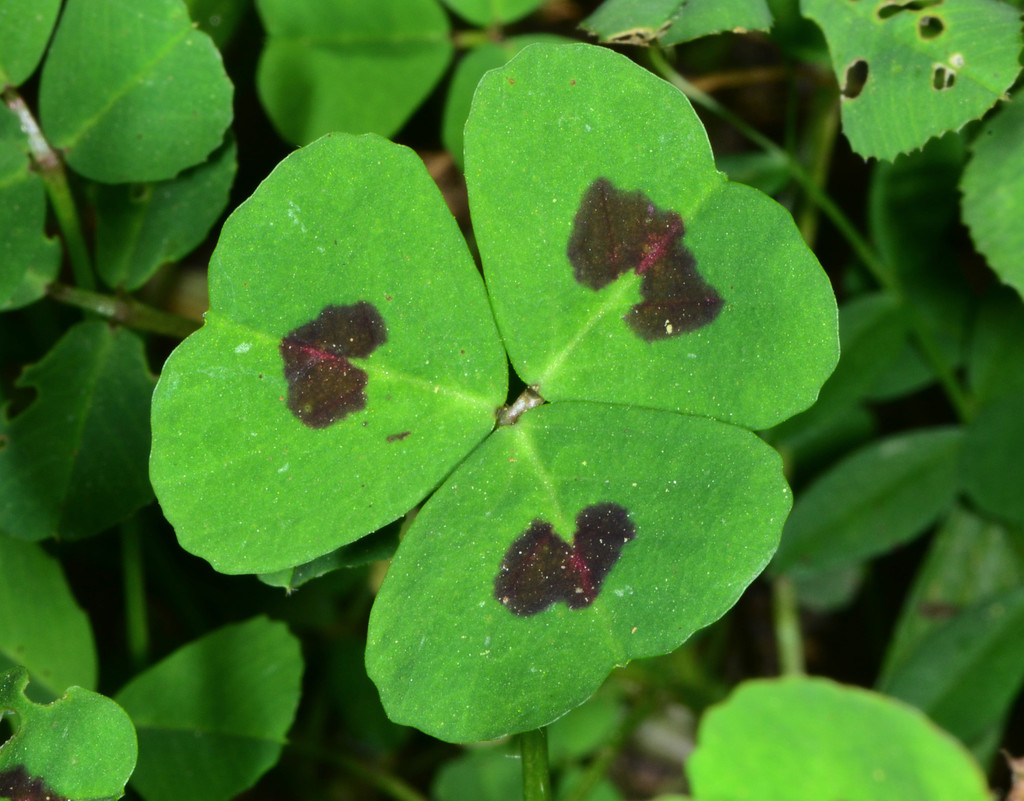 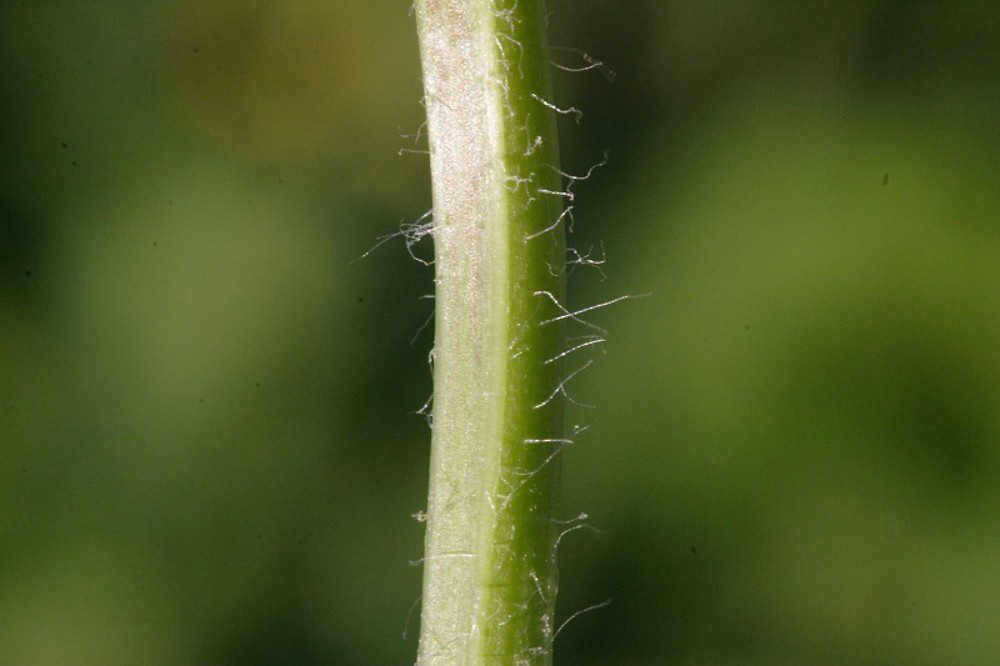 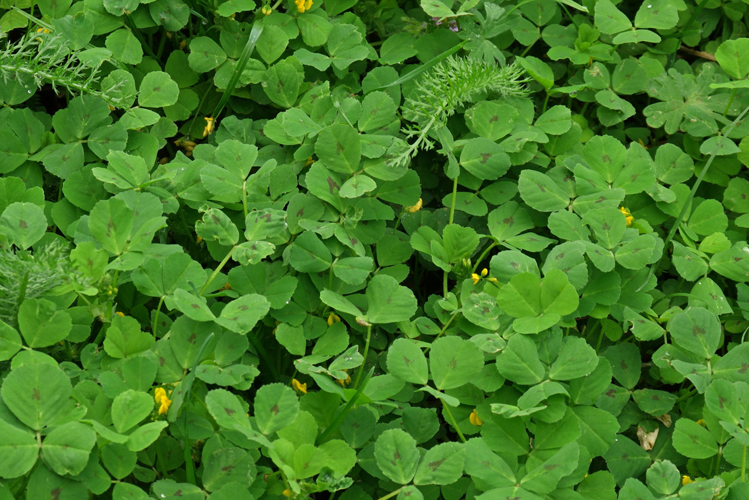 Inflorescence of 1 to 5 pea-like flowers is in a reduced, axillary raceme on a stalk 1-3 cm long on fairly short peduncles arising from the leaf axils. The stalks are shorter than the leaves. Corollas are pea-like, yellow, about 5 mm long, the banner erect, much longer than the wings and keel. Calyces are sparsely white-hairy, 2-3 mm long, the lanceolate, long-pointed teeth slightly longer than the tube. Flowering normally takes place in between April and August.

Fertile flowers are followed by pod spirally coiled through 3 to 5 spirals, round, 4-8 mm in diameter, the outer margins narrowly keeled, spineless, or with two rows of divergent prickles up to 2.5-3.5 mm long, somewhat curved to nearly straight with short hook at tip, aging pale brown. Seeds are kidney-shaped, 3 mm long and 1.5–1.8 mm wide, glossy reddish brown, with stalked hilum close to midpoint and adjacent micropyle just outside the hilum.