Trending
You are at:Home»Herbs and Spices»Facts and benefits of Squill 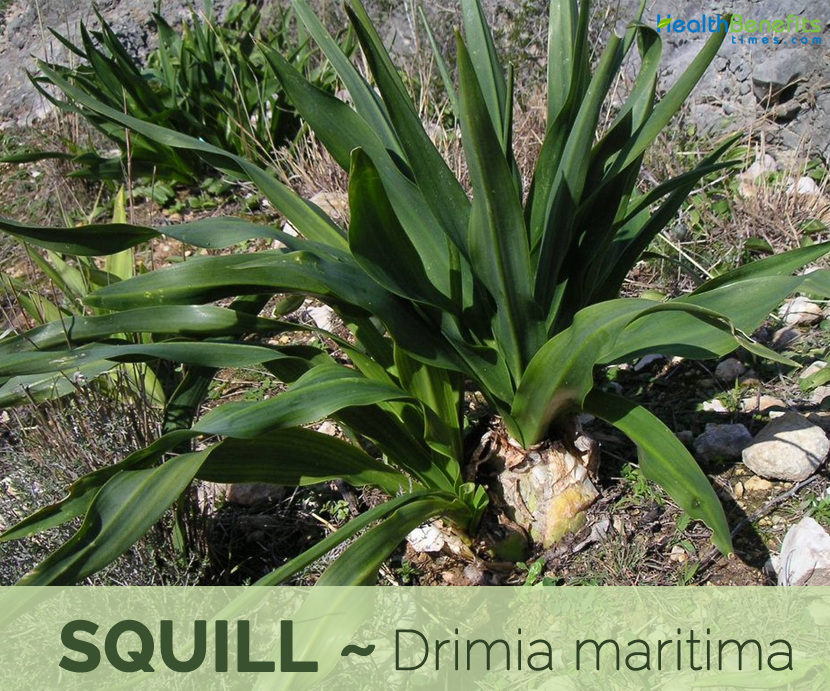 Squill is a bulb-forming herbaceous perennial plant in the hyacinth family that grows along the open spaces in sandy or gravely soil and on limestone cliffs, often under very harsh conditions. It can grow in open and also in very shady areas. It prefers dry sandy places, especially near the seacoast.   Scilla plants have a large bulb root, 15cm across, looking similar to an onion. The plant grows from a quite large, tunicated, nearly globular bulb, which can be up to 20 cm (7.9 in) wide and over five pounds in weight, the outer scales of which are thin and papery, red or orange-brown in color. Several bulbs may grow in a cluster and are usually just beneath the surface of the soil. The bulb, which is usually only half immersed in the sand, sends out several long, lanceolate, pointed, somewhat undulated, shining, dark-green leaves, measuring about (30–100 cm long) and 10 cm wide.

It has the usual structure of a bulb, being formed of smooth juicy scales, closely wrapped over one another. It has little odor, but its inner scales have a mucilaginous, bitter, acrid taste, owing to the presence of bitter glucosides. Due to the mucilaginous nature of the tissue, drying is tedious and difficult. When fresh, the bulb abounds in a viscid, very acrid juice, which is capable of causing inflammation of the skin. On drying, the bulb loses four-fifths of its weight, and its acridity is largely diminished, with slight loss of medicinal activity. The dried slices are narrow, flattish, curved, yellowish-white, or with a reddish hue, according to the variety of Squill from which they are obtained, from 1 to 2 inches long, more or less translucent.

From the middle of the leaves, a round, smooth, succulent flower-stem rises, about 1 to 3 feet high, terminating in a long, close spike of whitish flowers, which stand on purplish peduncles, at the base of each of which is a narrow, twisted, deciduous floral leaf or bract. The flower is about 1.5 cm (0.59 in) wide and has six tepals each with a dark stripe down the middle. The tepals are white, with the exception of those on the red-flowered form. The flowers normally blossom once in several weeks and are usually one or two feet below the top of the stalk. The flowering is unique in the sense that a bunch of flowers begin to blossom at the lower end and then works upwards to the stem. The flowers are in bloom from Sep to October and are followed by oblong three-sectioned capsule up to 1.2 cm (0.47 in) long that contains black seeds, borne on an erect stalk.

Squill is a bulb-forming herbaceous perennial plant in the hyacinth family that grows along the sandy coastline of the Mediterranean Sea. The compounds that make squill desirable for medicinal purposes are found in the inner layers of the bulb. It is found in remedies used to treat various lung diseases. Tonics are prepared for persons suffering with asthma, chronic bronchitis and those with whooping cough. Listed below are few of the health benefits of using squill

The bulb consists of cardiac glycosides (Scillaren A and proscillaridin) which help to stimulate the heart and produce positive inotropic and negative chronotropic effects in case of heart insufficiency, angina pectoris, nephrotic edema, and it is emetic and cathartic in higher doses.

The plant helps to stimulate bronchial mucous membrane in bronchial ailments. When compared to digitalis extract, it shows no cummulative action and acts rapidly.

Squill induces vomiting which is then headed by increase in flow of other secretions. Therefore used as an ingredient in cough medicines and is also used to treat asthma.

Traditional uses and benefits of Squill

When not to Use Squill