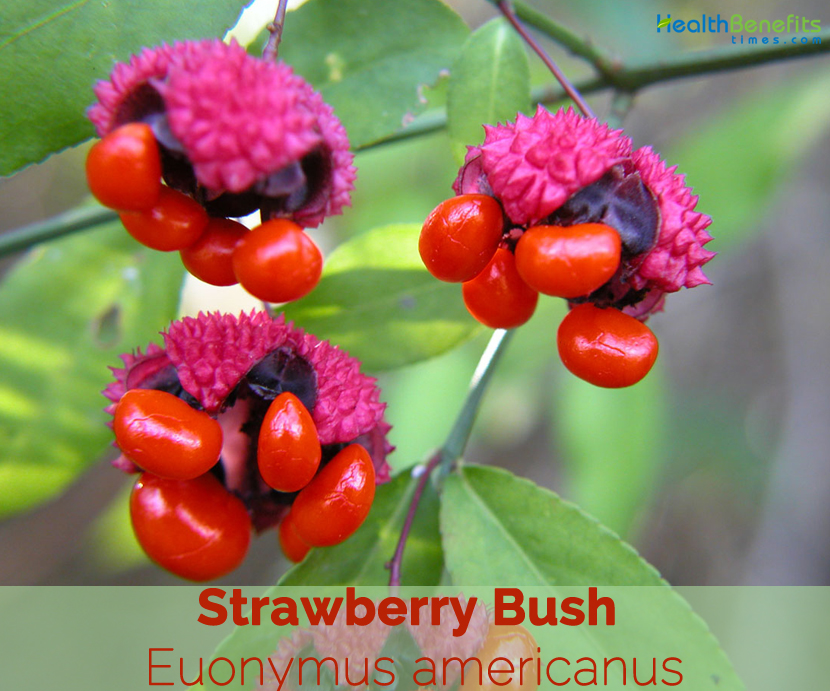 Genus name is an ancient Greek name referring to plants of this genus. Specific epithet means native to America. Some spell the specific epithet “americana” instead of “americanus” used here. This is because botanists disagree as to whether the genus name Euonymus should be treated as feminine or masculine. In classical Greek, the generic name was treated as feminine; however, Linnaeus treated the genus as masculine. The spelling “Euonymus” has formally been conserved over Linnaeus’s originally spelling “Evonymus,” which has also occasionally been used.

The leaves of the strawberry bush are opposite (two per node), spaced somewhat evenly along stem. The petioles are short, less than 3 mm and sometimes are nearly absent, the leaves then appearing sessile or sub-sessile. The leaf blades are slightly leathery to papery, oblong to elliptic, 4- 10 cm long and 2 – 3.5 cm wide, with cuneate or attenuate bases, crenulate margins, and acuminate apices. The five to seven pairs of ascending lateral leaf veins disappear before reaching the margin. Leaves turn dark orange-red in fall. The leaves are opposite and simple. It has attractive green stems in the winter.

Spring flowers bloom from the leaf axils on pedicils to 1” long. Each flower (1/3” across) has 5 pale green to greenish yellow petals with purple stamens. Most flowers in the genus have 4 petals, but this species has 5. Although the flowers are not showy, they are followed in fall by extremely showy, warty, crimson red fall fruits (to 3/4” diameter). Each fruit is a 5-lobed capsule which splits open when ripe in the fall that resemble strawberries, (hence the sometimes used common name of strawberry bush or bursting heart)

The flowers occur on the current season’s growth in small axillary clusters (cymes), each cluster usually consisting of two peduncles, each with one to three flowers (often one or two of the flowers will aborte, leaving only one functional flower per peduncle). The peduncles are slender, 1.5 to 2.2 cm long. When there is more than one flower per peduncle each flower is subtended by a short pedicel, 1 to 3.5 mm long. The flowers are bisexual, about 10 mm in diameter, with the sepals and petals readily distinguishable from one another. Calyx comprises five yellow to green sepals, 1-1.5 mm long and 1.6 – 1.8 mm wide. The corolla comprises of five greenish to reddish petals up to 4 mm long and 4 mm wide. There are five stamens, 1.5 – 2.0 mm long. The five carpels are fused. A sticky nectarous disk is present, 3 to 4 mm in diameter. The color and shape of the fruit gives it its common names.  Flowering normally takes place from March to June.

Fertile flowers are followed by a plump, red globose dry, five-lobed capsule up to 1.5 cm in diameter prior to opening. The surface of the capsule is thickly covered with minute spines or warts on the surface. This species is the only species of Euonymus L. in North America to have a capsule with a spiny or warty surface. The capsule opens along the lobes, exposing the seeds that are covered by a fleshy, scarlet aril. The seeds (sans aril) are brown, glabrous, ellipsoid, 7- 9 mm long and 4 -5.5 mm wide.

The seeds are dispersed by animals. Deer have been known to graze on this plant and seem to love the tender leaves and stems. Humans should take the red color of the seeds as a warning; they are known to be a strong laxative and cause severe diarrhea. In fact, this genus of plants in general is considered poisonous to humans. 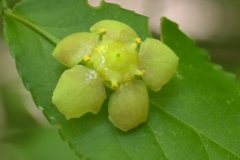 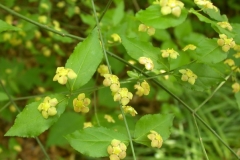 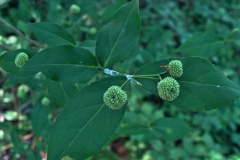 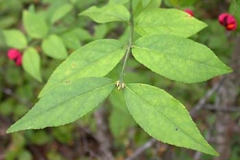 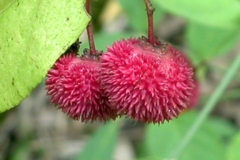 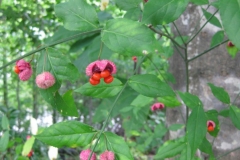 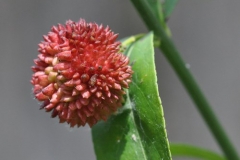 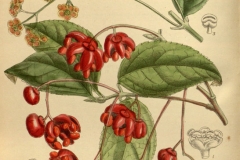 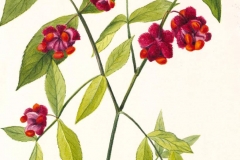 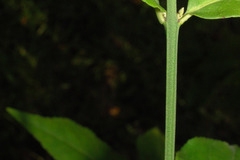 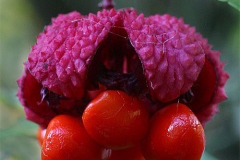 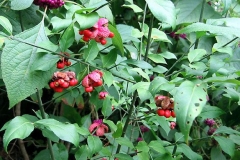