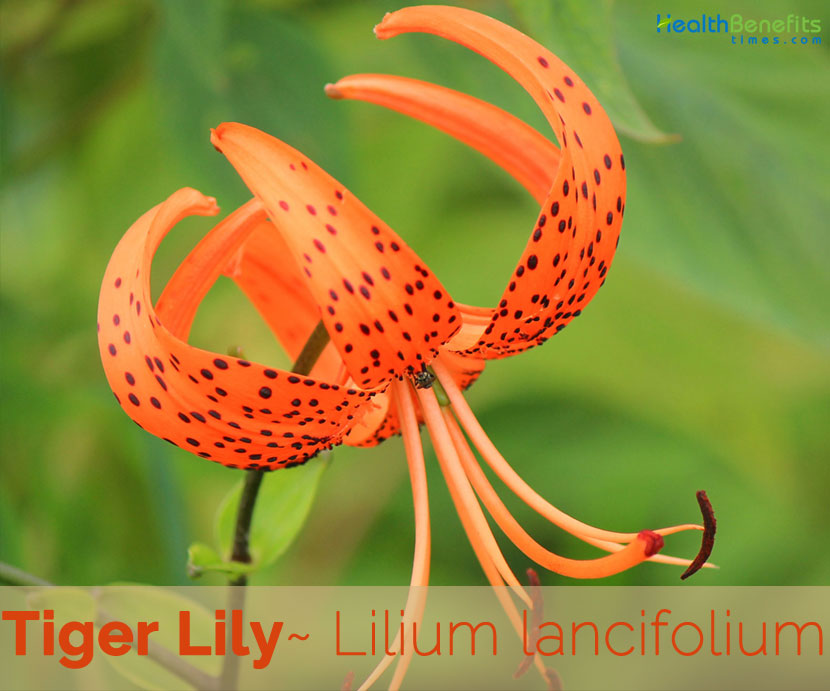 Tiger lily is regarded as an emerging or potential environmental weed in Victoria. It was first recorded as naturalized in Victoria in 1985, where it was reported to be locally abundant in the Dandenong Ranges. Tiger lily is currently mainly found in cooler highland areas and may be a potential weed of the alpine and sub-alpine regions of south-eastern Australia. The tiger lily is usually gifted to others as a symbol of friendship. It is, however, also used as a symbol of wealth, pride, and prosperity. Its deep orange color symbolizes passion and love. There are several ancient stories of the tiger lily throughout Asian culture. One of these old myths tells the story of a hermit who found a tiger with an arrow jabbed into his body. The hermit attempted to remove the arrow and save the tiger, but the tiger died. However, the tiger told the grieving hermit that their friendship would survive after its death. Tiger’s body is then converted into the tiger lily flower, becoming an everlasting symbol of their friendship.

Tiger Lily is a hardy, vigorous, bulbous herbaceous, perennial plant that normally grows about 1 to 1.5 meters tall and can reach a width of 30 to 60 centimeters. The plant is found growing in woods, thickets, river banks, grassy slopes in lowlands, hillsides and mountains, buildings, cemetery prairies, savannas, abandoned homestead sites, vacant lots in urban areas, roadsides and areas along railroads. The plant grows well in full sun, in well-drained, humus-rich loamy soil. It is widely cultivated in Asia for its edible bulbs and for medicinal uses. Stems are 0.8–1.5 m, erect, unbranched, light green, purplish green, or purple, terete, and moderately woolly-hairy to glabrous.

Bulbs are ovate to spherical, 4–8 cm across, scales broadly ovate, 2 cm long and wide and are unsegmented. Bulb is occasionally used as a vegetable, like a parsnip. It must be boiled as it can be quite toxic. Its bitterish taste is a lovely companion to stews and other thick dishes. It was grown as a root crop for many years on farms in Asia. The bulb is anti-inflammatory and used as a diuretic in some instances. They are used in Korea to treat coughs, sore throats, and heart palpitations. 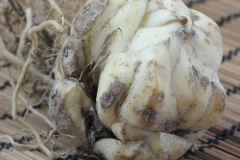 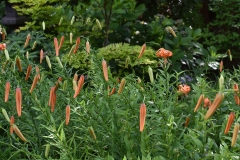 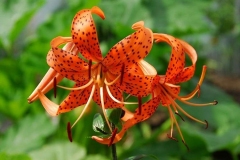 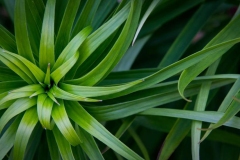 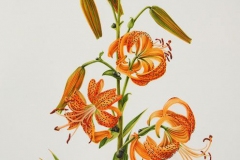 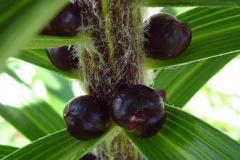 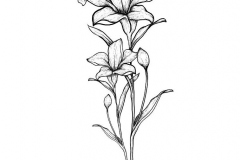 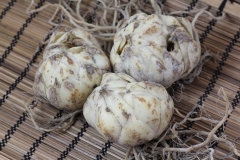 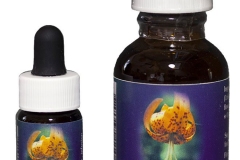 Each flower consists of 6 strongly recurved tepals that are orange to orange-red, 6 strongly exerted stamens, a strongly exerted style with a tripartite stigma, and an ovary. Tepals are narrowly lanceolate and they have dark purple or maroon spots throughout their anterior (frontal) sides. The tips of the tepals bend backward toward the base of the corolla or a little behind the corolla. The style and filaments of the stamens are whitish orange and filiform. Anthers are long, narrow, and dark-colored; their pollen is rust-colored. Blooming period occurs during mid- to late summer, lasting about 1-1½ months. Individual flowers are short-lived, but they are produced in succession. There is little or no floral scent. Because most cultivated and naturalized plants in North America are sterile triploids, usually no seed capsules are produced. Fertile flowers are followed by 3-valved, loculicidal capsule, 3–4 cm across, the margins of valves flat; seeds many, flat, in 2 rows in each cell.

Tincture is commonly made from the flower, harvested only in full bloom, and is used to treat congestion and sometimes to help with nausea. Some believe the flower can be used to treat heart disease. In ancient Asia, it was thought to help deal with issues of aggressivity. Somewhat paradoxically, the tiger lily is very toxic to cats, leading to symptoms of lethargy, vomiting, possible kidney failure, and even death. There is no known toxicity to other species.

This species is also a widespread but sporadic garden escape in eastern and north-eastern North America, and seems to be naturalized mainly along roadsides in the cooler and wetter regions of this continent. However, there is one very recent report of thousands of tiger lilies growing in large patches in natural vegetation on a mountain-top in North Carolina. It is also a weed of roadsides, waste places, cemeteries and bush margins in New Zealand.