Trending
You are at:Home»Herbs and Spices»Uses and benefits of Trout Lily – Erythronium americanum 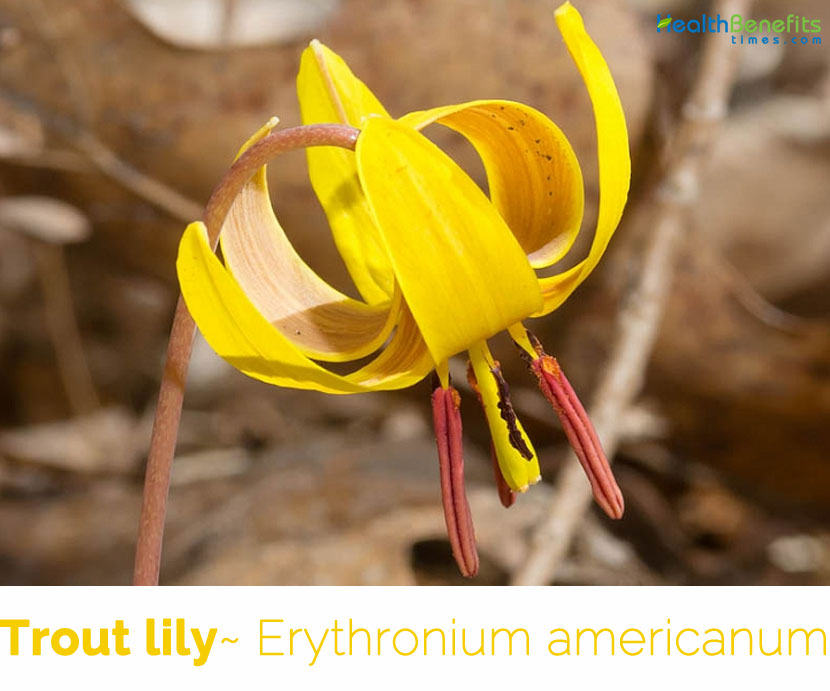 The common name “trout lily” refers to the appearance of its gray-green leaves mottled with brown or gray, which supposedly look like the coloring of brook trout. Though Trout Lilies are not violets, they are also known as the Dogtooth Violet, Dog-tooth Violet, or Yellow Dog-tooth Violet, referring to the tooth-like shape of the white underground bulb. Similarly it is also called dog-toothed lily, because its pointed, elongated bulb resembles a dog’s canine tooth. Genus name Erythronium comes from the Greek word erythronion from erythros meaning red, originally the name for another unrelated European plant. Specific epithet means of North or South America.

Trout lily is a colony forming, spring, short-lived small yellow wildflower plant that normally grows up to about 6 to 8 inches tall. The plant is found growing in meadows, rich damp open woodland, along streams, slopes of ravines, Cliffs, balds, or ledges, forests, wooded bluffs, rocky woodlands, and banks of streams and deciduous woodlands. The plant prefers slightly acid soil conditions but succeeds in chalky soils if these consist of plenty of humus. Similarly it succeeds in almost any light soil. Root system consists of a deeply buried, bulb-like corm, light brown, about 1 inch long, and solid with white starchy flesh with fibrous roots and stolons that create offshoots from the mother plant, resulting in colonies of plants. Trout lily has no stem except for when it flowers then one flower appears per stem. This perennial herbaceous spring plant grows from a deep, ovoid bulb that can send up several single-leaved sterile offshoots along with the fertile plant. The bulb has a brown outer layer and an off white center. They are about 0.5 inches in diameter and lie roughly 2-5 inches below the surface. Nectar is produced at the base of the tepals, typical of plants in the family Liliaceae.

Basal leaves are 2½-6 inches long and ½-2 inches across. They are ascending to erect, elliptic-lanceolate in shape, and smooth (entire) along their margins. Upper leaf surface is mottled pale green and brown or greenish brown, while the lower surface is solid medium green. Both surfaces are glabrous and the lower surface is often glaucous. The petioles of these leaves are relatively long, but they are located mostly or entirely underneath the ground surface. Immature shoots (Sterile) are single-leaved and they produce no flowers, while mature shoots have two leaves and they produce single-flower. Immature shoots are more common than mature shoots.

After seven years of growing, one slender, cylindrical scape grows between the leaves to produce a single flower. The scape is 4-8 inches long and curves at the end with the flower facing downward. The nodding flower is ¾-1¼ inches long, consisting of 6 yellow tepals, 6 stamens, and an ovary with 3 erect stigmata. They are sometimes tinged with purple or reddish brown on the outside of the petals. Initially, the tepals are barely separated from each other, but as the flower matures they become strongly recurved, exposing the reproductive organs. These tepals are narrowly elliptic-lanceolate in shape, and they are often tinted red or reddish brown along their outer sides. The stamens are about ½ inches long and their anthers are yellow or yellow-brown. The blooming period occurs during mid-spring and lasts about 2 weeks. The flowers are hermaphrodite (have both male and female organs). 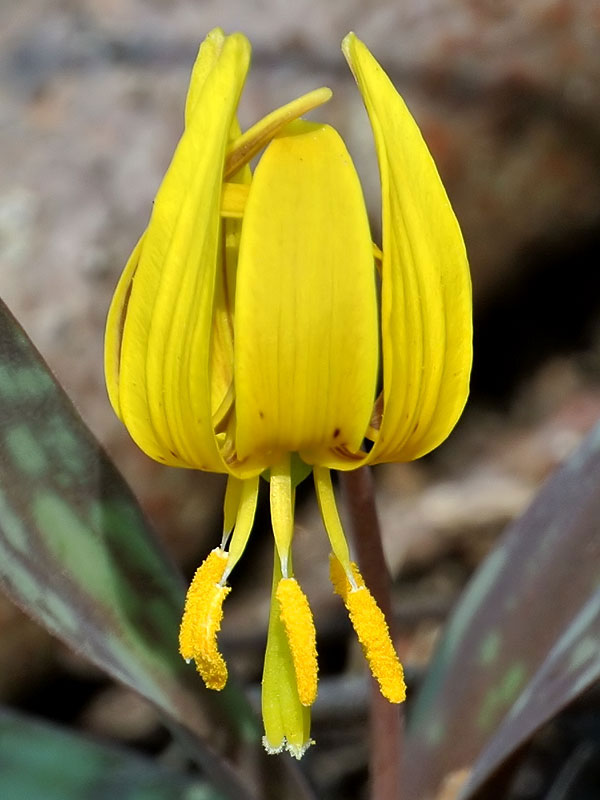 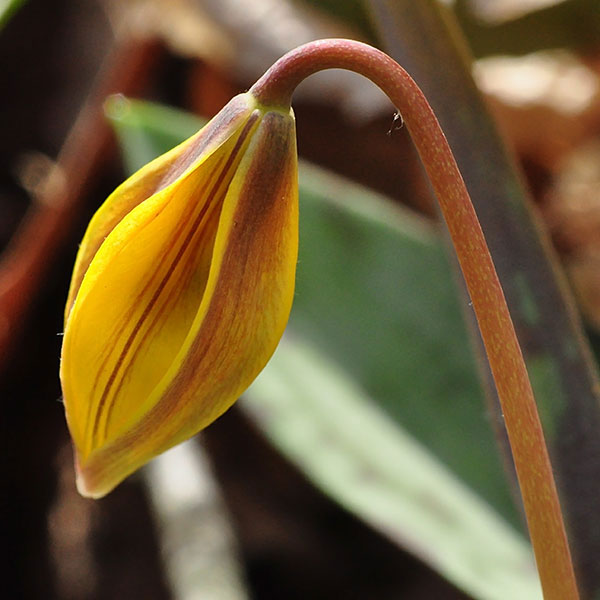 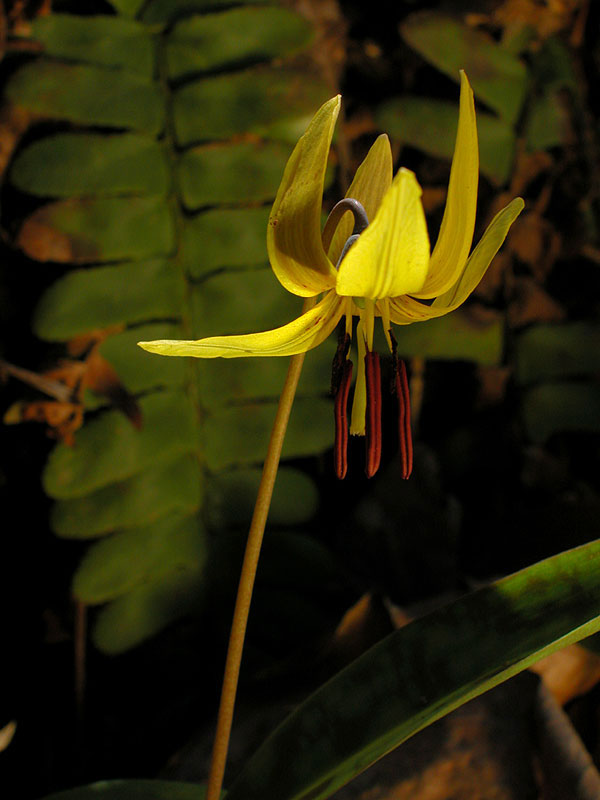 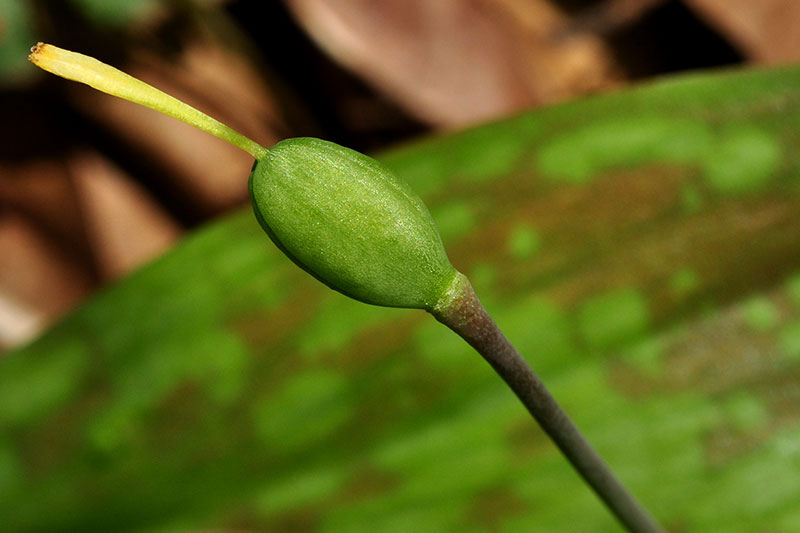 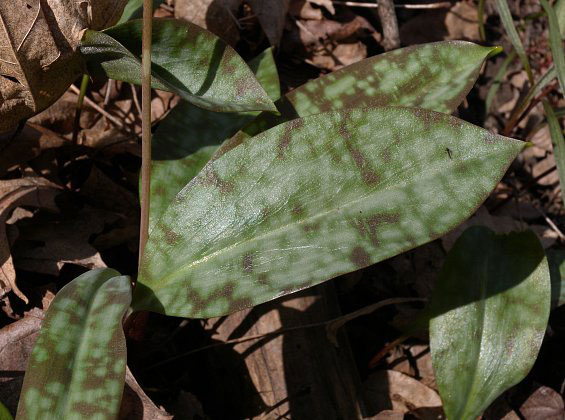 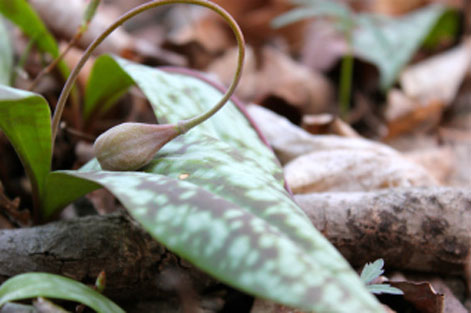 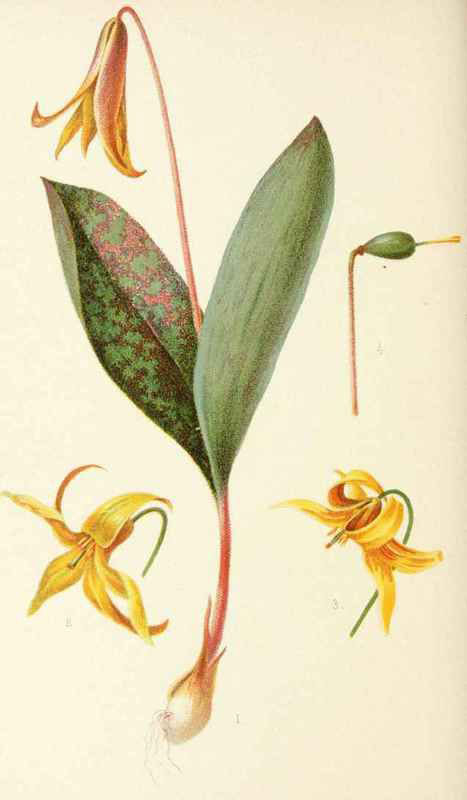 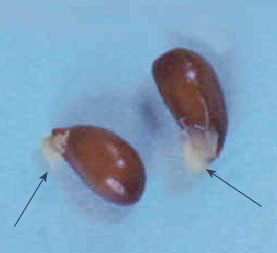 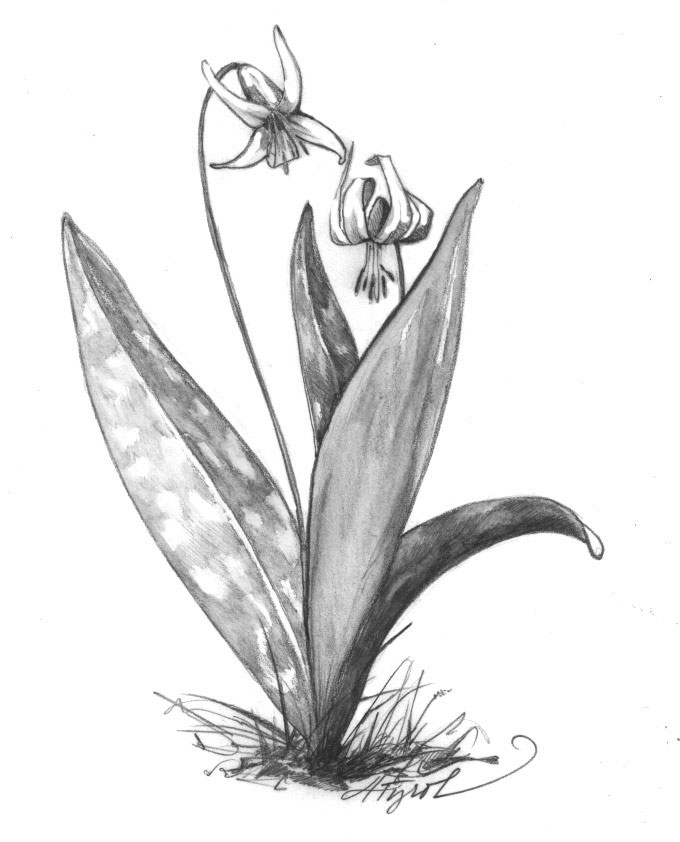 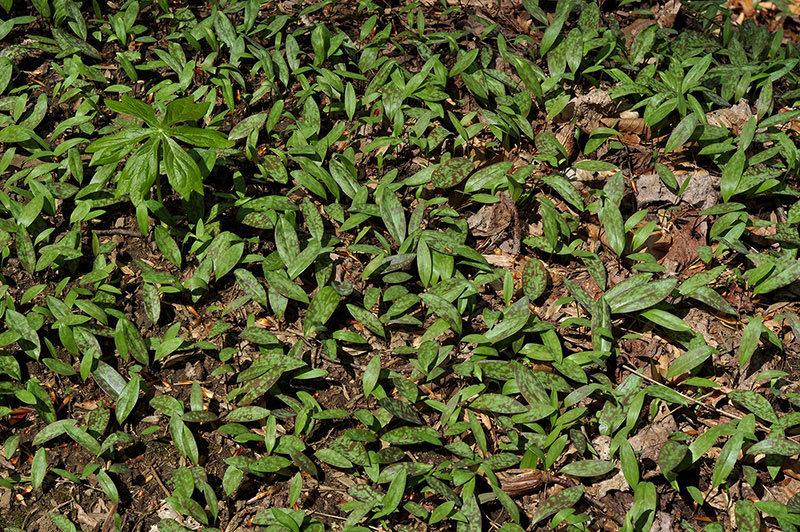 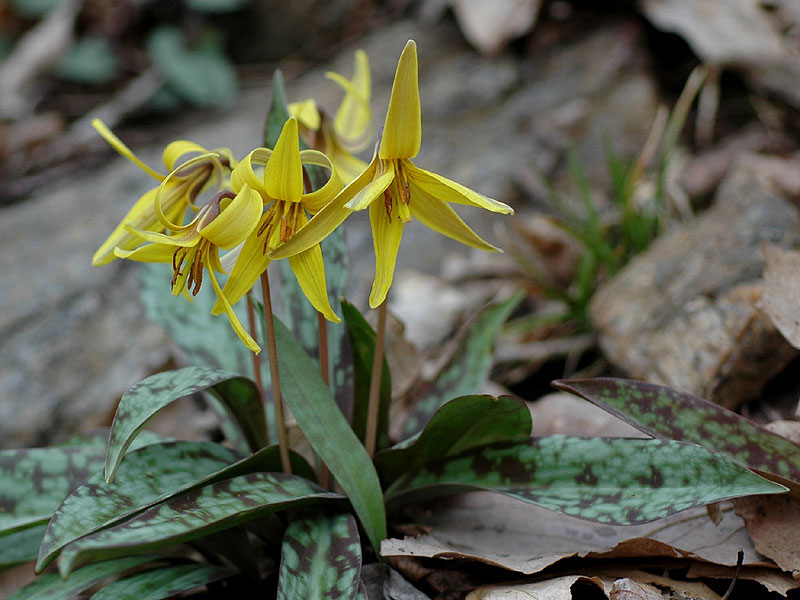 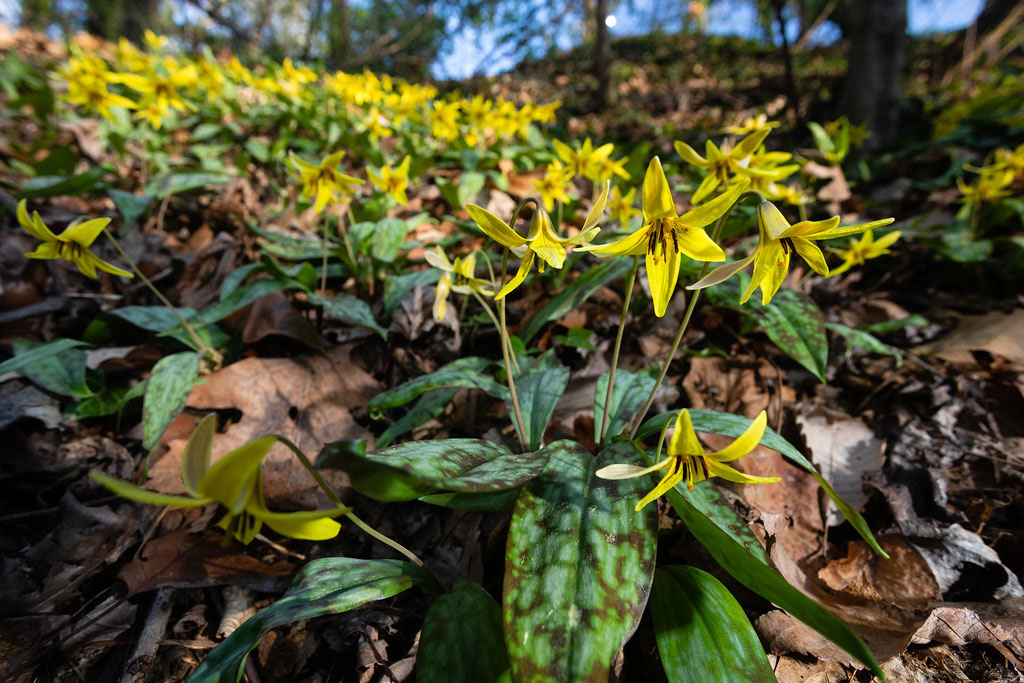 Later, the fertile flowers are replaced by obovoid seed capsules that are about ½ to ¾ inch in length or a little longer. These capsules are glabrous and their tops are truncate to round. The capsule starts out as green, changing to brown and splitting open into three sections to expose the crescent-shaped seeds. Ripening of the fruit starts from May to June.