Trending
You are at:Home»Herbs and Spices»Facts about Sea Holly – Eryngium maritimum 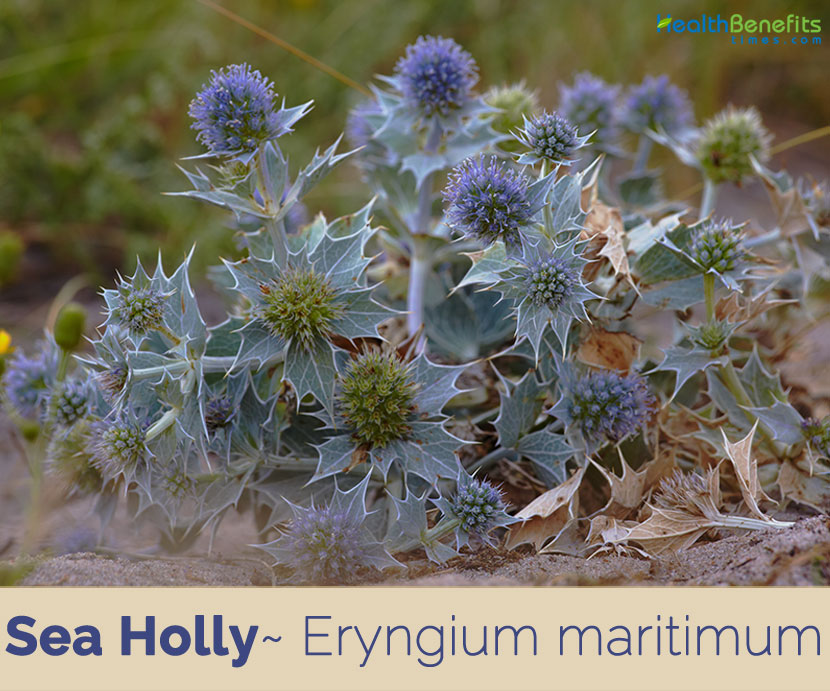 Eryngium maritimum, commonly called sea holly, is a coarse, perennial plant that features a summer bloom of steel-blue, thistle-like flower heads on branched stems rising from a rosette of dark green basal leaves. It is in fact a member of the Carrot family (the Umbellifers; Apiaceae), which includes plants such as Cow Parsley and Fennel. The plant is native to coastal sands and gravel in Europe, North Africa and South West Asia. Some of the well-known common names of the plant are Sea Holly, Seaside eryngo, eryngo, sea holme, sea hulver, Eringo and Ringo-roots. Genus name comes from an ancient Greek name used by Theophrastus for a plant which grew in Greece (probably Eryngium campestre) or is a Greek reference to the prickly or spiny nature of plants in this genus. The specific epithet is in no doubt: maritimum means ‘of the sea’.

Sea Holly is very useful as an ornamental plant when growing, and as a cut plant it can be effectively used for decorating the dining-room table and other parts of the house, even to the sick-room. After it has been used for these decorative purposes it may be kept and used medicinally, as it is one of the most useful medicinal plants known, and one which has been found very useful in curing disease in certain forms. Although widespread, it is considered endangered in many areas, such as Germany where its occurrence has been importantly reduced throughout and has become locally extinct in several districts.

Reproductive stems are 0.15–0.60 m tall. Lower part often root‐like and buried in the sand while aerial part pale below but with bluish tinge above, erect, robust, terete or sulcate, glabrous, solid and widely branched above so that the plant forms an open cushion.

The radical leaves are on stalks, 2 to 7 inches long, the blades cut into three broad divisions at the apex, coarsely toothed, the teeth ending in spines and undulated. The margin of the leaf is thickened and cartilaginous. The lower stem-leaves are shortly stalked, resembling the radical ones, but the upper ones are sessile and half embracing the stem, which terminates in a shortly-stalked head, below which it gives off two or three spreading branches, all from one point, which is surrounded by a whorl of three leaves, spreading like the rays of the sun.

Stiff, branched, violet-blue stems, bear abundant, egg-shaped, thistle-like, violet-blue flower heads, rise from each basal rosette in summer. Each flower head is a spherical-cylindrical umbel that is packed with tiny, stem less, violet-blue flowers. Each flower head is subtended by a narrow, spiky collar of spiny, blue-green bracts. Summer bloom is often plentiful. The calyx tube is thickly covered with soft, cartilaginous bristles; the calyx teeth end in a spine. E. maritimum starts blooming on the 4th–5th year. It blooms in July-August. The honey is secreted by a disk with 10 rays at the base, and is concealed.

Fertile flowers are followed by schizocarp, 8–14 (15) mm long , with persistent sepals, consisting of two mericarps each containing one seed; mericarps are 6–7 mm long, densely covered in narrow white scales and five ridges, the three dorsal ridges are indistinct, the two lateral ridges are more prominent and with air‐filled cells. Fruit when ripe are assisted in dispersal by the wind or passing herds, being detached and jerked to a distance. Fruits ripen during October. 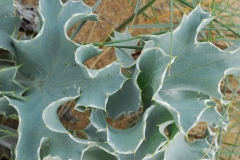 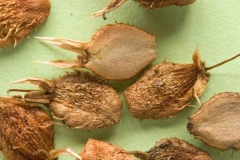 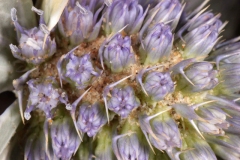 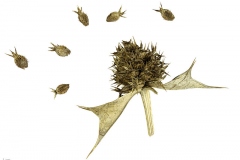 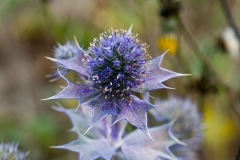 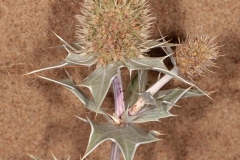 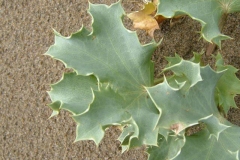 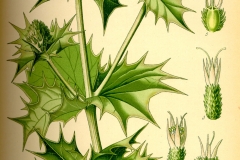 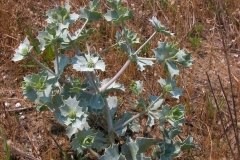 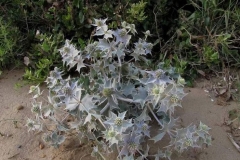 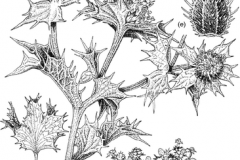 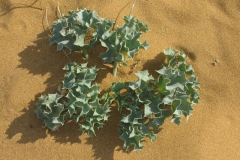 Several species of Eryngium have been cultivated as garden plants and are commonly available in most nurseries. Some of the most common sea holly plants include: 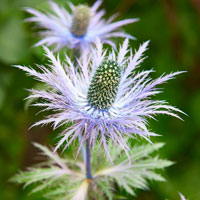 The plant is native to alpine pastures of Switzerland, and has deeply serrated bracts (petals) surrounding a central cone, giving the flower a lacy appearance. The plant grows 3 feet tall. 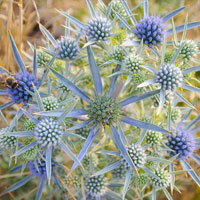 This European native is one of the coldest hardy of the genus. It is considered the hardiest species. It has beautiful amethyst blue flowers on plants 2-1/2 feet tall and a somewhat straggling nature. 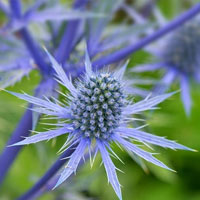 Eryngium planum has silver-blue flowers on plants that are 2-3 feet tall. Its leaves are scalloped rather than spiny. 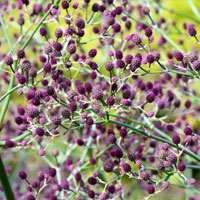 It is also known as Miss Wilmot’s Ghost (named for English gardener Ellen Wilmot), this Caucasus native makes an outstanding plant for grouping in a background, growing from 3 to 4 feet or higher. While it may require staking, its heart-shaped leaves and large flowers are worth the extra effort. 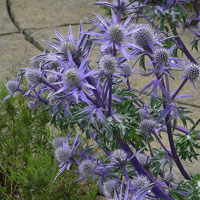 The plant is native to Pyrenees; this variety reaches about 1-2 feet and consists of lively blue-green flowers with silver bracts and white veins within its coarse, spiny leaves. 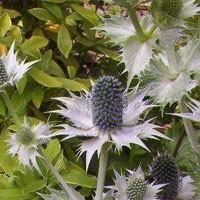 Eryngium giganteum gets its name from its dramatic ghostly gray-green to silvery blue flowers on plants up to 6 feet tall. It is also occasionally named giant sea holly. 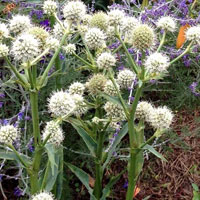 This variety of Eryngium yuccifolium is a native of the Great Plains. It is a stately plant which reaches 4-5 feet tall and bears silvery white balls on spiny foliage that look like that of yucca. Extracts of the plant were used by Native Americans as medicine. 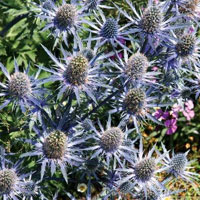 This Eryngium selection, also sometimes sold as ‘Jos Eijking’, is a sterile variety that does not self-sow.