Trending
You are at:Home»Poultry & Seafoods»Turbot fish facts and nutritional value 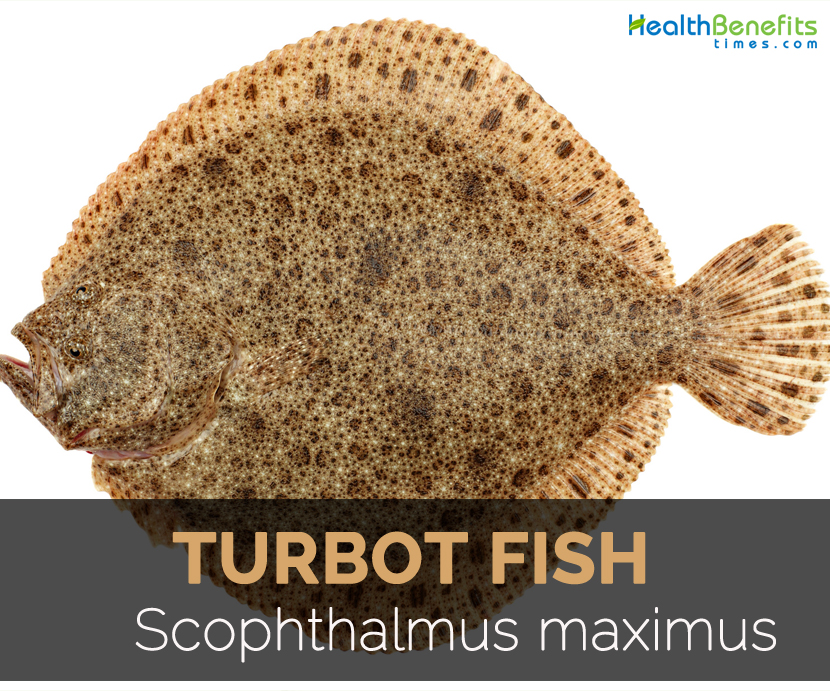 Breet, Britt, Butt, Turbot, Brat, European turbot and True turbot are the common names used to refer the species of flatfish within the family Scophthalmidae. The term was derived from Old French tourbout which is a derivative of Latin word turbo. They are usually found in muddy and sandy seabeds. It is also regarded as left sided flatfish which have both eyes on the left side of head. The body and head are mottled with various tubercles or bony knobs. The body is asymmetrical disk shaped or circular measuring about 100 cm (39 inches) long and 25 kg (55 lb) in weight. The color of the skin ranges from gray brown, light brown which is marked with dark color. It has bright white flesh and scaleless skin. When cooked, it provides subtle or refined flavor with delicate and mild taste. They feed on small fish, prawns and crustaceans. The spawning takes place from April to August. The female lays about 10 to 15 million eggs about 0.9-1.2 mm in size.

It is native to brackish or marine waters of Baltic Sea, North Atlantic and Mediterranean Sea. For two thousand years, Turbot is marked high in Europe. In 18th century, it was sold in Billingsgate Market in London.  In 19th century, the price varied from week to week due to instability in quantity.

Turbot is loaded with Vitamin B3, protein and Vitamin B12. It is also loaded with minerals such as magnesium, selenium and phosphorus which assist in the functions of immune system, maintenance of strong teeth, bones and supports metabolism. The daily intake of fish in moderate amounts helps to perceive the numerous health benefits whereas the excessive intake could reverse the health effects.

In Arctic, people have low chances of suffering from heart ailments as seafood has low content of saturated fat and high content of omega-3. It prevents the heart health from various diseases and lowers the cholesterol in blood. The study shows that high intake of fish lowers the chances of heart problems by half.

The intake of fish promotes circulation and lowers the chances of thrombosis. Seafood has DHA and EPA omega 3 oils that prevent the production of eicosanoids which is a hormone that could result inflammation and blood clots.

The addition of fish to the diet eases the rheumatoid arthritis symptoms that could swell up the joints. The research shows that omega-3 fat is associated with osteoarthritis so the intake of seafood helps to prevent from getting this disease.

The fish consumption assists in having the healthy and bright eyes. The study shows that Omega-3 fatty acids prevent the eyesight from macular degeneration which is a condition that degenerate retina and eyesight becomes blurred. Fish as well as shellfish has retinol that enhances night vision as it is the form of Vitamin A.

Seafood has various nutrients such as zinc, selenium, iodine and potassium which are essential for thyroid gland and prevention of cancer. Shellfish and fish are a great source of Vitamins such as Vitamin D and A.

The study shows that shellfish and fish assist the lung health. It provides relief from asthma symptoms in children. The high intake of fish strengthens the lungs.

Omega-3 prevents the harmful effects of UV rays from skin. The high intake of fish assists the symptoms of skin problems such as psoriasis and eczema. Fish has high content of protein which is essential for collagen to make the skin flexible and firm.

Brain is made upto 60% omega-3 fat. The research shows that high intake of seafood prevents the chances of memory problems and dementia. Seafood has Omega-3 fat which is associated to improve the reading skills, concentration, ADHD and behavior.

Turbot fish prefers muddy and sandy seabeds. They are hunters which feed on small fish. It is considered to be left sided flatfish which has both eyes on the left side of head. It grows upto one meter (40 inches) long and weighs 25 kilograms (55 pounds). Turbot becomes mature sexually in 3 to 5 years old and spawning takes place from April to August. The female produce 10 to 15 million of eggs. It resides on somewhat salty waters.