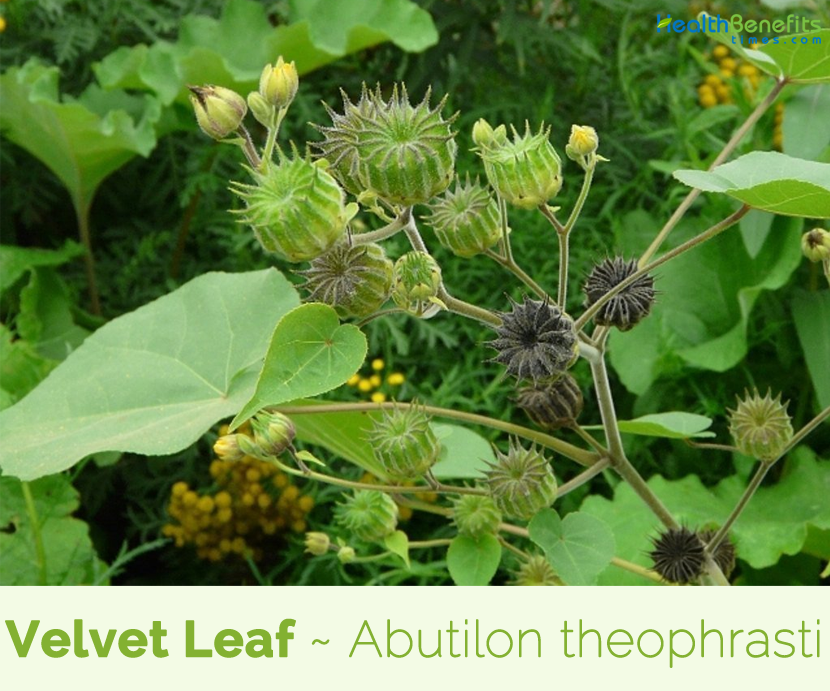 Its common name comes from the soft leaves which are covered in short hairs, making a velvety feel. Also known as butter print and China jute, A. theophrasti comes originally from India and tropical Asia and is in the mallow family (Malvaceae). It is a rather tall and lanky plant with large leaves. It is easy to identify because there is really nothing else in our area that resembles it. It is considered to be a noxious weed in several states, including Colorado, Iowa, Oregon and Washington.

Velvet Leaf is an erect, herbaceous, annual sub shrub-like herb that grows up to 8 feet tall, but most plants are in the 2-4 foot tall range. The plant is found growing in wasteland, vacant lots, gardens and cultivated fields, especially maize and soybean fields, along fence rows, abandoned fields, construction sites, roadsides, ditches, hillside slopes, riverbanks, disturbed areas, and crop fields. Normally the plant prefers sandy, loamy and clay soils and requires well-drained soil. The plant prefers acid, neutral and basic soils and can grow in very alkaline soil. It requires dry or moist soil. The plant has erect stems that are much branched in the upper part. The surface of the stem is smooth with short velvety hairs. The stem and twigs are covered with fine hairs.

Sixteen to sixty-three leaves per plant are alternately produced with long petioles, and a broadly heart-shaped blade. The width of the leaf blade is 7-20 cm and the leaf area ranges from 300 to 470 cm. it has a distinct odor when crushed. All parts of the plants except the petals are covered with short, dense velvety hairs.

Short-stalked flowers are borne singly or in clusters at the leaf axils. The mellow, orange-yellow flowers are about ½ to ¾ inch across with 5 squarish petals and a dense cluster of orange colored stamens and styles at the center. Calyx has five lance-like lobes about ¾ the length of the petals. The calyx surfaces and flower stalks are densely hairy. Flowering normally takes place from July to August.

Fertile flowers are followed by thick, round button-like seed pods or capsules, made up of 12 to 15 seed compartments (carpels) about 1.3-2.5 cm long and 2.5 cm wide, each with a sharp spiny beak at its outer tip, and densely covered in velvety hairs. Each compartment contains up to 15 seeds. A mature plant can produce 17,000 seeds. Seeds can remain viable in the soil for over 50 years.

Seeds are kidney-shaped to nearly triangular in outline, prominently notched along margin where hilum occurs, compressed (thickened along the margin opposite the hilum and usually with a rounded, concave area on each face, creating a bilobed cross-section), 2- 4 mm long, 2.2–3.2 mm wide and 1.5–1.9 mm thick. Surface is dull, purplish-gray to brown or black, minutely honeycombed, typically sparsely covered (thicker around notch) with tiny branched hairs with orangish bases. 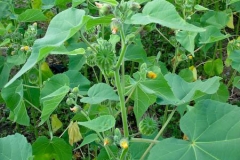 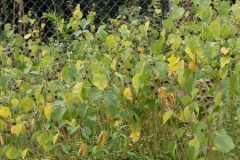 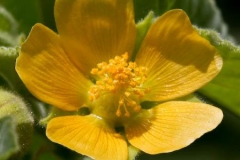 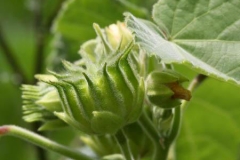 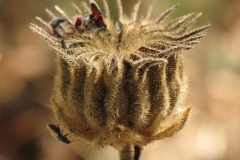 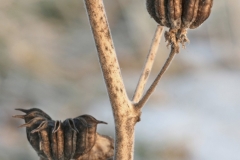 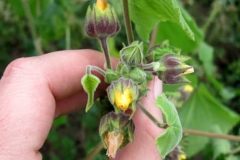 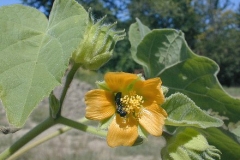 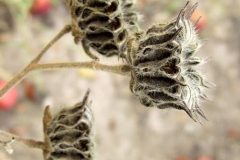 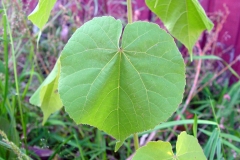 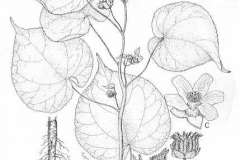 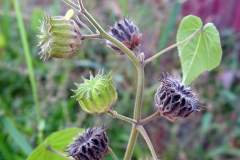 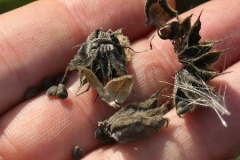 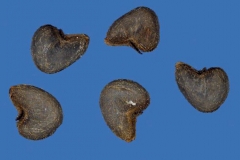 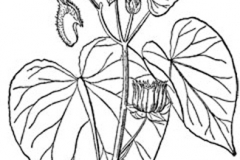 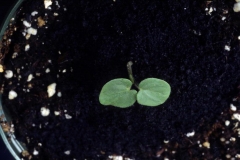 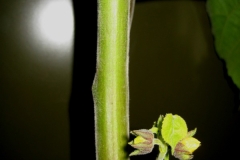 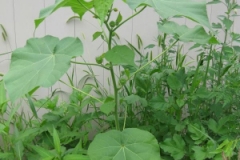 Sato et al. (2000) noted that a living mulch of Italian ryegrass reduced yield loss in the late spring sowing of maize in Japan. Lueschen and Andersen recommended that intensive tillage could decrease the seed population.

Hand-pulling can be effective on young seedlings but is impractical in large fields of maize, soybeans and cotton in intensive agriculture. Machine intertillage in row crops is also effective only in relatively small fields.

Effective herbicides include metribuzin, atrazine, 2, 4-D, bentazone, bromoxynil, cyanazine, dicamba, linuron, halosulfuron-methyl and fluthiacet-methyl. However, triazine-resistant biotypes of A. theophrasti have been reported in Maryland, Wisconsin and Minnesota, USA.

Niesthrea lousianica, Fusarium lateritium and Colletotrichum coccodes have been considered as potential agents for biological control or mycoherbicides. In field tests, pre-emergence applications of F. lateritium in granular formulation gave 46 and 35% control of A. theophrasti in 1982 and 1983, respectively.