Trending
You are at:Home»Herbs and Spices»Traditional uses and benefits of Viper’s Bugloss – Echium vulgare 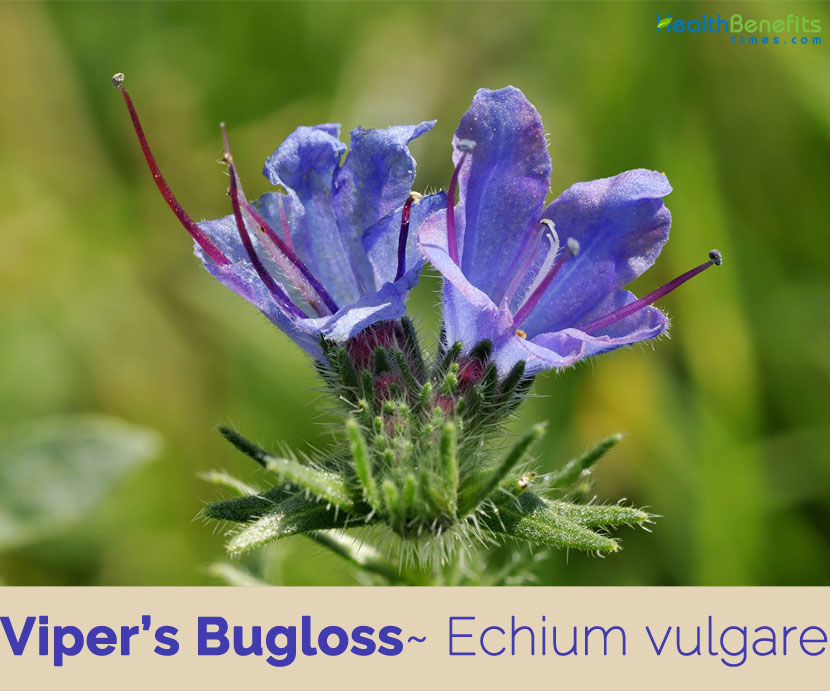 Blueweed, Blue echium, Blue thistle, Blue-devil, Common echium, Common viper’s bugloss, Common vipersbugloss, Viper’s-bugloss, Vipers bugloss, Blue devil are few of the popular common names of the plant. Echium is the Greek name for this plant. It is derived from echis which means viper in reference to the nutlet shape which resembles the head of a viper and the ancient medicinal use of the plant root as a treatment for snakebite. Specific epithet means common. Plants were once used as a treatment for snake/viper bites. Plant nutlets are reported to resemble snake/viper heads.

Viper’s Bugloss (Blueweed) is an upright, relatively long-lived biennial or monocarpic perennial herbaceous plant that normally grows about 30-60 cm tall, but occasionally reaching up to 1.2 m in height. The plant is found growing in roadsides, open waste and disturbed land, stony riverbeds, cliffs near the sea,  on walls, old quarries, gravel pits, calcareous grassland and heaths, bare and waste places, railways, coastal cliffs, sand dunes and shingle, pastures, waterways, overgrazed pastures, gravel bars, moist upland forests. The plant is often found in alkaline soils with a dolomite or limestone base material, although it can also be found in areas with more acidic soils. While blueweed displays a preference for sandy, well-drained soils, it does not do well in very arid regions. The plant has significant rooting system comprised of a taproot and smaller fibrous roots. Taproot is black with a reddish cast, ranging in length from 12 to 32 inches (30.5 to 81 cm).

The upright and usually unbranched stems arise from a basal rosette of leaves. They are covered in short, stiff hairs and grow 30 – 80 cm tall.  These stems are green in color and covered in stiff hairs or bristles. They generally have conspicuous dark flecks at the bases of some hairs. There may be one to several stems per plant. 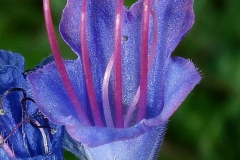 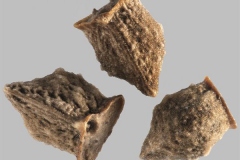 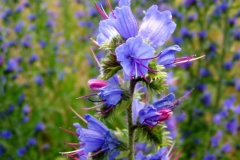 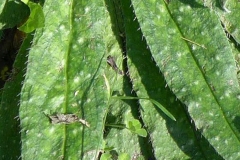 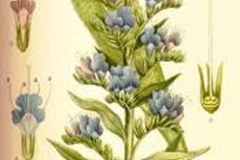 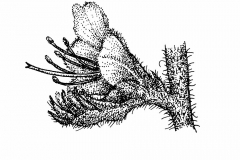 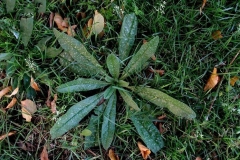 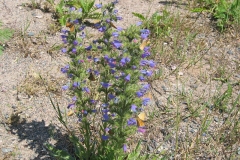 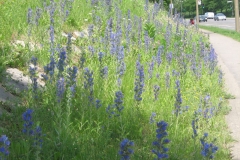 Stems terminate in inflorescences that are ½–2 feet long. They consist of spike-like racemes of short scorpioid cymes. The cymes are incurled like a scorpion’s tail, and they contain up to 20 flowers each. The sessile flowers are arranged along only one side of the cyme. Each flower is about ¾ inches across and 1 inch long, consisting of a deep blue or blue-violet corolla with 5 shallow lobes, 5 grayish green sepals, 5 stamens with reddish purple filaments, a slender white style with a divided tip, and a 4-lobed ovary. The large corolla is campanulate (bell-shaped), but longer above than below. The sepals are grayish green, linear-oblong in shape, and covered with stiff bristly hairs. Both the stamens and style are strongly exserted from the corolla. At the base of each cyme, there is a linear-lanceolate leafy bract up to 1 inch long that is grayish green and covered with stiff bristly hairs. The central stalk of the inflorescence has the same characteristics as the central stem. The blooming period occurs during the summer and early autumn, lasting 1-3 months. The plant is an insect attracting plant, including various bees, bumblebees and butterflies

Fertile flowers are followed by a cluster of four seeds (i.e. nutlets or mericarps) that are enclosed by five bristly bracts (i.e. the persistent sepals). Seeds are 0.8-0.12 in. (2-3 mm) long and are greyish-brown in color woody, three-angled, and roughly textured (i.e. strongly wrinkled and pitted). The surface of the seed is rough and very hard. They are spread by the wind or humans and animals.