Trending
You are at:Home»Herbs and Spices»Uses and benefits of Male Fern – Dryopteris filix-mas 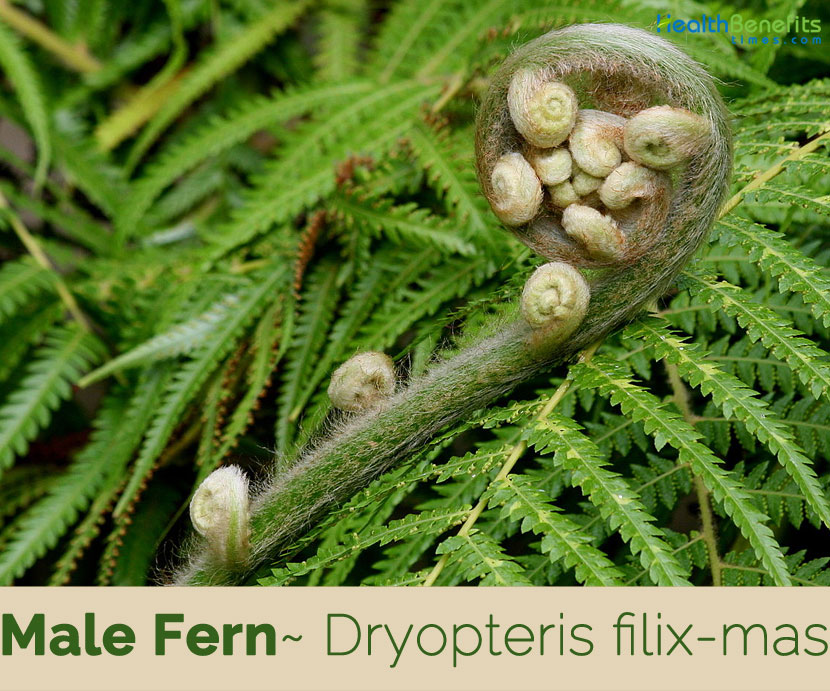 Dryopteris filix-mas, commonly known as male fern or bear’s paw are a common fern belonging to Wood Fern family (Dryopteridaceae). The plant is native to temperate Northern Hemisphere, much of Europe, Asia, and North America. It is much less abundant in North America than in Europe. The plant is sometimes referred to in ancient literature as worm fern, reflecting its former use against tapeworm. Some of the popular common names of the plant are Aspidium, Bear’s paw, Knotty brake, Male fern, Marginal fern, Shield fern, Worm fern, Sweet Brake, Dryopteris, Japanese flowering fern rhizome, Male fern rhizome, helecho macho and wurmfarn. It is also known as the ‘bears paw’ probably because the resemblance of its rhizome or tubers that are hairy and dark brown.

Male Fern supposedly got its common name from the shape of the creeping rhizome which, in some way looks like a bear’s paw. The genus name Dryopteris, is derived from two Greek words, drys, meaning ‘tree’, and pteris, meaning ‘fern’. Many members of this genus are commonly referred to as wood ferns. The species, filix-mas, is from the Latin filix meaning fern and mas meaning male in reference to the somewhat vigorous growing habits of ferns in this species. The plant was thought to be the male version of the common lady fern Athyrium filix-femina being robust in appearance and vigorous in growth.

Male Fern is a large, hardy, vigorous, semi-evergreen, clump-forming ornamental fern that normally grows up to 1-3 feet tall and almost equal spread. The plant is found growing in rich woods, glades, upland pastures, and hardwood to mixed forest, rocky groves, rocky grove slopes, cliff bases and rock fields, damp shaded areas in the understory of woodlands shady places on hedge-banks and screes. The plant is easily grown in average, medium moisture, well-drained soils. It prefers consistently moist, humusy soils that are rich in organic matter. Soils should not be allowed to dry out.

Rhizome or tuber of the male fern is reddish brown in color and is usually small, bulky and scaled. The root – stock or rhizome is short, stumpy and creeping, lying along the surface of the ground or just below it. From it’s under surface spring the slender, matted roots. The crown of the rhizome is a brown, tangled mass, with the hairy bases of the leaves, and in it is contained the mass of undeveloped fronds which, as they unroll, grow in a large circular tuft. The rhizome is brownish black, ovoid-cylindrical pieces about 6-15cm long and 3-4 cm in diameter. The rhizome used is three to six inches long, and with the closely imbricated and slightly curved remnants of the stipes two to three inches thick. The latter remains green for about a year after which it turns brown. The rhizome is fleshy, externally dark brown, internally pale green and spongy. On transverse section near the surface eight larger fibro vascular bundles arranged in an interrupted circle, outside of which are a number of smaller ones. The stipes has about eight small vascular bundles in a loose circle. The spongy texture is due to the thin walled parenchyma and to the large intercellular spaces, into which stalked glands project which exude a green liquid. The rhizome has a slight disagreeable odor and a sweetish afterward, somewhat bitter astringent and nauseous taste. 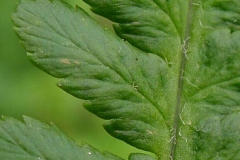 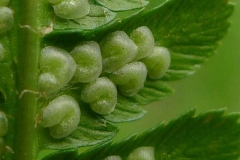 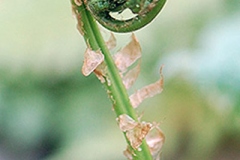 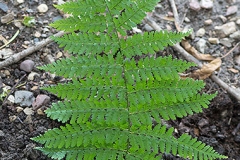 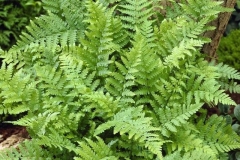 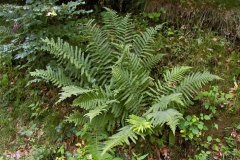 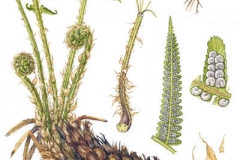 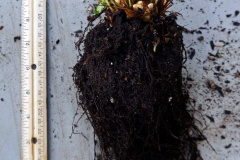 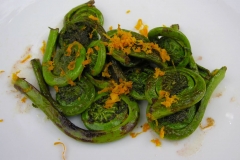 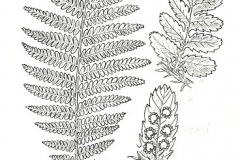 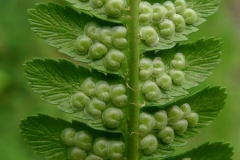 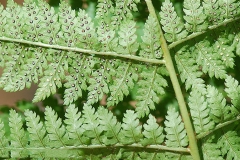 The plant bears insipid green leaves also known as fronds. Fronds are usually dark green in color. The blades are ovate to narrowly lanceolate, up to 12 inches wide, widest about 1/3 of the way up from the base and gradually narrowing to a pointed tip. There is no visual difference between the fronds that have fertile sori and those that may not. There are no aromatic glands. Fronds are firm, not leathery, and die back in the fall, but may remain green overwinter. The central rachis is green with pale tan scales on the underside. The grooved stipe is quite short, forming less than 1/4 the length of the frond. The brown scales of the stipe are distinctive, being of two kinds – one hair-like and one broad. Fiddleheads emerge almost covered with the scales.

The pinnae are narrow and pointed to the tip with the basal pinnae much reduced in size. Pinnae are mostly in the plane of the blade, but young fronds can give the appearance of pinnae tilted upward from the blade plane, similar to those of the Crested Fern. Also, the lower Pinnae are shorter and somewhat tilted downward, similar to some other members of the Dryopteris. The division pattern is pinnate-pinnatifid and sometimes bi-pinnate near the base. On the rachis, the pinnae are not opposite each other but slightly offset. The upper side of the costa is grooved but the groove does not meet the groove on the rachis.

There will be 24+/- pairs of short pinnules on the pinnae. Margins of the pinnules are lobed and the lobes are slightly toothed, with pointed lobe tips at the end of the pinnule veins. There is no difference in length of the adjacent basal pinnules.

The sori are on the upper half of the frond, at the back of the pinnules, in round masses towards the base of the segments, covered with a conspicuous, kidney shaped thin membrane. On the underside of the fronds, there are two rows of dark brown spores.

Male fern is native to the temperate climates of Asia, Europe, and much of South and North America. The plant is highly adaptable and can grow well in both arid and fertile soils. Root of the male fern, usually harvested in early autumn, is dried for therapeutic purposes. As far back as 103 A.D., Greek and Roman physicians used the male fern root to help expel harmful organisms from the intestines and digestive tract. In fact, it is rumored that Louis XVI of France paid large sums of money to add this powerful fern to his own medicine chest.