Trending
You are at:Home»Herbs and Spices»Traditional uses and benefits of Weeping Fig 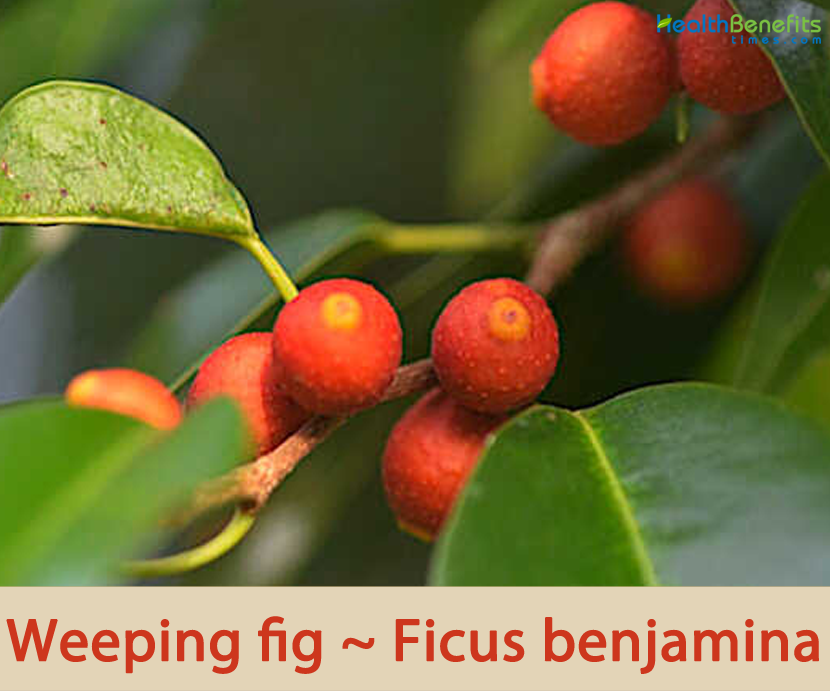 Genus name comes from the Latin name for the edible fig. It can grow as a tree or shrub and forms slightly droopy, overhanging branches, hence the nickname weeping fig. Similarly another reason behind the name is the trees are succulent and they store water in their trunks and branches hence the name weeping fig. The tree is harvested from the wild for local use as a medicine and source of fiber plus a low quality wood. It is very ornamental, being widely cultivated in the tropics and subtropics and used as an avenue and shade-providing tree. It has long been an extremely popular indoor houseplant because of its attractive shape and tolerance for a variety of growing conditions. The plant is grown as a pioneer species in reforestation projects in Thailand.

Weeping fig is a large, slow-growing, spreading, strangling fig tree that normally grows up to 50 feet (15 m) outdoors and 3 to 6 feet tall when grown indoors. The bole can be 30 – 60 cm in diameter. Roots are adventitious, occasionally hanging. Crown is symmetrical, spherical hemispherical, which becomes wider with age, having a rather irregular outline, and dense foliage of fine texture. The trunk is somewhat pale and smooth and can grow to 3m in girth on mature, outdoor trees. Bark is light gray and smooth. The bark of young branches is brownish. The plant usually begins life as an epiphyte, growing in the branch of another tree; as it grows older it sends down aerial roots which, when they reach the ground quickly form roots and become much thicker and more vigorous. They supply nutrients to the fig, allowing it to grow faster than the host tree. The aerial roots gradually encircle the host tree, preventing its main trunk from expanding, whilst at the same time the foliage smothers the foliage of the host. Eventually the host dies, leaving the fig to carry on growing without competition.

The plant is found growing in moist mixed forests, near villages, towns, roadsides, disturbed thickets and hammocks. It thrive in fertile, moist soils in full sun but it can tolerate drought and a wide range of soil types including clay, loam, and sand, as well as well-drained, with pH levels ranging from acidic to alkaline. It is a very popular house plant, due to its elegant growth and tolerance of poor growing conditions. It does best under bright, sunny conditions but will also tolerate considerable shade. It requires a moderate amount of watering in summer, and only enough to keep it from drying out in the winter. It does not need to be misted. The plant is sensitive to cold and should be protected from strong drafts. When grown indoors, it can grow too large for its situation, and may need drastic pruning or replacing.

Leaves are simple, leathery and intensely green, their shape is mainly ovate but often lanceolate or broad – elliptic, and their dimensions range between 3.6 to 12.5 cm in length, and 1.5 to 6 cm in width. They are arranged alternately on the shoots, with which they are connected by a petiole 5 to 30 mm long and 0.7 to 1.5 mm in diameter, which is adaxially sulcate and has a permanent skin. The base of the lamina is rounded to broad cuneate shaped and sometimes cordate, the margins are entire, while the apex is relatively short and acuminate. The cystoliths are visible on the adaxial surface of the blade as raised dots, and the waxy glands are either absent or present at the base of the mid vein, at the junction with petiole.

On either side of the mid vein are 8 to 10 almost regularly spaced secondary nerves, which are anastomosed near the margins, while the tertiary nerves are also visible. The stipules are 2, amplexicaul, caducous, membranous, and glabrous, lanceolate and 8 to 20 mm long. Leaves can be a shiny dark green or light green or creamy white and become darker green as the plant ages.

The syconiums or figs (hypanthodia) are a special form of inflorescence and not the botanical fruit of the tree. Inside them are bearing the flowers (florets), which are of 3 types, including on the one hand the males and on the other the fertile females and the sterile females (or galls) – all hairless.

The male florets are few in number, are carried on a short peduncle, have a stamen on a relatively long filament, and are surrounded by a three-lobed or four-lobed calyx, with broadly ovate lobes. The female florets are sessile, they have a short and curved style (lateral) with an enlarged stigma, and they are surrounded by a three-lobed calyx, with shortly spatulate lobes.

The gall florets are numerous, sometimes they have a peduncle and sometimes they do not, they have a short and curved style (lateral), and they are surrounded by a three-lobed, four-lobed and / or five-lobed calyx, with narrowly spatulate lobes.

The syconia, which are joined directly to the hypanthium, grow in the axils of the leaves, singly or more usually in pairs. They have a spherical-ovoid or elliptic shape, sometimes they are  pear-shaped, and their color is initially green and then purple, yellow, red, or dark red when ripe, with indistinguishable protruding rounded white spots on the surface.

Their size varies, having dimensions of 0.7 to 1 cm width, 0.8 to 1.5 cm length and have a diameter of 2.0 to 2.5 cm (3⁄4 to 1 inch). Also, the syconia enclose 2 to 3 unequal persistent bracts at the base, 0.5-1.5 mm wide which are crescentric and hairless, while the umbonate ostiole area is enclosed by another 3 minutes, flat and smooth imbricate bracts, 1.5 to 2 mm wide. Inside the figs are the real botanical fruits, the achene, which have an ovoid-reniform shape, while they are shorter than the persistent style. 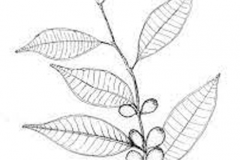 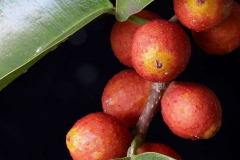 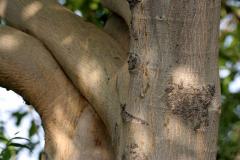 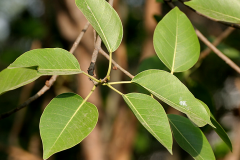 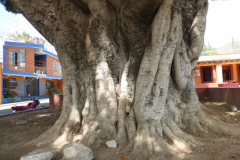 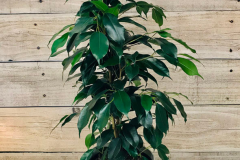 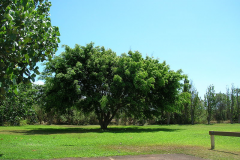 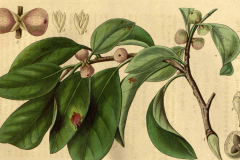 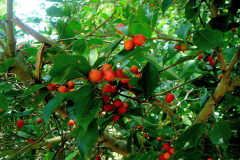 Ficus come in a wide range of varieties: some larger, some smaller. Each variety can have entirely green foliage or a mix of colors such as yellow, green, and white. Varieties with bright leaves usually require more light, while entirely green plants can also grow in partial shade.

Ficus benjamina is widely planted in dense concentrations on Maui in most urban areas and is presently not spreading in Hawai’i due to the fact that its pollinator wasp has not yet been introduced. Should the wasp arrive and successfully establish on Maui, the small size of fruit, large population size, and epiphytic nature may lead to an aggressive invasive nature similar to that of the pest, Ficus microcarpa, though this is not certain. For now, F. benjamina is a widely planted tree that is not spreading and the best way to keep it that way is to prevent the arrival of its associated pollinator wasp.

Control of Ficus species seems daunting and is just beginning to be explored in Hawai’i. It is uncertain if small seedlings on the ground or as epiphytes can be pulled. Often, trees will germinate on and grow as epiphytes on other desirable trees, concrete structures, and fence posts. These are occasionally out of reach or on steep dangerous terrain. Care will need to be taken in order to successfully kill the unwanted Ficus while preserving the host. Without control, the host tree or structure is in danger of destruction through strangulation.

Hammer reports the following. “Fig trees are particularly sensitive to triclopyr herbicides as a basal or cut-stump treatment. Trees found growing on concrete or rock structures should be treated with herbicide while young to avoid costly structural damage. Use extreme caution when applying herbicide to figs growing as epiphytes to ensure that the poison does not contact the host tree. When exotic figs germinate high in the branches of large trees in natural forest communities, it may be extraordinarily difficult to get close enough to the fig to treat it.”

The pollinator wasps should be prevented from entering Hawai’i in order to prevent spread of F. benjamina.