White bryony takes its name from its scientific name Alba,meaning ’white’, but in fact its flowers are no whiter than its berries. Its corolla is lime green and its berries are pitch black. The name comes from the plant’s white latex. The plants grow quickly and usually grow to a height of 10 feet attaching themselves to nearby trees with the help of their tendrils. The whole plant is rather succulent, bright green and somewhat shining.

White bryony is a rapidly growing herbaceous, perennial plant or vigorous vine that grows about 2–3 m (80–120 in.) tall. The plant is usually found growing in old gardens, walls, fences, roadsides and dump. The plant has thick tuberous root that is dirty white, fleshy and encircles a milky juice that has a horrible smell. Leaves are palm-shaped, alternate, broadly five lobed which are covered on upper and lower surfaces by small white glands.Terminal leaflet is modified into a tendril that is rough-hairy.

The plant has small greenish-yellow or yellowish flowers with green veins and has 5 petals that measure ½ inch across, that grow in cluster at the axil. There are separate male and female flowers.  The male flowers are larger than the female ones.  They have 5 sepals, and 5 green veined petals, and 5 stamens (one free and two joined pairs). The female flowers are smaller and have 3 downy stigmas. The petals have small hairs on them. Flowering normally takes place from May to June. The fertile flowers are easily distinguished from the barren by the presence of an ovary beneath the calyx and are generally either stalk less (sessile) or with very short stalks – two to five together.

Fertile flowers are followed by thin-skinned smooth surfaced and globular fruits (berries) that usually enclose one or two seeds. These berries are spherical and have size of a pea about 1.5 cm (0.59 in) in diameter. Fruits are initially light green, and change to black when mature. Fruits are filled with juice of an unpleasant, fetid odor and contain three to six large seeds that are slight ovoid to oblong, somewhat flattened, grayish-yellow, mottled with black, and are unwholesome to eat.

Bartholomew’s Anglicus tells us that Augustus Caesar wore a wreath of bryony during a thunderstorm to protect himself from lightning. The nauseous and bitter root juice was recommended by Galen and Dioscorides as a violent purgative. Called wild nep, it was valued in the 14th century as an antidote to leprosy. Nowadays since it is toxic it is found used in limited amount for curing several health problems.

Culpeper says it is a “furious martial plant,” good for many complaints such as “stitches in the side, palsies, cramps, convulsions…The root cleanse the skin wonderfully from all black and blue spots, freckles, morphew, leprosy, foul scars, or other deformity whatsoever: as also all running scabs and manginess.” The root is acrid and cathartic and the berries poisonous. The root was given for dropsy, sciatica, rheumatism, lumbago, gout, pleurisy, influenza, bronchitis and whooping cough. If applied to the skin, the root produces redness and even blisters. Withering noted that a decoction made by boiling one pound of the fresh root in water is “the best purge for horned cattle.” 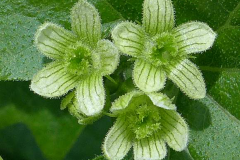 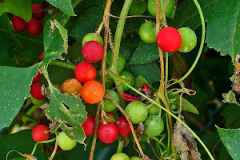 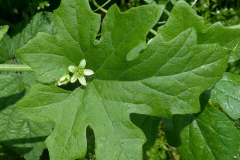 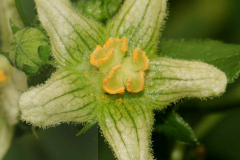 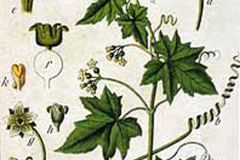 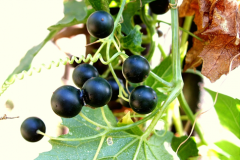 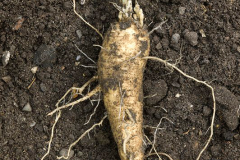 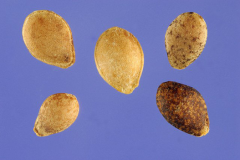 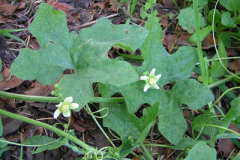 Listed below are few of the homeopathic remedy of using White Bryony. Consult with a qualified healthcare provider for specific questions regarding therapies and/or health conditions, and prior to making therapeutic decisions

Patients who undergo physical symptoms like reddened, tender and distended nose, a hoarse and tightened throat as well as a dry cough may find the homeopathic remedy White Bryony beneficial. Such patients generally have cracked and itchy lips, while their mouth is dehydrated and there is a white coating on the tongue. The other physical symptoms of patients needing White Bryony may include an acute and terrible headache, an intense thirst as well as profuse sweating.

White Bryony is an ideal homeopathic remedy for people who suffer from tremendous dehydration in the mouth, throat, mucous membranes and chest accompanied by an irritating cough and stabbing chest pain. The patient generally finds relief from headaches, pain in the rib cage or the chest when he/ she press the chest when there is a cough outburst.

People requiring White Bryony are those who tolerate a rupturing, splitting headache on their forehead or above the left eye and even the slightest movement of the eyeball hurts them. The pain gradually spreads to the rear of the head and, subsequently, to their entire head and usually the condition continues for the whole day. In such cases, the patients may have dehydrated mouth and may experience an intense thirst.

When the joints as well as the muscles become hot, distended and rigid accompanied by a sharp pain, normally owing to arthritis, gout or tenosynovitis or following any type of injury, using the homeopathic remedy White Bryony provides relief from the symptoms.

The root used to be seen suspended in herb shops, sometimes trimmed into a rude human form. In Green’s Universal Herbal of 1832 we read:“The roots of Bryony grow to a vast size and have been formerly by imposters brought into a human shape, carried about the country and shown for Mandrakes to the common people. The method which these knaves practiced was to open the earth round a young, thriving Bryony plant, being careful not to disturb the lower fibers of the root; to fix a mould, such as is used by those who make plaster figures, close to the root, and then to fill in the earth about the root, leaving it to grow to the shape of the mould, which is effected in one summer.