The names were derived from an Ancient Greek legend. Hyacinthus was a handsome young man who attracted the attention of the god Apollo. One day while teaching Hyacinthus how to throw the discus, Apollo accidentally hit Hyacinthus on the head, killing him. A hyacinth flower appeared where the blood of Hyacinthus hit the ground. Apollo’s tears fell onto the flower, spelling out AI AI on the petals. The word meant “Alas”. The derivation of the name Hyacinthoides non-scripta is interesting. The genus name Hyacinthoides means “like a hyacinth”. The species name means”unlettered”. The names were assigned by Carl Linnaeus, the Swedish botanist who created the modern binomial system for naming organisms.

Hyacinthoides non-scripta (formerly Endymion non-scriptus or Scilla non-scripta) is a vigorous, bulbous perennial plant that grows up to 12-18 inch (30-45 cm) tall. The plant is found growing in moist, deciduous woodlands, partially shaded area of the yard, along hedgerows, beneath orchard trees, shady banks, under bracken on coastal cliffs, uplands, meadows, under bracken in upland areas and garden escape. The plant is easily grown in average, medium moisture, well-drained soil but prefers sandy well-drained soils. It is best to avoid un-amended clay soils. The plant grows from a bulb. The bulbs produce contractile roots; when these roots contract, they draw the bulbs down into deeper layers of the soil where there is greater moisture, reaching depths of 10–12 cm (3.9–4.7 in). Each bulb produces a small clump of linear; basal leaves around 7 mm to 25 mm wide and 45 cm long, strap-shaped with a pointed tip.They are smooth and hairless with a succulent appearance. Normally 3-6 leaves appear from single bulb.

The tubular or bell-shaped flowers are usually blue or violet blue in color but are sometimes pink or white. Tips of the flower petals are strongly recurved (curved upwards). Each flower has six petals, though technically these are composed of three outer sepals and three inner petals.The sepals and petals look identical and are properly referred to as tepals. The flower contains six stamens (the male reproductive structures). The anthers of the stamens, or the sacs that contain the pollen, are cream in color but may darken with age. The pistil, or female structure, consists of three fused carpels. Bluebell flowers are borne in a raceme. A raceme is a group of flowers successively attached to the same flower stem via a short stalk, or pedicel. The flowers at the bottom of the raceme open first. Flowering normally takes place between mid-April and late May. Fertile flowers are followed by papery capsules that contain three lobes, each containing a seed. Fruits are initially green when unripe and light brown when ripe. Seeds are small and black colored, and germinate on the soil surface. 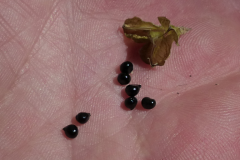 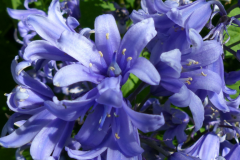 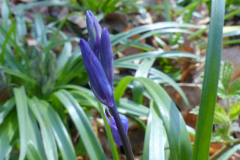 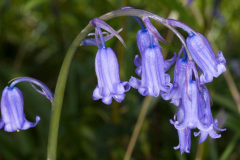 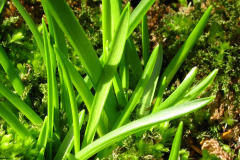 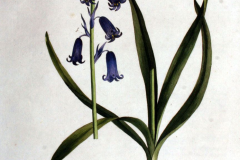 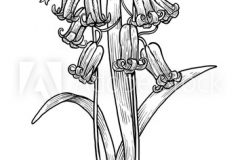 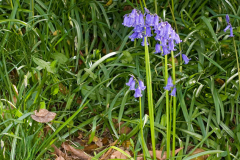 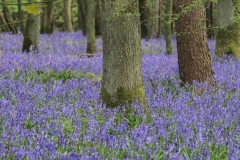 It abounds in a slimy juice, but it is to be dried, and this must be done carefully; the decoction of it operates well by urine, and the powder is balsamic, and somewhat styptic. It is not enough known: there is hardly a more powerful remedy for the whites [discharges or leucorrhoea.” The bulbs of bluebells are poisonous in the fresh state and have diuretic and styptic properties. The abundant mucilage (gluey substance produced by most plants) was used as a substitute for starch when stiff ruffs were worn. It was also used for fixing feathers onto the shafts of arrows, instead of glue, and as bookbinders’ gum for the covers of books.

The non-scripta or non-scriptum part of the botanical name means “unlettered” or “unmarked,” to distinguish it from the classical hyacinth of Greek mythology. Tennyson speaks of bluebell juice being used to cure snake-bite. To the 19th century Romantic poets the bluebell symbolized solitude and regret.

Traditional uses and benefits of Bluebells

Spanish Invasion in the Woods

In spring bluebells cover woodland floors and are often used as an indicator species to identify ancient woodlands. It is estimated that 70 percent of all common bluebells are found in Great Britain. However, there has been extensive hybridization with the recently introduced, and more vigorous,Spanish bluebell, Hyacinthoides hispanica. As the hybrids can thrive in a wide range of environmental conditions, they are frequently out competing native bluebells. The easiest ways to identify the Spanish bluebell or one of its offspring are that the stems are upright and not nodding, and the flowers are borne on more than one side of the flowering stem. Real bluebell woods have a remarkable fragrance, whereas the scent of other bluebells is less strong and less sweet.