Trending
You are at:Home»Herbs and Spices»Facts and benefits of White Turtlehead 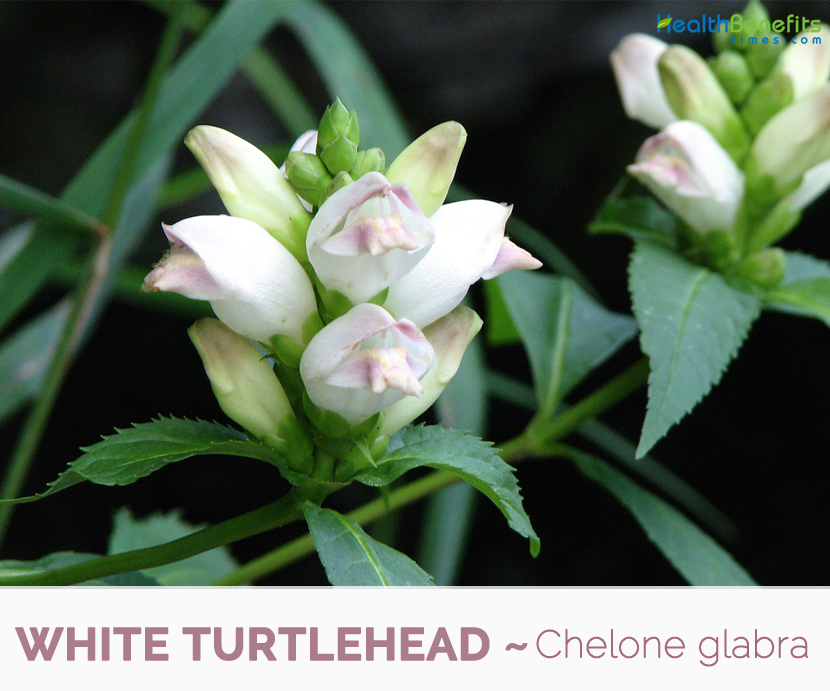 White Turtlehead also known as Balmony, Snake-head, Turtle Bloom, Fishmouth, Shell Flower, Bitter Herb, Turtlehead, salt rheum weed, shellflower, rheumatism wort and salt rheum weed is a perennial herb with scientific name Chelone glabra.  Its classification has in the past been controversial, but as a result of DNA sequence studies, it is now regarded as belonging to family Plantaginaceae (the plantain family) but formerly in the Scrophulariaceae (Snapdragon Family).In spite of being a relatively unknown flower to many, the plant has several nicknames. The plant is native to Eastern and Central North America and Canada. Its native range extends from Georgia to Newfoundland and Labrador and from Mississippi to Manitoba. Its natural habitat is wet areas, such as riparian forests and swamps. Genus name comes from the Greek word chelone meaning tortoise in reference to the turtlehead shape of the flowers and its species name of glabra means smooth.­­

White Turtlehead is an herbaceous, perennial, smooth herb that grows about 2 to 4 feet tall and spread 1.5 to 2.5 feet. The plant is found growing in margins of swamps, wet woods and rivers, woodland garden sunny edge, dappled shade, shady edge and bog garden. It best grown in moist to wet, rich, humusy soils in part shade and appreciates good composted leaf mulch, particularly in sunny areas. The plant’s root system consists of taproot and rhizomes and has smooth, stout, upright stems.

Each pair of opposite leaves rotates 90° from the position of the pair of leaves immediately below. Leaves are 8 inches long and 1½ inches wide and they are linear-lanceolate in shape. However, the typical variety of White Turtlehead has some leaves greater than ¾” and they are lanceolate or oblong-lanceolate in shape. The leaves are hairless and finely serrated along their margins. At their bases, the leaves are sessile, or they have petioles that are less than ¼” in length. The central stem terminates in a dense spike of white flowers about 3-6″ in length, blooming from the bottom to the top. The leaves have a slight somewhat tea-like odor and a markedly bitter taste.

Each flower is about 1 to 1½ inches long, consisting of a 2-lipped white corolla, a green calyx with 5 oval teeth, a slender white style, and 5 hairy stamens. Four of these stamens have fertile anthers, while the remaining stamen is sterile and green. The tubular corolla is somewhat flattened at the mouth, where it is more wide than tall. The upper lip of the corolla functions as a protective hood, while the lower lip has 2-3 shallow lobes and functions as a landing pad for visiting insects. The lower interior of the corolla has abundant white hairs. At the base of the calyx, there are a few green bracts that resemble the sepals. Flower color is creamy white, sometimes tinged pink. Flowers bloom from the bottom of the spike up.

Each flower is replaced by an ovoid seed capsule containing several seeds that are flattened and broadly winged; these seeds can be blown about by the wind and probably float on water.

Chelone lyonii is the tallest of turtlehead species at 3-4 feet in height. It bears clusters of purplish-pink flowers from August through October.

Chelone obliqua flowers look similar to those of pink turtlehead, but they tend to be slightly darker and are borne on plants that remain under 2 feet.