Trending
You are at:Home»Herbs and Spices»Facts and Benefits of Baneberry 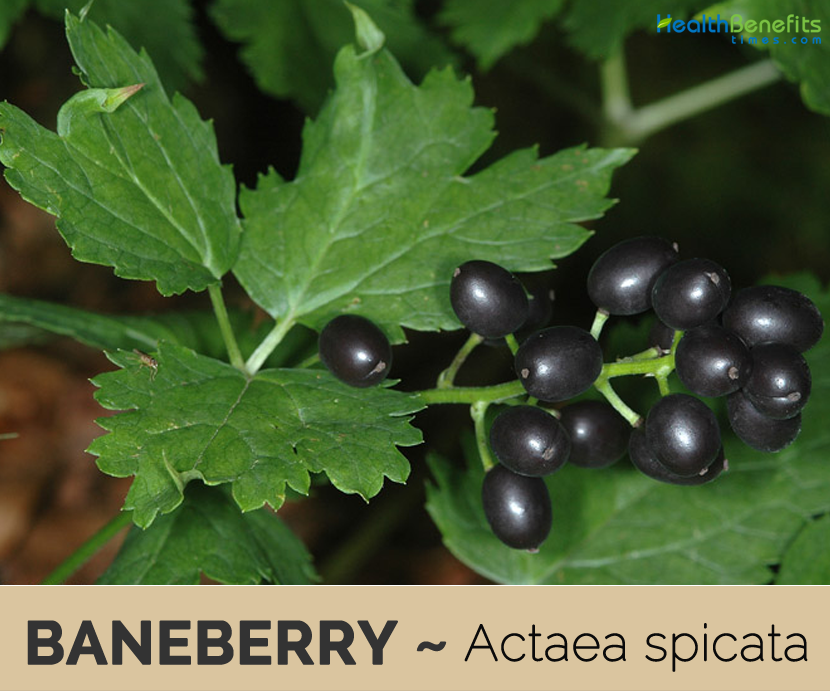 Actaea spicata commonly known as Baneberry, Eurasian Baneberry, Herb Christopher, Bugbane, Toadroot and Grapewort is a species of flowering plant belonging to the Buttercup family, but unlike other members of the species, it has berry-like fruit.  The plant is native to Europe and Western Asia. The name Actaea comes from the Greek ‘acte’ for elder because the leaves and the egg-shaped berries look like the elder. The dreadful taste, however, means that the berries are not eaten in error. Toads seem to be attracted by the smell of the Baneberry, which causes it also to be termed Toad root, the name arising perhaps also from its preference for the damp shady situations in which the toad is found. It is also called Bugbane, because of its offensive smell, which is said to drive away vermin. It is an extremely poisonous plant. Despite this, it was used in the past in herbal medicines. It is also grown as an ornamental plant in gardens.

Baneberry is a poisonous herbaceous, perennial, flowering plant that grows about 0.5 m (1ft 8in)tall and spread 0.3 m (1ft) wide. The plant is found growing in moist shady areas, mostly in deciduous forests but also in mixed coniferous forests, open pine or spruce woodlands, swales, stream banks and swamps. The plants prefer humus-rich damp, stony woods. Plant has black, creeping root-stock that is short, oblique, woody and erects shiny stems, growing 1 to 2 feet high, which are triangular and either not branched, angularly curved from nodes, base with 3–4 scales. The whole plant is dark green and glabrous (without hairs), or only very slightly downy.

The flowers are white, with 4-6 petaloid sepals, and are produced in an erect raceme about 10 cm long. Flowering normally occurs from May to June. The fruit is egg-shaped berries, black and shining, 10-11 mm long and 8 mm diameter, many-seeded and very poisonous, well justifying the popular name of Baneberry. Seeds start ripening from Jul to August.

All parts of baneberry contain poisonous compounds and sensitive people can get symptoms just from touching the stems. The berries contain cardiogenic toxins which can have an immediate sedative effect on human cardiac muscle tissue, and are the most poisonous part of the plant. Ingestion of the berries can lead to cardiac arrest and death. The berries are harmless to birds, the plants’ primary seed dispersers. The plant is of an acrid, poisonous nature throughout, and though the root has been used in some nervous cases, and is said to be a remedy for catarrh, it must be administered with great caution.

There are two varieties of Baneberry:

Traditional Medicinal Use of Baneberry