Trending
You are at:Home»Vegetables»Facts about Wild cucumber 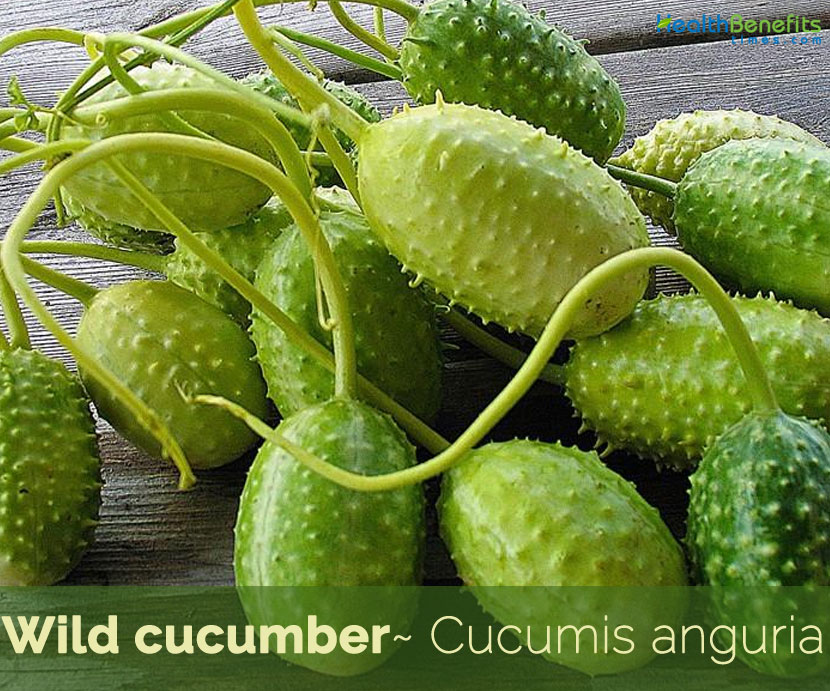 The fruits and leaves of wild cucumber are consumed as boiled, fried, stewed, pickled and also used as fresh in salads and hamburgers. Additionally, the fruits, roots and seeds are used for traditional medicine to treat stomach ache, jaundice, hemorrhoids and preventing stone formation in the kidney. Since there is a growing worldwide demand for pickled gherkins, many food companies have started to explore opportunities for producing gherkins. The plant is harvested from the wild, or more commonly cultivated, for its edible fruits and leaves and also for various medicinal uses. The fruits are often traded.

Wild cucumber is a thinly stemmed, annual monoecious herbaceous vine that grows about 3 meters long. The plant is found growing in semi-deciduous and deciduous woodland, tree and shrub savanna, grassland, semi-desert, wooded grassland, on Kalahari sand, abandoned cultivated land and near cattle kraals. The plant requires deep and well-drained soils such as white, red or brown sand, grey or red loam and gravelly or stony soil. It is also found on brackish soils with underlying limestone formations as well as blackish clay soil and grow well on seasonally moist alluvial soil. Trailing or scandent stems with bristle-like hairs grows up to 2 meters long, either scrambling over the ground or climbing into other plants, where they support themselves by means of tendrils.

Stems is annual, up to more than 2 m long, finely ridged, roughly whitish hairy, usually prostrate, but will climb on bushes and other support.

The leaves are alternate and variable and tendrils are almost always present It is 4–8 cm long, 4–7 cm wide, deeply 5-lobed, the central lobe often 3-lobed, bristly, margins toothed. The leaves are large and lobed, resembling maple leaves in shape. Petiole is 2–6 cm long with spreading hairs.

Wild cucumbers have both male and female flowers. The male flowers sprout in round clusters about (10-20 cm) across with individual flowers (1 cm) wide. They have six thin petals. A single female flower is found at the base of a male flower stalk. The flowers are mostly unisexual and white or yellow in color they occur on the same plant (monoecious) or on separate plants (dioecious). Male flowers are fascicled, very small, and much shorter than the hispid petiole, whereas female flowers have longer peduncles. Flowering normally takes place from July to September.

Fertile flowers are followed by an ellipsoid to sub globose berry with one to many, often flattened seeds. It is 3–5 cm long, 20–30 mm diam. on a stalk 2.5–21 cm long. Fruits are initially grayish green with green stripes, ripening to yellowish as they matures and turn brown when dry before the fruit burst for seed collection. The inner flesh of the fruit is a white-green, and is crisp, crunchy texture. It has a mild taste, likened to a cross between a cucumber and a zucchini, with sweet and sour, slightly citrusy notes. Each fruit is filled with numerous tiny, tart edible seeds. As the fruit matures, it develops a strong tart and bitter taste while the outer flesh turns tough, and develops long, rubbery spines that eventually turn into spikes. The fruits of this species, often small, prickly and striped, were pickled and preserved in Old Cape kitchens.

Seeds are ellipsoid, 4.5-5.2 mm long, 2-2.3 mm wide and 0.9-1.1 mm thick, compressed with rounded margins, smooth. The seeds are green in color when unripe and turn red when ripe, and also turn brown when they are ready for collection. 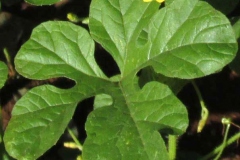 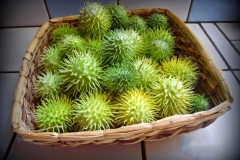 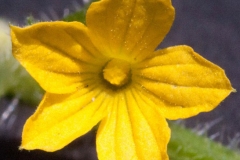 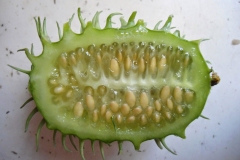 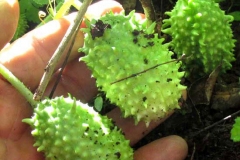 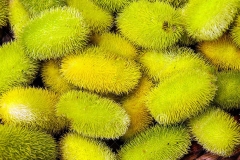 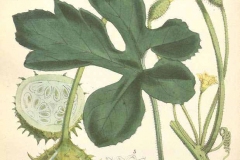 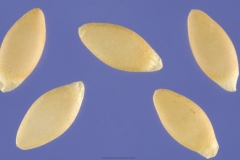 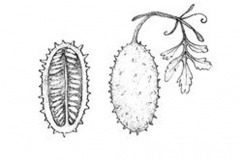 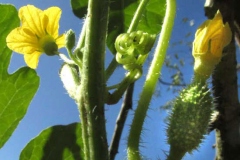 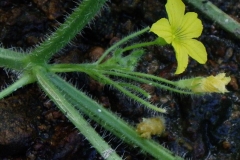 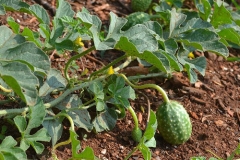 Cucumis anguria is of African origin and it occurs wild in East and southern Africa. It has bitter fruits, but occasionally non-bitter types occur. Seeds were taken to the Americas with the slave trade, where the cultivated West Indian gherkin was developed. This edible, non-bitter type spread through the Caribbean, parts of Latin America and the southern United States. It can now be found in a semi-wild state as an escape from cultivation, and in some cases it appears to be an element of the indigenous flora. It is an invasive weed in parts of North America and in Australia, and a serious weed in peanut fields of the southern United States. The non-bitter edible form was reintroduced into Africa (e.g. Cape Verde, Senegal, Sierra Leone, DR Congo, Réunion, Madagascar, South Africa), where it is grown for its fruits. In Madagascar Cucumis anguria is probably not originally wild, but naturalized because it is localized around human habitations.