Trending
You are at:Home»Herbs and Spices»Health benefits of Wild Indigo 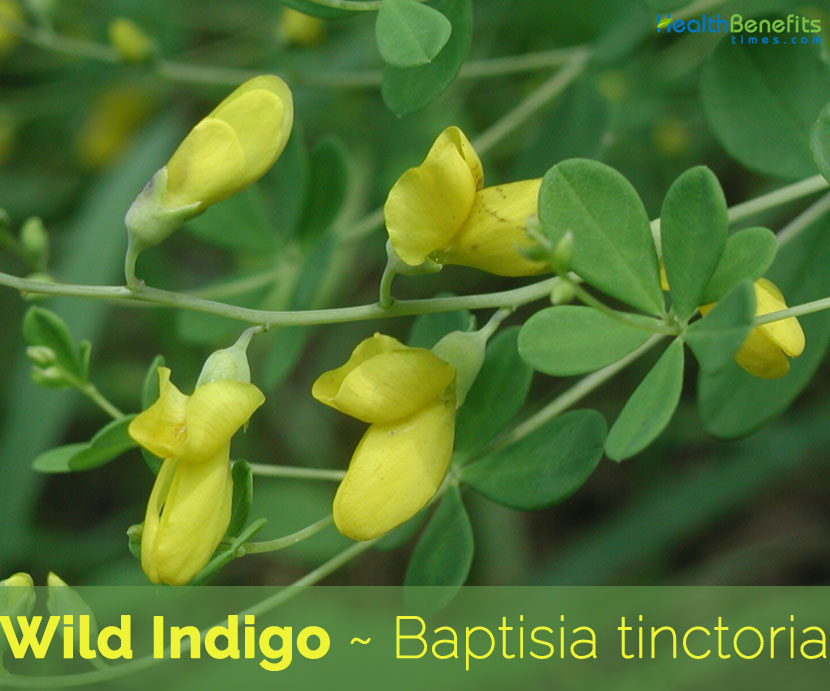 Baptisia tinctoria also known as yellow false indigo, wild indigo is an herbaceous perennial plant in the family Fabaceae. The plant is native mainly along the southern Canada and Eastern Side of the United States from Maine to Minnesota and all the way south to Florida, but typically no further than southeast of Louisiana. As it is rare in some parts of its range, it is protected by some state authorities: in Kentucky it is threatened; in Maine it is considered endangered.  Few of the popular common names of the plant are Wild indigo, yellow wild indigo, dyer‘s baptisia, false indigo, horsefly weed, indigo broom, indigo weed, rattle bush, rattle weed, yellow broom, clover bloom, Baptisia, yellow indigo, American indigo, broom-clover, shoofly, blue false indigo, blue wild indigo, indigo carmine and wild indigo root.

The common name of Horsefly weed comes from the old folk use of tying bunches of the plant to the harness of horses where it was said to repel horseflies. The genus name Baptisia is from the Greek word bapto, meaning ‘to dye’ as a dye can be made from the plant but it is inferior. The species name tinctoria, comes from Latin word which means ‘used in dying’.

Wild Indigo is a small, erect, much-branched, upright herbaceous perennial plant that grows about 2 to 3 feet tall. The plant is found growing in dry fields, well drained fields and borders, clearings and on the edges of woodlands, sparse deciduous and conifer forests, deforested areas and roadsides, dry meadows, oak barrens, Pine Barrens and open woods.  The plant prefers a deep, rich, dry to medium, well-drained neutral to slightly acid soil in full sun. It also grows freely in a loamy soil. The plant has a short root stock which is almost woody. Exterior is grey-brown whereas interior is yellowish and filled with numerous light colored fiber. The plant has smooth, glabrous, round, branched, erect stems. Barks are rather scaly or dotted with wart-like outgrowths, and are brown in color.

The leaves are tripartite and alternate, with oblanceolate stalk less (or with very minute stalks) 1 inch long leaflets that have bluntly pointed tips and smooth margins, and a gray-green color on the upper side, the entire leaf on a short stalk. The leaf underside is paler in color, showing a fine vein network between the lateral veins. There is a pair of small stipules at the base of the leaf stalk. Leaves appear about one month before the flowers. Leaves turn black upon drying.

The inflorescence is a loosely constructed terminal raceme of a few flowers at the top of stems above the leaves. Each plant can have numerous racemes. Flowers are perfect, to 1/2 inch long (smaller than other Baptisias) and are on short stalks with corollas in bright yellow, but like most Baptisias, there can be significant variation in color. Green calyx is tubular with 5 pointed lobes while the corolla forms a pea-type flower consisting of 5 petals with the large banner petal turned upward with a notch at the center, and the sides reflexed backward. There are two lateral petals projecting forward which enclose the two keel petals that are usually of a lighter shade, which in turn, house the reproductive parts, which include 10 stamens with yellow anthers and a single style.

Fertile flowers produce a small ellipsoid shaped inflated seed pod about 3/4 inch long, with a strong ridge line, and with the calyx firmly attached to the flower stalk at one end, but separated on the stalk from the pod itself, and the remains of the style at the other. The pod is green at first then turning black at maturity. The pod contains a number of brown kidney shaped seeds which are loose in the pod when mature (causing a rattle – hence one of the alternate names of Rattleweed). The pod splits open along its ridge line at maturity to release the seeds by wind or bird dispersion. As the stems and racemes become somewhat woody, pods frequently over-winter and provide winter interest. Seeds can be germinated in the spring after cold storage and stratification, but not all will be viable.

Baptisia comes from the Greek word for dye and tinctoria comes from the Latin word for dye, all of which slightly redundantly gets the point across that this is a dye plant which was used by early Americans as a substitute, although an inferior one, for true indigo (genus Indigofera) in making dyes. Wild Indigo was listed in the US Pharmacopoeia from 1831 to 1842 and in the National Formulary from 1916 to 1936.Flowers give way to small inflated seed pods which turn black when ripe and have some ornamental interest. Seeds rattle around in the pods when ripe, thus giving rise to the sometimes common name of rattle weed for this species. 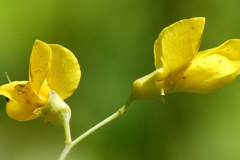 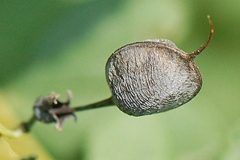 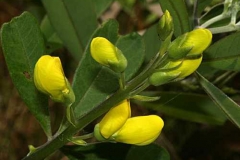 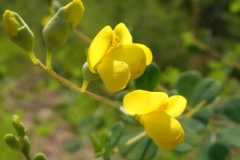 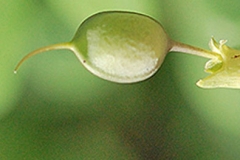 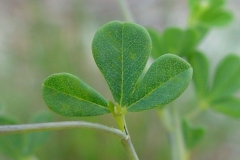 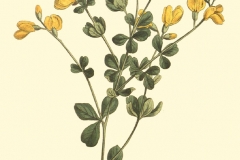 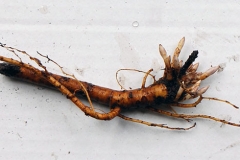 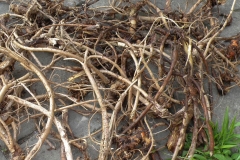 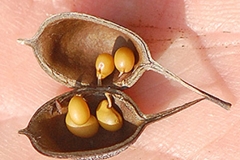 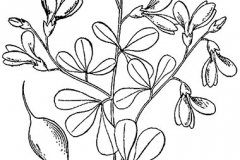 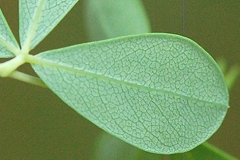 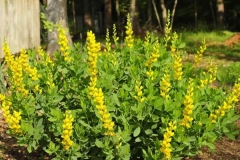 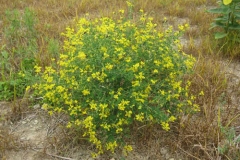 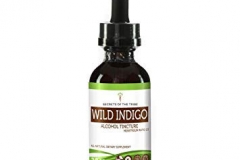 Listed below are few of the popular health benefits of using Wild Indigo herb:

The major effects of Wild Indigo are related to the immune system, mainly when it comes to the treatment of infections. It has long been trusted on to clear up infections of the mouth, gums, and throat, as the powerful concentration of antioxidant and anti-inflammatory components is able to quickly ease discomfort and eliminate any dangerous pathogens or bacteria present in those bodily systems. Research has also shown that the immune-modulatory effects of Wild Indigo on the propagation of white blood cells can help in strengthening your immune system, which is a very exciting development in alternative medicine.(1), (2)

If you have focused pain in any area of your body, you can topically apply Wild Indigo and the analgesic properties of the herb will take over.  In traditional medicine, this was commonly done to the nipples for women with sensitivity in that area. This can also be used for those with wounds, post-surgery pain, and arthritic symptoms.(3)

If you are suffering from a sore throat or an inflamed respiratory system, which often happens with conditions like bronchitis or the flu, it can act as an expectorant, eliminating mucus and phlegm that can build up in your respiratory tracts and catch bacteria and pathogens.  The anti-inflammatory effects of Wild Indigo can also help to reduce irritation in the tracts and speed the healing process following a respiratory illness.(4)

Though skin ulcers are not the most common form of this condition, they do occur and need to be treated. Topical application of Wild Indigo herb can help to alleviate this condition and treat the underlying cause as well. In terms of other skin conditions, such as irritation, age spots, wrinkles, and blemishes, Wild Indigo can also be used to soothe inflammation.(5)

Those people who have suffered from an ulcer know that it can be extremely painful and difficult to treat, so a natural solution is obviously quite valuable. In traditional medicine, Wild Indigo was frequently used to treat gastric ulcers, due to its anti-inflammatory abilities and specific antioxidant effects that caused a reduction in the size of ulcers and helped to prevent their further development. (6)

Although this may seem to fall under the category of the immune system, the powerful effects that Wild Indigo has been shown to have on the common cold and influenza deserve its own classification.  If you have a weak immune system and are frequently ill, then adding Wild Indigo herbal supplementation may be a wise choice. (7)

Many people have poor oral health but don’t even know about it, as it is frequently only evidenced by bad breath, minor pain, or some bleeding while brushing. Wild Indigo is particularly effective at treating oral conditions like gingivitis and infections of the teeth and gums.

It can be difficult to treat certain organ systems of the body, and Wild Indigo cannot always do it alone. This herb is commonly combined with other herbal substances, such as pokeroot and cleaver, for issues of the lymphatic system, such as inflamed lymph nodes, which is often the sign of an infection. Again, the naturally antiseptic and antibacterial nature of Wild Indigo can help prevent these small issues from progressing into something more serious.