Trending
You are at:Home»Herbs and Spices»Health benefits of Slippery Elm 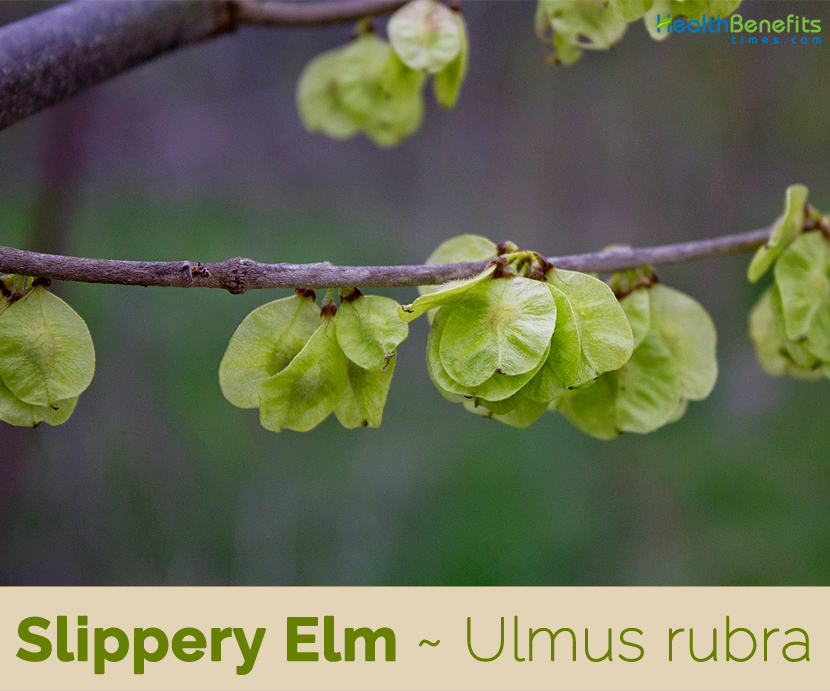 Slippery elm scientifically known as Ulmus rubra is actually a species of elm belonging to Ulmaceae (Elm family). The plant is native to eastern North America, ranging from southeast North Dakota, east to Maine and southern Quebec, south to northernmost Florida, and west to eastern Texas, where it thrives in moist uplands, although it will also grow in dry, intermediate soils. Other Popular common names of the plant are Red elm, slippery elm, grey elm, soft elm, moose elm, Indian elm, sweet elm, American elm, ulmi rubrae cortex, ulmaceae, winged elm and ulmus fulva michaux. The tree was first named as part of Ulmus americana in 1753, but identified as a separate species, Ulmus rubra, in 1793 by Pennsylvania botanist Gotthilf Muhlenberg.  Its name refers to the slippery feeling of the inner bark when it is chewed or mixed with water. The inner bark (not the whole bark) has several healing and medicinal properties and is used as medicine.

Slippery elm is a medium-sized, deciduous tree that grows about 60 to 70 feet (18-21 m) on average sites and 135 feet (41 m) on the best sites. Trunks are up to 35 inches diameter at breast height. The plant is found growing in rich mesic woodlands, floodplain woodlands, the lower slopes of wooded bluffs, rocky upland woodlands, shaded gravelly seeps, riverbanks, edges of limestone glades, thickets, and disturbed areas along railroads and roadways. The plants prefer wet and fertile soil nearby to water courses, though it can also survive in drier areas. The plant has shallow but wide spreading root. Trunk bark is mostly gray, consisting of narrow flat ridges and shallow furrows; inner bark is more reddish brown, as exposed by some of the furrows. Bark of branches and older twigs are more smooth and gray to reddish brown, while the bark of young twigs is reddish brown and hairy. Branches are ascending to widely spreading, becoming subdivided into numerous twigs. Young twigs are hairy and initially green, turning gray to gray-brown. Buds are up to ¼ inch long, elliptic, hairy at the tip, with hairy, dark brown to blackish scales. Flower buds are larger, round, densely covered in rusty-colored hairs.

Simple, alternate leaves are 4-6 inch long and 2-3 inch wide; they are ovate to slightly obovate and doubly serrate along their margins. It is abruptly tapered to a pointed tip, rounded and asymmetrical at the base, on a short, hairy stalk. Leaf venation is pinnate with a central vein and about 12-15 parallel lateral veins. At least 4 lateral veins on each side of the central vein are forked. The upper leaf surface is dull medium green and rough-textured from stiff minute hairs. The lower leaf surface is whitish green and more or less covered with short pubescence. The white ribs of the veins are very prominent along the lower surface. The petioles are about ¼-½ inch long; light green, and short-pubescent. The leaves are arranged along each twig in two ranks. Edges are double-toothed with roughly half the veins forking towards the tip (easily seen on the underside). The deciduous leaves usually become dull yellow during the fall.

The greenish red flowers of Slippery Elm are unisexual or perfect (usually the latter); they are arranged in dense clusters of 5-20 flowers up to 1 inch across on short pedicels about 1/8 inch (3 mm.) long. Male, female, and perfect flowers have a short tubular calyx with 5-9 oblong lobes. The calyx is green and hairy; its lobes are erect. Male flowers have 5-9 stamens with reddish anthers, while female flowers have a pistil with a pair of stigmata that are plumose and pinkish red; perfect flowers have both stamens and a pistil. The blooming period occurs from early to mid-spring (March to May) before the leaves develop; the flowers are wind-pollinated.

Fertile female or perfect flowers are replaced by samaras about ½-¾ inch across. Individual samaras are ovate to orbicular and flattened, consisting of a central seed body that is surrounded by a wide membranous wing. The membranous wings of the samaras are glabrous, while the central seed bodies are hairy. Each samara has a cleft tip that is only slightly notched. The samaras are initially green turning to tan at maturity; they are distributed by the wind during late spring as the leaves develop. 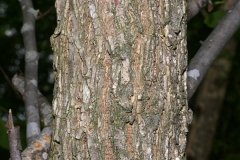 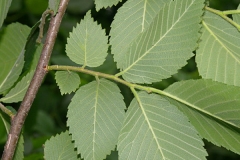 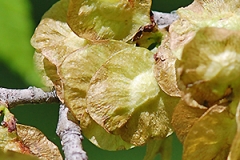 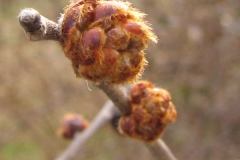 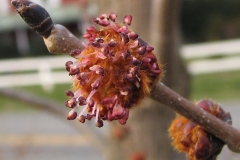 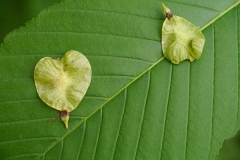 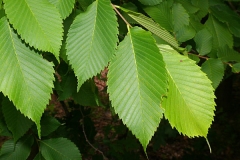 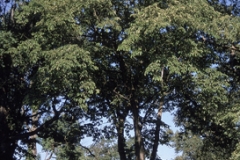 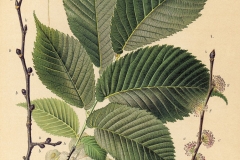 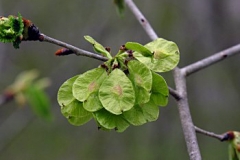 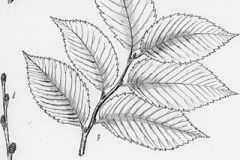 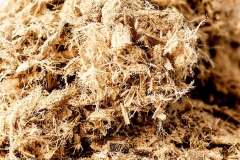 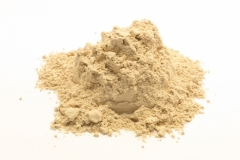 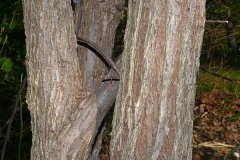 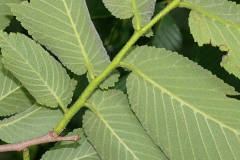 Good diet, a good workout regime, and a healthy outlook towards life-all these combined can help you live a meaningful life. Various herbs help to make you healthier still! Slippery elm too offers a variety of health benefits, including

Slippery elm is quite beneficial for better digestive health. Mucilage found in its bark is ideal for soothing the digestive tract and eliminating inflammation, mostly the type that causes Irritable Bowel Syndrome (IBS). There is also a significant amount of fibrous tissue found in the bark, which can help to bulk up the stool and eliminate issues like diarrhea. In general, it is a full-service gastrointestinal cleaner and has been used as such for thousands of years. (1)

If you have suffered from burns, have noticeable scars, or generally poor skin health, slippery elm can be a wonderful remedy. Antioxidants and unique vitamin mixture of this herbal salve can reduce the appearance of wrinkles, eliminate free radicals from the upper skin layers, and even heal age spots, additionally, giving a youthful look to the skin. Furthermore, it can help protect the skin from infections of various types, acting as the first line of defense for the body.(2)

When the balm or salve of slippery elm is applied to a pulled muscle, bruise, or other painful areas of the body, relief is rapid and effective. Antioxidant and analgesic components of slippery elm can quickly soothe the topical pain. (3)

Although this is noticeably a highly controversial application, slippery elm is an important component in Essiac, a common herbal treatment for various types of cancer. While research into the antioxidant effects of slippery elm has been widely conducted, the conclusions are still somewhat uncertain, so this possible health benefit should be considered in combination with medical treatment.(4)

Slippery elm can also be used as a salve for oral health. If you feel a tooth infection coming on, or have pain in your gums, you can use some slippery elm to the cap of the tooth and the surrounding gums to prevent infection and relieve pain through the anti-inflammatory properties of the herb.(5)

6. Soothing a Cough and Sore Throat

Slippery elm consists of mucilage, a sticky mixture of sugars that can’t be broken down by the human digestive tract. Mucilage coats the throat, so it’s no surprise that slippery elm is found commercially in many brands of throat lozenges.

Slippery elm is supposed to be an antitussive, meaning it’s great for coughs and for symptoms of other upper respiratory ailments like bronchitis or asthma. Again, there is no research to support or refute these claims. Research examining the bark’s use in people with laryngitis or throat inflammation and voice problems has also shown some potential soothing effects.(6)

Slippery Elms can be used to obtain relief from the symptoms of Ulcerative colitis. It can also reduce the risk of this disease. Ulcerative colitis is a prolonged condition that occurs due to the inflammation of the inner lining of the intestine. Though the exact cause of this condition is not known, it is supposed to occur due to the interplay of genetic, environmental, and immunological factors.

Slippery Elm can help to reduce the progress of this condition and also prevent its complications such as rectal carcinoma.

Slippery Elm is used to cure psoriasis, a condition where the skin becomes red, itchy and scaly. People experience inflammation in extreme cases. Use this herb in addition to your regular medication for faster relief.

9. Irritation of the Urinary Tract

Slippery elm is occasionally recommended to people who experience unexplained inflammation of the urinary tract, like those with interstitial cystitis. Slippery elm powder is supposed to soothe the lining of the urinary tract. Thus, it might help alleviate the painful irritating symptoms. Again, research is needed to either support or refute these claims.

Many women suffer from reoccurring vaginal infections, which are not only painful but are also uncomfortable. Infections in the vaginal area can be cured with the use of inner bark of slippery elm. Warning: Pregnant women should not use this product in any form.

Heartburn, considered by a burning sensation and pain in the stomach and chest, can also be reduced with slippery elm. Mucilage of slippery elm coats the esophagus and decreases the irritation and inflammation that occurs when stomach acid flows up the esophagus.  It is also effective at treating gastro esophageal reflux disease (GERD).

Slippery elm is supposed to be an antitussive, meaning it aids in treating upper respiratory ailments like asthma or bronchitis. Its anti-inflammatory nature helps thin the mucus that clogs the airways. It can help prevent the bronchial spasms related with asthma attacks. It also offers relief from coughing and tightening of the chest.

Slippery elm improves digestion, and this is why it also aids weight loss. It binds to substances in the intestines that the body does not need and slows their absorption into the body. Plus, its diuretic properties help reduce fluid retention and shed water weight.

In a research, participants were given freshly prepared, mostly vegan meals at breakfast, lunch and dinner. It was 1,200 to 1,400 calories for women and 1,600 to 1,800 calories for men on a daily basis. In this diet plan, slippery elm was also one of the main components, as it contains digestive enzymes to facilitate digestion.

During these three weeks, participants observed a major reduction in weight. Also, participants had reduced levels of low-density lipoproteins (LDL or the ‘bad’ cholesterol).