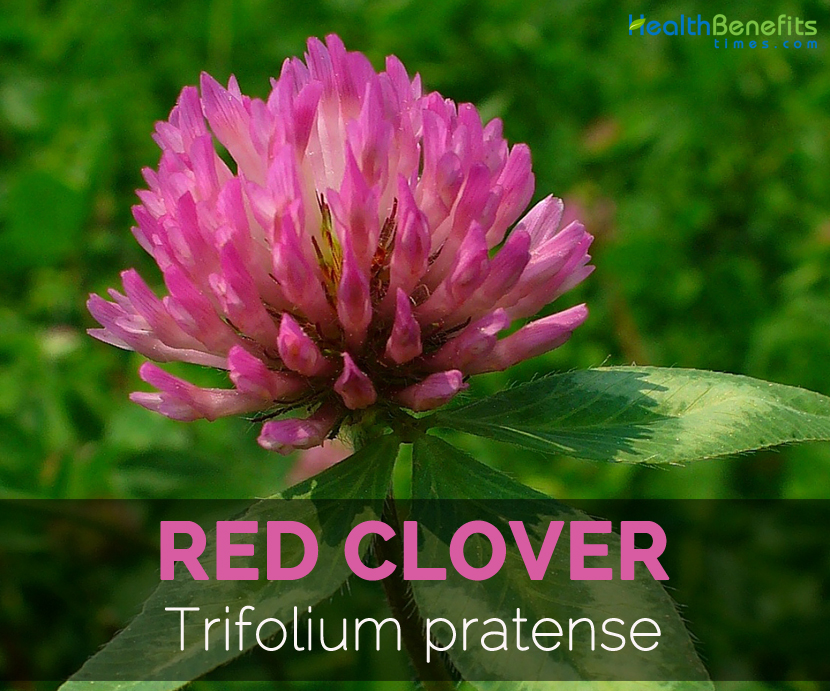 Trifolium pretense, commonly known as Red clover, is a perennial herbaceous flowering plant in the family Fabaceae. It grows satisfactorily in the cool climates and well drained soils. It is native to Europe, Western Asia and Northwest Africa but now have been naturalized and introduced in various parts of the world. Medium (double cut) and Mammoth (single cut) are the two varieties of Red clover. Other common names for this species are: Beebread, Chilean Clover, Mammoth Clover, Meadow Clover, Meadow Trefoil, Purple Clover, Red Clover and Sweet Kitty Clover. It could be found in dry or wet grasslands, meadows, field borders, forest margins, paths, pastures and roadsides. The flowers of Red clover are pollinated by the bumblebees than honey bees.

In 3rd and 4th centuries, Red clover was cultivated in Europe. It got introduced to USA in late 1600’s by European colonists. Red clover is considered as the oldest crops in the world which was grown since prehistoric times as forage. The flowers were used as the herbal healing. Ancient Romans, Greeks and Celts of prechristian worship it. Early Christians consider Red clover as the miniature for the Ireland’s symbol, shamrock and clubs in playing cards. Red clover was believed as a charm adjacent to witchcraft. Red clover represents industry in the Victorian times.

In early days, clover cordial was considered as the popular drink in San Francisco. The clover was consumed by the native Americans in various ways. It was consumed fresh before the flowering or cooked by making moisten layers of plant in a stone oven. It was boiled with grass, dandelions or pigweed by Apaches. There is a belief that Red clover has an ability to treat bites of insects and poisonous snakes. The plant was boiled in the water and the bitten areas were washed with it and crushed leaves were laid on the affected area. Ozarks people used the Red clover tea made with blossoms to cure the whooping, dry or irritable coughs.

Trifolium pretense is an herbaceous, pubescent-glabrescent and perennial plant which grows up to 91 cm high. Leaves are alternate, trifoliate, green, ovate-elliptic or obovate, 15-30 mm long and 8-15 mm broad. The stems are erect to ascending and 6-24 inches in height. Flowers are globose or ovoid, pink, purple or red in color and 2 ½ to 4 cm in diameter. The flowers turn to the pod which is ovoid or egg shaped. The seeds are one or two seeds which are ovoid, kidney shaped and yellowish-brown. The plant flowers April to November.

The research shows that the isoflavones found in Red clover helps to treat the health ailments such as menopause, hot flashes, osteoporosis and cardiovascular health.The anti-inflammatory properties found in the flowers and leaves helps to prepare the powerful extract from red clover. The consumption in medicinal amounts is safe but the excessive consumption is considered as toxic. The greens are loaded with various nutrition. The detail description of Red clover is as follows:

The red clover include some properties has the ability to lower inflammation in the body especially in cardiovascular system. The study shows that the tea made from red clover helps to reduce the tension of blood vessels and arteries by reducing the blood pressure. It helps to prevent the cardiovascular ailments and coronary heart disease. (1)

Red clover possesses isoflavones which helps to maintain the level of estrogen and balance the hormonal shifts and also prevents the mood swings. It also helps to reduce the breast pain. It is helpful for the women with PMS and menopause which can cause the unpredictable and harmful change in the hormone level. The study shows that the Red clover extract reduced the hot flashes in the menopausal women. (3)

The cholesterol levels increases the risk of strokes, heart attacks and atherosclerosis. The research shows that Red clover could reduce the LDL cholesterol in the body. Additionally, Red clover possess coumarins which helps the smooth flow of blood and promotes circulation by preventing cardiovascular distress and high blood pressure. (5)

Red clover acts as a diuretic which helps to detoxify the body and eliminates the excess salts and toxins. Red clover increases urination and releases toxins, excess water and fat from the body.  (6)

The research shows that Red clover prevents the heart disease but does not have any strong evidence. The isoflavones found in Red clover helps to raise the HDL cholesterol level in the post and premenopausal women. The study shows that the intake of red clover by the menopausal women had flexible and strong arteries which help to prevent the heart disease. It might possess a blood thinning properties which assist in the formation of blood clots. It promotes the flow of blood.

During menopause, the levels of estrogen drop which increases the chances of osteoporosis development. The studies show that the Red clover extract has isoflavones which prevents bone loss and enhance the mineral density of bones. But more research is required regarding this subject.