Trending
You are at:Home»Herbs and Spices»Health benefits of Great mullein 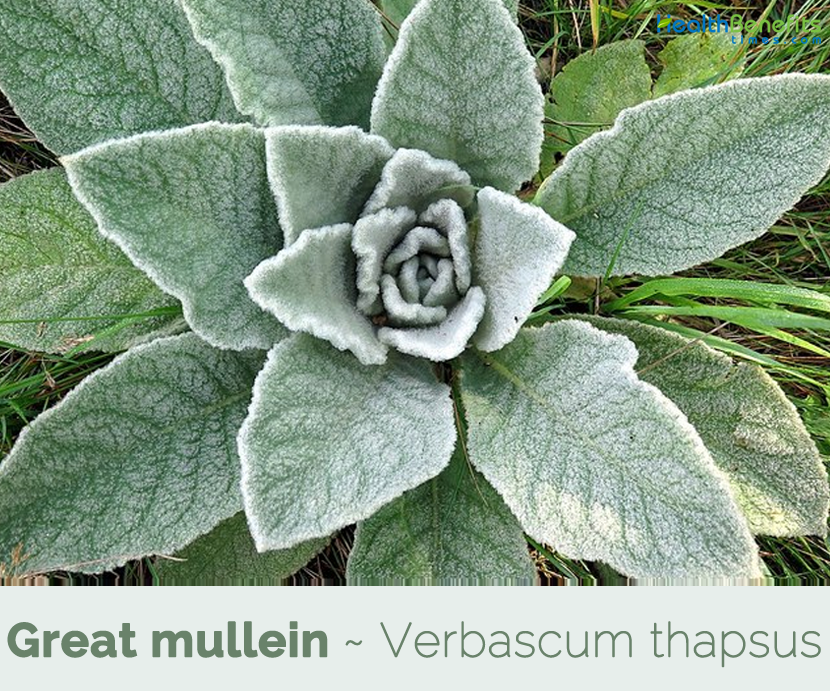 It’s not related to lungwort, nor to the plant normally called neither goldenrod nor rose root, all of which belong to different botanical families. The genus name Verbascum was derived from the old Latin name for the species, barbascum, which means ‘bearded plant’. Thapsus was a city in what is now Tunisia. The common name, mullein, is derived from the Latin word mollis, which means ‘smooth or with soft hairs’. It is widely used for herbal remedies; the entire mullein plant can be used in a multitude of ways in remedies for respiratory health, lymphatic support, and musculoskeletal complaints. Mullein remedies are especially recommended for coughs and related problems, but also used in topical applications against a variety of skin problems. The plant has also been used to make dyes and torches.

Great mullein is a hairy, densely woolly, sturdy dicotyledonous biennial plant that grows more than 7 feet (2 m) tall.  The plant is found growing abundant on dry, rocky hillsides, disturbed areas, open woodland, fence rows, old fields, pastures, limestone glades, rocky slopes and clay banks, pastures and fallow fields, areas along railroads and roadsides, vacant lots, and dry waste areas. The plant prefers dry sandy soil, but can be found in a variety of well-drained soils in meadows and forest gaps. The plant can tolerates a wide range of soil conditions, including poor soils, but must have good drainage. The plant has small and spindly, stout taproot that runs deep into the ground. It is gray-white in color with an earthy mineral flavor.

During its first year, it forms a low-growing rosette from a tap root. It has a dense yellow to white tomentose (stellate or dendritic) pubescence on the bluish grey-green leaves. Blades are obovate to oblanceolate, 8-50 cm long and 2.5-14 cm wide, with margins entire to shallowly crenate.

In its second year, it produces an erect flowering stem 30-200 cm tall. The lower stem leaves are petiolate. Leaf blades are oblanceolate-oblong to 15 cm long and 6 cm wide with crenate margins. Other stem leaves decrease in size up the stem, with the upper stem leaves oblanceolate, sessile, and decurrent into wings on the stem.

The central stem of the mullein plant ends in a dense spike of pale yellow flowers that generally measure anywhere from 5 to 60 cm (2inches to 2 feet) long. Each flower is about 2 cm (¾ inches) across and consists of five pale petals, five hairy green sepals, five stamens, and a pistil. The three upper stamens are covered with white or yellow hairs, while the two lower stamens are hairless. Flowering period usually occurs during the summer and lasts about six weeks. Only a few flowers are in bloom at any one given time. All parts of the plants are covered with star-shaped trichomes. This cover is particularly thick on the leaves, giving them a silvery appearance.

Each flower is replaced by hairy, egg-shaped, two-celled capsules. Capsules are 6 to 10 mm long, split at maturity, and contain numerous seeds. The rectangular-oblong seeds have fine wavy ridges and tiny pits across the surface. While the foliage withers away, the central stalk and its seed capsules turn brown and continue through the winter. The seeds are small enough to be carried aloft by the gusts of wind that shake the central stalk. The rod-like spike of fruits often persists through the winter.

Great Mullein is a versatile herb; it can be applied, drunk, smoked or inhaled for medicinal purposes.  The mullein leaf and the flowers of the plant are used in tinctures, syrups, oils, and even used to gargle. Mullein oil can cure ear pain and is good for curing eczema; hemorrhoids and wounds. Mullein tea is good for stopping nonstop coughing. Listed below are few of the health benefits of great Mullein

Drinking Mullein tea can help you deal with a number of digestive conditions and problems. It can provide relief to those suffering from diarrhea and constipation.  It also helps cope with bowel related problems and help your body eliminate toxins easily.(1)

Mullein leaf extract was used as a treatment for tuberculosis in Europe as early as the 16th century. Research in the 18th century found that mullein relieved the symptoms of several tuberculosis patients at St. Vincent’s hospital in Birmingham, England. It was extensively believed that if mullein was used in initial stages of the disease, it could bring about a full recovery.

Today, scientific experiments and medical studies have shown that mullein has expectorant and anti-bacterial properties, both of which are essential for treating respiratory disorder.(2), (3)

3. Treatment of cold and flu

As mentioned earlier, mullein leaf extract has expectorant and anti-bacterial properties, which makes mullein tea a wonderful home remedy for flu or a cold with lots of congestion. According to medical researchers, saponins present in mullein give it its expectorant properties. It also helps to reduce the amount of mucus produced in body and decreases congestion.(4), (5)

There are numerous historic references on using mullein leaf externally on painful and rheumatic joints.

Recently, mullein root has become popularized for back pain. Herbalist states, “Mullein root on its own, though, is also markedly effective. Prepared either as an infusion or taken in small doses as a tincture. Normally take about seven drops of tincture, stretch out a bit, and the kink will disappears and you feel perfectly aligned. While the occasions when this has worked are too numerous to recount, it doesn’t always work…just most of the time. (6)

It has been used to treat tuberculosis as it prevents growth of mycobacterium, the bacteria which are the culprit behind this disease. Medical researchers have found that verbascoside works exceptionally well against Staph infections.(7)

Insomnia is one of the popular growing issues amongst men and women belonging to various age groups. Instead of popping those OTC pills to doze off, you can option to Mullein tea to battle insomniac nights. It acts as a natural sedative and soothes your nerves. It is considered quite beneficial for overcoming sleeping problems.

Apart from Mullein tea, you can also use Mullein oil to get relief from a variety of skin conditions. It can work wonders on blisters, wounds and small cuts. In fact, you can apply Mullein leaf tea on sores and wounds externally too. It has a calming effect on the skin. Mullein combined with olive oil, can also be applied in such conditions for quick relief.

Having Mullein tea can help you combat a number of respiratory ailments and conditions like cold, cough and bronchitis. It can also offer relief from sore throats. Its anti-bacterial properties help cope with inflammation and infection.

Besides, it helps discard excess mucus from the throat and nasal passages. You may offer this tea to kids suffering from cold without worrying about any side effects. Apart from drinking the tea, you can also try gargling it two times a day to relieve sore throats.

Mullein tea is quite beneficial for people afflicted with asthma. You can drink the tea, or can even inhale the vapor of the plant leaves in hot water. It can also be beneficial when you are suffering from nasal congestion. You can even use the dried leaves of the herb to make herbal and harmless cigarettes!

According to various scientific researches, oil extracted from the flowers of mullein is rich in powerful anti-bacterial and anti-inflammatory properties. Therefore, it could be efficiently used as a natural cure for ear infections. It can also be used to ease the pain experienced in the ears due to sinus blocks.

Mullein leaf has long been adored for soothing the lungs and suppressing coughs. It is a mild relaxant to the lungs and also a mild demulcent. It calms inflammation and dryness – often the causes of irritation for people with smoke exposure. Additionally mullein flowers can have an added benefit to these dry irritated conditions.

Mullein leaf is commonly used by herbalists to aid those who want to quit smoking. It is frequently recommended to take the tea or tincture internally to support the health of the lungs, while concurrently using it as a smoking herb to assist with the desire to smoke something.

While it sounds a bit counterintuitive, inhaling mullein smoke is a way to directly get mullein’s relaxant qualities to the lungs, to relax constrictions and aid in stopping a cough. This method can be overdone, but when you get it just right it can have dramatic and quick results.

13. Beneficial for the Bladder

In addition to back pain, mullein root is also used to address a variety of urinary incontinence issues, including stress incontinence, pregnancy incontinence, menopausal incontinence, and childhood incontinence. It can also be used to assist those with interstitial cystitis and benign prostatic hyperplasia (BPH, enlarged prostate).

Mullein flower extract, being rich in anti-inflammatory and analgesic properties, is used in alternative medicines as a cure for migraines and headaches. It can also be used to heal the headaches arising from ear oppression.

Mullein is well-known for its wonderful anti-spasmodic properties that make it a possible natural cure for stomach cramps induced by gastric upset as well as menstrual cramps. Its anti-inflammatory and analgesic properties ease the pain related with these conditions.

If you want to make your own mullein tea, you will need either fresh or dried mullein leaves or flowers. If you have fresh leaves and flowers, lay them on a cookie sheet and cover them with cheesecloth. Be sure they are not exposed to moisture for 2-3 days until they are completely dry. Then, you are ready to brew some tea. Making tea with fresh mullein leaves is also possible, but will require more steeping time.

Brew the tea as described above for a calming, naturally sweet expectorant infusion that will help ease even the most stubborn, wheezy coughs.

Prepare the tea according to directions given above to relieve symptoms of common cold. This formula works especially well for people who rapidly develop bronchial problems whenever they contract a simple cold.

Prepare the tea mixture as told before. This tea, enforced with a good diet, copious amounts of sugar-free liquids, aids the liver in filtering out toxins and cleansing the skin of impurities.

Side Effects of Mullein Leaf

The few not-so-fatal side effects of this herb are:

Some women and men have stated skin irritation after using Mullen extracts in tea and other forms. It could be an allergy. However, avoiding the extract can cure the skin irritation in such people.

Mullein leaves are fluffy and hairy. If they manage to get into throats, breathing issues can affect the users. This may happen when you make the tea and do not strain the mixture well. In some isolated cases, people taking the tea have reported difficulty inhaling and inflammation of the chest wall. However, medical intervention is not required in most instances.