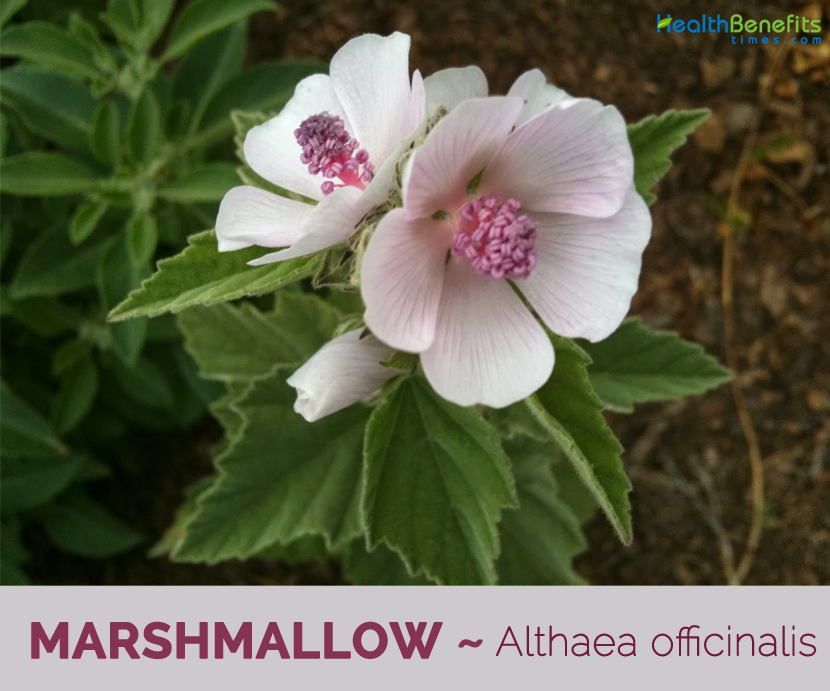 Marshmallow is actually the root of the marshmallow plant, which bears the scientific name Althaea officinalis. Apart from Marshmallow it is also known as althea, sweet weed, mallards, guimauve, mortification plant, schloss tea, wymote, Mallow, white mallow, common marshmallow, malvavisco, hatmi, iviscus, ghasul, khitmi, khatmah and usubeni-tati-aoi. The plant is native to Europe, western Asia, and North Africa. It is most commonly found in France, Germany, and some parts of the United States including mostly the northeastern states but also North Dakota, Nebraska, and Arkansas. The generic name, Althaea, is derived from the Greek “ἄλθειν” (to cure), from its healing properties. The name of the family, Malvaceae, is derived from the Greek “μαλακός” (soft; Latin “mollis”), from the special qualities of the mallows in softening and healing.

This is the plant that is processed to create the well-known marshmallows that you add to desserts and hot chocolate, but the root has been used for medicinal purposes for thousands of years. Dating back to ancient Egypt, marshmallow root has been cultivated and applied due to its impressive nutrient content, which includes starch, pectin, various antioxidants, organic acids and natural sugars. It is used as a medicinal plant and ornamental plant. A confection made from the root since ancient Egyptian time evolved into today’s marshmallow treat.

Marshmallow is a perennial herb that grows about 4-5 feet tall. The plant is found growing in upper margins of salt and brackish marshes, sides of ditches, and grassy banks near the sea and prefers to grow in salty soils. But now it thrives in moist, uncultivated ground. Roots are perennial, pale yellow, thick, long and tapering, very tough and pliant, whitish yellow outside, white and fibrous within. Stem is fleshy, erect, and upright about 3 to 4 feet (1.2 m) tall and unbranched with only a few lateral branches.

Leaves are attached by a short petiole and are ovate-cordate in shape, 2 to 3 inches long and about 1 1/4 inch wide, irregularly toothed at the edge, and thick. They are soft and velvety on both sides, due to a dense covering of stellate hairs.

Flowers are shaped like those of the common Mallow, but are smaller and of a pale color, and are either axillary, or in panicles, more often the latter. Five reddish white petals and are about 1 to 1 ½ inches in length. The pale pink flowers of the Marsh Mallow are in bloom during August and September and are followed by the flat, round fruit which are popularly called “cheeses”. Leaves, flowers, root and seed of the plants are used medicinally since ancient times. A confection made from the root since ancient Egyptian time evolved into today’s marshmallow treat.

Historically, Althaea officinalis was named by the Greeks who used it as their “official healer” with “Althos” meaning healer in Greek. In fact, Hippocrates used marshmallow for healing wounds. In the ancient times, Althaea officinalis was used for soothing coughs and colds along with irritated skin. This slimy plant was also eaten by the Romans and Egyptians as a vegetable on a daily basis. Also, the poor in Syria ate this plant to prevent starvation. Even in the bible marshmallow is stated as a plant used for food during times of famine. During the Renaissance period, Marshmallow was used for toothaches, stomach problems, coughs and colds, and skin irritations. Actually, Marshmallow was though thought have magical properties that gave psychic abilities for those that burned the plant and used it as incense. The common factor in all of its ancient uses was a soothing and healing property which surprisingly is the key feature today.

Around the world, marshmallow root is used to treat illnesses and disorders, including: dry coughs and colds. dry mouth and low saliva production. bacterial infections including bladder infections, urinary tract infections and respiratory infections. bronchitis and tonsillitis. joint pain caused by swelling. Listed below are few of the popular health benefits of Marshmallow

Marshmallow is one of the best cures for those suffering from pain, swelling and congestion related with cold and cough. Due to its antitussive properties and mucilage abilities marshmallow extract is added to many cough syrups and throat lozenges since it is one of the most effective natural cough remedies.

It helps to stop the urge to cough and facilitates with the process of producing more saliva, allowing it help reduce symptoms of dry mouth. It can safely be used by people with chronically low levels of salivary flow and chronic coughs.(1), (2), (3)

Burn wound could be really painful and is quite hard to treat. Marshmallow root is the wonderful option to accelerate the healing process. Marshmallow root consists of certain anti-bacterial properties that will prevent further infection and at the same time contains some excellent compounds to treat the wound effectively.

Antibacterial and antiviral properties of marshmallow root make it an important support tool for the immune system. This root is particularly well-known for its impact on the gut, which is where more than half of the immune function of the body occurs.(4)

Water retention is actually the reverse of dehydration when your body is getting too much water. By taking marshmallow root, some active compounds contained in this herb could help your body increasing the urination and at the same time balancing the fluid in your body.(5)

Since ancient time, marshmallow root has been used as home remedy for sore throat.  Marshmallow root contains certain compounds like antitussive that could help in decreasing the irritation occurs in the throat. That’s why, nowadays, marshmallow root is used as main ingredients in some medicines, in case you care with what you consume.

Some research has pointed out the blood sugar-lowering potential of marshmallow root. By regulating the release of glucose and insulin in the body, marshmallow root is able to protect diabetic patients from dangerous spikes and drops in blood sugar, and is an effective preventative measure for those at high risk of developing diabetes.(6)

7. Promotes the Production of ‘Good’ Cholesterol

Good cholesterol also known as HDL cholesterol is essential for your body to function properly. Anti-lipdemic and anti-ulcer properties of the marshmallow root helps in promoting the optimal production of HDL while reducing the production of LDL or the bad guy.

If you suffer from tonsillitis, bronchitis, a urinary tract or respiratory infection, take marshmallow root at the first sign of discomfort like swelling, burning and tenderness. It helps speed up the healing process and naturally kills bacteria that can cause various ailments.(7)

Kidney problems could be varying from problem with urination, kidney stone, inflamed kidney and many more. Research has shown that marshmallow root is considered as diuretic properties because it could help in increasing the secretion of urine. Extract marshmallow root is also able to treat urinary tract infection as well as prevent the development of kidney stones.

Skin disorders are not fatal but could be really annoying if you don’t treat it well and completely. The best thing about marshmallow root is that it almost has no side effect at all even for those with super sensitive skin.(8)

Digestive uses for marshmallow root include lowering or preventing heartburn, stomach ulcer symptoms, diarrhea and constipation. It coats the inside of the stomach and prevents acid from causing discomfort and “burning.”(9)

If you are in diet program, you can add marshmallow root to your diet because marshmallow root is able to make your stomach feel fuller in longer time. So, you could control your appetite in much better and easier way.(10)

If you are suffering from irritable bowel syndrome or arthritis, marshmallow root can soothe the swelling and reduce discomfort, helping to relieve the symptoms quickly. This reduction in inflammation is very important for the gut, where marshmallow root can prevent gastric ulcers, constipation, diarrhea, and acid reflux disease.(11)

Marshmallow root is quite beneficial for hair. You can use marshmallow root as natural hair conditioner to whatever the problem you have with your hair because it could treat dry, brittle and even limp hair.

Traditional uses and benefits of Marshmallow

Marshmallow root can be used in various forms, but the most popular ones are as a gargle, an ointment, an herbal supplement and a tea.

The most common form of marshmallow root is dried, chopped and shaved, which is ideal for brewing an herbal tea. You can add 2 teaspoons of marshmallow root to a cup of hot water, but not boiling and allow the dried root to steep for 4-5 minutes. Adding honey to this mixture is suggested, as the flavor can be slightly bitter. Do not consume more than 2-3 cups of this tea per day.

Cold infusion of marshmallow root can also be made by soaking the dried root in cold water for 5-10 minutes. You can then remove the marshmallow and use the remaining water to gargle. This can reduce inflammation in the throat and help the active ingredients in this herbal drink get absorbed by the body.

For most people, the simplest way to consume marshmallow root is through herbal supplements, which are widely available. Since marshmallow root’s potential benefits were recognized, it has become a common fixture, in varying strengths and potencies, in natural health food stores and herbalists.

The dried marshmallow roots can be mixed with a small amount of warm water to form a kind of paste. This ointment or salve can be topically applied to areas of inflammation for a rapid relief. You can also soak this root in water, and then rub the infused water on aches and pains, as well as on irritated patches of skin.

Best way to take marshmallow root is by supplements. Herbal tablets of about 5 mg can be taken once per day or a liquid alternative of 5-15 ml 3 times daily.

As a cough and respiratory agent, 2 grams of the root should be put into one cup of cold water, soaked for two hours and then gargle.

For topical use, shredded root should be mixed with enough warm water to form a thick paste and spread onto a clean cloth. Apply to the irritated area as needed.

Marshmallows are great to bring with you to the cottage or camping, but did you know that you can make marshmallows right in your very own home?  Not only that, it isn’t incredibly complicated either. The recipe below gives you a chance to make your own yummy marshmallows, should you desire them as an infrequent treat.

Side Effects of Marshmallow Root

Despite the many benefits of this herbal remedy, there are some potential side effects, such as a dangerous drop in blood sugar, complications with pregnancy and negative interactions with other medications.

If you are pregnant, it is not recommended that you use marshmallow root in any form, as it can have stimulant effects on the body, which could induce labor prematurely or complicate the pregnancy in other ways.

Certain drugs will be less effective if taken in conjunction with the marshmallow root. The presence of mucilage and other active ingredients in this herbal remedy may inhibit the medication’s ability to be absorbed by the body. If you are on any medications, speak to your doctor before adding this root to your natural health regimen.

While controlling blood sugar can be great for diabetic patients, an excessive amount of marshmallow root can cause blood sugar to drop to dangerous levels, particularly if you use this herb in conjunction with other diabetic medications.