Trending
You are at:Home»Vegetables»Burdock – Arctium lappa 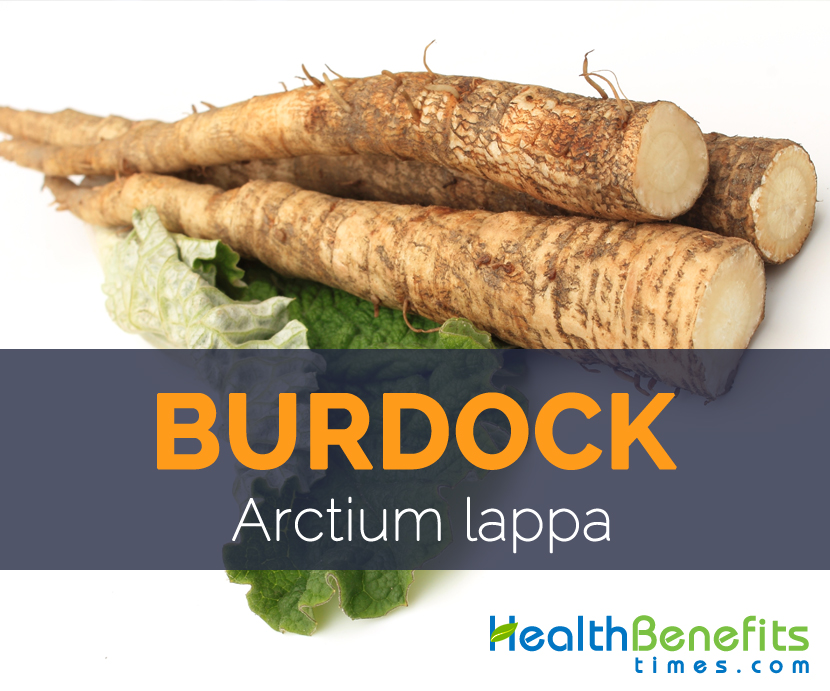 Burdock belongs to the family of Asteraceae; in the genus of Arctium, and known scientifically as Arctium lappa which is originated from northern Europe to northeast Asia including northern India. Burdock root is an underground tuber of greater burdock plant which is used as a vegetable and medicinal herb. Some of the common names of burdock includes Bat Weed, Cuckold,  Beggar’s Button, Grass Burdock, Burdock, Beggar’s Buttons, Burs, Clotbur, Cockle- Button, Edible Burdock, Fox’s Clot, Gobo and Cocklebur. It is popular in Brazil as Bardana, Bardane in France, Gobo in Indonesia, Ueong in Korea and Gobo (Root) in Japan. Arctium minus, Arctium lappa, Arctium tomentosum are few of the popular varieties of Burdock which is used medically and as vegetable.

Burdock is a biennial herb sized 100–300 cm tall from Asteraceae family found growing in cool climate. It usually prefers deep profiled and well-drained sandy loam or fresh, worked soil and well-drained soil rich in humus or nitrogen. Roots are normally slender, fleshy, tapering roots similar of carrot or parsnip, which can grow up to 120 cm long and 3–4 cm across. Stems are erect, hollow, branched, hairy, and ridged. It may reach 5 ft.in heights. Leaves are broadly heart-shaped, 6-18 inches long, 4-14 inches wide, with hollow petioles and wavy and toothed margins.  Bottoms of these leaves are loosely hairy and light green.  Stem leaves are much smaller, alternate, and egg-shaped. Flowers are purple and grouped in globular capitula, united in clusters and are found blooming from July to September.

Burdock root is an underground tuber which is used as a vegetable and medicinal herb. Roots are normally slim, fleshy, tapering roots similar in shape of carrot or parsnip, which grows up to 120 cm long and 3–4 cm across. Roots are brown in color with white colored flesh inside. Roots are sweet, mild, and pungent flavor and have taste similar to parsnips, scorzonera or Jerusalem artichokes and features crunchy texture along with gummy consistency. Nearly all the parts of the plant are being used either for cookery purpose or as a curative medicine for certain medical conditions.

The fruits are achenes and are long, compressed, with short pappuses. Seeds are brownish-grey, wrinkled, about 1/4 inch long and 1/16 inch in diameter.

Burdock is stated to have originated in northern Europe to northeast Asia including northern India. It has become naturalized in many parts of the world, growing wild all through Europe and North America where it is used as folk medicine. Later on Japanese developed it as an edible vegetable when it was introduced into Japan a thousand years ago. Today, burdock is extensively grown in Japan, China, Taiwan and also some Southeast Asian countries mainly for export to Japan.

Burdock is a biennial herb which grows in cool climate. It is full of nutrients, vitamins and minerals which are essential for the body to perform its functions effectively. Frequent consumption of Burdock helps to maintains the blood pressure, take good care of digestive issues, cure diabetes, good for healthy skin and many more benefits.

Burdock has inspiring ability to lower blood pressure. The plant have high concentration of potassium, a vasodilator, which helps to release tension within the cardiovascular system by soothing the blood vessels and arteries, thus helping to prevent atherosclerosis, heart attacks, and strokes.(1)

Burdock is loaded with fiber which is useful to stimulate the digestive system and move food easily through the bowels, decreasing constipation and avoiding cramping, bloating and ulcers. Inulin, a particular type of fiber found in burdock, helps to reduce inflammation in the gut and remove many types of harmful bacteria that can cause diarrhea as well as other gastrointestinal problems.(2)

Although almost all kinds of fiber can regulate the balance of insulin and glucose within the body, inulin is mainly effective and has been directly associated to reduce the development and harshness of diabetes and diabetes-related symptoms. The considerable amount of inulin in burdock helps to lower overall blood cholesterol by removing it from the body, thus further protecting your cardiovascular system.(3)

The chemical which give burdock its bitter taste also stimulates bile production as well as digestive juice within gut. It also helps liver to process toxins and flush them from the body very rapidly.  Burdock’s organic compounds and components helps to clear toxins from the blood.(4)

Pimples, rashes, skin inflammation, manifesting as spots, acne or discoloration are caused due to poor dietary habits, constipations and high toxicity in the blood. For these skin related problems, different research recommend using burdock root supplements and herbs, since this powerful herb can easily solve original problems of toxicity or constipation in a fast and effective way, leading to clearer, healthier skin.(5)

Hormonal disorder can be destructive and problematic for your life and to avoid such disorders you need to add foods and herbs that help to regulate hormonal activity in the body. Burdock helps liver to absorb certain hormones, like estrogen, which help to rebalance the body’s hormonal levels to normality. Excess estrogen is the reason of numerous dangerous or even deadly hormonal disorders, therefore including some burdock root in your weekly diet is extremely beneficial!(6)

The significant levels of vitamin C and E, both of which act as antioxidants in the body to eliminate free radicals, mean that burdock is a major booster to our immune system function. These antioxidants are related to lowering one’s risk of cancer, preventing infections and supporting proper growth, development, and repair of the body’s cells and tissues.

Burdock consists of considerable amount of vitamin B6 which is extremely beneficial for decreasing the occurrence of asthma attacks. The essential nutrient that are presents in burdock has assisted those with asthma to decrease symptoms of wheezing which are related with asthma attacks, as well as to lower the sternness and frequency of the attacks occurring.

Phosphorus contained in burdock is essential for bone health and also maintaining teeth and gum health. Calcium, phosphorus and vitamin D present in burdock helps in the preservation and formation of dental health simply by supporting jaw-bone mineral density, tooth enamel and holding the teeth in place, too therefore, these minerals and vitamins help to heal tooth decay.

Vitamin D is required together with phosphorus to control body’s balance of calcium and enhance its absorption during tooth formation. Vitamin D helps to decrease inflammation of gums which is related with periodontal gum disease.

Manganese, along with supplements that contain glucosamine hydrochloride or chondroitin sulfate, is a suggested natural treatment for arthritis. Regular consumption of manganese rich foods along with other supplements will help to reduce inflammation of joints and tissues and help arthritis patients to feel more comfortable and perform more usual activities.

Burdock consists of minimal amount of Copper which is essential for proper mental functioning. Normally copper rich foods are also called “brain food” because it helps enable certain neural pathways which encourage out of the box thinking. If it lacks during the growth period it may result in incomplete brain as well as nerve development. So include burdock in your diet to fulfill your copper requirement of the body.

Iron present in burdock is helpful for the treatment of anemia that takes place in women throughout pregnancy or menstruation. New red blood cells must substitute those that have been lost, therefore consuming considerable amounts of iron is essential for those women at those points in their lives. Burdock consumption also fulfills few of the iron requirements of the body.

13. Treats back pain and cramps

Burdock consists of marginal quantity of magnesium which helps body to absorb calcium that may result in faster healing of the bone related problems. Cramps in leg, general fatigue are the traditional symptoms of magnesium deficiency so proper intake of magnesium supplements is required to heal all types of chronic leg cramp problems.

Vitamin B9 contained in Burdock is a dependable resource for preventive defects during pregnancy and the birth of a child. It is a common condition that pregnant women maintaining a diet lacking of this vitamin are far less probable to deliver a healthy child. The birth defects caused by its deficiency comprise neural tube defects. Therefore, Vitamin B9 efficiently increases the chances of giving birth to a healthy, happy child.

Other Traditional uses and benefits of Burdock

Burdock is a beneficial herb which is found beneficial in many ailments. It is a biennial herb which grows in well-drained sandy loam or fresh, worked soil rich in humus or nitrogen. Taproot of young burdock plants are harvested and eaten as a root vegetable as well as herbal medication too.