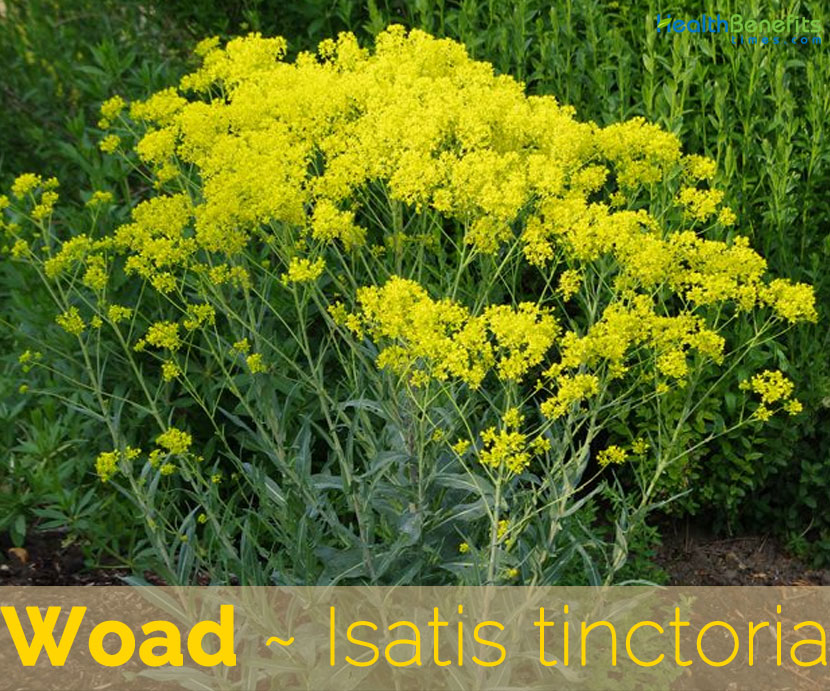 Isatis tinctoria, also called woad, dyer’s woad, or glastum, is a flowering plant in the family Brassicaceae⁄ Cruciferae (Mustard family). It is occasionally known as Asp of Jerusalem. Woad is actually the name of a blue dye which is produced from the leaves of the plant. Woad is native to the steppe and desert zones of the Caucasus, Central Asia to Eastern Siberia and Western Asia but is now also found in South-Eastern and Central Europe and western North America. In medieval times there were important woad-growing regions in England, Germany and France. Towns such as Toulouse became prosperous from the woad trade. Woad has been used in traditional Chinese medicine for centuries. There has also been some revival of the use of woad for craft purposes.

Dyer’s woad, wade, woad, Asp-of-Jerusalem and glastum are some of the popular common names of the plant. Woad is a common name for this plant plus the name of the blue dye extracted from the leaves of the plant. Genus name is the classical Greek name for this plant. It was cultivated in Britain up to about 1930 for production of a blue vegetable dye. It is much less in demand today for commercial dye purposes because of the creation of synthetic dyes which have now taken its place, as well as the place of Indigofera tinctoria, as a main source of blue dye. Specific epithet from Latin means used in dyeing.

Woad is a winter biennial or a short-lived, usually monocarpic, perennial plant that normally grows about 1-4 ft. (0.3-1.2 m) tall. It typically grows in the first year as a large-tap rooted basal rosette to 12 inches tall, with branched, alternate-leaved flowering spikes rising above the basal rosette in the second year to 2-4 feet tall. The plant is found growing in cliffs, cornfields, often on chalky soils, roadsides, rangelands, open forests, railroad right-of-ways, fields, pastures, grain and alfalfa fields, rangeland, especially big sagebrush, sagebrush hillsides, prairies and waste areas. Roots are fleshy and conical in shape, measuring about 2 – 3 cm across and about 20 – 30 cm in length. The main roots are yellow on the soil surface and have small stripes along with some petite fibrous roots. It can grow more than five feet deep and smaller lateral roots that spread outwards near the surface. Upper part of the stem is abundantly branching, glabrous and bluish green.

Rosette leaves and stem leaves of dyer’s woad differ slightly in morphology. Rosette leaves (basal leaves) grow up to seven inches (18 cm) long, are broadest near the tip and taper to a point at the base, have small-rounded teeth (crenulate), are ciliate and pubescent with simple hairs, and have a short petiole. Stem leaves have no petiole (sessile), have auricles that clasp the stem, the margins are mostly entire, and they are without hairs (glabrous). Stem leaves are alternate along the stem. All leaves have a prominent cream colored mid-rib extending the entire length of the leaf, and a bluish-green color. The leaf color and prominent mid-rib are good identifying characteristics of dyer’s woad.

Flowers of dyer’s woad are bright yellow. Like all mustard flowers, they have four sepals (about 0.14 inches or 3.5 mm long), four petals, six stamens; two of which are shorter than the other four (tetradynamous). There are many flowers on much-compounded racemes that reach one to three feet (0.3 to 1.0 m) in height. Multiple floral stems per plant is common for dyer’s woad, and the combination of multiple stems with many branches bearing many bright yellow flowers gives dyer’s woad plants a showy appearance. The length of time from the initiation of flower stem growth to seed set is about eight weeks. Flowering normally takes place in between June to August.

Fertile flowers are followed by produces a teardrop-shaped silicle that hangs from a small stalk, 6-10 mm long. Silicles are black to purplish-black, narrowly oblong, winged, and blunt-tipped, flattened, 0.4 in. (0.9 cm) long, 0.25 in. (0.6 cm) wide, and lack a septum. The style is lacking.

Seeds are mostly single, but occasionally a second seed is produced but is not viable. The dull brownish yellow seeds are cylindrical and weigh 3.9 mg and grooved into two unequal halves. Plants may produce 350 to 500 seeds each, but selected plants have been known to produce more than 10,000 seeds in one year. 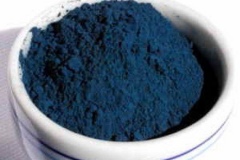 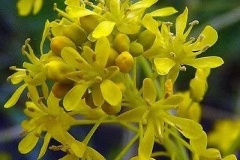 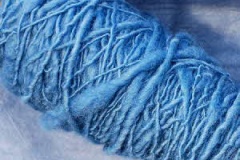 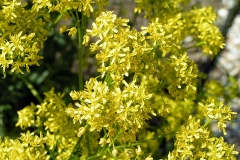 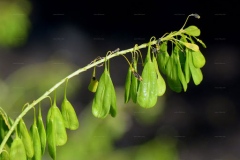 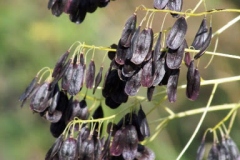 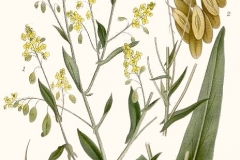 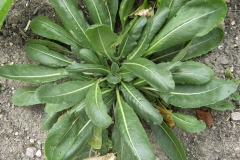 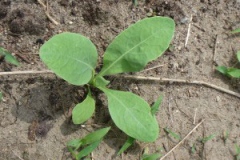 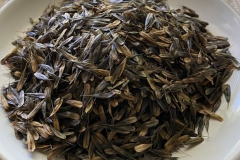 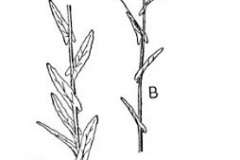 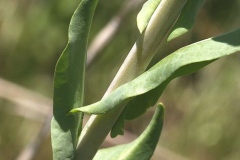 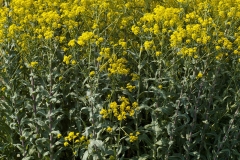 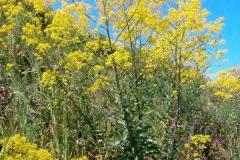 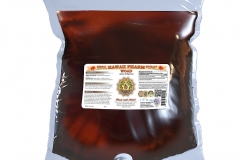 Let’s take a look at some of the health benefits that are related with woad:

Parotitis is characterized by the inflammation of the parotid gland, which is a main salivary gland. When you have mumps, one of the problems related with it is parotitis. Woad possesses anti-inflammatory properties, and that is why its topical use can be very helpful to those who are suffering from parotitis.

Woad is also occasionally used for putting an end to diarrhea. It does so by killing off bacteria in the gut that is causing the stools to be watery. However, woad is hardly taken orally most especially in strong doses because of its very strong astringent properties, which means it can cause the tissues to contract.

Medical doctors call them aphthous ulcers, but everybody else is calling them canker sores. Unlike cold sores that are due to the herpes simplex virus, canker sores are not transmissible and they do not appear on the lips. One of the traditional remedies for canker sores is woad, courtesy of its anti-inflammatory and anti-bacterial properties.

One of the traditional uses of woad is for the treatment of tick bites. Some tick bites can actually cause further problems, such as headaches, nausea, muscle aches and pain, and flu-like symptoms. Usually, these associated symptoms appear a few days after the individual has been bitten by ticks.

Woad is wonderful option for the treatment of bone infection, or what doctors call “osteomyelitis”. It is possible for a bone infection to be caused by bacteria and fungi. Since it is a very serious matter, it’s very important for a person who has it to strictly follow the treatment course provided by a specialist.

Traditional uses and benefits of Woad

Woad leaves offer a number of therapeutic benefits and, therefore, have different applications. The standard dosage of the leaves differs depending on the manner in which they are taken. The starting dosage of a dried Isatis leaf powder and concentrated dried leaf decoction are given below:

Dried leaf decoction extract: The starting dose is anything between one and four grams daily.

Early recognition and immediate action are the most important control measures for Dyer’s Woad. Once detected, hand-pulling can be very effective. For best results, plants should be removed by flowering and the area checked once again 2-3 weeks later for any that might have been missed.6 Plants in flower should be bagged and burned when fully dry

Dyer’s Woad is unpalatable but not toxic. Cattle refuse to graze it which enhances its spread in pastures or rangeland. Sheep readily consume the shoots up to flowering and thus may be suitable for control in these areas.

Cultivation of the rosettes prior to bolting and flowering can eradicate newly established populations. Mowing is less effective due to the woody stems and the ability of the plants to resprout from the crown.

Dyer’s Woad in the U.S. has been efficiently controlled with the use of specific herbicides. Currently no selective herbicides are recorded for use on Dyers woad. Always check product labels to ensure the herbicide is registered for use on the target plant in Canada by the Pest Management Regulatory Agency. Always read and follow label directions. Consult your local Agricultural Fieldman or Certified Pesticide Dispenser for more information.

Literature and field surveys have exposed several biological control candidates however testing was discontinued in 2008 due to lack of funding.