Trending
You are at:Home»Herbs and Spices»Traditional uses and benefits of Yellow Elder 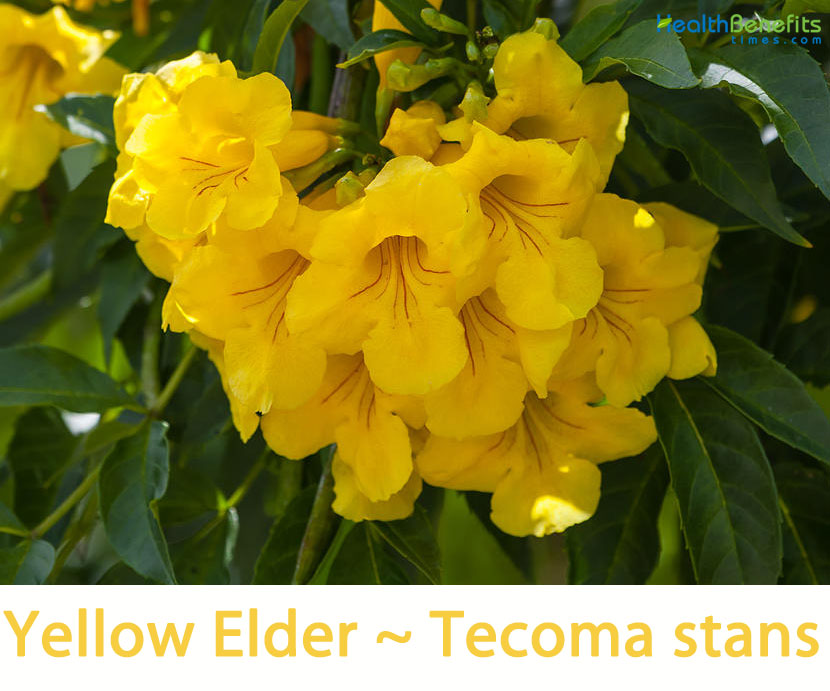 Tecoma Stans commonly known as Yellow Elder or Trumpet Flower is a species of flowering perennial shrub in the trumpet vine family, Bignoniaceae. The plant is native to American southwest, from Texas to Arizona, and regions of Chihuahua and Sonora, Mexico. It is often found in other warm climates of the Americas such as Florida, and the Caribbean. It can also be found as far south as Argentina. Yellow bells have become a nuisance weed and are even considered an invasive plant in Hawaii, and southern Florida. Some of the popular common names of the plant are Ginger-Thomas, Trumpet flower, Trumpet bush, Yellow trumpet bush, Yellow bells, Yellow bignonia, Yellow elder, Yellow trumpet-flower, yellow blossom, Ginger Thomas, golden seal and tecoma.

The Yellow Elder was chosen as the national flower of the Bahamas because it is native to the Bahama Islands, and it blooms throughout the year and is the floral emblem of The Bahamas. The generic name is derived from the Mexican word for the plant, tecomnaxochitl, which means vessel-flower and refers to the large, cup shaped or trumpet-shaped blooms. The specific name means erect or upright in Latin.

Stem is solid and cylindrical. The younger stems are smooth, glabrous and greenish in color. They are slightly four-angled in cross-section (quadrangular) and turn pale brown or reddish-brown in color as they age. The bark on the main stem is light brown to pale grey in color, furrowed, and relatively rough in texture, covered in light greyish to brown barks.

The leaves which are 10-25 cm long are arranged in pairs (oppositely arranged) and are borne on slender stalks (petioles) 1-9 cm long. They are compound (pinnate) with 3-13 leaflets, but usually have 3-7 leaflets. The leaflets are narrowly egg-shaped in outline with broad end at base (ovate-lanceolate) or elongated in shape (25-100 mm long and 8-30 mm wide) and have a pointed tip (acuminate apex). Their margins are irregularly and sharply toothed (serrated) and they are mostly hairless (glabrous), though both sides of the leaf blade are smooth and mostly glabrous, though a few hairs may be present on the undersides near the midrib.

The showy flowers are borne in several-flowered clusters (5-15 cm long) that are first produced at the ends of the branches (in terminal clusters), and then later in the leaf forks (axils) near the tips of the branches (in axillary clusters). These flowers are bright yellow in color, tubular in shape, and borne on short stalks (pedicels) that are slightly curved or twisted. The flower tube (corolla tube) is 30-50 mm long and has five rounded lobes that are 8-30 mm long. There are several faint reddish lines in the throat of the flower, which is slightly ridged and hairy. In some varieties the corolla is slightly orange-yellow with pinkish lines in the throat. Flowering may occur throughout the year.

Fertile flowers are followed by large, elongated (linear), shiny and somewhat flattened (compressed) capsules (10-30 cm long and 5-20 mm wide) pointed at the end. These fruit are initially green turning to brown in color as they mature and finally these two-valve dehiscent capsule splits open to release up to 77 (mean  42) papery-winged seeds which are primarily wind, and to a lesser extent water, dispersed.

The seeds are very flat, oblong in shape measuring up to 7-8 mm long and about 4 mm wide, and together with the transparent wings at each ends the size of the entire seed is about 20 mm long and 6 mm wide. 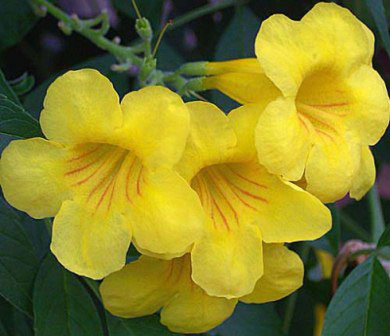 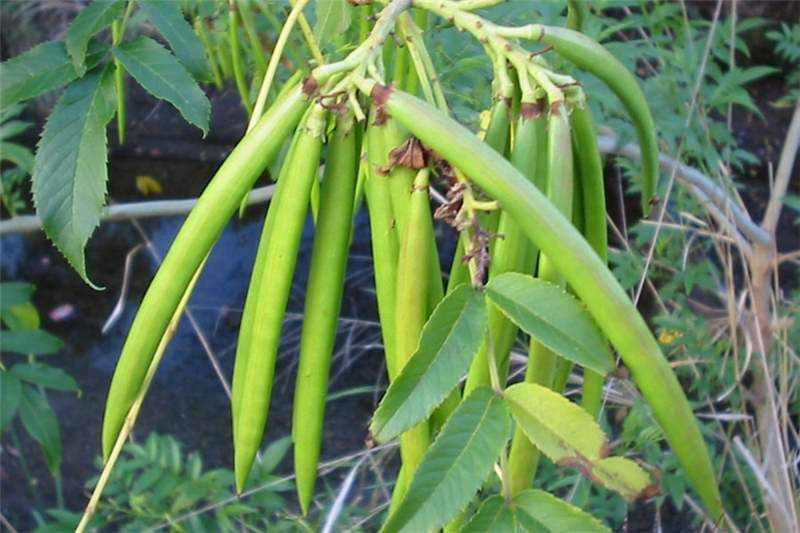 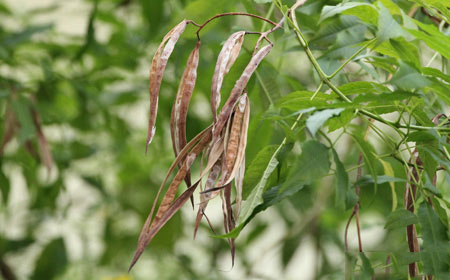 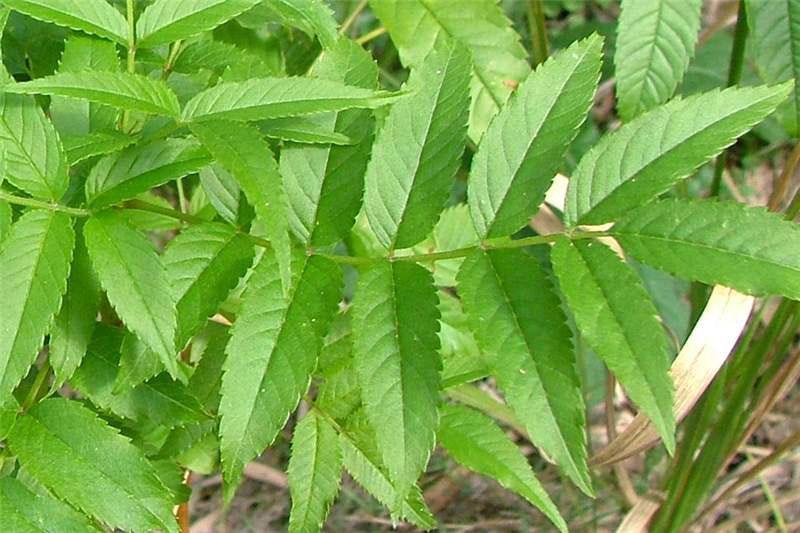 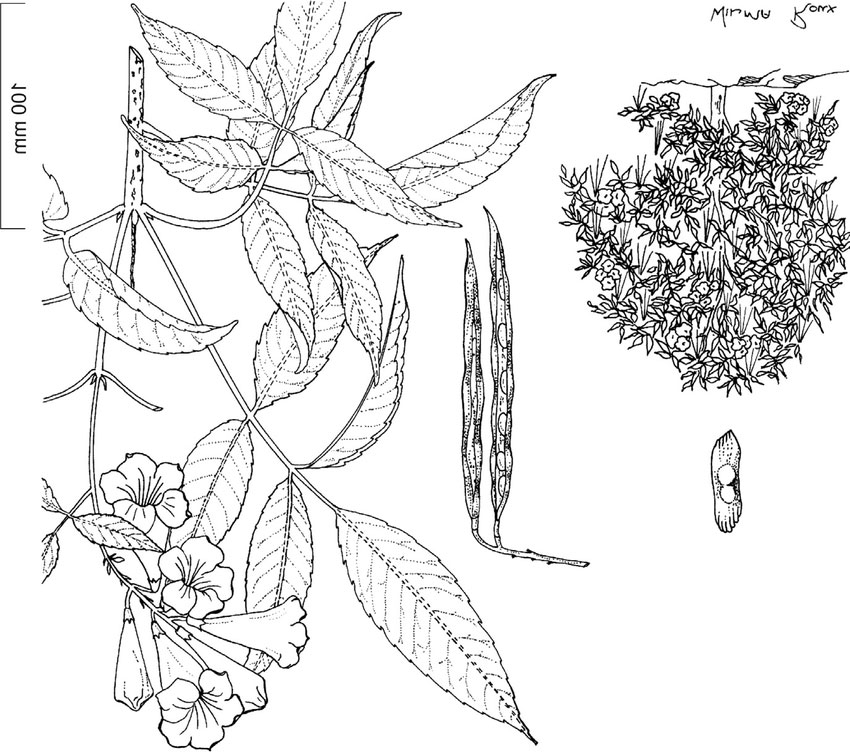 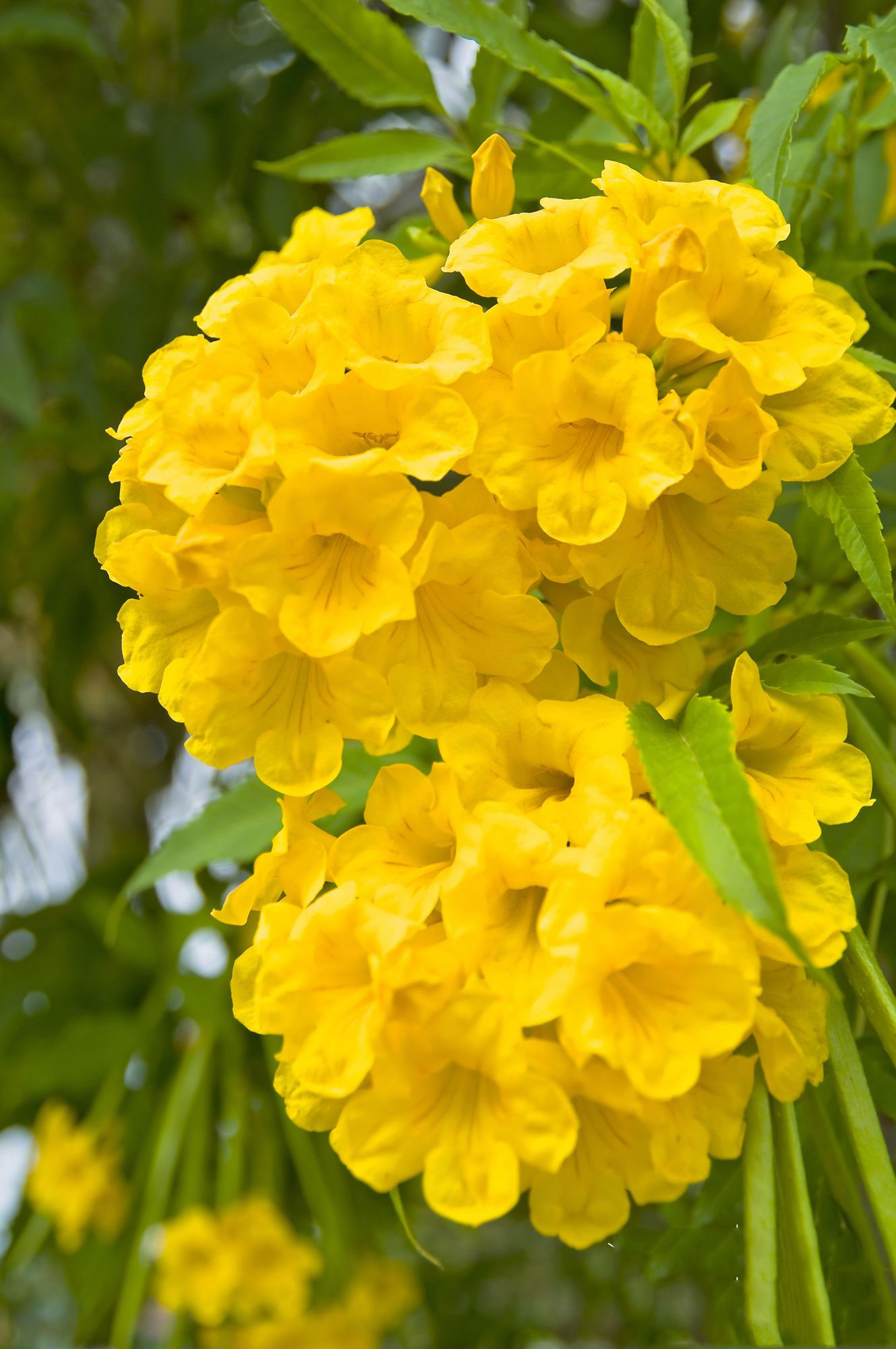 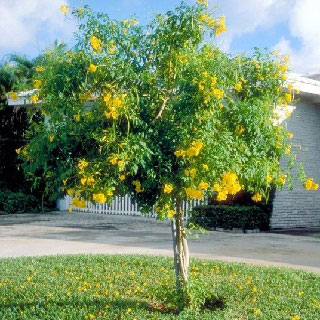 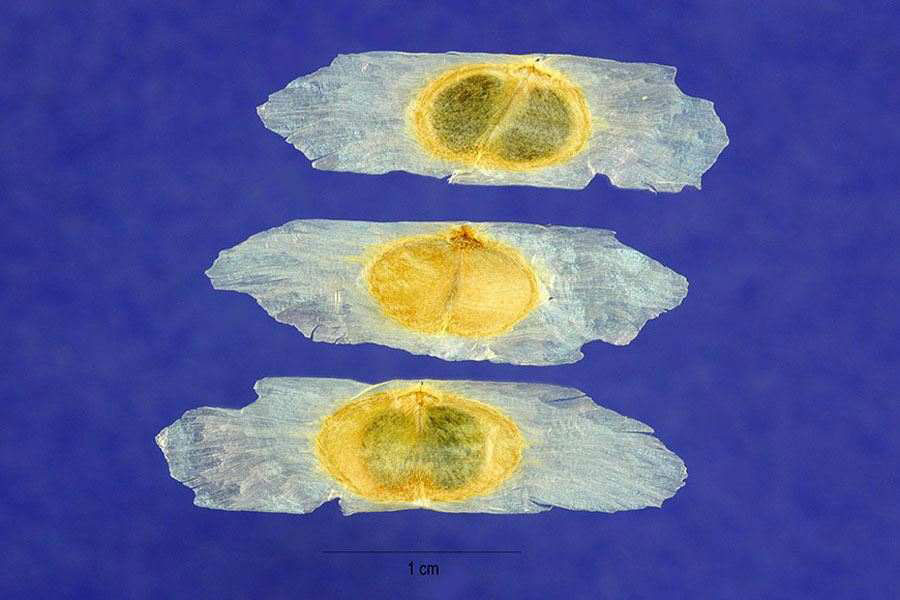 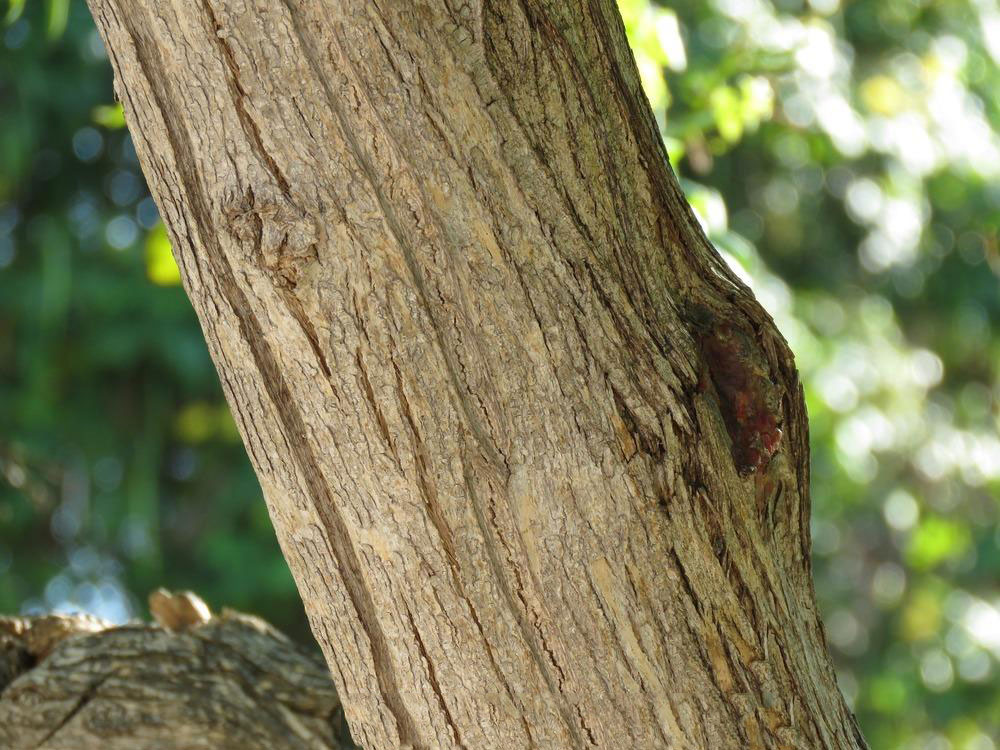 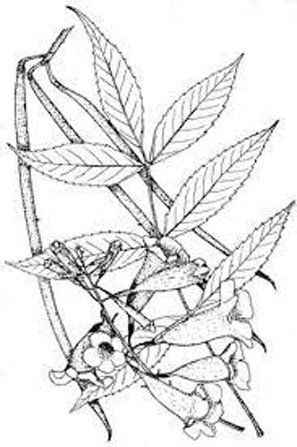 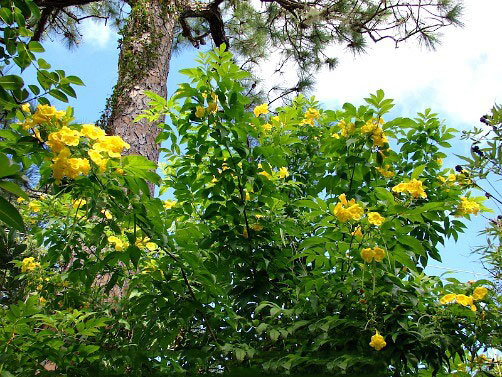 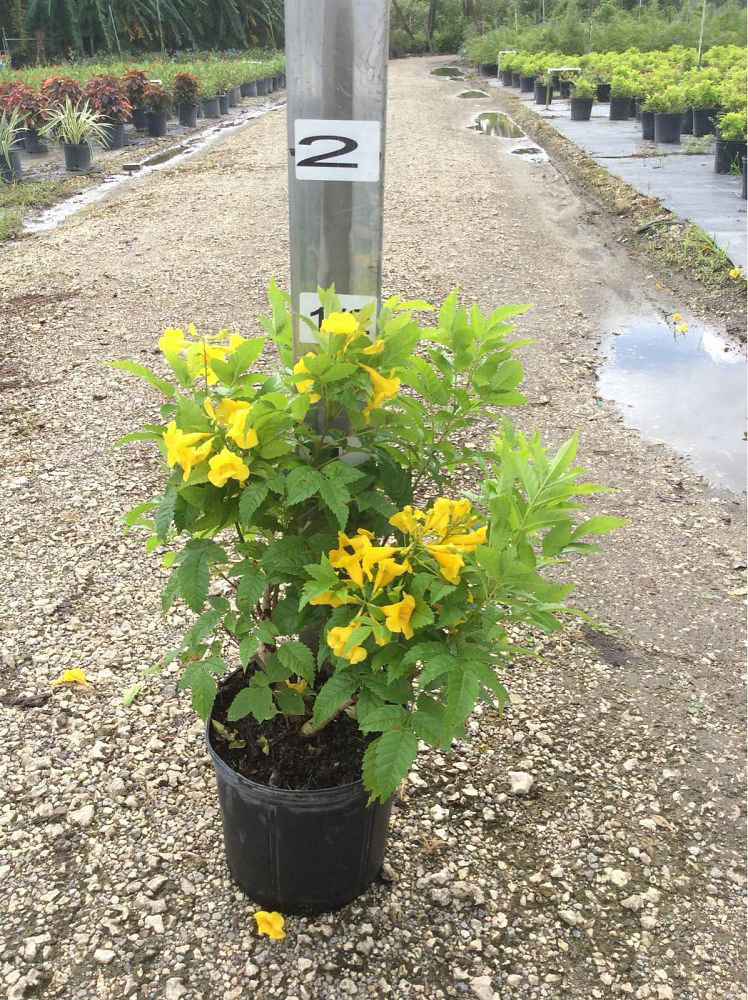 Orange bells have compound (i.e. pinnate) leaves that are oppositely arranged along the stems. These leaves have several toothed (i.e. serrated) leaflets and are borne on long slender petioles. Its moderately large (3-5 cm across) tubular flowers have reddish-orange outsides. Its fruit are long and narrow capsules (10-30 cm long) that split open when mature to release numerous papery seeds.

Golden trumpet vine has simple leaves that are clustered (i.e. whorled) along the stems. These leaves have entire margins and are borne on short stalks (i.e. petioles). Its flowers are very large (6-15 cm across) and its fruit are rounded and prickly (4-6 cm long) capsules that split open when mature to release numerous winged seeds.

Shrubby allamanda has simple leaves that are clustered (i.e. whorled) along the stems. These leaves have entire margins and are borne on short stalks (i.e. petioles). Its flowers are moderately large (3-6 cm across) and its fruit are rounded and prickly (4-6 cm long) capsules that split open when mature to release numerous winged seeds.

Yellow oleander has simple leaves that are spirally arranged (densely alternately arranged) along the stems. These leaves are long and narrow (i.e. linear) with entire margins and obscure stalks (i.e. petioles). Its flowers are moderately large (4-6 cm across) and its fruit are large fleshy drupes (25-55 mm across) that are somewhat rounded or slightly triangular in shape.

Including various control methods is the most effective approach and includes the prevention of new introductions, dispersal and sales by the nursery trade as well as mechanical and chemical control.

Maintaining a vigorous ground cover, preventing overgrazing and rehabilitating disturbed areas remains one of the best methods to prevent establishment and invasion of T. stans. Frequent inspections of pastures and forest margins are necessary to locate seedlings that can be hand-pulled. Larger plants can be uprooted by using a tractor, but resprouting from cut roots can cause rapid reinfestation unless the remaining roots are burnt after drying. Rehabilitation of such disturbed areas after uprooting and burning is essential. Follow-up control to remove the regrowth is necessary for at least a year after initial control.

Conventional chemical control methods of shrubs and small trees as practiced by most municipalities and counties are not effective against T. stans. Only repeated applications of foliar-applied herbicides are effective but this method is usually not economic. More effective are cut-stump application methods using oil-based or oil/water emulsions of 2, 4-D and picloram mixtures. These are generously applied to the freshly cut stumps by spraying or painting. Soil applied tebuthiuron also gave excellent control 270 days after treatment.

Host specificity tests on two rust fungus species, namely, the microcyclic Prospodium transformans and the macrocyclic P. appendiculatum from Mexico are in progress in South Africa. P. appendiculatum is already present in Brazil and Argentina but is not contributing much to the suppression of populations. Further surveys for additional host-specific natural enemies are planned. A raceme-feeding membracid and the pyralid pod-feeding moth Clydenopteron sp. are to be introduced into quarantine in South Africa for possible biological control.