Trending
You are at:Home»Herbs and Spices»Health benefits of Yerba Santa – Eriodictyon californicum 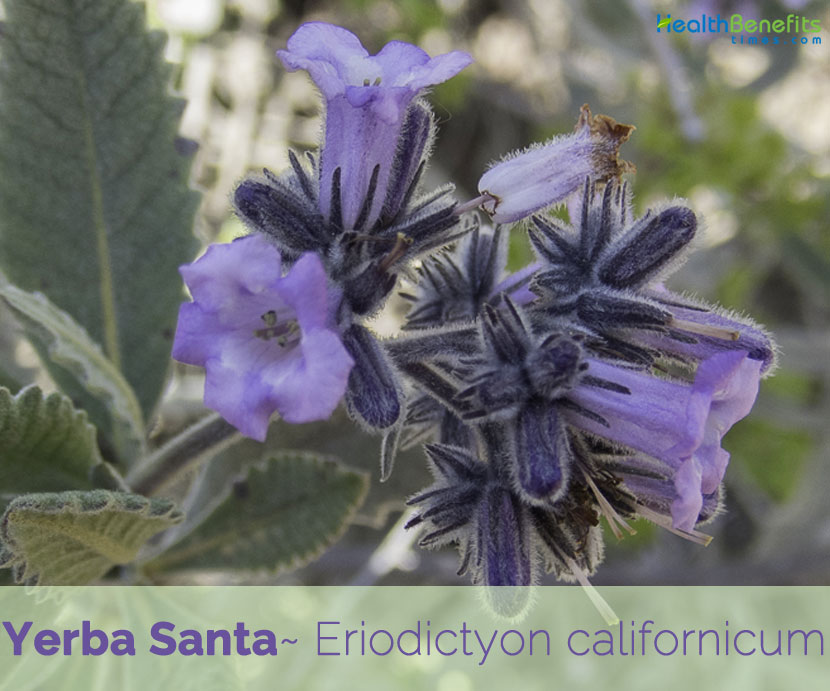 Yerba Santa, also known by its scientific name Eriodictyon californicum, is a flowering shrub within the family Boraginaceae measuring up to eight feet off the ground with white or lavender flowers. The plant is native to hills and mountains of California, Arizona, Nevada, Oregon, and Northern Mexico and is often cultivated as an ornamental shrub. Similarly it is spread along the Coast and Klamath ranges from Monterey County north to Siskiyou County, California.  It occurs in the Sierra Nevada and Cascade Range from Kern County north to Klamath and Jackson counties, Oregon. The plant is said to produce an unpleasant odor and has a bitter taste that ultimately turns sweet, and some say the sweet flavor is reminiscent of bubble gum. Bear’s weed, Consumptive’s weed, Eriodictyon, Gum plant, Mountain balm, Tarweed, Yerba santa, gum bush, Hierba Santa, Holy Herb, Tarweed, Herbe des Montagnes, Herbe à Ourse, Herbe Sacrée, Herbe Sainte and sacred herb are few of the popular common names of the plant.

Leaves were used by Native American people like the Chumash people as a traditional medicine, and they are traditionally administered as a poultice or as a steam treatment. It was later introduced to early Spanish settlers who originally named it Yerba Santa or “Holy Herb” because it was so effective at treating respiratory ailments. It was also used less frequently to treat external conditions like bruises, wounds, bugs bites, and even hemorrhoids, although those conditions are not frequently treated using Yerba Santa today.

Yerba Santa is a low, erect, much-branched, native evergreen, aromatic shrub that normally grows about 2 to 8 feet (0.6-2.4 m) in height. The plant is found growing on dry, rocky slopes, ridges, coast redwood forests, dry rocky hillsides and ridges, patches on chaparral slopes, forests, canyons, along riverbanks, grasslands and oak woodlands. The plant grows in shallow to deep, slightly acidic soil.  Soil texture varies from sandy loam to heavy clay.  It can also tolerate serpentine soil. Root system is shallow, with multi branching rhizomes.  Most of the main roots are limited to the top 3 inches (7.6 cm) of soil. Stem is smooth, usually branched near the ground, and covered with a peculiar glutinous resin, which covers all the upper side of the plant.

Leaves are thick, tough and leathery, smooth and yellowish color. Their upper side is coated with a brownish varnish-like resin, the under surface being yellowish-white reticulated and tomentose, with a prominent midrib, alternate, attached by short petioles, at acute angle with the base; shape, elliptical, narrow, 2 to 5 inches long and 3/4 inch wide, acute and tapering to a short leaf-stalk at the base. The margin of the leaf, dentate, unequal, bluntly undulate. Foliage and twigs are covered with shiny resin and are often dusted with black fungi, Heterosporium californicum.

Flowers are white to lavender or purple in terminal clusters of six to ten, in a one-sided raceme, and shaped somewhat like little trumpets. The corolla is funnel-like and calyx sparsely hirsute. Flowering normally takes place from July to August. Fertile flowers are followed by small capsule, 0.08 to 0.12 inch (2-3 mm) long, containing 2 to 20 small black seeds. 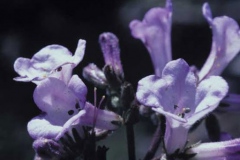 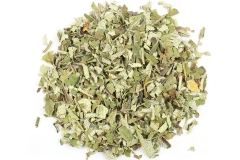 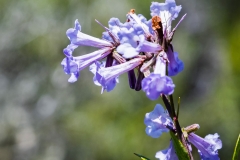 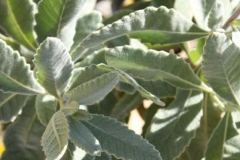 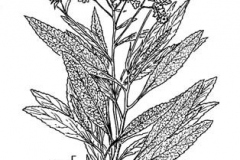 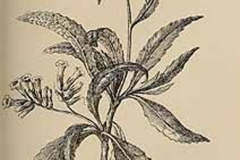 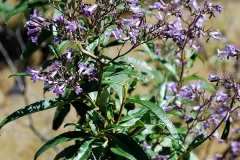 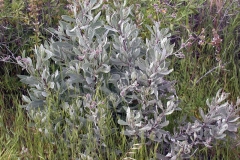 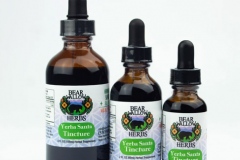 Yerba santa is popular for its use in respiratory conditions, mainly when there is a lot of mucus stuck in the body. It is considered one of the best decongestants, working as an expectorant by breaking up thick mucus and facilitating its expulsion from the body. For acute colds and coughs with upper respiratory and sinus congestion, yerba santa is extremely helpful. As a muscle relaxant, yerba santa works well for asthmatics as it dilates the bronchial tubes and allows air to flow more easily into the lungs. For asthma, yerba santa is often smoked in a pipe, for instance.

Research conducted in 1992 was able to isolate twelve compounds called flavonoids that inhibited the growth of cancer cells in cultured hamster embryos. From this research, they concluded that the plant may be able act as a cancer preventative therapy, and therefore it permits further study on live animals. From this study, they also determine that the plant also contains an antibiotic compound called eriodictyol.

Native Americans would often smoke or chew the leaves as a treatment for asthma. Tonic or tea made from the leaves of the plant is also useful for treating chronic asthma, and this method was often used by early European settlers in the western U.S. Although research in this area is lacking, many people who purchase Yerba Santa supplements and extracts claim that they found using Yerba Santa was more effective and easier to administer than typical asthma treatments. In several cases customers say that a single drop helps ease the symptoms of asthma anywhere from 4 to 24 hours.

The excess saliva produced when chewing Yerba Santa makes it effective in treating chronic dry mouth. Additionally, the sweet taste produced by the leaves is also effective in treating foul breath. Apart from chewing the raw leaves, oral sprays made from Yerba Santa are available, and reviews of those sprays are mixed, with some suggesting that they prevent oral dryness brought on by sleeping, and with others saying the effects are not long lasting. Research show that Yerba Santa based oral sprays can provide relief for up to two hours after use. Spray formulas also tend to be designed to prevent tooth decay as well.

Research suggests that using an aerosol spray made from a Yerba Santa extract helps to prevent dryness of the mucosal membranes of the upper and lower respiratory tract. Also it prevents the lungs from the irritation of bacteria and reduces coughing. Further research shows that the plant can reduce the amount of phlegm produced by the lungs while also addressing inflammation of the mucus-producing tissues, making it great for clearing up the “moist” parts of a cold, like runny noses. Testimony also recommends it is great for treating persistent coughs that did not respond to other medications.

Traditionally, the leaves of Yerba Santa would be rolled into a ball and then chewed in order to promote saliva production. This excess saliva consists of digestive enzymes that help to orally digest food, then ease an upset stomach, and improve digestive function. The herb is also thought to help increase appetite, improve bowel movements, and reduce gas and bloating. Although most people who purchase Yerba Santa products do so with the intentions of treating respiratory conditions, testimony suggests that many also see improvements in the digestive system as well.

Although there is not much research in this area, Yerba Santa is beneficial in clearing out the mucus caused by allergies and ridding the body of continually congested sinuses. It is also said to supplement the flow of urine, detoxifying the body of allergens. Many customers say that the herb is very useful in treating allergies when used in tea. Moreover, nasal sprays are also very popular among those who use the herb, and many say it is very effective in providing relief to a dry, irritated nose. Providing this moisture to the nasal passage also allows the nose to clear out trapped allergens.

Yerba Santa was often used as a common medical practice to treat bronchitis starting in the early 1800s up until the 1960s, until laws became stricter. Because of this there is unclear scientific evidence for this use. Many still use a Yerba Santa poultice to treat lung conditions like bronchitis by placing damp leaves on the chest. Many who have bought Yerba Santa extracts say that it is very effective in relieving tightness in the chest brought on by bronchitis.

At the onset of a cold, especially when there is a cough or bronchial irritation, yerba santa can eliminate or at least relieve the symptoms.

Poultice of yerba santa can be applied to bruises, insect bites, sprains, and wounds.

Smudging is a traditional Native American practice where herbs are burned as incense for numerous reasons. Yerba Santa is one of several herbs used in infant smudge bundles used to bring health to young children as well as in ceremonial smudge bundles used to honor ancestors, increase physic abilities, and bring health and protection. The bundle would be burned and allowed to smolder during this process. While not tested scientifically, many people who purchase smudge bundles claim that burning them creates a calming environment that releases negative energy.