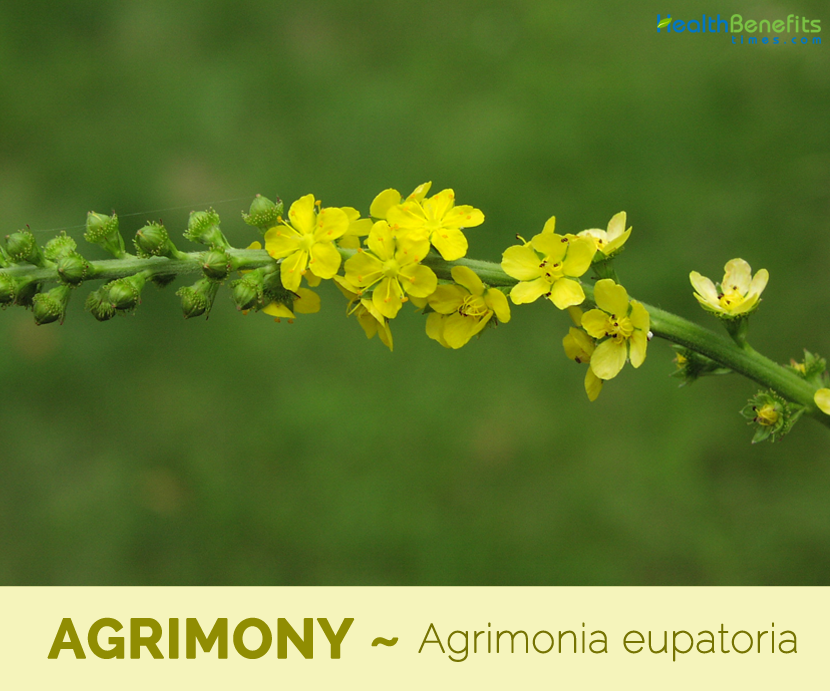 Agrimonia eupatoria commonly known as agrimony is a genus of 12–15 species of perennial herbaceous flowering plants in the family Rosaceae. The herb is native to the Europe, Western Asia and Northern Africa. Its name agrimony came from the Greek word Agermone meaning healing to the eyes and Eupatoria from  Mithridates Eupator, a Pontus king famous for having invented a complex ‘universal antidote’ against poisoning.  Thus agrimony from whence its name was derived has long been valued as an important herbal medicine through the ages. Agrimony was once considered a panacea or “all-heal” for illnesses. Apart from Agrimony it is also known as Churchsteeples, Cocklebur , stickwort , liverwort, Common Agrimony, Cockeburr, Sticklewort, Philanthropos, Ackerkraut, Agrimonia, Funffing, Herbe de Saint-Guillaume, Acrimony, Harvest lice, Aigremoine, Odermennig, Agrimonia, Herba agrimoniae, Agrimoniae herba, Burr Marigold, Garclive and Fairy’s Wand. Chinese medicine often used Agrimony to treat menstrual difficulties and during the middle ages this herb was used frequently as a sleep aid. In North America agrimony was used for a variety of ailments by Native Americans and up until the late 19th century agrimony was used throughout Europe and North America to treat skin conditions, cough, sore throat, and diarrhea.

Agrimony is perennial herbaceous flowering plants that grow about 0.5–2 m (1.6–6.6 ft.) tall. Agrimony is a peripheral plant, best suited for hedge banks, field margins, roadsides, dry thickets, and other shrubby waste areas of temperate regions in sun and semi-shaded places in dry, alkaline soils. The plant has long, black and somewhat woody perennial root. Stem is erect cylindrical and slightly rough, short haired and groove less, mostly unbranched, or very somewhat branched in large specimens. The whole plant is deep green and covered with soft hairs, and has a slightly aromatic scent; even the small root is sweet scented, especially in spring.

Flowers, though small, are numerous, arranged closely on slender, terminal spikes, which lengthen much when the blossoms have withered and the seed-vessels are maturing. At the base of each flower, which is placed stalk less on the long spike, is a small bract, cleft into three acute segments. The flowers, about 3/8 inch across, have five conspicuous and spreading petals, which are egg-shaped in form and somewhat narrow in proportion to their length, slightly notched at the end and of a bright yellow color. The stamens are five to twelve in number. The flowers face boldly outwards and upwards towards the light, but after they have withered, the calyx points downwards.

The plant later offers distinctive reddish-brown woody fruit, deeply furrowed and fringed with hooked bristles. Chinese medicine often used Agrimony to treat menstrual difficulties and during the middle ages this herb was used frequently as a sleep aid. In North America agrimony was used for a variety of ailments by Native Americans and up until the late 19th century agrimony was used throughout Europe and North America to treat skin conditions, cough, sore throat, and diarrhea.

In ancient times, agrimony was often used in numerous brews, solutions, and tonics. Leaves and flowers contain a unique chemical composition that can act on the body as a detoxifying, astringent, coagulating, and anti-inflammatory substance. For this reason, it has been used in the direct or secondary treatment of a wide variety of ailments over time. Now, let’s take a closer look at the health benefits of agrimony.

Agrimony has long been studied for its potential anti-diabetic properties, which would be a huge step forward in solving one of the great medical mysteries of our generation. Apparently, the active components of agrimony moderate the glucose and insulin uptake processes in the body better than many other natural diabetic treatments.(1)

If you are suffering from blemishes, pimples, rashes, acne, psoriasis, eczema, or any other skin condition, you can topically apply agrimony to the affected area and it can help to alleviate the issue. It can also be taken orally for the same effect. It works on irritation as well as blood eruptions that happen beneath the skin, like blotching and easy bruising due to its astringent properties.(2)

Agrimony consists of Silicic acid, and this exclusive compound is recognized to considerably boost the strength, appearance, and overall health of the nails and hair, preventing easy breakage or a dull appearance. It may not seem like the most important “health benefit”, but every little bit helps!(3)

Agrimony is widely used to improve respiratory conditions that may involve inflammation, such as sore throats, chronic coughing, bronchitis, and other sinus issues. For colds, coughs, and flus, it can be an effective way to speed up the recovery and healing process.(4)

When we are very old and very young, bladder control is a major issue. The astringent quality of agrimony makes bladder control easier, removing those embarrassing bed-wetting moments and accidents. Since it is non-toxic and has shown no signs of having negative effects on health, children have been using it for generations with no side effects or issues.(5)

Although research on the anti-cancerous effects of agrimony are still under consideration in various research studies, the potential of certain catechins and antioxidant compounds found in this perennial genus could contribute to treatments for cancer. Antioxidants neutralize free radicals, the dangerous byproducts of cellular respiration that can cause chronic diseases like cancer by causing health cells to mutate. The high count of antioxidants in it promises well for this research.(6)

Due to its cleansing properties in agrimony, it helps to promote hair growth, minimizes hair fall, and encourages softness and shine in the manes along with being a great detangler when used after shampooing.

Agrimony is used as a coagulant that can reduce bleeding in the body and help heal wounds. Although menstruation isn’t a wound, agrimony can be used orally to reduce heavy menstrual bleeding and reduce inflammation to make those difficult periods a bit more tolerable.(7)

Agrimony consists of thiamin, quercitrin, and catechins which have been directly linked to liver and gallbladder health. By enhancing the function of the liver and gallbladder, the body can more easily remove toxins that have built up, thus preventing more serious health issues and promoting overall metabolic efficiency.(8)

As an anti-inflammatory agent, agrimony has often been used to eliminate digestive and gastrointestinal issues, mainly diarrhea and other irritable bowel syndrome symptoms. By reducing irritation and inflammation in the membranes and tissues of the gut, it can considerably soothe the stomach.

Other Traditional uses and benefits of Agrimony

How to Use Agrimony Herb

One of the most common methods of enjoying this useful herb is by making tea. To treat diarrhea a cup of weak tea should be sipped up to six times a day. A stronger tea is used as a gargle to sooth sore throats and quiet coughs. To make the tea add one to two teaspoons of dried leaves stems or flowers to one liter of hot water and steep five to fifteen minutes depending on desired strength. For skin inflammation and to treat wounds soak a compress in very strong tea and apply several times daily. For skin issues essential oil may also be used. Agrimony is available as dried leaves, stems, and flowers, ground power, fluid extract, and essential oil.