Trending
You are at:Home»Herbs and Spices»Facts and Benefits of Balloon Flower 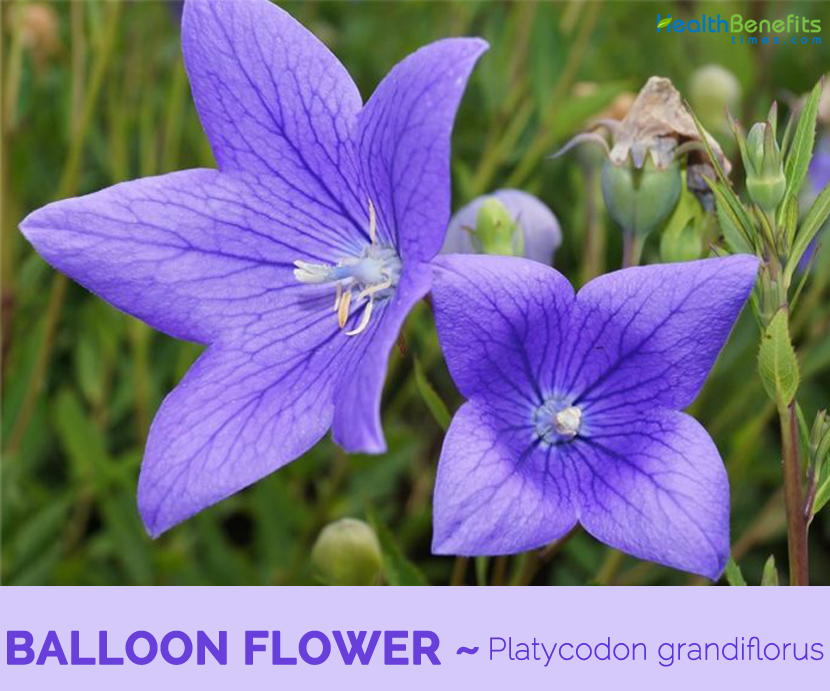 Platycodon grandiflorus commonly known as Korean bellflower, Chinese bellflower, Japanese bellflower, common balloon flower, or balloon flower and Blue balloon flower is a species of herbaceous flowering perennial plant of the family Campanulaceae that includes bellflower and lobelia, and the only member of the genus Platycodon. The plant is native to slopes and meadows in East Asia (China, Korea, Japan and East Siberia) but is today widely grown as an ornamental plant around the world. The botanical name, Platycodon, derived from the Greek “platys,” meaning “broad” and “kodon” meaning “bell,” explains why it’s also commonly called Chinese bell flower. Experienced gardeners easily will translate the word Grandiflorus to mean large. The plant is so named because its flower buds puff up like balloons before bursting open into outward-to-upward-facing, bell-shaped flowers with five pointed lobes.

Of all the hundreds of garden plants introduced from Asia to the West, it is certainly one of the most beautiful, but it is often overlooked not only for its ornamental value but also as food and medicine. Initially, the herbaceous perennial plant was grown as an herbal medicine and gathered in the wild. It is now days commercially harvested and its roots used as medicine. The plant consists of saponins, volatile, betulin acid, oils, sterols, insulin and glucose that are responsible for their medicinal effect. When combined with other compounds the chemicals react to form beneficial substance in the body.

Balloon Flower is an herbaceous flowering perennial plant that grows about 60 cm (24 in) tall by 30 cm (12 in) wide. The plant is found growing in dry meadows, rocky places among shrubs or in forest clearings. The plant prefers nutrient-rich, moist, well-drained, sandy soil, light, medium moisture, organically rich. Avoid wet or poorly-drained soils. The plant has erect stems arising from a thick root. In the past, the whole plant was used as herbal medicine and collected in the wild. Today it is only the root that is used medicinally and for the last few decades, it has been commercially cultivated in China. The roots are harvested in the spring or autumn from two or three-year old plants. In Japan, the young leaves are eaten and used in salads and in Korea the roots with the outer bark removed, are used in soups, pickled, or preserved in syrup. The root has a somewhat bitter taste.

The plant has alternate, oval, toothed bright green leaves that grow along the stems. This is a clump-forming plant.

Lavender-blue to white flowers have a thick rubbery texture and are 5 to 7 cm (2 to 3 inches) across. Flower bud swells up into a puff and slowly opens, passing through a bell shape to a swept back star with five petals, joined at the base. The purple-blue varieties are the most commonly grown, but it also comes in white and shades of pink. In Korea, white flowers are more common. This plant together with its cultivars ‘Apoyama group’ and ‘Mariesii’ have gained the Royal Horticultural Society’s Award of Garden Merit. Flowering normally takes place from Jul to August. Later seeds are produced in a five-valved seedpod. Seeds start ripening from Aug to September.

This is one of those classic plants that are often sold as an unnamed variety.

Don’t be afraid to purchase plants without pedigrees; they will grow fine and look lovely. However, there are some excellent named varieties to also look for.

The wide range of benefits that can be gained by using balloon flowers in your health regimen are based on the volatile active ingredients found in the root, which include betulic acid, saponins, phytosterol, inulin, and glucose. Together, these chemicals, along with some other organic compounds, can act quickly on the body for some measurable effects. Now, let’s take a closer look at the health benefits of balloon flower.

If case you suffer from an upset stomach, ulcers, dysentery, or any other gastrointestinal issue, you can count on the balloon flower herb to quickly remedy this pain and discomfort. These ulcer-resistant abilities mainly come from the saponins located in the root of balloon flowers. Additionally, the anti-inflammatory aspect of this herb can help to control digestion and lessen symptoms of hemorrhoids. (1)

Liver flukes are foul little parasites that can affect many different species, including humans. Balloon flowers have shown ability in the past to protect against various types of parasites, including those in the liver, increasing the organ’s efficiency and boosting your overall metabolism.(2)

Research have far been conducted outside of human test subjects, balloon flower has shown an remarkable ability to lower “bad” cholesterol levels and increase “good” cholesterol levels, which results in a lowered chance of developing atherosclerosis, which in turn lowers your chances of suffering a heart attack or a stroke.(3)

The most commonly known benefit of balloon flower relates to its impact on the respiratory system. The expectorant properties of the flower’s root help to ease congestion by breaking up phlegm and mucus, which can help relieve colds faster, and remove the bacteria and other pathogens that can thrive in mucus build-up. Additionally, the anti-inflammatory ability of balloon flower can calm sore throats and prevent chest conditions, such as bronchitis.(4)

Due to its analgesic qualities, balloon flower root has often been recommended for general pain and inflammation, such as that following an injury or surgery, as well as for patients that suffer from gout, arthritis, and other inflammatory conditions. The active ingredients act quickly on various parts of the body, providing both internal and external pain relief.(5)

Certain research have suggested that consuming balloon flower root can significantly reduce the severity of allergic reactions by inhibiting some of the histamines that are released by the body when certain substances are encountered. This could be great news for people with chronic or seasonal allergies! (6)

Although there has been some controversy regarding this ability of the plant, research has clearly shown that the active ingredients in balloon flower have the ability to reduce the size of tumors related to a number of different cancers. Additionally, antioxidant compounds found in the root of balloon flowers makes them very effective at neutralizing free radicals, which are the dangerous byproducts of cellular respiration that can cause cellular mutation and a wide range of long-lasting diseases, including cancers! (7)

Apart from the immune response of antioxidants that balloon flower root possesses, it can also encourage the regular immune system to lower your chances of contracting the common cold or influenza.

Weigh is related mostly with fat accumulation and since the root has chemicals that reduce weight they in turn help in weight reduction. A word of advice always related with any other herbal medicine is that seek medical advice before using any herbal medicine.

To treat a cold, you can take balloon flower in one of two separate ways:

Balloon flower root leaves, and flowers are ground to a powder and added to capsules to make them easy to take. Swallow 3–5 capsules a day until cold symptoms subside.

Some Chinese stores sell the balloon flower and plant as a whole herb. Add the herb to salads, sauté it as a side dish, or crumble it and add the leaves to dishes you cook at home. When you feel a cold coming on, brew a tea with the balloon flower leaves and roots and drink 2–4 cups of the tea daily until symptoms subside.

Balloon flower root is used both as tea or tincture. To make a tea, use 1 to 2 grams of dried, powdered root in one cup of boiling water and let it steep for 10 to 15 minutes.

As a tincture use 10 to 30 drops of in a glass of water or juice up to four times daily. When using commercial preparations the manufacturer’s guidelines should be followed.