Trending
You are at:Home»Herbs and Spices»Facts and Benefits of Japanese Cornel Cherry 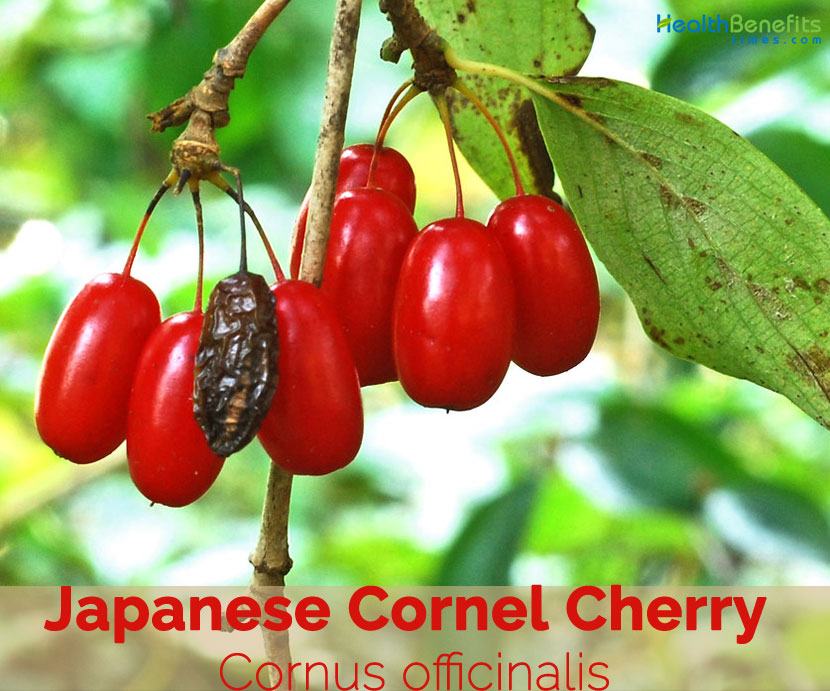 Cornus officinalis commonly known as Japanese Cornel Cherry, Cornelian Cherry Dogwood, and European Cornel is a species of the flowering plant in the dogwood family Cornaceae. Having its roots native to southern Europe this plant can be prominently found in the lands of France to Ukraine. Also this tree has shown its presence in south western Asia. Regions of Armenia, Azerbaijan, Georgia, Iran, Turkey, Israel, Lebanon and Syria have also observed the growth of its vegetation. Genus name comes from the Latin word cornu meaning horn in probable reference to the strength and density of the wood. Cornus is also the Latin name for cornelian cherry.

Japanese Cornel Cherry is a medium to large deciduous shrub or small tree that grows about 5 -12 meters tall. The plant is found growing in forests, forest margins as well as mountain slopes and it prefers almost all types of garden soil including sandy, loam and clay soils. Well drained moist soil is ideal for their proper growth. It bears deep brown branches, while the twigs are Slender, glabrous, purplish red and green, turn brown the second year, pith white, leaf buds slender and pointed, flower buds much larger and round. Barks are dark gray to reddish brown, scaly, curling with exfoliating patches.

Simple leaves are opposite; blade is oval or oblong, 5 to 7 cm long, and 3 to 4.5 cm wide, and with narrow long pointed apex, rounded or broadly cuneate base, entire margin, nearly smooth or occasionally pubescent upper side, and white hairy lower side. Petiole is about 1 cm long. The lustrous dark green leaves develop a deep plum red fall color.

Japanese Cornel Cherry trees bear small yellow flowers measuring about 5 mm to 10 mm. Each flower has four small yellow petals. These flowers appear in clusters of 10 to 25 flowers towards the end of winter much before the leaves of the new growth season appear. Flowering normally takes place from Feb to March.

Fruit is a reddish oblong drupe measuring about 2 cm in length and 1.5 cm across. Each berry-like fruit of this plant encloses a solitary seed. The fruit ripens from June and July. They serve as food for birds or can be used for preserves. They can also be used to make a wonderful sauce, something very akin to cranberry sauce, especially when they are pitted and subsequently boiled with orange and sugar.

A member of the dogwood family, this fruit has been used for 7,000 years as a food crop in ancient Greece. Japanese Cornel Cherry is native to regions of Eastern Europe and Western Asia. Known mainly as an ornamental plant in the U.S., its cherry-like fruits have been part of a healthy diet in some parts of the world for thousands of years. In its native range, it is still used as a fresh fruit and is popular as a fruit drink.

With properties similar to a tart cherry, other uses include syrup, jelly, jams, and pies, wine and baked goods. This historically significant fruit has lost favor in the industrialized age because it does not lend itself well to mass production and processing. The fruit has an elongated pit that is hard to remove because it adheres tightly to the edible flesh. Fruit ripens over an extended period of time, requiring multiple harvests.

1. Remedy for dysentery and diarrhea

Japanese Cornel Cherry has traditionally been used to treat dysentery and diarrhea due to its strong astringent action which is the result of high tannin content. The dry mouth sensation one feels when eating quinces, persimmon, sapodilla or Japanese Cornel Cherry is caused by the astringent tannins shrinking or contracting tissues. This limits the discharge of fluids and signifies a first step towards recovery from diarrhea or dysentery.

Japanese Cornel Cherry is supposed to be ideal for cold and flu prevention due to the fact that it contains high amounts of vitamin C, a potent natural anti-inflammatory, antiviral and antibacterial agent. In order for one to enjoy such health benefits, Japanese Cornel Cherry must be consumed raw (cooking heat destroys vitamin C)

Like most berries, Japanese Cornel Cherry fruit consist of generous amounts of antioxidants which offer protection against free radical damage from free radical molecules and protect against chronic disease.

Research on the properties and health benefits of Japanese Cornel Cherry has found that regular consumption of the berries improves liver function by exercising a strong hepato-protective action.