Trending
You are at:Home»Fruits»Goji berry facts and health benefits 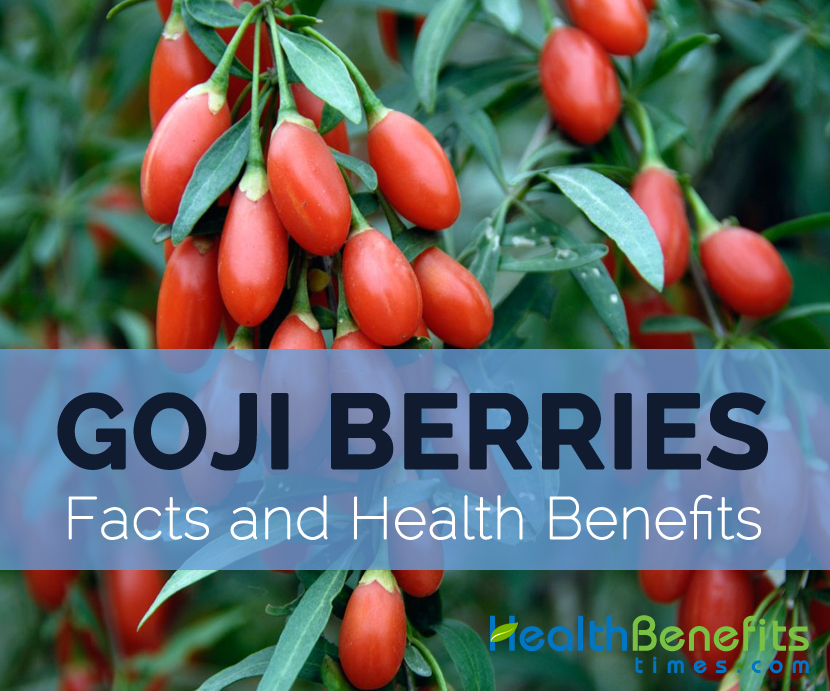 Goji berry was used in China and Tibet for thousands of years as a culinary ingredient and medicinal purpose. But it was introduced in Western countries in recent years.

It grows to about 1–3 m tall and bears ellipsoid, about 1–2 cm in diameter fruits. The flowers are purple/blue with bell-shaped or tubular sepals which forms short, triangular lobes. They open in summer season. Leaves are deciduous, grey-green, 7 cm in length and 3.5 cm broad. The branches are thorny. They are rounded or blunted at tips. It is an excellent choice for temperate climates. They perform well in moist, well-drained soils. The plant has the life span of 4-5 years.

Goji berry fruits are 1-2 cm in diameter, ellipsoid and bright orange red. This fruit flavors the combination of cherries, raspberries and dates with mild taste. Each fruit contains 10-60 tiny yellow seeds. The fruits are available during July to October.

Goji berry is the fruit which possesses all essential amino acids and antioxidants along with the high amount of protein. They also possess vitamin C, carotenoids, twenty one minerals and rich in fiber. It provides 15 times more amount of iron than spinach. Goji berry is also called nutritional powerhouse as it contains zinc, calcium, selenium and others.

Goji berries possess various anti-bacterial, anti-inflammatory and antifungal properties which enhances the immune system. In traditional Chinese medicine, it is used to increase the longevity and strength. It is also a good source of Vitamin A, C, antioxidants, iron, potassium, zinc, iron and others. The dried berries assist to strengthen the immune system, improve liver function and protect eyesight.

Diabetes has become one of the common diseases nowadays. Diabetes can lead to various diseases such as obesity, cardiovascular disease, heart disease, ocular disease and stroke. The recent studies shows that the fruit extracts of Goji berries contain hypoglycemic properties. It also reports that the use of Goji berries helps to prevent diabetes without any side effects.

Cholesterol is the main cause for cardiovascular disease and heart diseases. Cholesterol restricts the flow of blood by forming a plaque inside the arteries and blood vessels which makes the heart to pump with force which leads to weak heart. The recent studies show that Goji berries helps to lower the LDL cholesterol level.

The presence of antioxidants in Goji berries prevents the formation of free radicals in the body because it can damage cells, tissues, cell membranes as well as DNA. The study made on the research reports that the intake of Goji berries reduces the medical conditions associated to the free radicals. The antioxidant also enhances the immune system. (1)

Goji berry also provides a healthy body and general well-being. The study shows that the intake of Goji berries promote the gastrointestinal functions along with lowering fatigue and stress. It also enhances the psychological and neurological performance. (3)

The Chinese people use Goji berry to cure cancer besides food. The scientific investigations on the extracts of Goji berry fruit shows that it possess anti-cancer properties. The test on human cancer cells shows that it could prevent the development of cancer cells and also the death of cells. (4)

Free radicals assault the body from inside and also damages the brain cells and neurons which is the cause for neurodegenerative diseases. This could be treated with the consumption of Goji berry. The extracts of Goji berry possess the neuroprotective activity. The research also reports it as a preventive medicine which also contains the anti-aging activities. (5)

The liver gets damage in the process of preventing itself from free radicals and physical damages. Goji berry is used in Chinese medicine as the treatment for liver diseases. The Goji berry extracts eliminates the free radicals from the liver and possess the protective properties. (6)

The Ultraviolet radiation leads damage to the skin as well as cancer which could be reduced by the consumption of Goji berries. The extract of Goji berry prevents the skin damage from UV rays. The studies show that Goji berries lowers the immune suppression and skin inflammation due to the presence of antioxidant properties. (7)

Goji berry is used in Chinese traditional medicine to reduce the stress and promote sleep. The research conducted on the human shows that Goji berry enhance the sleep without any side effects. (8)

In traditional Chinese medicine, Goji berry is used as an aphrodisiac. The scientific studies show that an aphrodisiac property lowers the damage to the testes and prevents stress caused by hydrogen peroxide which decreases the semen and sperm quality. (9)

The presence of antioxidants in Goji berries improves the eyesight and prevents the free radicals that cause cataracts, loss of eyesight and other eye ailments.

Goji berries may interact with the medications for blood pressure, diabetes and blood thinner warfarin. Those who are allergic to the peaches, tobacco, nuts and tomatoes, they might experience some allergic reactions to Goji berries. Pregnant and breast feeding women should avoid Goji berries because it possess chemical, betaine which leads to the miscarriage.