Trending
You are at:Home»Fruits»Watery Rose Apple facts and health benefits 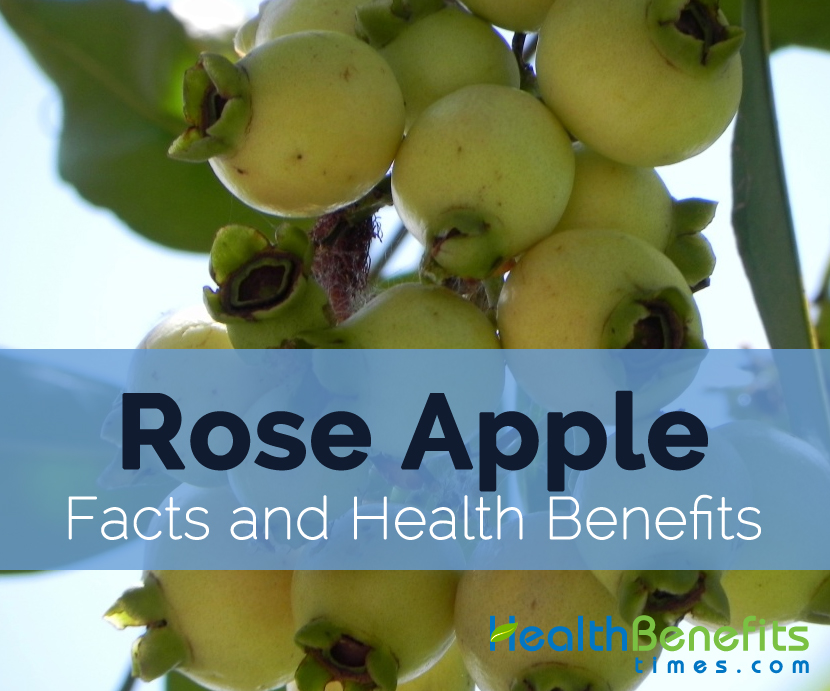 Historical reports suggest that the plant was originally indigenous to the Southeast Asian region, most probably the current country of Java, but with time, through the activity of traders, was distributed  to  other  parts  of the  world. Today, the  plant  is cultivated  in most  of the  tropical  countries,  including the  Indian  subcontinent   and  the  sub-Saharan  African regions  (Benin,  Democratic  Republic  of  Congo,  and Cameroon), as well as in South America and the warmer parts of America.

Probably it was originated to the East Indies and Malaya. Besides the inherent countries, it is also cultivated in Ceylon, India, Pacific Islands and Indochina.

The Watery rose apple tree grows to a height of 6 m to 15 m, and has a grayish-brown bark. The leaves are thin, narrowly lanceolate, coriaceous, spanning a length of 10 cm to 23 cm and a width of 2.5 cm to 5 cm, with along acuminate apex, cuneate base, and petioles measuring 0.5 to 1 cm in length. The ﬂowers are terminal with single-branched cymes of about 2 cm in length. A funnel form of hypanthium, measuring about 7 to 10 mm in length, is seen to narrow into a short pseudoterminal of 3 to 4 mm length. Two pairs of ﬂeshy, unequal, persistent, glabrous or sparsely puberulent sepals are present, one pair measuring about 6 to 8 mm in length and the other 4 to 6 mm. Four orbicular to ovate-orbicular concave petals with a white to greenish-white coloration are present (12 to 20 mm in length), along with long creamy white ﬁlaments (10 to 50 mm long). The tree bears whitish- to pinkish-yellow sub globose berries with a ﬂeshy pericarp (10 to 15 mm thick). Usually, a single sub globose seed is present, having a diameter of 2 to 2.5 cm and bearing testa closely coherent to the cotyledons.

The tree bears fruit from early winter to the late fall. The fruit is bell-shaped, about 5 to 8 cm long. The fruit is pink to red in color with white texture flesh. The color of the flesh differs in the type of cultivar grown. The fruits which are ripened have light and faintly aroma with moderate sweet taste. Each fruit possess one or two grey seeds. The fruit has got smooth and thin skin.

Watery Rose Apple is rich in Vitamin C which prevents the damage of free radicals, pollutants and toxic chemicals which leads to the health ailments such as heart disease, cancer and arthritis. Free radicals are developed in the body when the body is exposed to the radiation, tobacco or smoke and during the process of breaking down of food.

Vitamin C enhances the white blood cells production and also assists in the functioning. As Vitamin C is an antioxidant, it eliminates the oxidative damage and enhances the smooth functioning. It is also believed that Vitamin C effectively boosts the immune system to counteract the colds.

The presence of Vitamin C in the Watery Rose Apple lowers the chances of stroke and health ailments such as inflammation, oxidative damage, cardiac health, atherosclerosis, blood pressure and endothelial health. The research summarizes that the development of plaque in the body results in the stroke or heart attack which could be reduced with the Vitamin C. 22 mg of Vitamin C is obtained from 100 grams of Rose Apple.

Watery Rose Apple is the source of Niacin which is used to add cholesterol. The studies shows that Niacin enhances the HDL cholesterol levels and reduces the triglycerides and LDL cholesterol.

The research has shown that the use of Watery Rose Apple reduces the level of blood glucose by enhancing the activities of carbohydrate metabolic enzymes such as glucose-6-phosphate dehydrogenase, hexokinase and glucose-6-phosphatase.(1)

Dietary fiber in Watery Rose Apple supports the digestive system in the material movement and stimulate stool which is helpful for those having the irregular stools or constipation. It supports in healthy weight and reduces the chances of heart disease and diabetes.

Watery Rose Apple also possess adequate amount of potassium which enhances the strength of muscles and reduces the muscle cramps which is lead due to the low level of potassium.

An adequate amount of Vitamin A and C could be obtained from the Watery Rose Apple which helps to prevent the damage from the oxidative stress caused from the poor diet, stress and pollution. It also reduces the dryness of the skin and reduces the wrinkles.

Pre clinical studies have shown that an extract prepared from the bark of the Watery Rose Apple was effective against Staphylococcus aureus, Yersinia enterocolitica, Staphylo­ coccus hominis, Staphylococcus cohnii, and Staphylococ­ cus warneri. A phytochemical correlation suggests that the observed effect is due to the presence of increased amounts of tannin. An extract prepared from the leaves is also reported to be useful against A. faecalis, A. hydrophilia, B. cereus, and S. aureus.

Studies have also shown that the phytochemicals friedelin, beta-amyrin acetate, betulinic acid, and lupeol, isolated from bark, are effective against the dermato phytes Microsporum audouinii, Trichophyton mentagro­ phytes, and Trichophyton soudanense. The ethanolic extracts of the leaf were also observed to be effective against Mycobacterium smegmatis. Additionally, the leaf extracts showed potent antiviral effects against herpes simplex virus types I and II and on the virus involved in vesicular somatitis. Recent studies have also shown that the leaf extract possesses potent antibacterial effects against Propionibacterium acnes, the organism responsible for acne.

Chronic or recurrent inﬂammation in the tissues results in oxidative stress, and this may play a contributory role in the initiation and/or progression and promoting of cancer cell growth. Regular administration of non-steroidal anti-inﬂammatory drugs (NSAIDs) reduces the risks of certain cancers, thereby asserting the fact that modulation of cellular signaling involving chronic inﬂammatory response by anti-inﬂammatory agents offers an important strategy in molecular target-based chemoprevention and cytoprotection. However, long-term administrations of NSAIDs can cause ulcerations on the gastrointestinal tract, which may become a major clinical problem.

Pain is deﬁned as an unpleasant sensory and emotional experience associated with actual or potential tissue damage, or described in terms of such damage. The sensation can be characterized as a multi-dimensional experience in which several components are involved: motivational, emotional, sensory-discriminative, affective, and cognitive. The analgesic drugs currently in use are either narcotics or non- narcotics, and have proven side effects and toxic effects. There is a need, therefore, for non-toxic agents that are safe and preferably of dietary origin. Avila-Peña et al. evaluated the analgesic potential of the hydro- alcoholic extract of the leaf of rose apple, using the standard hot plate and formalin tests, in rats. Additionally, the observed analgesic effect was enhanced by naloxone, suggesting a possible additive effect.

An antioxidant restricts the molecules oxidation which damages the cells because of the production of free radicals which could be eliminated with Selenium, vitamin C, Lycopene, Beta Carotene, Vitamin E, Zeaxanthin and Lutein. Free radicals are the cause of various ailments such as Cataracts, Alzheimer’s disease, Cancer, Parkinson’s disease, diabetes, heart disease and cancer.

b. The report which was published by American Journal of BioScience summarizes that the barks of Roseapple assist to prohibit the free radicals. As a result, this plant could be studied due to its potential of bioactivity for discovering the efficacy of its use as a medicine. (3)

Acne vulgaris is a skin condition which leads to the inflammation caused due to the skin infection. The research shows that the leaves of Rose Apple possess the anti-acne properties such as anti-inflammatory, antioxidant and antibacterial properties. The experiment also shows that the presence synergic actions results the antioxidant, antibacterial and anti-inflammatory activities. Thus, S. jambos assist in the anti-acne activities. This study helps to know about the herbal medicines whereas various clinical trials are being continued. (4)

Liver damage leads to the various liver diseases which are caused due to the excessive consumption of alcohol, anemia, malnutrition, infection and hepatotoxic drugs. The research which was conducted by Gujarat Ayurved University shows that the leaves extract of Watery Rose Apple contains the liver protective agent. It leads to the efficacy in the change in function of liver than the disease control group. The efficacy was worthy of comparison to the standard drug. (5)

The decoction made from astringent bark is used in folkloric medicine of Malaysia to treat thrush.

It is served as salad at the childbirth ceremony. In India, the fruit is also used as a tonic to enhance the liver and brain.

The fever could be lessened from the sweetened prepared from the flowers.

The decoction made from the leaves acts as an expectorant and diuretic which treats rheumatism and also cures the sore eyes.

The health conditions such as dysentery, catarrh and diarrhea could be treated with the use of seeds. The people of Nicaragua use the infusion of roasted and powdered seeds to treat diabetes. The Colombia people believe that the seeds possess the pain killer properties.

The root is used by the people of Cuban to treat epilepsy.

Watery Rose Apple could be consumed raw or preserved in the form of jellies and jams. It is also added in the desserts. It is also used to make the fruit sauce or syrup.

Watery Rose Apple possess the risk of toxicity. The seeds and roots are poisonous. The leaves, roots and stems of the plant contain the mysterious amount of cyanide or prussic acid or hydrocyanic acid which is could be harmful.