Food sources and Facts of Niacin 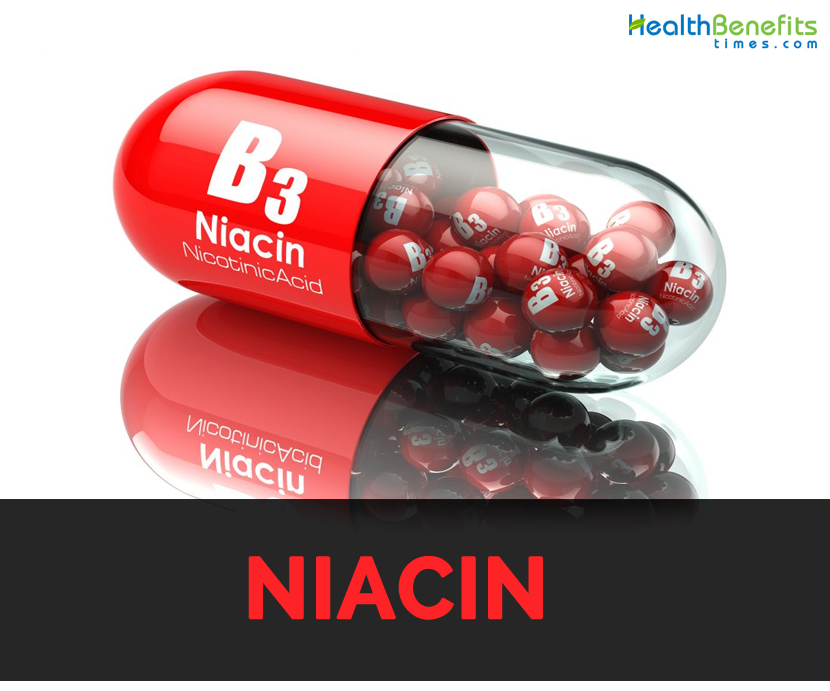 Niacin is more commonly recognized as vitamin B3 and is part of the B-complex vitamins. Niacin in its two forms, nicotinic acid and nicotinamide, is active in the body as part of co-enzyme structures that participate in many bodily activities. In addition to niacin’s fundamental role in nutrition, higher levels of niacin can be used therapeutically to lower blood cholesterol levels.

Vitamin B3 is a third water soluble vitamin that has been discovered playing a vital role in overall development of the body and its deficiency could lead to problems related with skin, brain functions and digestion. It is an essential human nutrient with formula C6H5NO2 belonging to the group of the pyridinecarboxylic acid. Niacin could be obtained from diet of various whole and processed foods. The supplementation and medication of niacin are used for treating pellagra and high blood cholesterol. Niacin deficiency causes skin & mouth lesions, nausea, headaches, anemia and tiredness. In pandemic deficiency disease, lack of niacin with vitamin C, vitamin D, thiamin and Vitamin A could be observed.

It is colorless and is a derivative of pyridine having carboxyl group (COOH) at the 3-position. Vitamin B3 in other forms include corresponding amide nicotinamide (niacinamide), where carboxyl group is replaced by carboxamide group and more complex amides and various esters.

In 1873, niacin was first described by Hugo Weidel who is a chemist in is studies of nicotine. For the first time, Casimir Funk extracted Niacin but he thought to be thiamine and with the discovered amine group he coined term “vitamine”. It was extracted from livers by Conrad Elvehjem, a biochemist in 1937 who identified active ingredient later referring pellagra preventing factor and anti-blacktongue factor. The studies conducted in Cincinnati and Alabama, Dr. Tom Spies discovered nicotinic acid as a cure for sufferers for pellagra.

Niacin is named to be Vitamin B3 as it was the third B vitamin that is discovered. Historically, it is referred as “vitamin P-P”, “vitamin PP” and “PP-factor”, which is derived from the name pellagra preventive factor. In 1951, carpenter found niacin in corn unavailable biologically and could be released in alkaline lime water of pH 11. Altschul and colleagues in 1955 described Niacin with lipid lowering property.

Let us discuss on the health benefits which Niacin offers:

Serious niacin deficiency causes health problems such as weak muscles, digestive issues, pellagra or skin irritability. People have to incorporate high supplements of niacin to the diet or alleviating these conditions. So people with this condition should increase the intake of Vitamin B3.

Niacin assists in management of cholesterol by lowering the chances of heart problems. Also lowering oxidative stress and inflammation which is harmful for cardiovascular health as it harden arteries and block the flow of blood. Vitamin B3 helps to expand blood vessels by promoting blood circulation and builds overall function of cardiovascular system. Niacin dilates blood vessels and promotes blood flow.

Supplements of Vitamin B3 help in treating depression, mood disorders and anxiety. Depressed people lack niacin in their body. Moreover, low neurotransmitter serotonin levels results to depression and serotonin requires amino acid tryptophan that is produced with the help of niacin.

Vitamin B3 is known for its ability to treat high blood sugar levels and diabetes symptoms. Major diabetics effectively regulate HBA1C levels with vitamin B3. Women should have 15 to 18 mg of niacin per day. Those who use sleeping pills might cause deficiency in Vitamin B3. For men, it is recommended to have 15 to 19 mg per day and children are recommended to have 9 to 13 mg dosage of Vitamin B3 per day. One should use niacin under the supervision of health practitioner.

Study has shown that Vitamin B3 helps in lowering symptoms of osteoarthritis by promoting mobility of joints and lowers the need for NSAIDs. Research conducted on lab rats resulted that injection of Vitamin B3 reduced inflammation related with arthritis. Further research is still required for making solid conclusion.

Niacin is found to be helpful for blood fats as it lowers triglycerides by about 20 to 50%. It terminates the action of enzyme involved in process of triglyceride synthesis. It lowers LDL and VDL production eventually. Curative doses are needed to obtain these benefits on cholesterol and triglycerides level.

Niacin assists in protecting skin cells from sun damage whether applied topically (in form of lotions) or used orally for the skin. Latest research shows that Niacin is effective in preventing various skin cancers. Vitamin B3 is commonly used in cosmetics or creams for its anti-aging properties. It also reverses sun damage or discoloration which occurs due to ageing. Being a multi-tasking vitamin, it heals wounds, intensify skin and stimulate power for retaining moisture.

Niacin helps to form sex hormones for people with sexual disorders such as impotence and erectile dysfunction.

What foods contain Niacin and what is the supplemented form?

Niacin is found in most foods. Brewer’s yeast, fish, pork, poultry, beef, potatoes and mushrooms are loaded with high content of niacin. Niacin found in foods is found to be stable in most forms of cooking and storage. Some losses might occur during boiling of foods and thaw drip. Some niacin can dissolve into the water which is eventually drained from the food. Both nicotinamide and nicotinic acid can be used to formulate nutrition supplements, yet nicotinamide is the form used in food fortification.

How much Niacin do we need?

RDA for an adult women and men is 14 and 16 mg or niacin equivalents (NE) respectively for preventing deficiency and provide for good status. The recommendation during pregnancy and lactation increases to 18 and 17 mg respectively. As niacin is required for energy operations, it is appropriate to express recommendations for more athletic people on the basis of level of additional calories burned during exercise and sport training or competition. For instance, 6.6 grams of niacin would be recommended for every 1,000 calories spend daily. Thus an athlete who spends 3,000 to 5,000 calories daily is recommended from 20 to 35 milligrams.

Where is Niacin found in our body?

Niacin found in foods is well absorbed from small intestine and is found in every cell. Alike riboflavin, we could find high concentrations of Niacin in metabolically active tissue and those tissues with high energy demands such as brain, heart, skeletal muscle and liver. Niacin is lost from body as urine.

What Does Niacin Do in the Body?

Niacin also allows coenzyme activity to our cells. Literally, various chemical reactions rely on Niacin to proceed. Niacin in form of NAD (nicotinamide dinucleotide) during aerobic energy is a carrier of electrons from energy pathways to the electrontransport chain. It is a part of another electron transferring molecule known NADP(nicotinamide dinucleotide phosphate). NADP transfer electron between molecules and is essential for making cholesterol and fatty acids.

What happens if too much Niacin is consumed?

About 100 milligrams of Niacin as nicotinic acid results in uncomfortable feeling. Itching and headache are common are followed by an increase in flow of blood to skin. Physicians prescribe niacin 2 to 5 grams/day for lowering blood cholesterol. Niacin in gram doses provide pharmaceutical effect but it should not be practiced unless with medical supervision.

What happens in Niacin deficiency?

Niacin is required for various roles in energy processes and deficiency of niacin lowers the efficiency of energy systems. The symptoms of niacin deficiency comprises a low appetite, general feeling of weakness and weight loss. The deficiency of niacin leads to severe disease known as pellagra indicated by diarrhea, dermatitis and dementia and possibly leading to death.

Food sources and facts of Choline