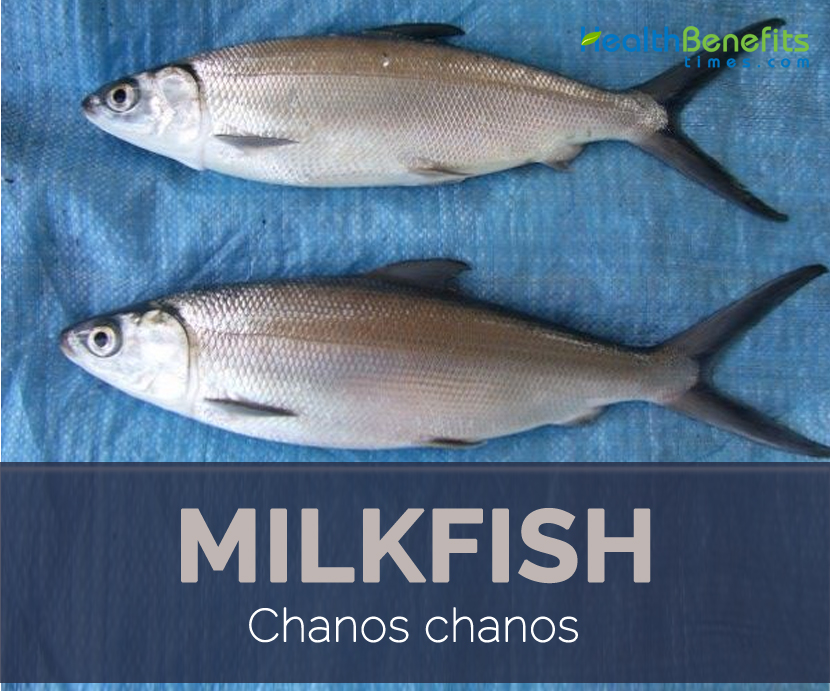 Milkfish (Chanos chanos) also known as bandeng or bangos is the sole living species in the family Chanidae. It is a silver colored Pacific salt water fish that lays its eggs in shallow coastal waters and can withstands low salinity water. It is a popular fish in Southeast Asia and lives in the Indian Ocean and the Pacific Ocean and to live as a group around the edges of islands and coral islands. Young fish commonly live for 2-3 weeks at sea and then move to the mangrove swamp with salt water, occasionally to a watery salty lake. Milkfish will go back into the ocean when mature and can breed again. It is a source of animal protein, B-complex vitamins and selenium, but it is also a significant source of fat, saturated fat, cholesterol and calories.

Milkfish are usually found along the coasts of continents or islands, particularly where reefs are well developed. They also occur in large coastal lagoons. Milkfish are found in tropical waters, rarely in waters that are affected by cold ocean currents. They are found in clear, shallow, saline, and warm waters above 20°C. Adult milkfish also occur in freshwater lakes in the Philippines, Indonesia, and Madagascar. Juveniles are found in large coastal lagoons, atolls, and freshwater lakes. The depth range of the milkfish is 0 to 30 m.

Milkfish is overall herbivorous, because it does not have any teeth. It nibbles on small plankton, algae, diatoms, and plants. It also often enters into shallow areas to find food, and occasionally eats small invertebrates or fish, while it tries to nibble on algae, and plants.  When this fish is farmed in the fish pen, due to the lack of food, it starts eating the eggs and the larvae that are in the fish pen.

Milkfish aquaculture first occurred around 800 years ago in the Philippines and spread in Indonesia, Taiwan, and into the Pacific. Traditional milkfish aquaculture relied upon restocking ponds by collecting wild fry. This led to a wide range of variability in quality and quantity between seasons and regions.

In the late 1970s, farmers first successfully spawned breeding fish. However, they were hard to obtain and produced unreliable egg viability. In 1980, the first spontaneous spawning happened in sea cages. These eggs were found to be sufficient to generate a constant supply for farms.

Milk Fish is one of the healthy and nutritious fish first occurred around 800 years ago in the Philippines and spread in Indonesia, Taiwan, and into the Pacific. The fish is loaded with omega 3 fatty acids and protein which is quite essential for proper functioning of the body. Listed below are some health benefits of milkfish:

Regular consumption of milkfish helps in the development of the brain and memory of children, prevents heart disease, controls cholesterol levels, nourishes the eyes, and reduces depression. Apart from that Omega 3 is good for pregnant women to increase breast milk and the quality. Children who are born will be healthier and smarter.

Milkfish is a popular fish in Southeast Asia. Bandeng or bangos are the common names of milkfish that is a silver-colored Pacific salt-water fish that lays its eggs in shallow coastal waters and can withstand low-salinity water. They have an elongate and almost compressed body, with a generally symmetrical and streamlined appearance, one dorsal fin, falcate pectoral fins and a sizable forked caudal fin. Mouth is small and toothless. Body color is olive green, with silvery flanks and dark bordered fins. These fishes generally feed on cyanobacteria, algae and small invertebrates. The young fry live at sea for two to three weeks and then migrate during the juvenile stage to mangrove swamps, estuaries, and sometimes lakes, and return to sea to mature sexually and reproduce. Females spawn at night up to 5 million eggs in saline shallow waters.