Trending
You are at:Home»Poultry & Seafoods»Mackerel fish health benefits and facts 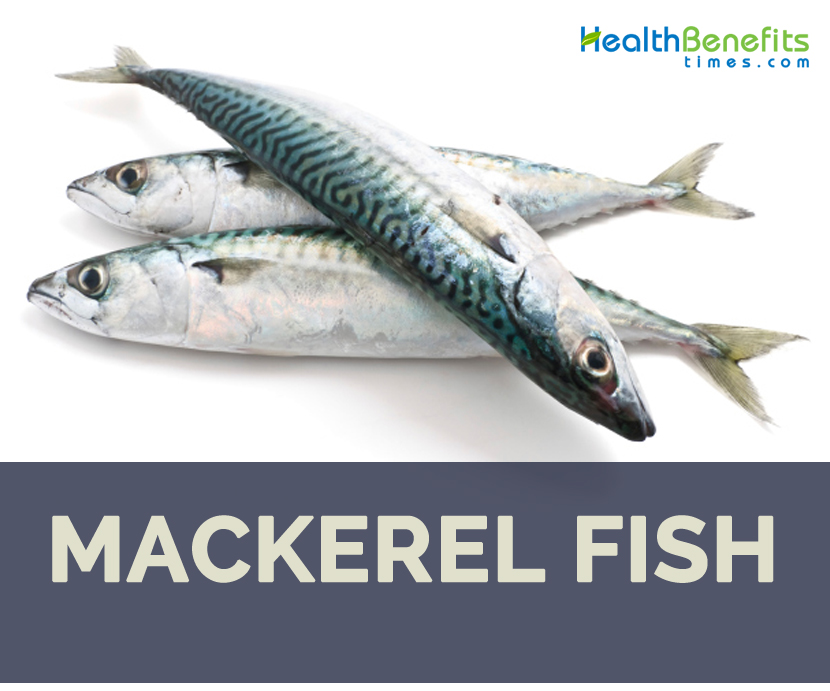 Mackerel is a slim fish with a cylindrical shape and it has a strong flavor. The slim torpedo-shaped fish is found in deep temperate and tropical waters. These fish are iridescent blue-green above with a silvery underbelly and twenty to thirty near vertical wavy black stripes running across their upper body. It has two widely separated dorsal fins and numerous finlets (small fins) on a dorsal and lateral side of the body. Tail is shaped like fork. The mackerel is known for their oil meat and slim shape. Many of the mackerel’s healthy benefits are derived from its oily meat which contains lots of omega-3 fats.

Mackerel is known as a very healthy fish and regular consumption is very good for overall health. It is famous for the heart health benefits it provides and also, known for making the blood clean and fresh. One should buy mackerel that is firm and bright, gills should be clean and the skin moist with shiny scales. Ideally, this fish should be eaten within couple of days because its skin disintegrates quickly. Mackerel is an important food fish that is consumed worldwide. As an oily fish, it is a rich source of omega-3 fatty acids. The flesh of mackerel spoils quickly, particularly in the tropics, and can cause scombroid food poisoning. Accordingly, it should be eaten on the day of capture, unless properly refrigerated or cured.

The upper surface of Mackerel fish is dark steely to greenish blue, often almost blue-black on the head. The body is striped with 23 to 33 (usually 27 to 30) dark transverse bands that run down in an irregular wavy course nearly to the mid-level of the body, below which there is a narrow dark streak running along each side from pectoral to tail fin. The pectorals are black or dusky at the base, the dorsal and caudal are gray or dusky. The jaws and gill covers are silvery. The lower parts of the sides are white with silvery, coppery, or brassy reflections and iridescence; the belly silvery white. But the iridescent colors fade so rapidly after death that a dead fish gives little idea of the brilliance of a living one.

Most of the grown fish are between 14 and 18 inches long; a few reach a length close to 22 inches. Fourteen-inch fish weigh about 1 pound in the spring and about 1¼ pounds in the fall when they are fat; 18-inch fish weigh about 2 to 2½ pounds; a 22-inch mackerel will likely weigh 4 pounds. An unusually large mackerel is taken occasionally; in 1925, for example, the schooner Henrietta brought in one weighing 7½ pounds.

Different varieties of Mackerel fish are mentioned below 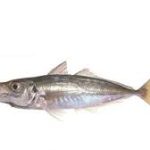 The Atlantic horse mackerel is a species of jack mackerel in the family Carangidae. It gets its common name from the legend that other smaller species of fish could ride on its back over great distances. Other common names include European horse mackerel (in the U.S.), common scad, scad, and saurel.

Wahoo is a scombrid fish found worldwide in tropical and subtropical seas. It is best known to sports fishermen, as its speed and high-quality flesh make it a prize game fish. In Hawaii, the wahoo is known as ono. Many Hispanic areas of the Caribbean and Central America refer to this fish as peto.

The king mackerel or kingfish is a migratory species of mackerel of the western Atlantic Ocean and Gulf of Mexico. It is an important species to both the commercial and recreational fishing industries. 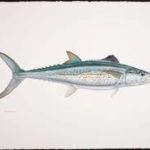 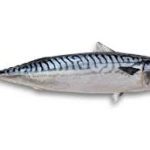 The Atlantic mackerel is a pelagic schooling species of mackerel found on both sides of the North Atlantic Ocean. The species is also called Boston mackerel, Norwegian mackerel, Scottish mackerel, or just mackerel. 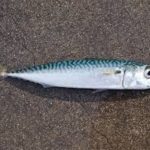 The blue mackerel, Japanese mackerel, Pacific mackerel, slimy mackerel, or spotted chub mackerel is a fish of the family Scombridae, found in tropical and subtropical waters of the Pacific Ocean from Japan south to Australia and New Zealand, in the eastern Pacific (Hawaii and Socorro Island, Mexico), and the Indo-West Pacific: the Red Sea, the Persian Gulf, the Gulf of Oman and the Gulf of Aden, in surface waters down to 200 m (660 ft.). Its length is between 30 and 65 cm (12 and 25.5 in), and weighs a little over 1 kilogram (2.2 lb.).

Scomberomorini is a tribe of ray-finned saltwater bony fishes that is commonly known as the Spanish mackerels or seerfishes. This tribe is a subset of the mackerel family (Scombridae) – a family that it shares with three sister tribes, the tunas

, mackerels, and bonitos, and the butterfly kingfish. Scomberomorini comprises 21 species across three genera. 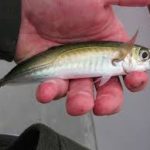 The Pacific jack mackerel (also known as the Californian jack mackerel or simply jack mackerel), is an abundant species of pelagic marine fish in the jack family, Carangidae. The species is distributed along the western coast of North America, ranging from Alaska in the north to the Gulf of California in the south, inhabiting both offshore and inshore environments. The Pacific jack mackerel is a moderately large fish, growing to a maximum recorded length of 81 cm, although commonly seen below 55 cm. 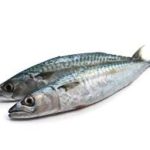 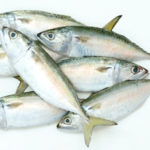 The Indian mackerel is a species of mackerel in the scombrid family (family Scombridae) of order Perciformes. It is commonly found in the Indian and West Pacific oceans, and their surrounding seas. It is an important food fish and is commonly used in South and South-East Asian cuisine.

The Pacific sierra also known as the Mexican sierra, is a ray-finned bony fish in the family Scombridae, better known as the mackerel family. More specifically, this fish is a member of the tribe Scomberomorini, the Spanish mackerels.

The short mackerel or shortbodied mackerel is a species of mackerel in the family Scombridae. Its habitat is the shallow waters of Southeast Asia and Melanesia, feeding mainly on small zooplankton. It is of major importance in the fisheries industry.

The Australian spotted mackerel is a species of fish in the family Scombridae. Common fork length ranges between 50 to 80 cm. Specimens have been recorded at up to 104 cm in length, and weighing up to 10.2 kg. It is found in the western Pacific, along the northern coast of Australia, from the Abrolhos Islands region of Western Australia to Coffs Harbour and Kempsey in central New South Wales.

Mackerel commonly known as bangada in Hindi, is one of the most extensively consumed fish variety in India as well as throughout the world. Although bangada fry and curry are most preferred options, health conscious people can consume this fish in baked, steamed or grilled form. Packed with omega-3 fatty acids and high amount of proteins, consuming this fish offers a wide range of health benefits. The two most important long-chain fatty acids in mackerel are eicosapentaenoic acid (EPA) and docosahexaenoic acid (DHA). They are mainly found in fish oil and fatty fish, but also seafood, algae, and algae oil. Here are few of the reasons why you should start eating mackerel fish

One of the most effective methods to prevent heart disease is to consume diet containing good amounts of omega 3 fatty acids. Mackerel fish is not only rich in monounsaturated fatty acids and polyunsaturated fatty acids but also is also low in saturated fats. Hence frequent consumption of this fish helps to lowers your risk of heart complications like stroke, atherosclerosis, heart attacks and arrhythmia.

Mackerel consists of good amount of healthy fats namely monounsaturated fatty acids (MUFA) which play a key role in the prevention, as well as control of blood sugar levels in diabetics. Consuming this fish on a regular basis not only controls blood sugar levels in the body, but it also lowers visceral fat, thus lowering your risk of diabetes.

Mackerel strengthens the immune system. It supports the functions of organs that have been weakened by sickness. Omega-3 fatty acids act as an anti-inflammatory agent. They help in the management of arthritis. They also help to lower the risk of some cancers and heart disease. Coenzyme Q10 protects cells from damage that increases the risk of cancer. It also boosts the body’s capacity to fight infections. It is a great item to be included in the diet of convalescents and those undergoing various treatments

In case you are a non-vegetarian by nature and suffer from hypertension, consume mackerel fish on a daily basis to keep your blood pressure levels within control. High levels of potassium present in this fish helps in maintaining normal blood pressure in addition to lowering the risk of health complications associated with the condition.

Mackerel consists of anti-inflammatory compounds which help in lowering the joint pain and stiffness of muscles in people suffering from rheumatoid arthritis. Including this fish in your diet while on medication is found to improve your condition by enhancing the efficacy of the drugs.

Mackerel fish is rich in coenzyme Q10, antioxidants, and omega-3 fats. Coenzyme Q10 help get rid of cancerous agents attached to cells; antioxidants can help lower risks of cancer by eliminating free radicals in your body; omega-3 fats can help prevent breast, prostate, renal and colon cancers. Apart from that mackerel fish is also rich in vitamin B12 and selenium that are helpful in treating cancers.

Content of omega 3 in the puffer fish is believed to help people lose weight. Research has shown that regular consumption of fish oil bloating combined with regular exercise can reduce abdominal fat expressively. It can also help regulate the body’s metabolism, and can help reduce blood sugar in overweight people.

Fish oil found in mackerel helps lower your bad cholesterol particles, and increase your good cholesterol levels. The fish oil works by preventing cholesterol from being absorbed in the intestine, which at the mean time can also help lower blood pressure.

Research studies have proved that people consuming high levels of omega-3 fatty acids are at a lower risk of getting affected by depression. Therefore, by adding mackerel to your daily diet, this food not only aids in reducing mood swings common in individuals suffering from depression, but it also improves the activity of antidepressant medications. Mackerel is overloaded with DHA (Docosahexaenoic acid) and consuming this fish lowers your chances of suffering from Alzheimer’s disease and Parkinson’s disease.

Mackerel is one of the very few natural sources containing good amounts of vitamin D that is known to up the survival chances of bowel cancer patients. Research studies have proved that cancer patients with high blood levels of vitamin D are more likely to survive the disease, in addition to improving their health condition.