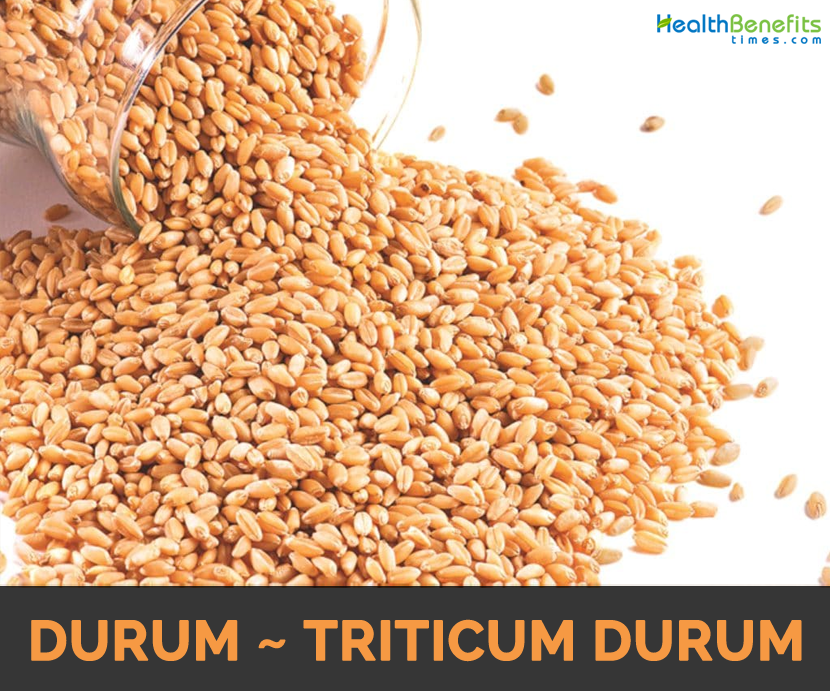 Durum wheat scientifically known as Triticum durum is an annual grass in the Poaceae (grass family) native to the Mediterranean region and southwest Asia, which is one of several species of cultivated wheat, now grown in temperate climates worldwide for its cereal grain, which is one of the top two cereal crops grown in the world for human consumption, along with rice (Oryza sativa). It is the second most cultivated species of wheat after common wheat, although it only represents 5% to 8% of global wheat production. Other Common names of durum are Durum wheat, hard wheat, pasta wheat and Macaroni wheat. Durum thrives in a climate characterized by cool summer nights, long warm days, adequate but not excessive rainfalls and a dry harvest. It is the hardest of all wheat.

Durum wheat (Triticum durum) is one of the oldest cultivated cereal species in the world. The earliest wheat, dated to approximately 10,000 years BP, were domesticated in the Fertile Crescent, a region extending from the coast of Israel to South-eastern Turkey and westwards through Syria, Iraq and western Iran (Feldman 2001). Durum wheat spread from this region westward into the Mediterranean basin, reaching the Iberian Peninsula around 7,000 years BP. It is widely accepted that durum wheat entered to North Africa and the Iberian Peninsula from the South of Italy. However, recent findings based on the genetic similarities between landraces (LR) from the Maghreb countries and those from Spain and Portugal have suggested North Africa as an additional route for wheat introduction in the Iberian Peninsula.

Wollaroi, EGA Bellaroi, Jandaroi and Caparoi are varieties released from the NSW DPI’s durum breeding program at Tamworth. They all have very good grain quality and are resistant to stem and stripe rusts, and have a useful to high level of yellow spot and leaf rust resistance, but are very susceptible to crown rot. They all have good resistance to lodging and shattering.

Wollaroi has excellent semolina color and good dough strength. Pasta made from Wollaroi has a superior bright, clear yellow appearance. Wollaroi is somewhat quicker maturing than Hartog in southern Queensland. However it is earlier maturing in Central Queensland, flowering about seven days earlier than Hartog. Wollaroi has good resistance to black point, but is only moderately tolerant to root lesion nematodes and is not suggested for nematode infested soils.

EGA Bellaroi has superior semolina and pasta quality with bright, clean, yellow appearance and no discoloration. It has a high level of resistance to stem rust, stripe rust and yellow spot. It is moderately susceptible to leaf rust. EGA Bellaroi is moderately tolerant to root lesion nematodes, but very susceptible to crown rot. It has very good black point and lodging resistance. EGA Bellaroi is a long season variety and should be sown as early as possible, particularly in Central Queensland.

Jandaroi has superior semolina and pasta quality with bright, clean, yellow appearance and no discoloration. It has a high level of resistance to stem rust, leaf rust and stripe rust. Moderately resistant-moderately susceptible to yellow spot, but is very susceptible to crown rot. Jandaroi is very quick maturing and has grain yields equivalent to Kennedy in Central Queensland. It has very good black point and lodging resistance.

Caparoi is a mid-season variety with excellent yield potential. Grain quality is better than Wollaroi, similar to Jandaroi but slightly lower than EGA Bellaroi. Caparoi has improved dough strength compared to EGA Bellaroi. It has a high level of resistance to stem rust; stripe rust and yellow leaf spot. Caparoi has good lodging and shattering resistance.

It is a mid-season maturing variety with excellent yield potential. It has a good resistance to stem rust, leaf rust and stripe rust, but moderately susceptible to yellow spot.  It may lodge under irrigation or high yielding conditions.

Durum wheat flour is a rich source of many important nutrients. It contains dietary fiber, vitamin B-complex, vitamin E, minerals and zero in fat, saturated and trans fat. It is also low in cholesterol and sodium. Including durum wheat products as a part of your diet provides your more balanced nutrients intake. Listed below are few of the health benefits of Durum Wheat

Durum wheat product could be a top selection for individuals with diabetics due to its low glycemic index. Compared to subtle white flour, durum flour is digestible and absorbs at a slower rate. Similarly, this helps to reduce the glucose surge when a meal and permits individuals with diabetes to regulate their blood glucose levels a lot of effectively.

Durum wheat flour could be a made supply of the many necessary nutrients. It contains dietary fiber, victuals B-complex, vitamin E, minerals and nil in fat, saturated and trans fat. Similarly, it’s conjointly low in cholesterol and sodium. Together with durum wheat merchandise as a neighborhood of your diet provides you a lot of balanced nutrients intake.

Products made of health benefits of durum flour are digested slowly. This helps you are feeling full longer and anticipate you from overeating. Ingestion slices of bread and a bowl of spaghetti provide your whole different feeling of satiety. Similarly, breadstuff contains quick comestible starch which is able to be rapidly empty from your abdomen, digestible and absorbed into your bloodstream. On the opposite hand, food includes a slower digestion and maintained in your alimentary canal for an extended time. Meanwhile, selecting merchandise created with durum flour over those created with refined white flour can assist you to cut back your food intake.

Durum health benefits are made in B-complex vitamins, particularly the folate and thiamine. In general, B-complex vitamins are required for healthy skin, hair, eyes and liver. Also, sufficient intake of B-complex is important to support our metabolism and energy production. Thiamine helps to take care of the health of your brain and nerves system. Similarly, B vitamin supports the regeneration of red blood cell in our body.

6. Rich in Antioxidant and Iron

Durum is additionally a decent supply of essential minerals, like antioxidant and iron. Antioxidant acts as an inhibitor in our body to prevent harmful oxidization harm of our cell membranes and DNA. Temporarily, selenium conjointly strengthens our immune system to forestall infection. A serving of durum flour provides 37 mg of selenium that equals to 2/3 of counseled daily intake.

Durum consists of potassium and is low in sodium. Also, every one hundred grams of durum contains 186 mg of potassium that is 4wd of the daily demand. Potassium is vital in supporting heart operate. Meanwhile, it keeps a standard electrolytes balance between cells and body fluid and keeps the guts beating at a standard rhythm by lowering blood pressure. Moreover, the antioxidant content of durum flour protects our heart from infections.

Durum could be a smart supply of essential minerals. 100 grams of durum flour consists of 17 mg calcium and 47 mg magnesium. Similarly, each calcium and metal has an oversized presence in bone. Calcium will increase the bone density. Magnesium guarantees the strength and firmness of the bone. Sufficient metal is additionally necessary for nerve conductivity and also the solution balances of the system. Meanwhile, the trace metal zinc could be a bio factor to essential roles within the central system across the lifetime from early baby brain development and also the maintenance of brain operate in adults. Overall, the phosphorus, zinc and metal of durum benefits are necessary for the upkeep of a decent system.

Durum flour, semolina, is actually a coarse and fiber-rich particle. Every serving of durum flour consists of one g of fibers that provides 4wd of the daily price. Similarly, the soluble fiber of durum helps to slow digestion.