Food sources and Facts of Riboflavin 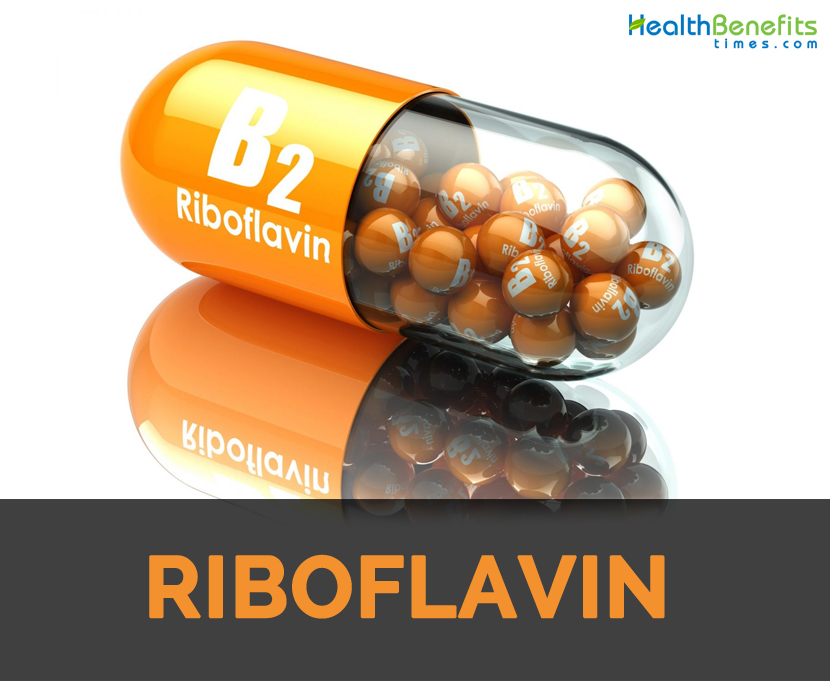 Riboflavin named Vitamin B2, is a B-complex vitamin which is found in foods and used as a dietary supplement. The sources of food for riboflavin includes milk, green vegetables, eggs, meat, almonds, mushrooms and other dairy products. It plays a key role in energy metabolism. The name riboflavin refers both to a component of its molecular structure and also its yellow color: ribo- with respect to the ribose (a simple sugar) portion of the molecule and flavin from the Latin word for yellow, flavus. Riboflavin is an orange to yellow compound with three ring structure and two nitrogens in each of two of rings. It has chemical formula C17H20N4O6 and has melting point at 290°C. Vitamin B2 could be rapidly broken down by heat and upon the exposure to light; it converts to lumiflavin, being a compound that sabotage Vitamin C. The IUPC name of Riboflavin is 7,8-dimethyl-10- ((2R,3R,4S)- 2,3,4,5-tetrahydroxypentyl) benzo[g]pteridine-2,4 (3H,10H)-dione.

Vitamin B2 is a water soluble vitamin which is involved in number of oxidative enzyme systems in electron transport. It is a central component of two major coenzymes flavin adenine dinucleotide (FAD) and flavin mononucleotide (FMN) essential to all flavoproteins. These coenzymes has major role in cellular growth, function & development, energy production, metabolism of fats, steroids and fats. For the conversion of amino acid tryptophan to niacin requires FAD. Likewise, FMN is required for the conversion of Vitamin B6 to coenzyme pyridoxal 5’-phosphate. Vitamin B2 is required for various cellular processes. Moreover, riboflavin maintains normal levels of homocysteine which is an amino acid in blood.

What foods have Riboflavin?

Beef liver, green leafy vegetables, dairy products and beef are the sources of riboflavin. About one-fourth to one half of the riboflavin is obtained by Americans with an intake of milk and milk products. Meats are considered to be a primary supplier of dietary riboflavin along with fortified and enriched foods such as breads and breakfast cereals.

Is Riboflavin stable during cooking and storage?

Riboflavin seems to be more stable than Vitamin C and Thiamint with regard to cooking and storage. Foods lose important riboflavin losses when exposed directly to light. It was a bigger concern when milk was packaged in clear glass bottles and delivered to your doorstep before people got out of bed. The milk would then be exposed to the morning sunlight till it was brought in the house. The milk producers no longer packaged their product in glass bottles as this helped milk to retain most of its riboflavin. Cooking foods and sun drying in an open pot results to significant losses of riboflavin losses. In addition like other water-soluble vitamins, it could be washed away during boiling and thawing.

How much Riboflavin do we need?

For adults, RDA of riboflavin is 1.1 to 1.3 milligrams for adult women and men. RDA for pregnant and lactating women is 1.4 and 1.6 milligrams respectively. As Riboflavin is required in energy operations, it is appropriate to express recommendations for more athletic people based on level of additional calories burned during exercise or sport training or competition. About 0.6 grams of riboflavin is recommended for every 1,000 calories spend daily. Thus athlete spending 3,000 to 6,000 calories daily is recommended to have 1.8 and 3.6 milligrams.

Where is Riboflavin in our body?

Riboflavin found in foods is well absorbed from digestive tract. Riboflavin is available in most cells in the body. High concentrations are found in active tissues such as heart, kidneys and liver. This makes the clear view of riboflavin being heavily involved with aerobic energy metabolism. Typically, status of riboflavin is assessed by taking sample of blood and determining the activity of process which requires riboflavin for efficient operation. Being water soluble, riboflavin is lost from body in urine which makes obvious urine to look bright yellow short time after ingesting the supplements of riboflavin.

What happens if too little or too much Riboflavin is consumed?

Riboflavin deficiency occurs by itself. A person consuming diet low in riboflavin shows signs of deficiency after couple of months such as inflammation of mouth and tongue. Other signs may include cracking or dryness at corners of mouth, edema (accumulation of fluid in tissue), lesions on lips, neurological disorders, anemia and mental confusion. Still Riboflavin toxicity is not a great concern due to its accelerated removal from body in urine.

Riboflavin or Vitamin B2 is a water soluble vitamin required on daily basis for the body as it does not remain in the body. Being a vital nutrient, it plays a vital role in energy production by converting carbs into sugar which provides energy to various bodily functions. Moreover, vitamin has a major role in electron transport chain responsible for production of cellular energy. The antioxidant properties that it offers slow down the aging process.

Body utilizes riboflavin for metabolizing food into energy. It maintains proper nerve, digestive, brain and hormone function. Insufficient Vitamin B2 levels causes its deficiency and components found in protein, fat and carbohydrate foods are not digested thoroughly and utilized for fuel which keeps the smooth bodily functions. This is must for bodily repair and growth. Vitamin is essential for breaking down proteins into fats, carbohydrates and amino acids in form of glucose. It helps to deliver nutrients from food into usable body energy that supports to maintain healthy metabolism. Vitamin is essential for managing optimum thyroid and adrenal function. Likewise, the deficiency of Vitamin B2 promotes the chances of thyroid ailments. It helps to calm nervous system, control hormones managing appetite, energy, temperature, mood and combat chronic stress.

Vitamin B2 has a major level in maintaining collagen levels that is required for maintaining young skin and prevents the appearance of fine lines and wrinkles. This vitamin in low levels results premature aging. Studies suggested that Riboflavin speeds up the healing process, provides relief from chapped lips and skin inflammation and also slows down premature aging signs.

Riboflavin is required for producing new antibodies and red blood cells in the body that upgrades circulation and oxygenation to different body parts as well as organs.

Riboflavin is being confirmed to support the progression of pregnancy. This vitamin is often recommended by doctors for pregnant women with Vitamin A.

Vitamin B2 has a pivotal role in protecting and maintaining mucous membranes in digestive system.

As an antioxidant, Vitamin B2 is able to manage free radicals and its activities. It prevents the chances of heart disease and cancer. Vitamin B2 is asked for the production of antioxidant named as glutathione which acts as a free radical killer and for detoxification of liver. Free radicals make the body ages and if left uncontrolled leads to development of various problems. This vitamin defends diseases by maintaining healthy lining within digestive tract where abundant immune system is stored. Digestive system when healthy allows proper absorption and use of nutrients from diet we consume. This makes the view clear that insufficient riboflavin causes fewer nutrients to be used for energy in the body.

Anemia is caused due to the low production of red cells and being unable to deliver oxygen to blood and also blood loss. Vitamin B2 is engaged in these functions so helps to treat anemia. Along with it is also used for treating sickle cell anemia. Both of these conditions are caused due to the deficiency of riboflavin. Vitamin B2 demanded for steroid hormone synthesis and production of red blood cells. It assist in delivering oxygen to the cells and also to utilize iron. Those with riboflavin deficiency should add Vitamin B2 to the diet otherwise they would be prone to onset of anemia and sickle cell anemia. Vitamin B2 effectively lowers high amount of homocysteine in blood.

Discussed already Vitamin B2 as an antioxidant, it combats free radicals which are the contributor of cancer. This vitamin is required for producing antioxidant named to be glutathione that destroys damaging free radicals and also cleanses liver. Free radicals when left uncontrolled provokes tumor development and riboflavin is regarded to be helpful in counteracting these cancer contributors.