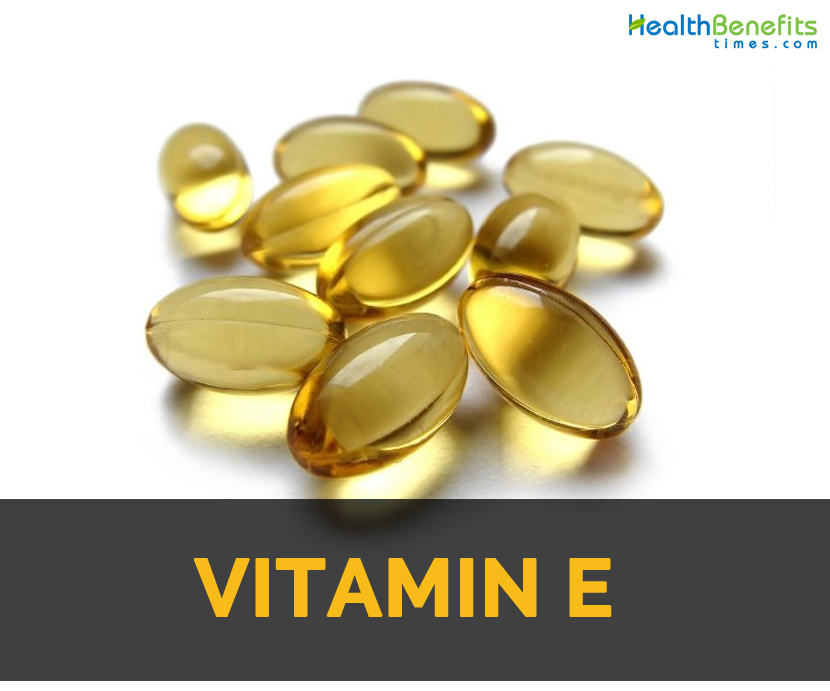 Alike other vitamins, vitamin E are not a single molecule but is a class of identical molecules achieving related activities. Vitamin E molecules are subdivided into two major classes such as tocotrienols and tocopherols which could be subdivided themselves. Vitamin E is an extensive lipid soluble component in cell antioxidant defence system and is particularly obtained from diet. It has various vital roles in body due to its antioxidant properties. Oxidation is associated to various possible diseases and conditions such as ageing, cancer, cataracts and arthritis. Vitamin E is effective against these problems. Vitamin E also prevents platelet hyperaggregation which could lead to atherosclerosis. Moreover, it lowers production of prostaglandins such as thromboxane that causes platelet clumping.

It is a group of fat soluble compounds which was discovered first by Evans and Bishop in 1922. These compounds have apparent antioxidant activities which is essential for health. Vitamin E is found in fat containing foods and with fat soluble property, it allows being stored within fatty tissues of humans and animals. This fat soluble vitamin exists in various forms in foods such as nuts, spinach, olives, sunflower seeds, mangoes, vegetable oils, asparagus, wheat germ and whole wheat breads. Alpha tocopherol is the most common form in Western diet. The vital chemical characteristic is antioxidant property found in foods which blocks addition of oxygen to fats which causes rancidity.

Here’s an educational article on how Hebert McLean Evans and Katharine Scott Bishop discovered Vitamin E in 1922 and in 1935, first isolated in pure form by Evans & Gladys Anderson Emerson at University of California, Berkeley. The activity of vitamin was first identified as dietary fertility factor  and it was given name tocopherol derived from Greek words “τόκος” (tókos, birth), and “φέρειν”, (phérein, to bear or carry) meaning in sum “to carry a pregnancy. Professor of Greek at the University of California, George M. Calhoun was credited with helping the naming process. In 1938, Erhard Fernholz get across its structure in 1938 & shortly afterwards, Paul Karrer and his team synthesized it first.

After Vitamin E discovered nearly 50 years an editorial in Journal of American Medical Association titled “Vitamin in search of disease” revealed many secrets of vitamin but no certain use and no definite deficiency disease in man”. The experiments on animal had been a requirement for successful pregnancy but no welfare was observed for women prone to miscarriage. The evidence found for vascular health is unconvincing. The editorial obstruct with mention of some preliminary human evidence for protecting hemolytic anemia in young children.

In 1946, the role of vitamin E in coronal is first projected for coronary heart disease. Then more cardiovascular activities for the same group research were followed which included a proposal that Vitamin E could slow down and reverse the onset of atherosclerosis.

Withal, meta-analysis of 2004 showed no link between supplementation of Vitamin E and cardiovascular events or cardiovascular mortality. It is believed that Vitamin E when applied topically is beneficial for wound healing and burn. Vitamin E’s role in infant nutrition has been a long research history. The trials were carried out from 1949 with premature infants which suggested that oral alpha-tocopherol was protective against intracranial hemorrhage, edema, retrolental fibroplasia and hemolytic anemia. The review of 2003 Cochrane conclude that supplement of Vitamin E in preterm infants lower the chances of intercranial hemorrhage or retinopathy but increase in chances of sepsis.

The diet rich in vitamin is essential for well-being. Vitamin involves number of health benefits which is essential to be active and strong. Along with the properties, Vitamin E is considered to be the remarkable. We are known to the benefits of Vitamin E for skin but it is equally essential for maintaining cardiovascular health. Being one of the most required vitamins for maintaining and enhancing eye health and also prevents the chances of macular degeneration and cataracts. Vitamin E helps to combat factors contributing neurological problems. So due to this beauticians and physicians put emphasis on diet rich in Vitamin E.

The skin with fine lines and wrinkles are a nightmare especially for women. They spend half of their earnings on anti-aging products which are loaded with harsh chemicals though they do not provide satisfactory results and should not be trusted blindly. The skin requires moisture to remain young and wrinkle free. This is the main reason that beauticians suggest to incorporate foods loaded with Vitamin E. Loaded with antioxidants, it contributes to the growth of collagen that is known for adding elasticity to skin by making it young and smooth.

People nowadays stare computer screen all the day and use smartphone before going to bed which decreases eye health and leads to long term discomfort as well as diseases. Vitamin E consumption does wonder to eye health as it is able to keep eyes healthy from developing symptoms related to cataracts. Studies have confirmed that Vitamin E with zeaxanthin and lutein delays formation of cataracts and early macular degeneration.

As the person ages, memory loss and cognitive decline are common but it could be delayed with the consumption of diet rich in Vitamin E. Recent studies showed that it is beneficial for treating Alzheimer’s disease.

Heart diseases should be monitored time to time. Negligence could lead to severe cardiovascular ailments. Vitamin E helps to keep arteries healthy along with preventing the chances of having future heart problems. It expands blood vessels which is essential for keeping the proper blood flow in the body.

Immune system combats infectious bacteria and prevents fever, diarrhea, cod and cough. Add Vitamin E to the diet to strengthen immune system. It also assists the growth of cells which is required by the body for destroying germs and cancerous cells. It promotes the growth of B-cells which form antibodies that are known to destroy bacteria.

Damaged tissues and skin cells forms scars which are not attractive. Sometimes, these scars take longer time period to heal. Vitamin E has healing properties which repairs damaged cells due to its curative properties. Furthermore, it is safe for bruises and burns. The skin absorbs these nutrients and the scars begin to fade gradually.

Blood clot in arteries is harmful as it results in severe health problems such as cardiac arrest and enhances susceptibility to stroke. The clots in vein could cause pulmonary embolism if reached to lungs. Vitamin E acts as a blood thinner for preventing blood platelets to combine together and transform into clots. Add vitamin E to the diet for avoiding these health problems.

Vitamin E counteracts harmful free radicals and with its antioxidant properties, it prevents early aging by reducing the chances of gray hair. Many reasons such as smoking, poor diet and iron deficiency could be the reason for damaged and gray hair but adding Vitamin E to the diet helps to combat this condition. It is able to counteract factors which are the cause for gray hair promoting the growth of healthy dark hair again.

Besides skin and hair, nails and hands also required to be nourished. Vitamin E is well known for its moisturizing properties. Its use keeps the hands smooth and flawless. It is a great way for restoring trans-epidermal water loss to skin. Apply vitamin E with regular lotion for dry hands. For healthy and stronger nails, soak nails into Vitamin E essential oil regularly.

What Foods Are Good Sources of Vitamin E?

How Much Vitamin E Do We Need Daily?

The recommended daily intake (RDA) for men and women of all ages is 15 milligrams (or 22.5 IU) of vitamin E daily. This is also the recommended level during pregnancy while the RDA is increased to 19 milligrams during lactation.

What Happens If Too Little Vitamin E Is Consumed?

Vitamin E deficiency is somewhat rare in adults with the exception of those who have medical conditions that impact the normal digestion of lipids. Any situation in which normal fat digestion and absorption are hindered can ultimately reduce the amount of vitamin E absorbed from the digestive tract. A deficiency may take many months or years to show itself through medical symptoms such as red blood cell fragility and neurological abnormalities. Usually the medical condition is treated long before vitamin E deficiency signs are recognized. However, children with cystic fibrosis are a special concern, as the pancreas produces inadequate amounts of digestive enzymes in those with this disease.

Compared with the fat-soluble vitamins discussed so far, vitamin E is relatively nontoxic. However, studies on people eating fifty to one hundred times the RDA have demonstrated that these amounts can result in nausea, diarrhea, and headaches, while some individuals complained of general weakness and fatigue. It should be recognized that excessive vitamin E supplementation may interfere with vitamin K’s activity in blood clotting.

Safety and side effects